I don’t have a lot of pictures to show for today because today was more refining and shaping. There’s a lot of that.

We started out in the morning on the belt grinders, with 80 grit sandpaper, touching up any areas of imbalance/unevenness we could find. I found that, during the night, my brain had apparently re-trained itself a bit and had figured out how to map my hand position to the contact-point on the belt. If you’ve ever switched from using a mouse to an art tablet pen or a trackball, and experienced a few days of awkwardness followed by a sudden “click” – that’s what it felt like. My first grind lines this morning were laid right where I wanted them, and so were the second, third and subsequent. I even worked up the courage to grind the tip, and made it better instead of worse. That felt good. Really good.

Part of the key is taking plenty of breaks – if you just stare at it too long your brain starts to shut down and it gets easy to just grind thoughtlessly and make a mistake. I switched back and forth between touch-up grinding and filing the tang to clean it up.

Then we had lunch and started on the wet stones. It seems that, once the quench is done, our interaction with the blade (until it’s time for mountings) is successively finer and finer grindings until it’s ready to go to a sword polisher. By the way, if any of you are young enough to invest the time, very patient, and steady, and want a good job: there is a shortage of sword polishers, and an abundance of swords that need polishing. 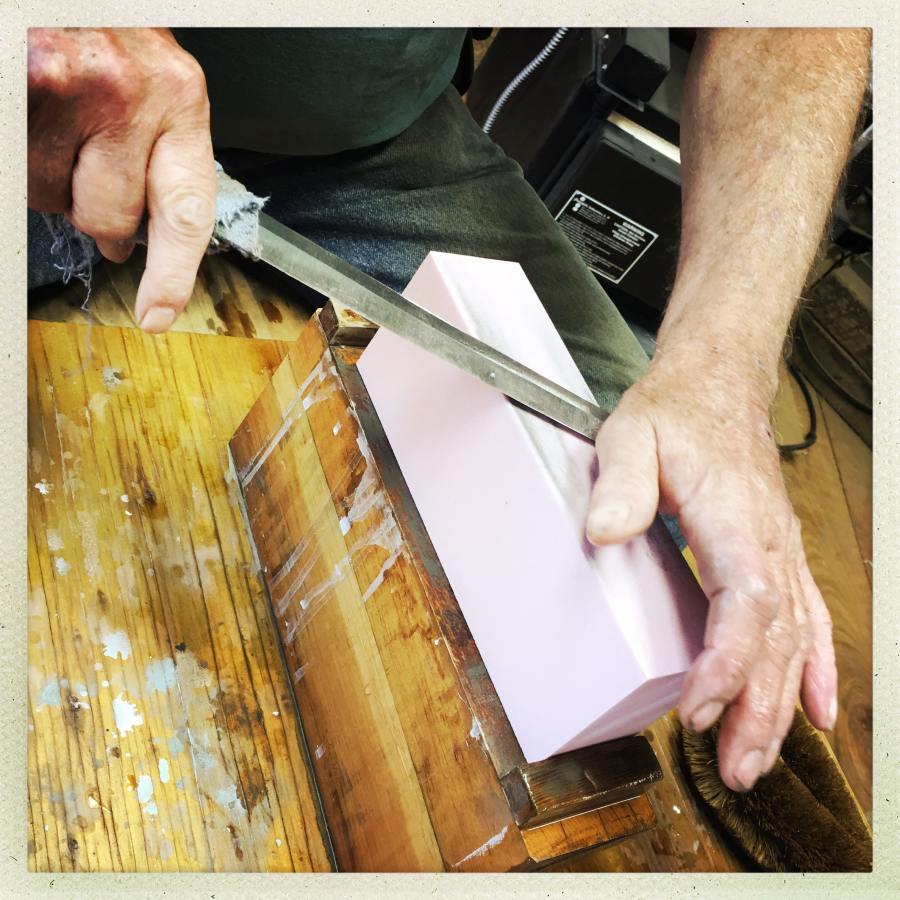 Michael Bell’s hands, demonstrating use of water stone to grind Shinogi of my blade

Wet stone grinding starts at 240 grit, then moves to 800 grit, and 2000 grit. The last grinding we’d do would be 6000 grit. Each successive stone refines and sharpens the lines and removes the scratches from the previous. It took about 4 hours to do the 240 grit grind over the entire blade, checking constantly for any scratches that might have been missed; as the stones get finer, a missed scratch takes longer to grind out as the stones are removing less metal.

I’ve had a variety of wet stones over the years, and for the last decade have been using diamond-impregnated stainless steel blocks that I used to buy from Woodworkers’. They’re great because the surface of the block is as close to an immutable plane as you’re likely to get; but it’s exactly wrong for a samurai sword, because the plane of the stone needs to curve slightly or you’ll wind up with facets in the blade. So, I was quite uncomfortable to see how rapidly and thoroughly my blade took a brand new stone out of shape. The steel is tough! It’s also really interesting how quickly your hand learns the feeling/resonant frequency of the hardened edge or the softer back. You can tell right away where you are and what you’re doing. Finally, I scraped up the courage to work on the tip, and I thought I did a credible job – perhaps even a good one – so we switched to the 800 grit stone. 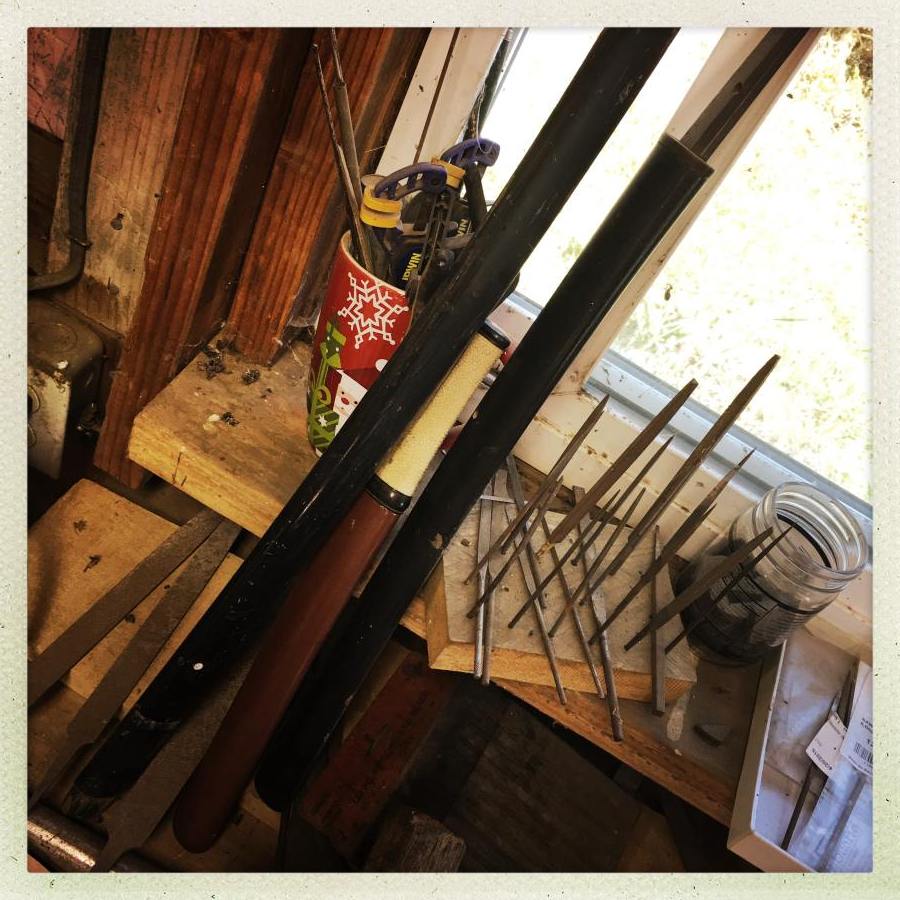 The 800 grit stone has a completely different sound/feeling from the 300 grit stone, and you hold the blade straight on to the line of travel, so you’re putting the scratches at a slightly different angle – that way you aren’t hiding old scratches.

Traditionally, Japanese wet stones are used in a sitting posture, with a holder that reaches up and around the stone, that is held under the foot. It looks awkward but I’m sure that anyone who does it long enough is comfortable doing it that way. We were using some upright benches with a block holder and a sort of wide tray where we could put water, rags, etc. I may build myself one (looks like an easy build) and leave it on my porch; I can imagine that an hour of sword-grinding at sunset might be a nice form of meditation. It makes me a bit wistful because I know that’s exactly the sort of thing my dogs would have enjoyed; they were very helpful and joined me for my “dusk beer” or “sunset wine” every night I was home. Winter is coming, though, so I may leave the blade wrapped and waiting until spring. 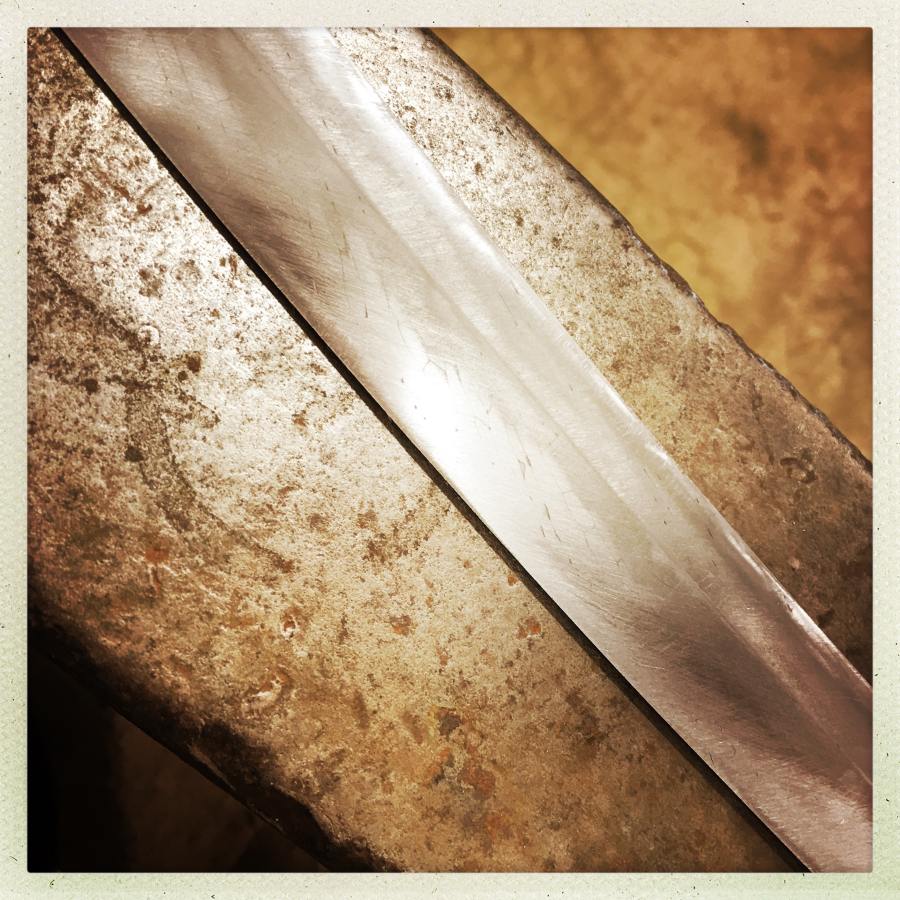 When you start to grind with a different stone, at a different angle, there is a brief period where the blade goes all “fugly” – it looks like it’s covered with patchy white spots where the angle of reflection has changed. In the picture above, the scratches that are at an approximately 45-degree angle are from the 300 grit stone. The bright whitish patches on the Shinogi are from the 800 grit stone, and the edge is beginning to show a bit of temper-line (Hamon) as well as the pattern of welded wires. Those have almost a snakeskin-like look; they’re not cracks they’re the interfaces between the different piece of steel where they melted together. When I did the clay for the quench I made it deliberately a bit messy because that’s a style of temper-line I like.

By about 4:30, I had gotten my blade to that stage, and it was time to stop and pack up and say some goodbyes. The blades were oiled and wrapped in newspaper, the wet stones (I bought the right grits to finish the blade) went in my bag, email addresses were exchanged, hands shaken, and dogs said goodbye to.

It’s going to take a few months for everything to sink in; this has been a very stimulating week – technically, emotionally, mentally, artistically, creatively. The Bell family are interesting and utterly charming, and are very good, unassuming, and gracious teachers. It was easy to feel like I knew what I was doing, which I know I did not, and that’s one of the hallmarks of good instruction. Being in a remote location far from home, so tightly focused on what we were doing, formed a kind of time-bubble of steel and roaring heat, coffee, good food, conversation, and a free-wheeling mix of art and engineering – a hugely energizing and inspiring week. It’s going to feel so strange going to the airport tomorrow, back to the humdrum of homeland security and departure lounges.

I do feel like I have learned the secret of Japanese sword-making: hard work.

As the blade continues to get thinner, it eventually begins to get sharp in spots along the edge. Right after I started with the 800 grit, it began to get sharp near where the blade meets the tang; it’s already sharper than most of my casual cooking knives.