It is essential to the American myth that North America was wilderness when the European colonists began to arrive. Sure, there were people, but they weren’t ‘civilized’ and therefore didn’t count; they could be brushed aside.

Charles C. Mann’s 1491 [amazon] and its sequel 1493 [amazon] oppose that myth. He can only hint at the complexity of the politics of the era but it’s overwhelming. Of course it is, it’s people doing the things people do. 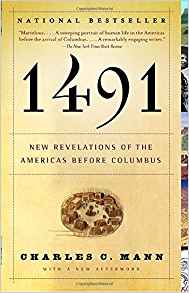 Mann invites us to an imaginary flyover of all the civilizations that are flourishing and dying in the Americas prior to Columbus:

By the early 1990s Folan’s team had learned that this long-ignored place covered as much as twenty-five square miles and had thousands of buildings and dozens of reservoirs and canals. It was the biggest-ever Maya polity. Researchers cleaned and photographed its hundred-plus monuments – and just in time, for epigraphers (scholars of ancient writing) had in the meantime deciphered Maya heiroglyphics. In 1994 they identified the city-state’s ancient name: Kaan, the Kingdom of the Snake. Six years later they discovered that Kaan was the focus of a devastating war that convulsed the Maya city-state for more than a century. And Kaan is just one of the score of Maya settlements that in the last few decades have been investigated for the first time.

A collection of about five dozen kingdoms and city-states in a network of alliances and feuds as convoluted as those of seventeenth century Germany, the Maya realm was home to one of the world’s most intellectually sophisticated cultures. About a century before our imagined surveillance tour, though, the Maya heartland entered a kind of Dark Ages. Many of the greatest cities emptied, as did much of the countryside around them.

Incredibly, some of the last inscriptions are gibberish, as if scribes had lost the knowledge of writing and were reduced to meaningless imitation of their ancestors. By the time of our overflight half or more of what had once been the flourishing land of the Maya was abandoned.

Some natural scientists attribute this collapse, close in time to that of Wari and Tiwanaku, to a massive drought. The Maya, packed by the millions into land poorly suited for intensive farming, were dangerously close to surpassing the capacity of their ecosystems. The drought, possibly caused by a mega-Nino, pushed the society, already so close to the edge, over the cliff.

Such scenarios resonate with contemporary ecological fears, helping to make them more popular outside the academy. Within the academy, skepticism is more common. The archeological record shows that southern Yucatan was abandoned, while Maya cities in the northern part of the peninsula soldiered on or even grew. Particularly, the abandoned land was the wettest – with its rivers, lakes, and rainforest, it should have been the best place to wait out a drought. Conversely, northern Yucatan was dry and rocky. The question is why people would have fled from drought to lands that would have been even more badly affected.

And what of the rest of Mesoamerica? As the flight continues north, look west, at the hills of what are now the Mexican states of Oaxaca and Guerrero. Here are the quarrelsome city-states of the Nudzahui (Mixtec), finally overwhelming the Zapotec, their ancient rivals based in the valley city of Monte Alban. Further north, expanding their empire in a hot-brained hurry, are the Toltec, sweeping in every direction from the mile-high basin that today houses Mexico City. As is often the case, the Toltec’s rapid military success led to political strife. A Shakespearean struggle at the top, complete with accusations of drunkenness and incest, forced out the long-ruling king, Topiltzin Quetzalcoatl, in (probably) 987AD. He fled with boatloads of loyalists to the Yucatan Peninsula, promising to return. By the time of our plane trip, Quetzalcoatl had apparently conquered the Mayan city of Chichen Itza and was rebuilding it in his own Toltec image. (Prominent archeologists disagree with eachother about these events, but the murals and embossed plates at Chichen Itza that depict a Toltec army bloodily destroying a Maya force are hard to dismiss.)

Continue the flight to what is now the U.S. Southwest, past desert farms and cliff dwellings, to the Mississippian societies in the Midwest. Not long ago archeologists with new techniques unraveled the tragedy of Cahokia, near modern St. Louis, which was once the greatest population center north of the Rio Grande. Construction began around 1000AD on an earthen structure that would eventually cover fifteen acres and rise to a height of about a hundred feet, higher than anything around it for miles. Atop the mound was the temple for the divine kings, who arranged for the weather to favor agriculture. As if to lend them support, fields of maize rippled out from the mound almost as far as the eye could see. Despite this apparent evidence of their power, Cahokia’s rulers were setting themselves up for future trouble. By mining the forests upstream for firewood and floating the logs down to the city, they were removing ground cover and increasing the likelihood of catastrophic floods. When these came, as they later did, kings who gained their legitimacy from their claims to control the weather would face angry questioning from their subjects.

Continue north, to the least settled land, the realm of hunters and gatherers. Portrayed in countless U.S. history books and Hollywood westerns, the Indians of the Great Plains are the most familiar to non-scholars. Demographically speaking, they lived in the hinterlands, remote and thinly settled; their lives were as far from Wari and Toltec lords as the nomads of Siberia were from the grandees of Beiling. Their material cultures were simpler, too – no writing, no stone plazas, no massive temples – though Plains groups did leave behind about fifty rings of rock that are reminiscent of Stonehenge. The relative lack of material goods has led some to regard these groups as exemplifying an ethic of living lightly on the land. Perhaps, but North America was a busy, talkative place. By 1000AD trade relationships had covered the continent for more than a thousand years. Mother of pearl from the Gulf of Mexico has been found in Manitoba and Lake Superior copper in Louisiana.

It serves the mythology that Columbus and the later European settlers arrived to a land that was mostly empty, or filled with low-tech savages. When I was growing up, I was skeeved out by stories of the Maya cutting out people’s hearts, but it didn’t take me long to realize that wasn’t much different from the christians setting people on fire over details of doctrine, or invading the Middle East, or eating god-canapes of transubstantiated divinity.

This is a good book to have in the back of your mind, in case you ever encounter someone who has swallowed the cultural mythology that the Americas were thinly-populated wastelands full of savages. In fact, it sounds, to me, like it was savages all the way down. Mann does a good job of framing the discussion in that direction:

This variant of Holmberg’s mistake dates back to the Pilgrims themselves, who ascribed the lack of effective native resistance to the will of God. “Divine providence,” the colonist Daniel Gookin wrote, favored “the quiet and peaceable settlement of the English.” Later writers tended to attribute European success not to European deities but to European technology. In a contest where only one side had rifles and cannons, historians said, the other side’s motives were irrelevant. By the end of the nineteenth century, the Indians of the Northeast were thought of as rapidly fading background details in the saga of the United States – “Marginal people who were losers in the end,” as James Axtell of the College of William and Mary dryly put it in an interview. Vietnam War-era denunciations of the Pilgrims as imperialist or racist simply replicated the error in a new form. Whether the cause was the Pilgrim god, Pilgrim guns, or Pilgrim greed, native losses were foreordained; Indians could not have stopped colonization, in this view, and they hardly tried. 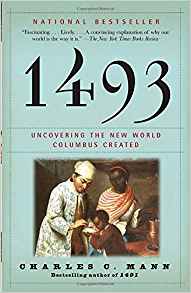 Mann’s view of the Indians’ reactions to the European invasion makes more sense – he explains that they were intelligent, rational people who had significant politics. They attempted to use the Europeans, and the Europeans to use them, and the end result was that “divide, and rule” coupled with technology (which was carefully controlled) won out. As someone who grew up indoctrinated with the myth of the dumb savage, I find myself cringing at the description of Indians who were content to trade for beads and glass – of course they were – but much as part of a process of opening trade with an aim toward getting military technology. They were not dumb savages at all. In fact the Indians viewed them as ignorant savages who were ugly, dressed badly for the climate, and smelled terrible.

I found the second book by Mann to be equally interesting; he frames out the effect of American diseases on the European settlers, and why malaria had such an influence on the rise of slavery: black slaves from Africa could survive malaria better than the European settlers, who died in huge numbers. The Africans’ good luck was their bad luck.

The obvious thing to do is to read both books back-to-back. Mann’s writing is fluid and light, it’s very readable.

Obviously, this posting is timed for Columbus day. I don’t think there’s much worth saying about that other than “why do people still celebrate Columbus day?”

BTW, I know that some of the names like Yucatan and Chichen Itza are supposed to have various accents on them. Unfortunately, the WordPress instance FTB is running has a Latin/UTF-8 encoding configuration problem that I can’t fix (and am not included to understand) so – sometimes accents get turned into weird garbage and I leave them out.