I’m not entirely sure if this is serious.

The International Journal of Science, Spirituality, Business and Technology (IJSSBT) is an excellent, intellectual, peer reviewed journal that takes scholarly approach in creating, developing, integrating, sharing and applying knowledge about all the fields of study in Engineering, Spirituality, Management and Science for the benefit of humanity and the profession. [ijssbt]

In a postscript in one of my previous postings [stderr] I mentioned the weird Japanese ‘science’ of mapping blood types to personality, under “discredited fields” of study. Thinking it might be an interesting paper to review, I searched for the original 1927 paper by Takeji Furukawa – expecting the usual sort of eugenicist slop – but google dropped me this, as well: 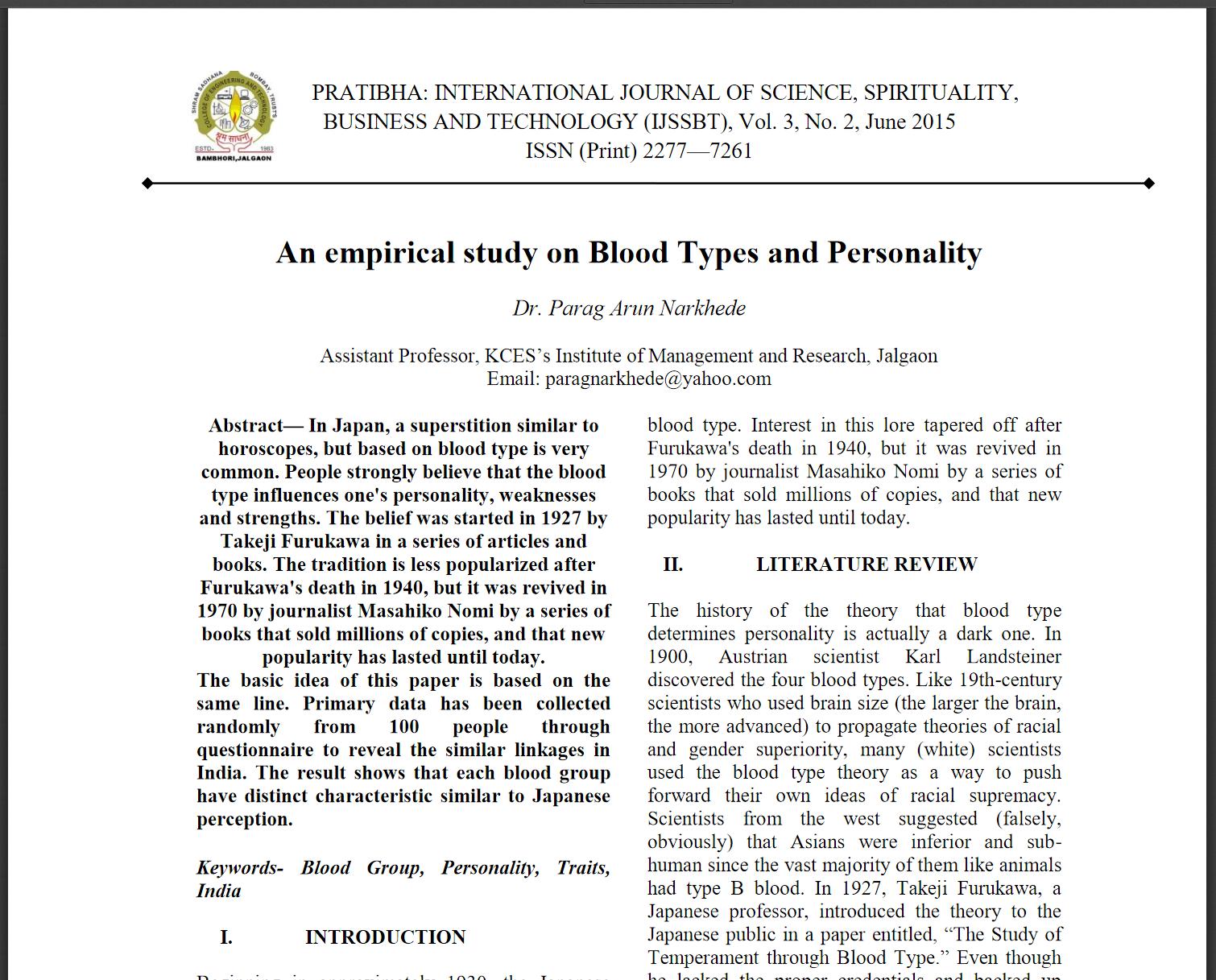 Note the title: “An empirical study on Blood Types and Personality.”  Empirical sounds impressive! But, from here, it looks like an empirical study of self-reported subjective opinions from a biased sample. It does appear that we are dealing with actual measurements of something, but the question is “what?”

IV. METHODOLOGY
The basic intention of this paper is to correlate & compare this Japanese philosophy with Indian Blood Traits. As a pilot study Questionnaire was prepared considering different traits of personality along with annual income, Blood group and occupation of respondents. The questionnaire is distributed among 100 respondents to take their feedback out of which 90 responses have taken into consideration for further analysis. The data analysis has been done with the help of IBM PASW software using cross tabulation.

I’m not as interested in the software that they used as I am in the survey methodology.

With 100 respondents, there’d be a 4% chance of getting an AB (positive or negative) respondent, AB being a fairly uncommon blood type across the human population. The data tabulated in the paper indicate that there were 14 AB respondents; that’s a pretty unusual sample set! But inside the survey are more unusual bits of crunchy something – one of the hardest parts of a social science study is coming up with a survey that doesn’t bias the responses. In this case, since ‘Job’ overlaps the other occupations, how do we know that the respondent didn’t work in ‘Industry’ but put ‘Job’ because that’s what they read first? This is quibble, really, the whole study is an example of “find the flaws in our study.”

In computing, we have an expression “garbage in, garbage out” that applies to a lot of studies, especially this one.

VI. CONCLUSION
The findings shows that each blood group have distinct characteristic, the finding may somehow differs from Japanese studies, but Indian culture, regional diversity, religion characteristic and poor family conditions have significant contributions in shaping individual personality. The characteristic of blood group with respect to personality as per the findings are –
Type O: A person belongs to  O blood type are the social butterflies. Often popular and self-confident, very creative personalities and always seem to be the center of attention. Always make a good impression on people and you‘re often quite attractive. Organized and determined, their persistence will helps to reach their goals. These people are good leaders & prefer to live in peaceful or friendly environment.

This is an absurd example of a bad social science paper, but it illustrates one of the inherent problems in measuring something when there are multiple factors that may influence an outcome. It also illustrates one of the problems of asking for “peer reviewed papers” – who are the peers and how well did they understand the material?

I think that the only thing I’d be willing to conclude from this paper is that 9/10 of the author’s friends can fill out a survey. Assuming he didn’t just plug numbers in.

If there were 100 surveys given out, why are there only 90 responses?

Also: how were the survey respondents determined? Was it a bunch of undergraduates responding to the survey in return for a cookie? Was the sample group randomized.

In Which I Catch Putin in a Cold Lie » « Vendredi Voltaire: Climate