Here we will use the translation of Abbe Dellisle, of which the elegance is worthy of its difficulty. 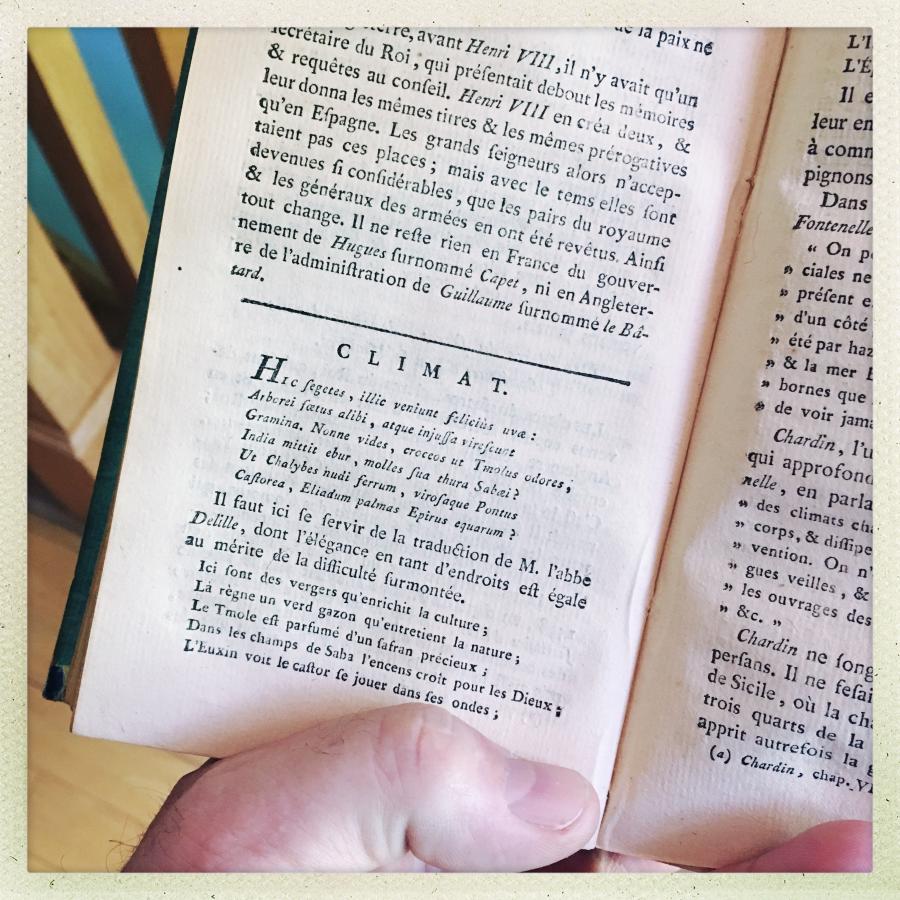 “Here are the orchards that make a wealthy culture;
The reign of green grass that maintains nature;
the soil is perfumed with a precious saffron;
in the fields of Saba that the ancients thought were for the divine;
The Black Sea has beavers playing upon its waves;
Pontus prides itself on its plentiful mines;
India produces ivory; and warriors in its fields
Epirus exercises coursers for Lydia.”

It is certain that the land and sky affect any nation’s products of nature, beginning with man and ending with mushrooms.

Climate’s influence on religion is apparent in its use and ceremonies. A lawgiver would barely need to require Indians to bathe in the Ganges at certain times of the lunar cycle; it’s a great pleasure for them. Yet, if you proposed the same bath to the people who live along the Dwina River near Arkanghelsk, it would go poorly. Forbid pork-eating to an arab and he’ll tell you he’d get leprosy from eating that unclean meat, which is disgusting in his country. Say the same thing to a Westphalian and he will try to beat you up.

OK, that one was hard! For one thing, I mis-translated “climat” as “climate” while deciding what to translate. Of course, I was thinking “climate change” but the word as Voltaire is defining it is more akin to “culture” or a sense of place.

Voltaire was a great cultural relativist: he often contrasts attitudes in different parts of the world against eachother, to illustrate how moral imperatives or cultural practices are not absolute. In my opinion, that’s one of the great things about Voltaire – he was always standing by with a hot needle of skeptical enquiry, ready to pop some exceptionalist’s balloon. In his other writings, he uses a Huron (“L’ingénu”)[wikipedia] as a cultural foil to illustrate some of the silliness of ‘civilization’, and a 100,000 foot-tall space alien from Sirius (“Micromégas”)[wikipedia] who comments on the relative insignificance of human activities – likening us to bacteria. (Yes, Voltaire wrote one of the first science fiction novels.) In my favorite scene in Micromégas, the Sirian and a Saturnian friend manage to talk to some humans, only to discover that the humans believe the universe was made for them; hilarity ensues.