Willie Sutton said you rob banks because “that’s where the money is.” Well, what if you’re looking for wood?

That’s right: you go to a sawmill.

A few months ago a fellow dropped by to ask me if I was interested in selling any timber trees. I wound up asking him whether he knew any sawmills in the area that do art woods. That came up dry, but he gave me the number of the boss of a sawmill, who I called and talked to, and that guy gave me the name of another sawmill boss who “does all kinds of stuff on demand.” So, I tracked him down and explained that I was a wood-turner and project-doer and was looking for wood for bowls and stock lumber for art projects – specifically, quarter-sawn red oak.

Yesterday, I went to visit!

Sawmills are interesting: they’re usually a small area of activity where the trunks are sectioned, and then a couple kilns, maybe a shed, and piles of wood. Yes, it does smell great. They had just finished sectioning a big cedar log a few days earlier so the place smelled like a bath bomb.

As it turned out, this mill operation (Hemlock Hollow sawmill, in Tivoli PA)[hh] has a reputation as being a place that’ll saw exotic stuff, so people bring them exotic logs, which further burnishes their reputation, etc. I admit I was gobsmacked by some of the slabs of material they had stacked and drying – live-edge 2″ thick 20″x24″ slabs of apple or 10 foot long 2″ thick slabs of 12″ cedar. Casually, there was a table-top made out of a 3′ x 2′ 2″ thick slab of solid black walnut. See what I mean with the Willie Sutton analogy? 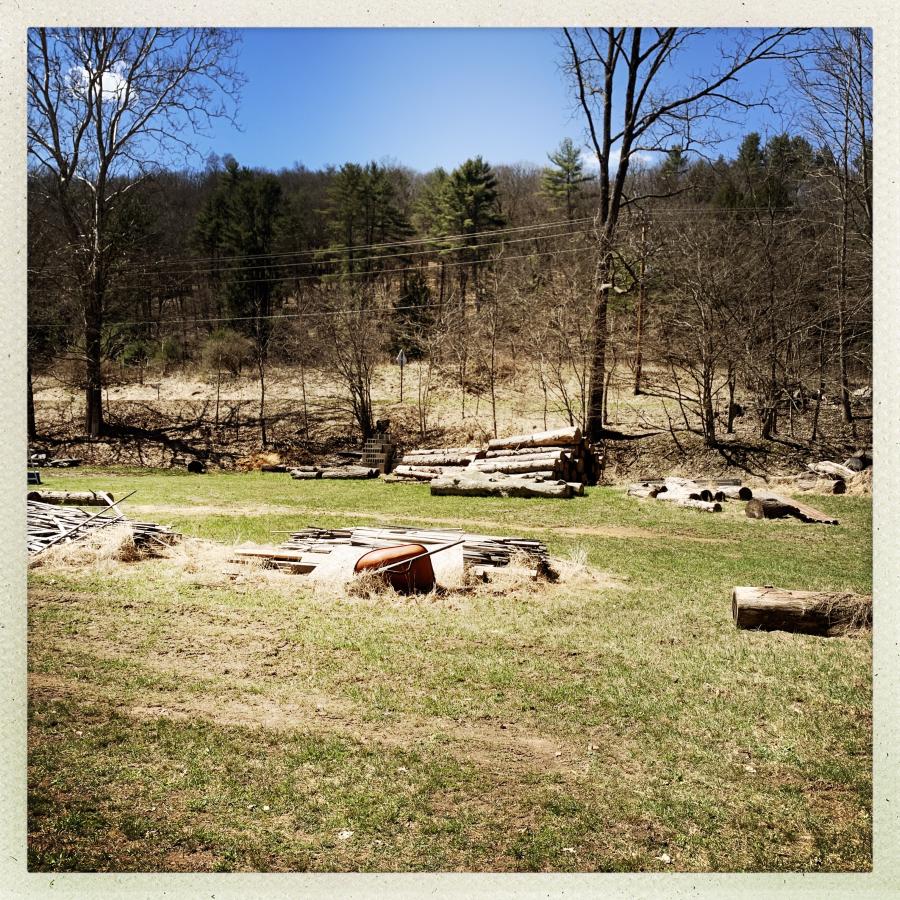 I didn’t take pictures, specifically, of the saw because saws aren’t that interesting to me. But you can imagine the design: 2 rails with a slider that carries the log forward to a big horizontal or vertical bandsaw. Then, a power system for the bandsaw, and a driver for the slider. After that, you need something to move the logs, which is either a backhoe or skid-steer or bulldozer with forks. In this case, it’s a backhoe with a forks and the hoe-arm and a tow chain. It’s not a low-end operation but, seriously, you don’t need a huge amount of infrastructure once you’ve paid for the saw. [No, I will not be getting into milling] 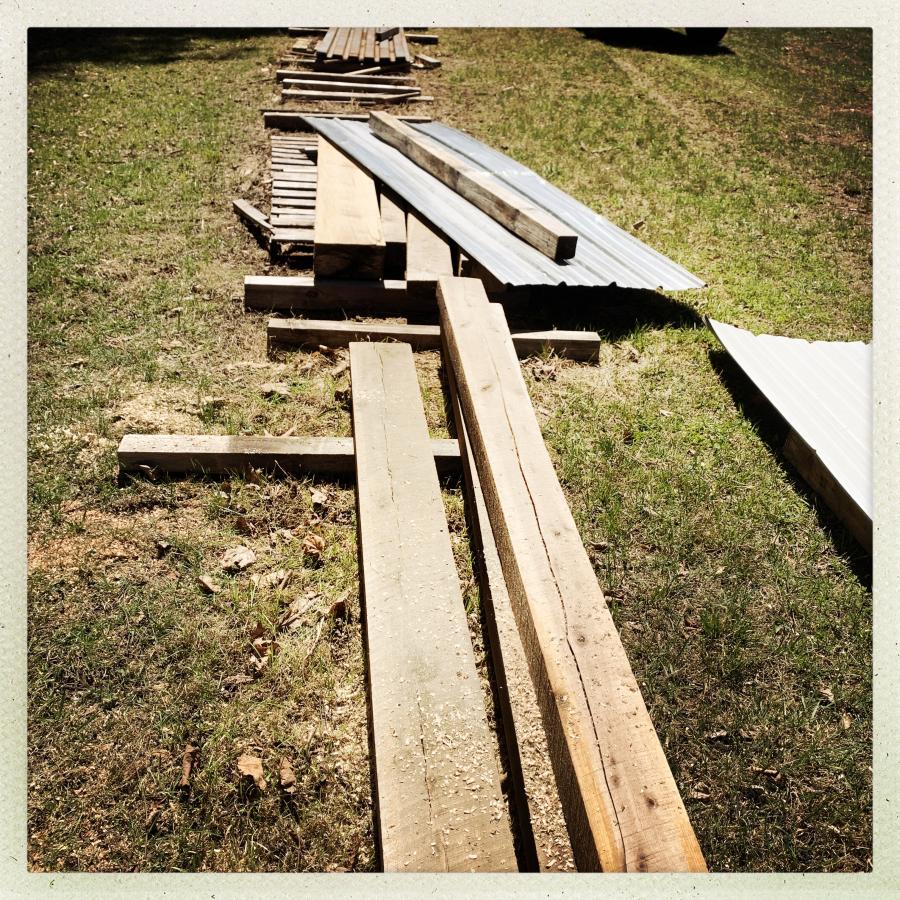 Now, in the picture above it doesn’t look like much but – that’s solid maple, 8″ wide and 5″ thick. Look at the beam on the upper stack to see what I mean. It’s been sitting there drying for over a decade so it’s light, lightly spalted (aka: rotted) and some of the pieces have crazy grain in them. They cut two of those beams into 3 foot sections for me and we loaded them into my car. 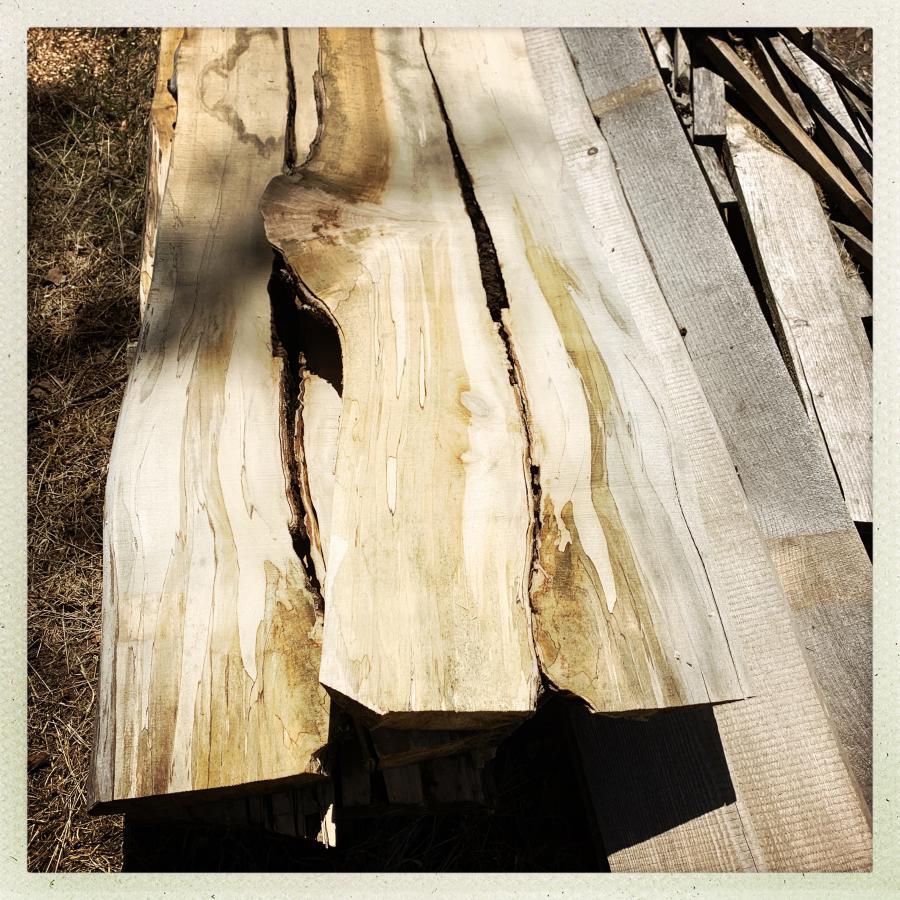 “Oh you want live edge and burl? How about these maple slabs? Give me $25 apiece for them…”

Meanwhile, we were negotiating the set-up for them to part me out a red oak trunk. They have a trunk or two already, it’s just a matter of my coming down and we’ll explore the wood grain together to figure out the cuts. Usually a sawmill cuts the wood to get the most board-feet but I’m interested in getting the most crazy grain. 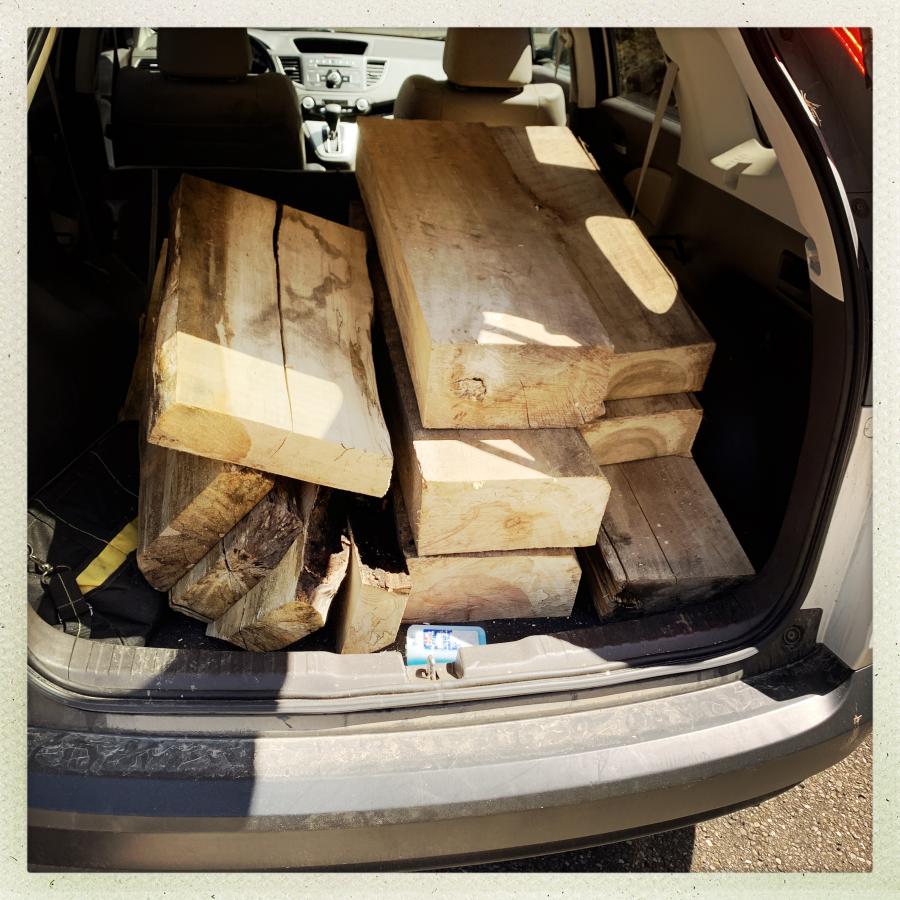 Right there is a couple years’ supply of wood. But, see, I own an old amish-built hay barn from the 1890s, which is designed so that air will flow through it to keep the hay from composting. It is, basically, a giant wood-drier. Storing a whole tree in there will not be a problem, other than the grunting and cursing part – wet oak is heavy. I am an expert at moving heavy things, though, and in the case of a stack of wet boards that means “a bit at a time.” I can park my pickup truck with a bed full of wood right inside the barn and work on emptying it a little every day. My little Honda CR-V is not such a great logging wagon. 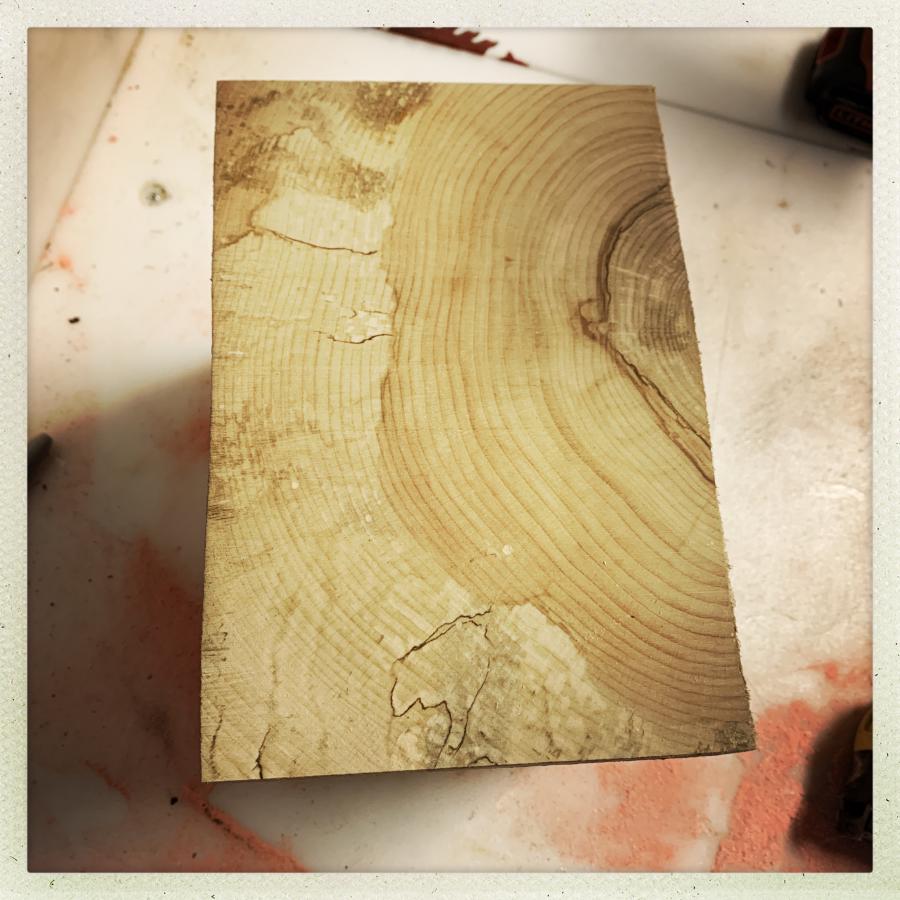 All of the maple beams disappeared into the barn except for one piece of the spalted stuff, and a 3-foot chunk of one of the beams. The bandsaw went through it just fine after I set up a roller-stand to keep the end of the beam from flipping off the table, and that’s what it looks like inside.

There is still a huge distance to go with this stuff. Wood that is spalted/punky is dangerous to work on unless it’s stabilized somehow, which usually means cutting a bowl blank and rough-shaping it then giving it a vacuum soak in water-light poly resin, baking it, and then finishing the piece. It’s just steps, though, which can be done asynchronously. If I were a professional operation I’d do this assembly-line style – one day a week, do the vacuum soaking and baking and setting up blanks, and 5 days a week turning them down, but I don’t have to care and I know that the wood isn’t going anywhere.

It Always Comes Out, Eventually » « They’re At It Again