Reveal has an important episode dealing with the republican “stop the steal” campaign, [reveal] and other lies that went mainstream and blossomed.

I feel as though the episode would be better if they split the beginning off on its own and went deeper into that content; as they continue I feel like it trails off into the weeds a bit becoming, “people believe lies.” The beginning is the interesting bit – it’s when they talk about the evolution of the “stop the steal” campaign. One thing I learned from that episode is that the “stop the steal” campaign was fully geared-up before 2016 when Trump expected to lose to Hillary Clinton and was prepared to contest the vote. Remembering back, as Reveal takes us, Trump was saying that he would maybe not accept a loss in 2016 – his campaign was already preparing and floating the story of fraudulent voting machines and software vote-manipulation layers from Hugo Chavez and Leon Trotsky, etc. This was while the Trump campaign was trying to encourage Russian involvement in their propaganda campaign, which the FBI director was piously amplifying for them. But, I did not realize that “stop the steal” 2016 was a dry-run; they didn’t know they’d be looking at a losing election in 2020, but by the time 2020 rolled around, they were ready. It’s fascinating to me: all the key players were there, in place, in 2016 – Roger Stone and local republican “operatives” and poll-watchers. Again: 2016, not 2020. The complaints they were making in 2020 were written in 2016.

And sure enough, Reveal is correct. According to the April 15 edition of Colorado Public Radio [cpr] Trump’s mobs and operatives were already running the script:

Trump however has not backed off his criticism of the Colorado process. In an op-ed in the Wall Street Journal, Thursday Trump again excoriated the state party for canceling the straw poll and holding “an ‘election’ without voters.”

“What we are seeing now is not a proper use of the rules, but a flagrant abuse of the rules,” Trump wrote. “Delegates are supposed to reflect the decisions of voters, but the system is being rigged by party operatives.”

We have been allowed to forget that series of events, unfortunately because (in large part) the media and the democrats went howling after the “Russian involvement” story – retrospectively a stupid red-herring (even though it was true) compared to the real story which is the Director of the FBI’s personal involvement in throwing as much shit at the Clinton campaign as he could come up with. And, retrospectively, it was pretty thin shit, and pretty obvious – but at the time it seemed somehow like typical campaigning because everyone expected Hillary to win. And, she did, of course, but the popular vote was nullified (AKA: “stolen”) by the electoral college. 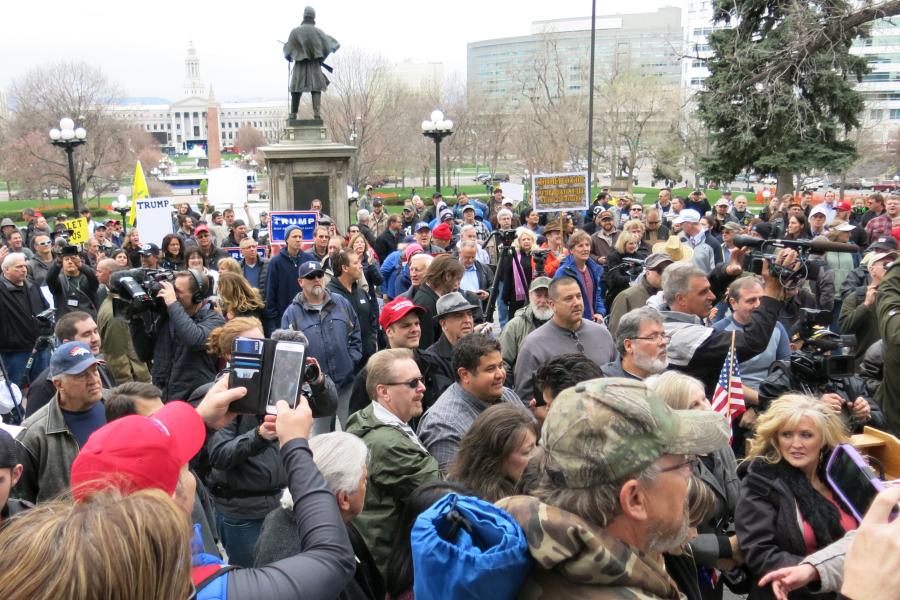 [Yes, by the way, that statue is of a confederate soldier; it has since been pulled down]

Reveal presents a fascinating time-line of the “stop the steal” meme and I don’t think I should transcribe it all here.

stopthesteal.org was set up by the Trump campaign’s operatives, initially to complain about the republican party’s (failed) attempt to block Trump’s nomination. But the memes are the same.

From the start, “stop the steal” was a group of activists and a set of tactics. In Colorado it started at the caucus that Saturday, when Ted Cruz won all the state’s republican delegates. Donald Trump started complaining…

… and continues complaining to this day. Reading between the lines is the ugly reality that Trump never had any interest in pursuing a democratic process. His organization’s plan to gain political power was always that of German and Italian fascists in the 1930s: lie about the opposition, destroy faith in the electoral process, and prepare for a police-led coup if necessary. Trump was always an open book. I expect that when the history of this time is written, someone – probably from The New York Times will admit that they knew the republicans had no intention of taking a defeat fairly, and that is why people kept asking Trump if he’d accept a negative election result. He kept indicating fairly clearly that he would not. The great father of many lies was not even interested in lying about that. The media and the democrats kept harping on the Russia angle, ignoring the much more important and interesting story – they should have already been beginning investigations into electoral fraud (election campaigns paying to assemble armed crowds outside of government offices is not a legal way to spend money. All of the financial strings that are obvious today in the Jan 6 investigation were put in place in 2016; there was plenty of time to get inside the republican’s operations and pick the whole thing apart but, hey, Anthony Weiner!

Give it a listen.

Then, when it’s done, think back to all the times when Trump said that two terms probably wouldn’t be enough for him. Remember those? The asshole was planning on stealing the election and being president-for-life all along.

The Guardian also has an article about the April 15 protests by crisis actors: [guard]

I will note that there are still and never have been subpoenas of communications between James Comey and the Trump campaign. Why not? Surely, we are not so naive anymore, are we? Of course, Comey’d be a pretty sophisticated information manager – one does not survive to be FBI Director by being stupid enough to write things down.