My mind plays tricks on me: I originally started to write about how Kyle Rittenhouse is “the new Walter Mitty” except then I realized that I had the name wrong; what I meant was “Bernie Goetz.”

Bernie Goetz was big news back in the 1980s. Briefly: he was a nerdy sort who felt he had been pushed around and threatened in life – which, in my experience, would be a normal part of living in crowded city like 1980’s New York – and comforted himself by carrying a gun. Then, he shot four people. His excuse was that they were scary. Naturally, I have to wonder who was scared of whom. Another aspect of Goetz’ defense was that he had been robbed on the subway three years earlier (in a documented incident) and did not feel that the police handled the robbery effectively – so, he bought a gun and the next time he was scared on the subway, he killed some people. The exact sequence of events was hotly debated and, naturally, nobody really knows exactly what happened. [wik]

At the 14th Street station, Goetz entered the car through the rearmost door, crossed the aisle and took a seat on the long bench across from the door. Canty was across the aisle from him, lying on the long bench just to the right of the door. Allen was seated to Canty’s left, on the short seat on the other side of the door. Ramseur and Cabey were seated across from the door and to Goetz’s right, on the short seat by the conductor’s cab. According to Goetz’s statement to the police approximately ten seconds later Canty asked him, “How are you doing?” Goetz responded, “Fine.” According to Goetz, the group gave signals to each other, and shortly thereafter Canty and Allen rose from their seats and moved over to the left of Goetz, blocking him off from the other passengers in the car. Canty then said, “Give me five dollars.” Goetz subsequently pulled a handgun and fired 5 shots at the four, wounding all. Canty and Ramseur testified at the criminal trial that they were begging, and had only requested the money, not demanded it. Cabey did not testify and Allen took the Fifth Amendment. 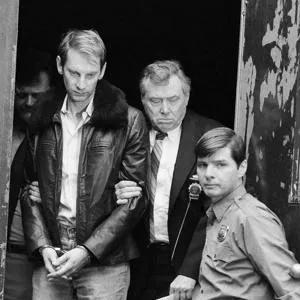 Need I mention that the four people Goetz shot were black? Because, of course, that might be relevant. Back at the time, that aspect wasn’t discussed much because it was just assumed that black men are extra scary. It’s not as if they tried to hit Goetz with a skateboard, or something like that – they asked him for $5.

Obviously, there aren’t complete similarities with the Rittenhouse case; what Rittenhouse did was more provocative and more stupid than Goetz. Goetz didn’t exactly put himself in the path of trouble, but when apparent trouble came along, he jumped right up and got into it. Rittenhouse went out of his way to get in trouble, then shot his way out of it. The whole thing is really sad, watching the proto-fascists of America rally behind Rittenhouse, who is hardly an outstanding example of masculinity, toxic, or not. He has that in common with Goetz, too. Both of their defense arguments, that they were scared of bigger healthier men, come from the depths of the same pit of toxic masculinity. They couldn’t even say they were angry, or filled with hate, or whatever – all they could muster was that they were chickenshits who reached for overwhelming force in a moment of confusion.

That, right there, is a metaphor for the US, in general: white chickenshits who just freak out and start dropping bombs or firing artillery at anyone they can convince the audience is “scary.” The entire US empire – the most powerful force that has ever existed on Earth – endlessly replays its manipulation of the population through fear. It’s going on right now; I haven’t written much about it but the warhawks in Washington are floating the idea that a nuclear war with China might be ‘necessary’ because China’s making some scary hypersonic re-entry vehicles, don’t you know? And they might be insane enough to use them, or something. It doesn’t even make sense; if they‘re insane enough to use them, what does that say about us, who have vastly superior weapons? We’re supposed to appreciate that it was legitimate self-defense for a nerdy white guy to shoot four black people with a gun and ignore the fact that a gun is overwhelming power to bring to bear against unarmed people. Or, in Rittenhouse’s case, apparently the way to respond to someone waving a skateboard at you is with rifle fire? It’s absurd, but we absorb this bullshit with our mother’s milk, as it were, in this country. Americans are so stupid that you can convince us that a dictator in Iraq, thousands of miles away, is a “threat” because, um, I dunno. Or that a North Korean dictator who has a few nuclear warheads, mostly enough to ensure that a US response would be genocide, is going to attack US vassals when it’s obvious even to a casual idiot that the North Koreans wanted nuclear weapons to deter the US, which has talked constantly about “regime change”ing them.

Researching this, I re-read Goetz’ testimony about his version of events and one thing jumped out at me: he had polished and prepared his response. He had spent time imagining and re-living exactly how he’d shoot a couple of people, and he was ready to do it the second someone gave him what passed for him as an excuse. He described how he started pulling the trigger of his gun as it came to bear, etc., like he was writing an National Rifle Association ad for how to play in your fantasy murder league. In that sense, I came to realize that Rittenhouse and Goetz were essential Americans because, to them, they were the only people present at the events that re-defined their lives and ended others. Everyone else may as well have been cardboard cut-outs. I did not read through all the testimony of the case but I wonder if anyone asked Goetz, “why didn’t you give the guy $5?” Or, for that matter, since Rittenhouse had gone to be part of a protective posse, why didn’t he just take a hit from the skateboard and have a cool scar to tell his friends about? Remember, we are living in a time when protesters are expected to take night-stick blows from cops, or get pushed down onto concrete, and not resist. Heroism, apparently is to use overwhelming force against unarmed opponents. Ain’t that America? It’s something to see. 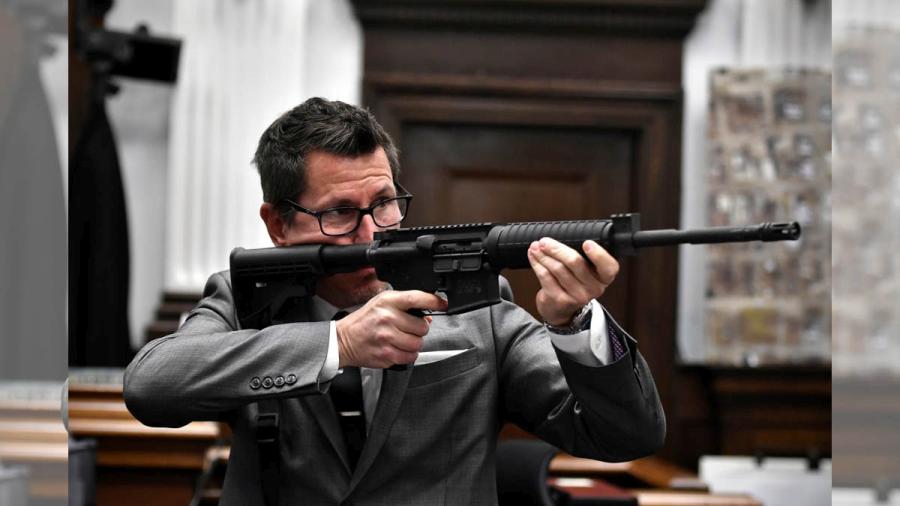 That’s the PROSECUTOR in the Rittenhouse case, showing the court that Alec Baldwin isn’t the only person who waves guns around inappropriately.

I’ve been having trouble summoning up the energy to look this reality in the face. The constant performance of politics as theater, and cowardly bluster-violence is a bit much to confront. I can’t even get started thinking about the judge in the Rittenhouse case, or even the prosecutor, whose idea of a summary argument was also to wave an AR-15 around in a courtroom – it’s hard to imagine that this is real reality, and I want to pinch (or punch) myself until I wake up.

If you know guns, take a look at the picture of the dickhead prosecutor waving the rifle. Finger on the trigger, bolt forward and locked. There’s no magazine in it, but there could be a round in the chamber. What the fuck is wrong with people in Wisconsin that they don’t know enough to take the bolt out of the rifle when they’re handing it around, or put a zip-tie through the port and the magazine well so the bolt can’t lock? And what kind of fucking ridiculous dickhead puts his finger on the trigger of a rifle that is in firing configuration in court when pointing it at the jury? I swear, if I was on the jury I’d have turned to one of the cops in the room and said (loudly) “I want to press charges for assault, on that guy – he just pointed a locked weapon at me with his finger on the trigger – that’s assault with a deadly weapon.”

Also: only assholes wear watches anymore. It’s just wealth-signaling now. Oh, and we can clearly see that his suit’s got a custom lining. It’s nice lining but that prosecutor is a joke.