Yesterday, I had a lot of reasons to think about the question of mechanical advantage involving ladders. The 40-foot extension ladder that I ordered (one has to special-order such things) finally arrived and it was time to clean out the gutter on the upper edge of my house.

In case you’ve never done it, the power curve on erecting a ladder appears to me to be non-linear. But I don’t actually know for sure; hence this posting. 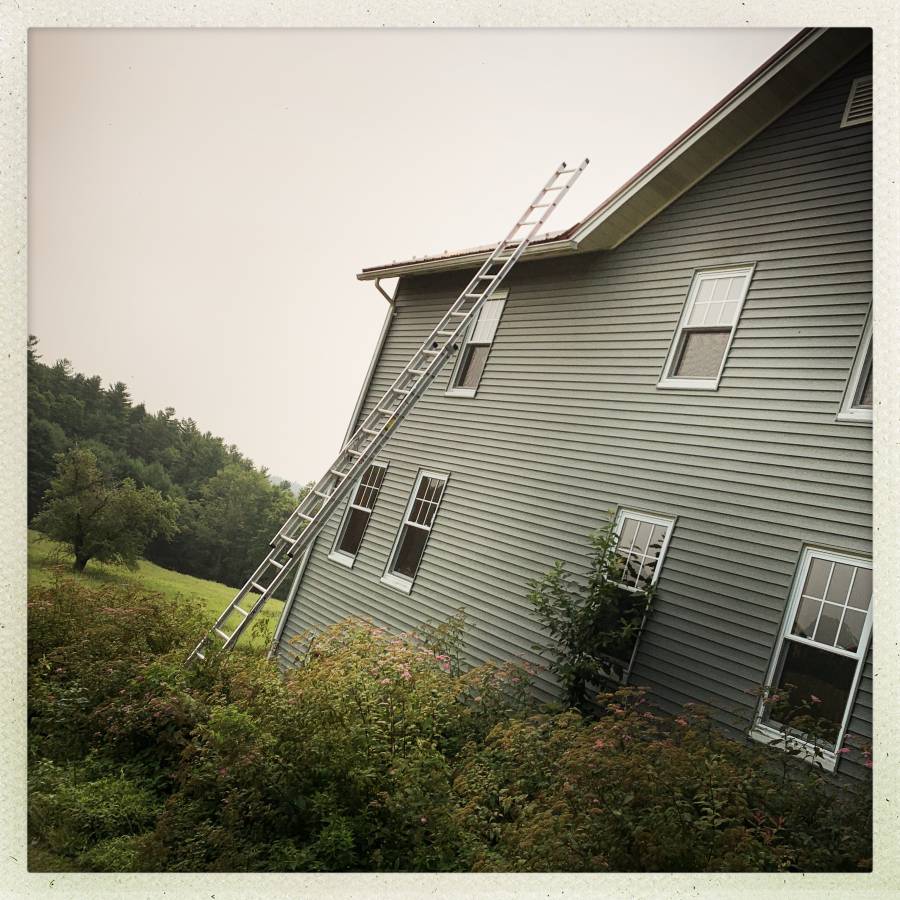 Ladders terrify me, btw. There is something about being the plumb-bob on a pendulum ride that ends in impacting a surface – brr, no thanks. Actually falling seems to be less scary but when a ladder starts slipping sideways, you’re defining an arc and (I guess?) you’ve got more distance for your fall to accelerate over.

So, I kept trying to figure out the 8th-grade physics of the mechanics of this thing. 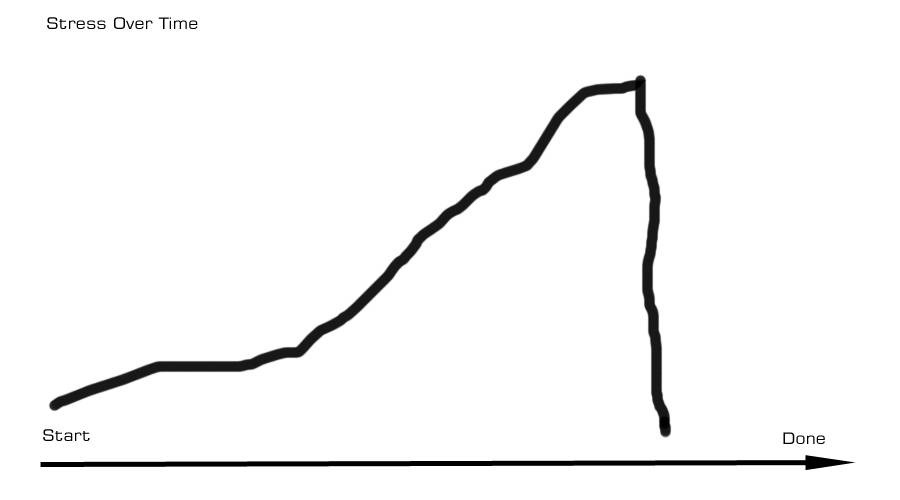 It starts out “not very heavy” then gets progressively heavier and heavier, then you have one big push where it seems you’re dead-lifting the whole damn thing, and – finally – it weighs nothing because it’s standing on its end. When it’s completely upright you can hold it upright with finger-strength because the ladder is its own fulcrum, I guess, where it contacts the ground.

I am not going to get into the part where you raise the extension by hauling on the little pulley while keeping the whole mess upright – if it starts to go, you just have to get out of its way. And leaning it against the wall isn’t great, either – you have to kind of plant your feet as a brace and let the thing tip away from you while you hold onto the pulley-rope. If you do it right, the ladder extends as it falls, and the fall is slowed by your puny weight and it does not smash a hole in your siding. 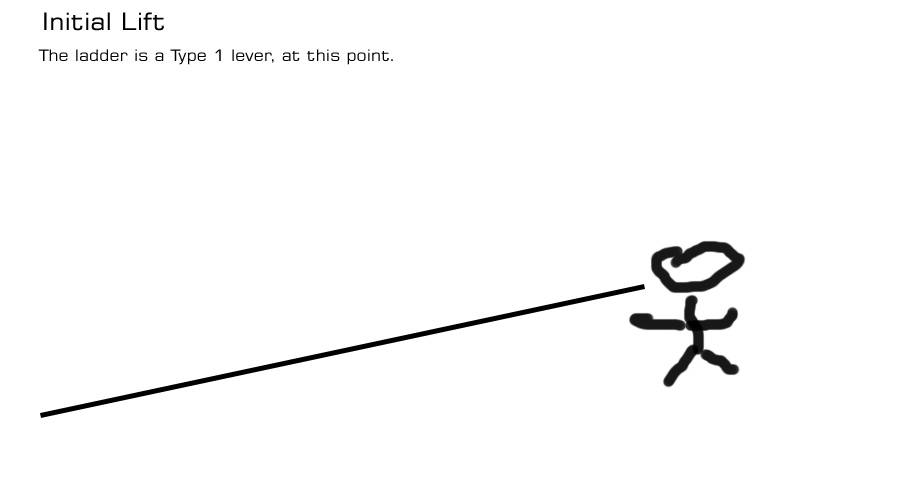 Here’s what I think is going on, that creates that weird load curve. We start out with a type-1 lever. The length of the lever gives the ratio of its mechanical advantage. The ladder weighs about 150lb, but when you just lift one end it feels like it weighs maybe 40lb. You can stand there all day, thinking, “ready, steady, go!” 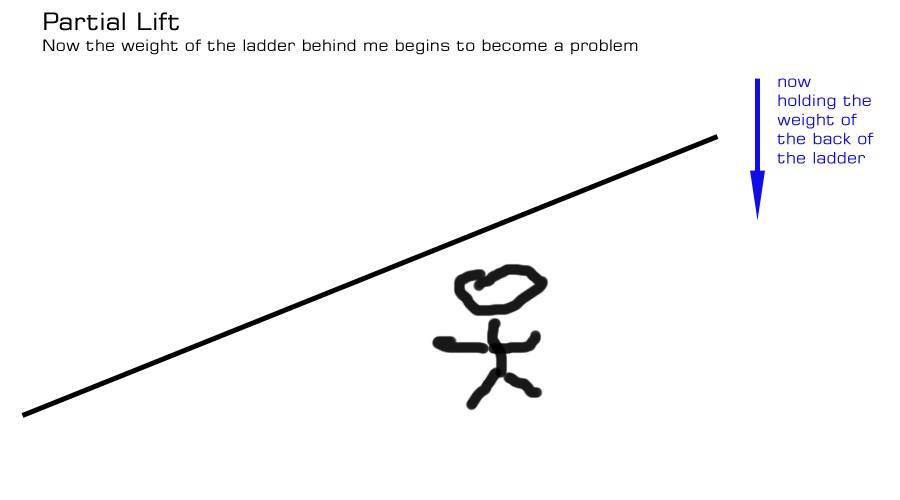 Then, you walk forward (being tall helps, I am pretty sure) and as you move toward the fulcrum, you no longer have any mechanical advantage over the tail end of the ladder. In fact, the closer you get to the middle of the ladder, the heavier it appears to be (I think). I guess what we are experiencing is that we are becoming the fulcrum, or something like that. Basically, we are now a “teeter-totter” and it feels like the entire weight of the ladder is on us. This is “the moment of suck” – the grunt stage. I’m not sure what’s going on, in terms of mechanics, but it feels like I’m doing an overhead press of the entire weight of the ladder – but I know I’m not because I’m not strong enough to do that. So there’s still some mechanical advantage but I think it’s working against me. I’m not sure. Is the butt-end of the ladder now a type-1 lever against me? 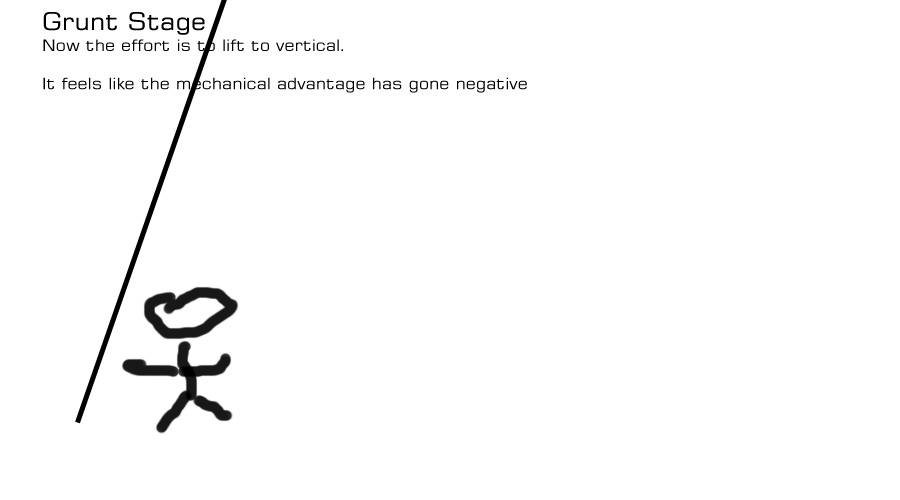 After the grunt stage, you have the ladder vertical and you can hold it indefinitely, effortlessly, while you enjoy your heart attack. Don’t do this on a windy day, because if the wind begins to deflect the top of the ladder, it’s now got leverage against you and (if I am thinking correctly) a small wind-push will equate to a large wind-push down at the fulcrum. You’re at the fulcrum, and the fulcrum is what gets squished when leverage is being applied. 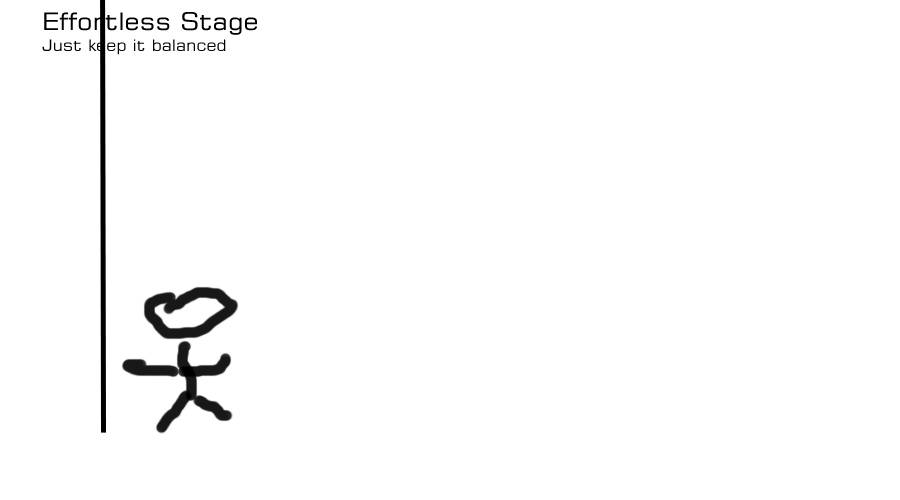 There you have it: ladderology.

I guess the question I have is, am I right that the stresses on the lifter change on some sort of curved function, or not? I get type-1 and type-2 levers, but I don’t understand what the fulcrum experiences. Wouldn’t that be stress equal to the amount of mechanical advantage? I.e.: if my mechanical advantage makes something feel 1 ton lighter, doesn’t that imply that the fulcrum is getting 1 ton of stress on it? I’m not even sure if representing the experience on a curve is the right way to do it, but it’s weird, is all, that the thing starts out manageably light then becomes ball-bustingly heavy, then weighs nothing – all within a few seconds. And it has to be “a few seconds” because if you stall out and stop moving at the “Grunt” stage you’d better start thinking about how you’re going to walk back or land the ladder, because it’s not going up.

That was my yesterday. After that, I was done, and took a cool shower, made some szechuan chili oil, had some angel hair pasta with peanut/fire oil sauce, and played Subnautica.