As you can tell from my posting the other day, I am sick of Georgia’s desire to both steal elections based on apartheid policies, and complain about the social and political consequences for doing so. [stderr]

If you’re going to throw punches, you’ve got to be expecting to receive a few in return. Otherwise, you’re “punching down” – deliberately attacking someone that you believe cannot respond in kind. What happens next is, as Mike Tyson used to say: “everybody’s got a plan until they get punched in the face.”

This is the not-so-sad story of a town in Poland that allowed a majority of their more feeble-minded politicians to grab the wheel of the ship of state and attack an easy target (because Poland appears to have learned that attacking The Jews is a mistake but are unskilled enough in philosophy to not be able to generalize an idea) – so, let’s attack LGBT people, right? One way of looking at this is: “damn it look at all the oppression!” and another is “damn it look at how decent people rallied around and shoved that town’s new legislation where the sun doesn’t shine!”

KRASNIK, Poland – When local councilors adopted a resolution two years ago declaring their small town in southeastern Poland “free of L.G.B.T.,” the mayor didn’t see much harm in what appeared to be a symbolic and legally pointless gesture.

What initially seemed a cost-free sop to conservatives in the rural and religiously devout Polish borderlands next to Ukraine, the May 2019 decision has become a costly embarrassment for the town of Krasnik. It has jeopardized millions of dollars in foreign funding and, Mayor Wojciech Wilk said, turned “our town into a synonym for homophobia,” which he insisted was not accurate.

I love the Failing New York Times and how it often sketches its way around making any kind of solid statement blaming anyone for anything. “Local councilors” adopted a resolution. Does that include Mayor Wojciech Wilk or not? How did he fight that stupid resolution and what has he been doing for the last 2 years? Did the council of Krasnik sit on their hands and go, “no we believe so passionately about this stupid thing that we’re willing to burn our economy to the ground over it!” in which case, show the courage of your convictions. Or, apologize. Don’t wait 2 years and when the consequences start to bite, go call a whaaaaaambulance [In parts of Europe whaaaaaaaambulances are covered under socialized medicine, so it won’t cost them much]

This aspect of “haters” leaves me darkly amused: if they actually believed in their hatred, they’d put up or shut up. You know, like the former “Grand Dragon of the KKK” who was a local government employee in Georgia, with a supervisor who was black. Compromise, much? But standing back, now, and saying that it was a publicity stunt that blew up in your face … well, “do you also light firecrackers by holding them in your teeth, jackass?”

A French town last year severed a partnership with Krasnik in protest. And Norway, from which the mayor had hoped to get nearly $10 million starting this year to finance development projects, said in September that it would not give grants to any Polish town that declares itself “free of L.G.B.T.”

“We have become Europe’s laughingstock, and it’s the citizens not the local politicians who’ve suffered most,” lamented Mr. Wilk, who is now lobbying councilors to repeal the resolution that put the town’s 32,000 residents in the middle of a raucous debate over traditional and modern values.

Basically, that reasoning is the same political maneuver that a lot of people tried to pull on muslims after 9/11: “why don’t all good muslims stand up and tell the bad muslims to stop?” Hey, stupid, that’s what we’re doing. Yes, it hurts the little people. Little people: you need to form your Little People’s Revolutionary Movement and start building guillotines, apparently.

The situation also illustrates the real-life consequences of political posturing in the trenches of Europe’s culture wars. 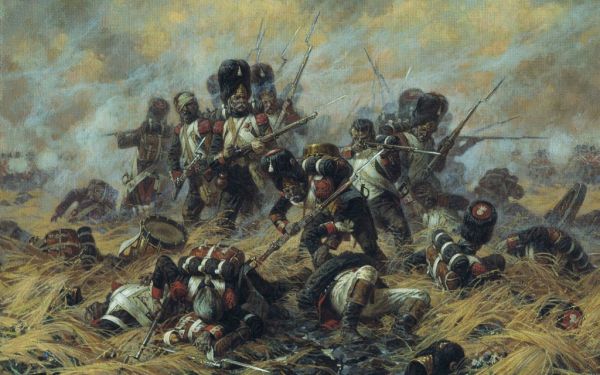 How to “defeated” – the old guard at Waterloo

Politician posturing is a bad move, in general. No need to get specific. Because, if it’s just posturing, then it means you’re engaging in political acts that you don’t really mean. OK, well if you don’t mean it – don’t do it. If you do mean it, be prepared to form square like the Old Guard at Waterloo, and get blasted at point-blank range with well-deserved grapeshot until you see the error of your ways. Merde!

When Krasnik declared itself “free of L.G.B.T.,” it was joining dozens of other towns in the region that had adopted similar measures with strong support from Poland’s governing right-wing Law and Justice party and the Roman Catholic Church.

Oh! Well, now let’s talk about something that’s going to make a bit more sense, like: “how stupid were you to listen to the Roman Catholic Church about politics?” You should be investigating them for what their priests have been doing with your kids behind your back, not taking their political advice. The broader message here appears to be “you chucklefucks need to learn the reasoning for the enlightenment ideal of separation of church and state.” I know he’s French, but Voltaire explained it to you, back in the 1760s, weren’t you listening – écrasez l’infâme. (“crush the foul thing”)

So, if we want to point the needle of blame, the indicator dial is set on “catholicism” apparently. Well, that’s OK – everyone makes the mistake of failing to separate church and state. Ultimately, it’s one of the values that makes up modernity and you’re either for it, or against it.

There’s an easy way to deal with Krasnik’s problems: run their current council out of town, except for the ones who did not support that stupid resolution. Then issue a press release saying “we are sorry and we got rid of those jackasses and we will never do anything like that again.” Maybe hoist some rainbow flags and invite RuPaul’s Drag Race to hold one of its episodes in the beautiful, quaint, town. [I am not a huge fan of Drag Race because I see it as another financially exploitative “reality TV” show; my objections have nothing to do with the LGBT talent who participate] And pass a resolution disallowing the Roman Catholic Church to participate as an entity, rather than individual roman catholics, in your political process. Basically, it’s the standard:

It’s not hard. Yeah, I know, jackasses are everywhere; we even have a few in our southern elected representative bodies over here.

Here’s the thing: it is true that boycotts only hurt the little guy. I am pretty much convinced that boycotts are the”strategic bombing” of social justice: you only have an effect at the point where the enemy has been reduced to rubble – but they still don’t oust their leaders. In fact, the leaders make sure that they are some of the last people still standing on their feet. [gb] Basically, once a country has been infected with political nihilists in high office, they can’t be displaced from the body politic without killing the host. Is there an inoculation for political sociopathy? It doesn’t appear possible, because political nihilists hide their true colors until they gain power, then they blossom and reveal themselves as covert nazis, or libertarians, or god knows what all else. We cannot fairly blame the little guy for having been fooled again [get on my knees and pray…] but what can we do? I have no answer.