I’m not going to build out an exact time-line of events because it would be a waste of time.

But, the chain of causality begins when the US decides to assassinate Iranian general Solemani with a knife-missile strike. Never mind that that was a crime under international law, as well as under US policy (which the US ignores at its convenience) The US blew up a general officer of another country, while they were in another country that the US has been prosecuting an illegal war of aggression, in, for the crime of being there. As I write that, it sounds really fucked up, but I think that’s actually a fair statement of the event. [ap]

Though a statement issued by the Pentagon said the attack was specifically intended to kill Soleimani and that it was ordered “at the direction of the President,” it also characterized the killing as defensive, to protect U.S. military forces abroad, and stated that Soleimani was actively developing plans “to attack American diplomats and service members in Iraq and throughout the region.”

In other words, the US’ justification was pre-emptive warfare: we killed him because he was planning to kill some of us. Except that, as usual, no evidence was given and Solemani never actually did any of that bad stuff because they killed him first. The doctrine of pre-emptive warfare is a difficult one (and, I would argue it makes the notion of “just war” a travesty) especially coming from a country that was, let me remind you, actively in the middle of a war of aggression in which it had troops stationed in Iraq and Syria, secretly or otherwise, deploying artillery, carrying out air strikes, and otherwise attacking people in Iraq and throughout the region. In every sense, the Iranians would be perfectly justified in launching assassination strikes against US general officers (or troops) in the area, for exactly the same reason – except they’re not stupid; they know what would happen. 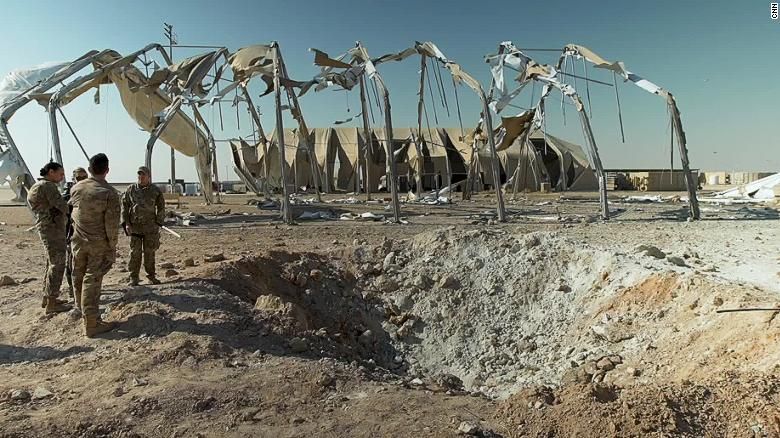 So, the Iranians felt they had to show some kind of force in return, and warned the US that they were going to attack a US base in Iraq, which they did in January 2020. They did this in a manner intended to cause some property damage and demonstrate force without killing anyone. Yet, the US left troops at the base in spite of hours advance warning – almost as though they were hoping some poor grunt got blown to pieces so they could find the tattered remains of bloody shirt and wave it around. I’m going to mention something obvious: the base that was attacked was not in the US – it was, in fact, an illegal base: the government of Iraq got sick of the hosting contract that the Bush administration shoved down their throat with a bayonet and asked the “more reasonable” Obama administration to get US troops out of Iraq. The more reasonable Obama administration told the Iraqis to “get stuffed” because it’s necessary for the US to have bases in the region to attack other places throughout the region.

That was round 1. Tit for Tat. Game theorists everywhere applauded.

Ain al-Assad hosts Iraqi forces and US-led troops helping to fight Islamic State. It is also a base for drones used in the surveillance of jihadist sleeper cells.

As I read that, it’s an Iraqi base with (no doubt) some US intelligence/drone pilots embedded. Also, mercenaries. One of the mercenaries died from the shock of the rocket strikes:

“A US civilian contractor suffered a cardiac episode while sheltering and sadly passed away shortly after,” the US defence department said, noting there were no current reports of injuries among US service personnel.

I’m sure Trey Gowdy and the Benghazi investigation brigade will be all over asking how such a thing could happen. But, joking aside, that’s what happens when you’re around 122mm katyusha rockets. The actual rockets were an Iranian-made version of the Soviet Grad dumb-fire missile, suitable for semi-accurate area bombardment. I.e.: it will hit somewhere in the grid-square it’s aimed at.

So, we have an attack in which some Americans were scared and one mercenary died, but mostly the attack was on a bunch of Iraqis. Historically, Iraqis and Iranians swapping artillery is “no big deal” it’s been done before. But, absent from the reporting about this incident is any explanation of how the US contractors managed to be there in the first place, and why it’s the US’ problem that Iranian artillery is hitting an Iraqi base. It’s not a US base – those would be illegal anyway – but still, the US is waving the bloody shirt and making threats of committing more war crimes, or crimes under international law, depending on how you want to parse the events.

In the background, there have been similar rocket attacks against other locations in Iraq, where US mercenaries have been working. It’s hard to sort out what might be the target, exactly, but it’s probably the other assets at the location. For example, [guard] some Iranian rockets hit an Iraqi aerospace facility where repairs were being done to Iraqi Air Force jets. At that facility, naturally, were some Americans – probably contractors for Northrop-Grumman, who were there to do stuff to the planes. In one terminology these were “foreign fighters” of the sort that the US despises when they’re not Americans. A less-publicized “retaliatory” strike was launched against an “Iran-backed” militia (perhaps the Iranian equivalent of Northrop-Grumman?) “near the border.” As if that somehow makes it not a crime under international law? The US is so generous, it’s “retaliating” on behalf of Iraq because that’s how we do things. Note that many of the missiles being fired are from Iraqi “hard liner militia” i.e.: Iraqis that want the US to get the fuck out of Iraq and go home.

What’s going on? It seems pretty clear to me: this is the early stages of the Vietnamization of that region. The Iranians are playing the role of the Vietcong – they’re going to raise the cost of force protection toward “stratospheric” by mostly attacking Iraqi military supply-chains and rear echelon, and occasionally scaring an American or two, until the Americans retreat to isolated forts in the middle of nowhere, like they did in Vietnam, Afghanistan, and Iraq. A few inexpensive grad missiles can make Americans dig holes and climb into them, so it’s a sensible maneuver: the US leaves when it gets to unpleasant to continue to hunker in the bunker.

Now, the US has announced “Tit For Tat For Tit For Tat”: [guard]

The US will do what it sees as necessary to defend its interests after a rocket attack this week against the Ain al-Sada airbase in Iraq, which hosts American, coalition and Iraqi forces, the defense secretary, Lloyd Austin, said on Sunday.

Speaking on ABC’s This Week, Austin said the US was urging Iraq to quickly investigate the incident at the base in the western Anbar province and determine who was responsible. US officials have said the incident fit the profile of a strike by Iran-backed militia.

“We’ll strike, if that’s what we think we need to do, at a time and place of our own choosing. We demand the right to protect our troops,” Austin said.

I don’t want to rain on anybody’s parade, but the US has the right to protect its troops: get them back to fucking New Jersey or someplace that’s far from Iraq.

And the bleeding continues. These people never listened to their mommas when they told them, “two wrongs don’t make a right.”

Watch how the “more progressive than the regressive Trump” Biden administration manages to carefully “flub” the replacement of the Authorization of Acceptable Use of Military Force – Congress’ blank check for executive war powers, which amounted to Congress waiving its constitutional duty to control the US war machine. It doesn’t matter: the US executive branch has decided that it can wage war, anywhere, whenever it wants without fear of retaliation. That’s the rub, here. Basically, the US’ war-fighting policy is best summed by Harvey Keitel as “Mr White” in Reservoir Dogs: “If you even dream you try to kill me you’d better wake up and apologize.”

By the way, look at the shit building that the Iranians blew up. It’s just an aluminum frame with cloth. The US is all weepy over a couple of tents? Muscle up, buttercup!