This is another F-35 story. I know you’re probably thinking “when will this end?” and all I can say is: when the money-pump runs dry.

The F-35’s helmet is notoriously problematic. For one thing (probably the least thing) it costs about $400,000 and is an ongoing aesthetic disaster. It’s also, as WIRED calls it, “stupid cool.” [wired] 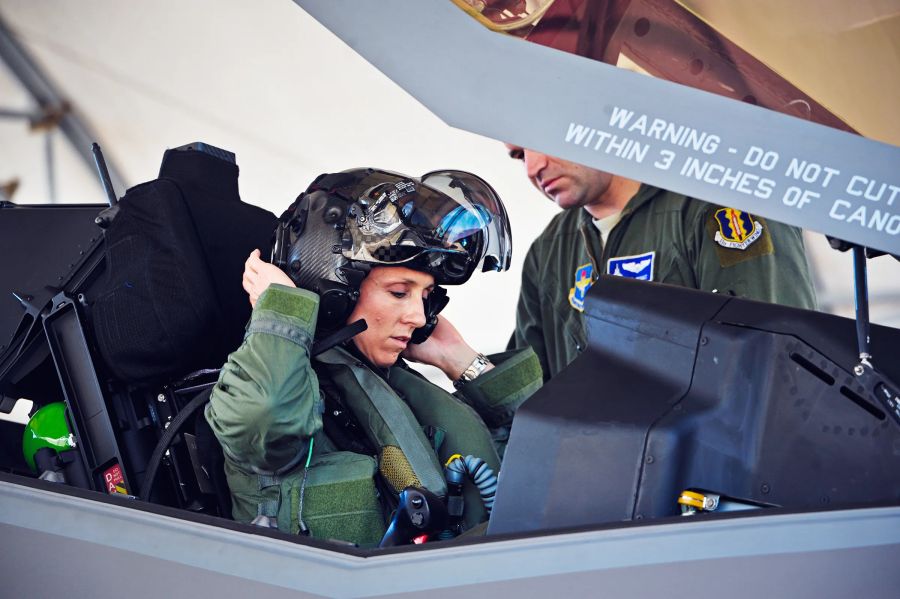 Although, I wonder if there’s maybe a word too many in that salad.

I recall reading that there were design problems (go figure) with the helmet and how it pushed into the back of the seat; the helmet is heavi(er) than a normal helmet and when you’re pulling G’s that’s a problem so the seat has to support it, just the right amount in the right places. It’s kind of interesting to see how to pilot is packed into the cockpit with all that crap surrounding them. Now, imagine that you’ve got to reach forward and fiddle with some touch-screen controls while simultaneously flying a really expensive killing machine. I don’t want to make this personal, but all I can think is that this arrangement of technology looks like someone made the mistake of asking Elon Musk to design an aircraft cockpit and then told him “money is no object.”

Why is the helmet so funky? Oh, that’s because it’s got augmented reality. Which, one imagines, might be cool or useful if done right. But, is it? Let’s first explore the capabilities of the helmet:

The head unit, made with help from Lockheed Martin (which designed the F-35) is way more than a protective shell. Built around a custom-fitted insert based on a 3-D scan of the pilot’s noggin, it combines noise-canceling headphones, night vision, a forehead-mounted computer, and a projector – not so different from the one in your office’s conference room – that displays live video on its clear visor.

Fortunately, pilots heads don’t change size. But having a $400,000 helmet that is custom-molded to the pilot is sure going to do a lot for making it easier to onboard new pilots. So, when the government of, say, Finland buys F-35s, do they have to ship the pilots over to someplace in the US to be scanned? Joking aside, this seems to me to be a potential intelligence disaster for everyone except the US: we get intimate knowledge of your roster of pilots because they’ve got to come get custom-fitted, and then we can also give them a personalized head-mounted tracking device full of mysterious proprietary software. Given the US intelligence community’s fondness for putting malware in all the things, I can’t see how any defense department that thinks strategically would actually buy this stuff.

To make the helmet work as designed, plug it into a $100 million F-35 Lightning II joint strike fighter. There’s no Bluetooth or Wi-Fi here; a Kevlar-sheathed bundle of cords cascades down the side of the shell, providing input/output options for the plane’s communication system and computers.

That’s really amazing. Assuming it works. I have some experience with commercial virtual reality headsets (an HTC Vive) and augmented reality glasses (Q’s Magic Leap glasses) and “the software is finicky” is an understatement. In a jet fighter, it’s got to be flawless and that means every connector, every wire, and all the running computers and code have to not crash at an inconvenient time. I’m glad to hear there’s no bluetooth or Wi-Fi hauling the (presumably impressive amounts of) data back and forth, because those are not especially reliable systems in the face of hostile interference.

My first instinct, naturally, was to search for “F-35 helmet reliability” because I’m a cynic and a nay-sayer. It turns out that, like with everything else to do with the F-35, earlier versions didn’t work so good. Now, of course, everything is fine. Help me believe that. [airspace]

Ideally the display would follow instantly and seamlessly, but in early generations of the helmet, the display lagged behind a change in head orientation. According to an April 2017 Government Accountability Office report, those problems have been addressed.

“There are a lot of factors that need to work well together,” says Joe Ray, a manager at Rockwell Collins–ESA Vision Systems, which provides the helmet display system. If the developers conduct a test and see a performance they weren’t expecting, he says, “we bring the pilots back in and we duplicate that [finding] in the lab.”

It sounds to me as though some lucky pilots are flying around with a head surrounded by alpha-test code. But, seriously, there is so much money being spent on this project that they are going to get it right eventually. I’ll leave all the operation questions like patch management and regression testing unspoken-of, because I’m sure that they are not a problem.

Here’s where it gets interesting, to me: the aircraft has 6 cameras in it, providing visual coverage in all directions. So the pilot can look down at where their feet would be and “see” through the bottom of the plane. From the sound of it, the touch-panels that they are expected to be able to also use, must be overlaid in the correct location or something, so the pilot can still fumble with them. Or something. And apparently the F-35’s software can do the same thing that caused crashes in the Boeing 777 Max: it can take control of the aircraft away from the pilot and start doing what it thinks is best:

One of the marvels of this airplane is the digital flight control technology. You are telling the airplane to go up or down, speed up or slow down, go left or right. And the computers figure out what’s the best way to do that, and they’re going to move the flight controls to do it. And the interesting thing is, they may not do it the same way twice. So let’s say the airplane gets damaged, and one of the flight controls is no longer available. A legacy airplane would still try to use that surface because it doesn’t know any better. The F-35 digital flight control systems will say, “That surface isn’t doing much for me anymore, so I’m going to have to compensate by using some other things. Maybe I’ll have to move them a little bit more to get the same effect because the pilot still wants to turn left.”

Sounds like the pilot has two choices: sit back and enjoy the ride, or eject and enjoy the ride. To be fair, the pilots interviewed in that piece sound guardedly enthusiastic about the plane. Of course, several of them are Northrop Grumman test pilots. Slap me and call me “cynical” but I’m with Upton Sinclair (“It is difficult to get a man to understand something, when his salary depends on his not understanding it.“) 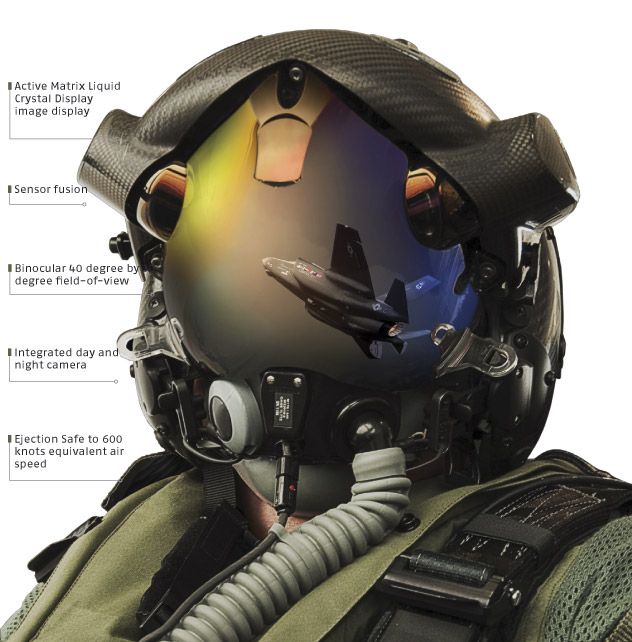 Here’s the thing I’m wondering: the F-35 was originally being touted as a stealth fighter/strike aircraft. Then, when it turned out to be too wing-loaded to be a decent knife-fighter – and nobody seems to engage air-to-air at knife range, anyhow – they began touting it as a mobile sensor platform. At that point, I wonder whether the air-to-air combat feature of being able to see in all directions is really worth it. Wouldn’t some kind of strategic situation management display be more useful? The F-35’s current “mission profile” (i.e: “purpose”) is what they call “beyond visual range engagement” – i.e.: you’re shooting long-range missiles at planes you can’t even see. Being able to see through your plane would be useful if you were in a classic dogfight, of the type that hasn’t happened since the Korean War (and even then, it was notable because it was rare). I realize that every little advantage in warfare can spell the difference between victory and defeat, but it worries me that the US’ strategy is to have a small number of very fancy gizmos, whereas every single component of that complex, fancy gizmo has to work right or its advantages are negated. Meanwhile, the Air Force’s procurement process appears to be optimized for producing insanely expensive stuff that needs to be tweaked and massaged endlessly until it works right, at which point it’s obsolete (e.g.: F-22).

All of this comes back to the Air Force’s love of flying. I understand that, I really do, but those days are as much in the past as knights in armor charging at each other in the lists. It had its moment, and that moment is gone. The Air Force is becoming an expensive version of the Society for Creative Anachronism, except they kill people. Most of what the Air Force continues to do with its expensive weapons platforms is drop high explosive on inexpensive insurgents.

If you’re interested in Air Force procurement, you should read up on the “fighter mafia” – Pierre Sprey and John Boyd and a few other pentagon insiders [wik] who had the radical idea of creating a pure fighter aircraft. A knife-fighter’s knife, if you will. The result was the most successful aircraft the US ever built, the F-16. Which has since been turned into a general-purpose platform, mostly to hang bombs all over for dropping on inexpensive insurgents. The fighter mafia allied itself with the military reform movement [airforcemag]:

The Military Reformers were an obscure lot when they first emerged on the national stage around 1980. There were only about a dozen of them, mostly retired officers and midlevel systems analysts from the Pentagon and the defense industry. The outside world had never heard of them. They were not even called “Reformers” yet.

Their basic message was that the US armed forces were addicted to high technology and complex weapon systems. Such weapons were so costly that relatively few could be bought. Complexity made them hard to use and maintain, leading to readiness problems and reduced sortie rates. Even worse, the Reformers said, these complicated weapons were not as effective in combat as simpler, cheaper ones.

I assume you can see the profound influence that their thinking had on mine. One of the characters in the reform movement was Franklin “Chuck” Spinney, who is (I think he’s retired and cruising around on a boat somewhere now, he used to blog, or fulminate-blog [the blaster]) the author of the “defense department death spiral” paper. Perhaps I should write a piece about it, but if you’re seriously interested in this stuff you should go directly to the source. [time] Spinney’s view is godlike in its omniscience. Unfortunately, Spinney makes me extremely uncomfortable because at his core he’s still an imperialist: he can’t break away from the assumption that all these weapons are necessary and that the US needs to defend itself against those inexpensive insurgents.

Meanwhile, the procurement system’s history is repeating itself: the Air Force has decided it needs another cheap, pure, fighter. To maintain that air superiority over whom, exactly?