I hope this is not “too much information.” If so, tough.

Back in the 90s I had a number of experiences with MDMA, LSD, and ‘shrooms. Not a lot of experiences, but it was interesting. One of the things I noticed in those times is that I become extremely attuned to lighting when I’m tripping. And, oddly, that attunement remained even after I came back down – it didn’t bother me at all, in fact I think it really made my photography much better, and my appreciation of great light remains a source of pleasure.

About 5 years ago, I tried some “smart” lightbulbs that could change color. They turned out to be “dumb” because each bulb used an IP address on my shitty Verizon home router, which only supports 5 addresses. I know I could fix that, but I was so maddened by the stupid that I un-deployed the lights and replaced them with a cheap Chinese-made brand that uses a dedicated wireless controller that works for about 30 feet; I have all the lights on the upper floor of the house controlled by controllers that are velcro’d to walls here and there. In the evenings, the lights are usually low, dark red. I can see fine and it’s very relaxing for reasons I have not figured out.

Then, last year, I started working out the relationship between my occasional gout attacks and the amount of water I was pushing through my kidneys. It appears that pushing a lot of water helps protect me from that, which is great but it means getting up several times each night, to unload the salt-laden water. So, I hit upon the idea of putting a photocell with a PIR switch and some LED strip lights under the bed. Now, when I swing my legs out of the bed, a dark red light automatically comes on for a minute. It makes the somnolent pee-runs much nicer, since I am less likely to slam into some of the clutter-piles that move willy-nilly around my floors in the night. The first time I tangled my feet in a sleeping bathrobe and nearly tripped face-first into the cast iron radiator, I had to do something.

The other day I decided to mod my toilet. That meant putting an outlet-box near it, which is not normal for construction. I had to do some drilling and sawing and patching wires into an existing outlet, but I got it done: 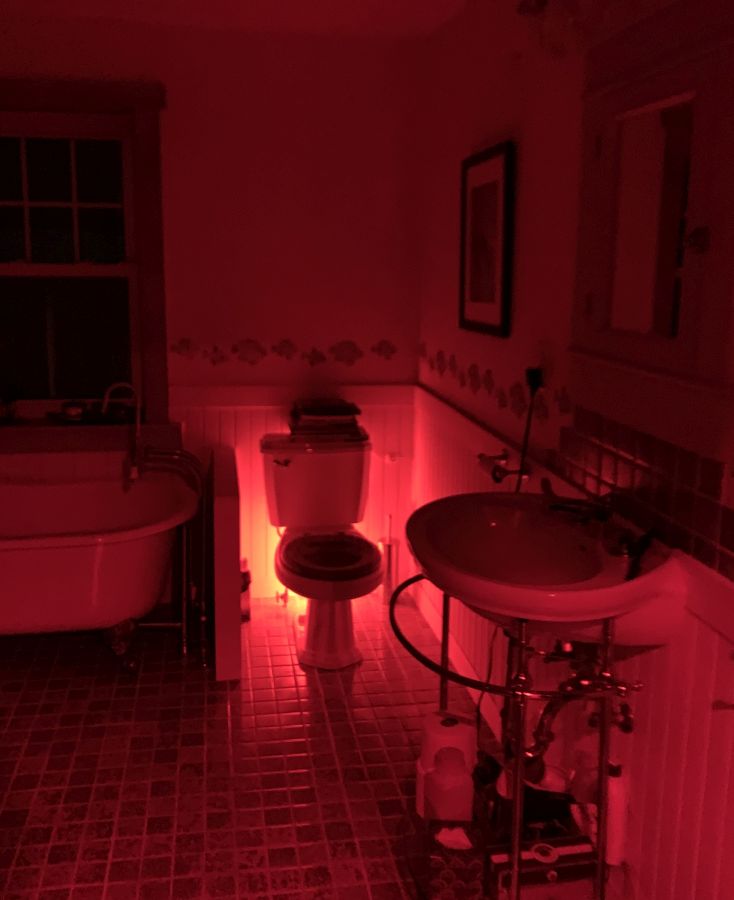 I admit, I am tempted to put a small mist-maker in the circuit, too, and maybe a small speaker that will mutter “Zuuul” when the lights come on. I don’t have guests often, but we don’t want people running out into the Pennsylvania wilds in the dark. I’m quite satisfied with this outcome.

Yes, I did think about using a diamond hole-saw to put the LEDs through the ceramic instead of just up the back. But, I convinced myself that there is such a thing as “too far.” I’ve replaced toilets and it’s a lot of work I’d rather avoid.