Mikey Weinstein, of the Military Religious Freedom Foundation, wrote an excellent open letter to the US Air Force Academy, pointing out that they’re reaping the consequences of allowing christian nationalists to pack the Air Force leadership.

[daily kos] it wraps up with:

The USAFA must address its decades old, complicit role in developing fundamentalist Christian religious/political extremists who are now widely serving in our military. It must, as well, hold itself responsible for creating horrors like Mr. Brock in the same way it does USAFA graduate heroes whom we praise on the other end of the patriotic spectrum.

We told you this was happening.

We told you the consequences.

Now condemn it on the public record and work with us to fix it.

Needless to say, Weinstein’s charge applies in general to evangelical christians, who have thrown their support behind Donald Trump, one of the least “christian” people in the political arena, today.

Most of us have to ask, “is it the power?” or “is it just the racism?” And I wonder how many christians are honest enough, or self-actualized enough, to be able to say. They make a mockery of their piety. 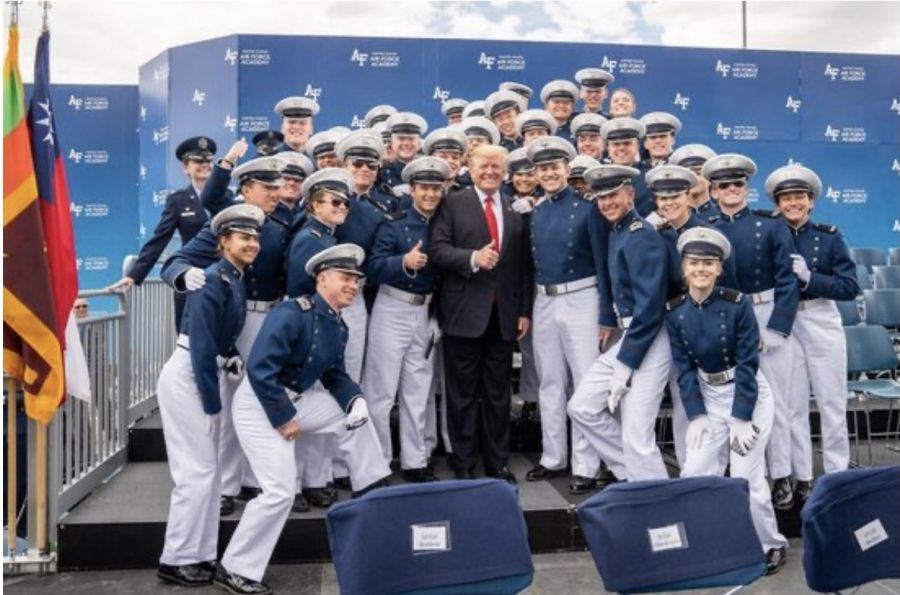 Aside from the slightly orange-tinged grinning loser in the middle, that’s one heck of a white bunch of people. I wonder if the Air Force carefully screened the attendees at the event, so as not to upset the snowflake-in-chief, or if that’s a good representation of the spectral hue in the Air Force command structure?

Christians need to take ownership of, and explain their love for Trump. And the Air Force needs to explain its love for christianity. After all, they love dropping high explosive on christians, just as much as they do everyone else. I know, I know, “just following orders” and all that.

The military’s love for Draft Dodgin’ Donald also baffles me. although he appears to have singled them out for some back-handed abuse. Have you noticed how Trump seems to eventually deride everyone who worships him? It’s as though he can’t keep from feeling contempt for anyone that’s such a suck-up that they’d love him. That’s some wicked psychology: narcissistic self-hatred.