This fascinating tidbit was mentioned in an aside on TWIV. Even their digressions are often mind-blowing, and teach fundamental scientific thinking. I mentally bookmarked it under “more research” and “not miserably depressing” and started digging.

I’m going to just quote from other blog postings by other people, because I had no idea about this topic before I read them. [hidden history]

Abraham Wald was born in October 1902 in the city of Cluj, located in Austria-Hungary (now known as Romania). A natural-born mathematician, Wald graduated from the University of Vienna with a Ph.D. in mathematics in 1931. However, Wald found difficulty finding a university position due to the discrimination he faced for his Jewish faith. This discrimination only got worse upon the Nazi invasion of Austria in 1938, prompting him to flee to the U.S.

In the U.S., Wald received an invitation to join the Cowles Commission for Research in Economics as part of the Statistical Research Group (SRG). As part of the SRG, Wald applied his vast mathematical and statistical knowledge toward solving various wartime problems throughout World War II (WWII).

One of the most notable problems that Wald helped solve (and the focus of today’s article) concerned the placement of armor on American bomber aircraft sent to campaigns over Europe. The SRG was faced with the task of increasing aircraft survivability without compromising flight range or maneuverability. Thus, the aircraft could not be covered entirely with armor. Instead, the SRG had to prioritize the most important parts to place armor plating on.

Survivability and power-to-weight ratio are two of the most important determining factors of military aircraft’s success. I had never heard that there was a team of statisticians assigned to work on such problems, but it makes sense. When statisticians go to war, they’re likely to win! (84%!) #rimshot 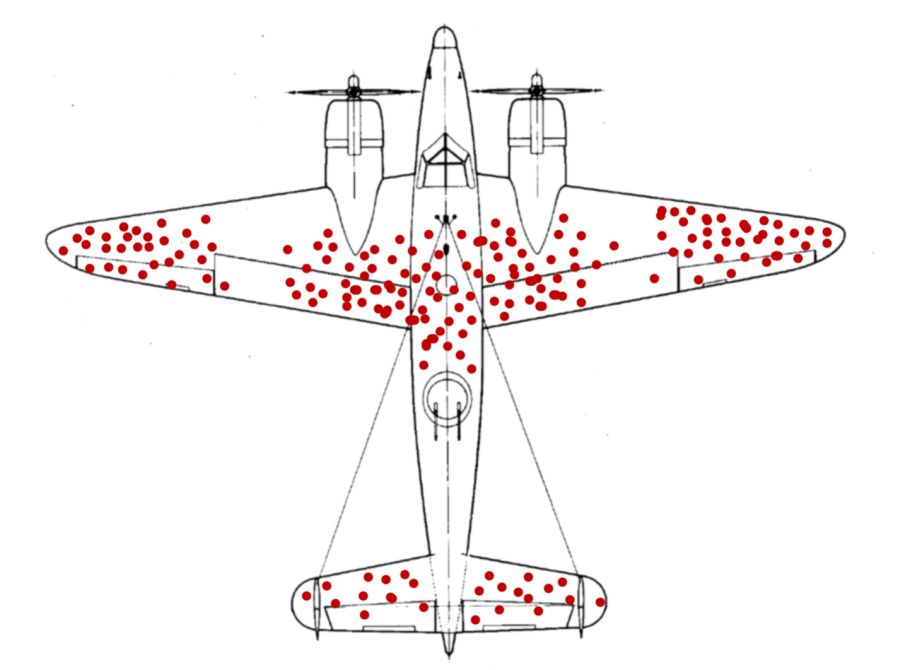 This is one of those judo flips of science, like the (original, simple) anthropic principle, that stand out to me as examples of scientific reasoning at its best. But, first, a mistake:

The initial approach of the SRG was to look at returning American B-29 bombers and note where they had taken the most fire. The SRG noted that the bombers they observed had fuselages (main bodies) riddled with bullet holes, taking almost twice as many hits as the engine platforms.

Thus, the SRG made a simple decision: apply more armor to the fuselage. After all, the crew were housed inside the fuselage, so adding extra protection here seemed to make the most sense.

Then, Wald steps in:

However, Wald was the one to point out that this approach was completely wrong. He instead suggested that extra armor should be placed in all of the places that the SRG noted no bullet holes appeared. Why is this? It was because the only planes that the SRG looked at were the ones that actually survived out in the field, and they were therefore a sample showing the exact opposite end of the data pool for the problem at hand.

The planes that got hit in a particular location, and made it home, must have been able to survive hits in that location. The places where no returning planes had hits were the places that caused the plane not to return at all. On the illustration above, that’d be the wings where the wing tanks were, the engines, the pilots’ seat, and the fuselage where the hydraulic pumps and control surface lines were run, etc.

Simple, brilliant, and so illuminating!

Other forms of surviorship bias are:

“Steve Jobs, Bill Gates, and Mark Zuckerberg dropped out of college and became millionaires, so will I.” [source]

Another variation I encountered was, I believe, in George MacDonald Fraser’s Royal Flash in which he’s looking at a nasty opponent with dueling saber-scars on his face and realizes that the guy he should be afraid of is not the fellow with the scars, but rather the fellow who gave that fellow his scars. It’s the student who graduates from Heidelburg Military Academy without any scars, who is the one to watch out for.

What are some other fun examples of survivorship bias?

I am not sure it was in Royal Flash but I’m not going to re-read the entire series to verify it. Sometimes, a blogger has to rely on their memory and hope for the best. I apologize to GMcDF or whoever, if I am mistaken.