The other night I was doing some google-whacking, looking for coverage regarding which of Trump’s advisors may have played an active role in talking him into the very bad idea that he could extend his time in office illegally.

No doubt, a great deal of it is Trump’s own childish mulishness, but I have never thought Trump was a great student of history. Maybe he’s learning from Erdogan? Hitler? Putin? By the way, history is full of lots of leaders who overstayed their welcome in power, overtly or otherwise. The oldest form of overstaying one’s welcome is called “monarchy.” 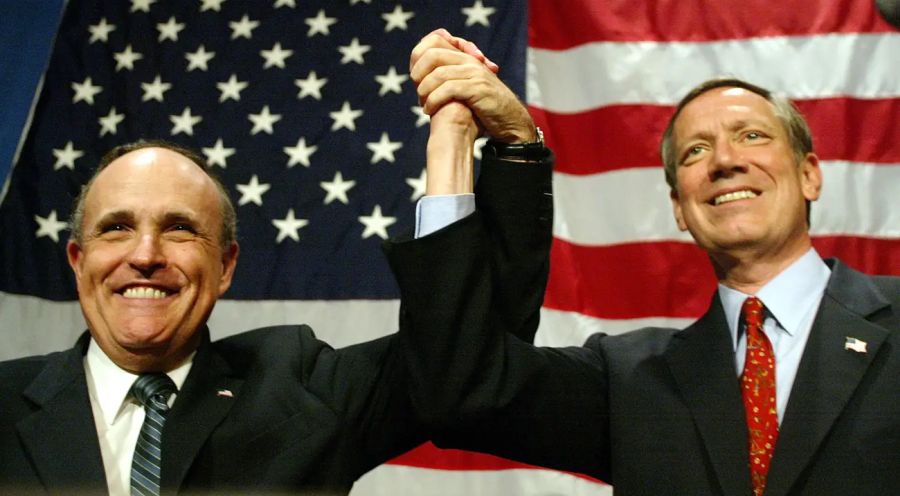 if you stuck a bunch of teeth into an asshole, you’d have a) a new sex trick b) a republican candidate

Giuliani May Try to Keep Job After Term Ends in December

Mayor Rudolph W. Giuliani, reconsidering his position that the mayoral election should go on without him, believes that New Yorkers should be able to decide who leads the city out of these troubled times, even if it includes an extension of his term, people close to the mayor said last night.

While Mr. Giuliani is barred from serving another consecutive term  under the city’s term limits law, he has rebuffed questions about his view of the matter in recent days. He is expected to address the issue directly as early as today, less than 24 hours before voters are to go to the polls in the rescheduled mayoral primary.

“People close to the mayor” is journalist code for “his official leaks” or flunkeys. You know, like when Donald Trump pretended to be “John Barron” and called Forbes to lie about his wealth and strong-arm them into listing him on the “400 Wealthiest” list. If you read between the lines with extreme cynicism, it sounds like Giuliani floated the idea past someone at the NYT to get their reaction. Or, someone else who had heard the idea floated it past someone at the NYT so that they would publicize it and shoot it down.

Since the Sept. 11 attack, many New Yorkers have called for extending the mayor’s term for at least six months, if not four more full years, in spite of the law. Such an extension could require the approval of the State Legislature and the City Council, and neither group has been amenable to the idea in the past week.

“Many” unnamed New Yorkers. Yeah. I believe that.

In recent days, petitions have made their way around the city calling for extending the mayor’s term — not that of the council members and other public servants barred from serving under the law — and at least one large corporation has taken out newspaper advertisements urging the Council and the Legislature to get on board. Letters to the editor pages of all the city’s major newspapers are full of calls for the mayor to remain in office for four more years.

Furthermore, officials in the mayor’s office, including Deputy Mayor Joseph J. Lhota, have made a round of calls to city and state legislators seeing if they would support some extraordinary move to adjust the law.

“Officials in the mayor’s office” … you mean officials in Mayor Giuliani’s office? Spontaneously started making a round of calls to city and state legislators trying to get them to ignore the law?

The whole point of term limit legislation is that The People can run out the clock on a shithead like Giuliani.

Gov. George E. Pataki made his own calls, to the candidates for mayor and to Sheldon Silver, the speaker of the Assembly, seeing how they would feel about postponing the primary. All of them strongly urged the governor not to do so.

But that did not stop the governor from fanning the flames: on Friday, during an announcement to the news media that the primary would indeed go on, Mr. Pataki said of Mr. Giuliani: ”If I lived in New York City, I’d write him in.” He did not elaborate.

“Hey, lets do crimes.” Pataki, of course, is a Republican. Which means he’s all about democracy. That’s why he allowed the whole thing to remain mostly secret. Giuliani had ambitions, but unfortunately there was no Brutus around.

Mikey Weinstein Tells It Like It Is » « The Stillness of Remembering What You Had, And What You Lost