This bothers me a lot. Not because SpaceX is not qualified to do this, but because it shows that the military/industrial complex has gotten their nose under the tent. Once they become one of your biggest customers, then they can subtly threaten your bottom line and ask for “favors”

“The satellites will be able to provide missile tracking data for hypersonic glide vehicles and the next generation of advanced missile threats,” Derek Tournear, the director of the Space Development Agency, said in a press release. SpaceX will build and deliver four of its Starlink satellites which the Pentagon said it will fit with special sensors to allow them to track missiles, including nuke-bearing Intercontinental Ballistic Missiles and hypersonic glide vehicles.

That’s worrisome. For one thing, it means that the entire Starlink satellite cloud is now a civilian target in a military incident. In the event of a full-up nuclear exchange, nothing will matter, but in the meantime it’ll serve as another way of monitoring other nations to make sure they’re not getting up to what we’re getting up to.

Call it “Vela 2.0” Most people don’t know what the Vela satellite system is/was (I assume there is something like it still in place) – the Vela satellites were sensitive measuring devices that looked for the distinctive electronic “pop” of a nuclear weapon going off. The sensors were called, appropriately, “bhangmeters.” The satellites were able to detect a single pop from a fission bomb, or the double pop-snap of a two-stage fusion device. It’s the Vela satellites that inspired my “Another short story about nuclear war” [stderr] – there are other things in the universe that have a similar pulse but they’re supernovas and happen on a different time-scale.

The Vela satellites are part of an interesting story: in 1979 one of the Vela satellites detected a double pulse near South Africa. There was some scrambling in the intelligence community and at the policy levels to figure out who had fired a nuke test and whose program was sufficiently advanced. People who watch this stuff, myself included, concluded it was probably Israel which, at the time, was making nuclear technology trades with fellow apartheid government in South Africa. At that time, South Africa had a nuclear program, which they later shut down because of international pressure, its lack of success, its cost, and – more importantly – it was realized that South Africa’s threats were internal and nuclear weapons would not help with them.

A recent piece in Foreign Policy gives a detailed account of the “Vela Incident” and reveals additional sources that point the finger at Israel. Realistically, everyone knew it – its just that the US would have been revealed for hypocrisy by continuing to ignore Israel’s nuclear program while simultaneously strong-arming other nations about theirs. The situation remains unchanged since 1979: Israel is still an “undeclared” nuclear power in spite of widespread documentation of their program (Mordecai Vanunu’s detailed descriptions of the refinement plant at Dimona, etc) and the US is still ruthlessly turning the screws on Iran and anyone else that they can point at and claim “they have a nuclear program!” The article in Foreign Policy reads like a novel, it’s really good and interesting though admittedly it’s an account that’s mostly interesting to a specialist.

Shortly before sunrise on Sept. 22, 1979, a U.S. surveillance satellite known as Vela 6911 recorded an unusual double flash as it orbited the earth above the South Atlantic. At Patrick Air Force Base in Florida, where it was still nighttime on Sept. 21, the staff in charge of monitoring the satellite’s transmissions saw the unmistakable pattern produced by a nuclear explosion – something U.S. satellites had detected on dozens of previous occasions in the wake of nuclear tests. The Air Force base issued an alert overnight, and President Jimmy Carter quickly called a meeting in the White House Situation Room the next day.

Nuclear proliferation was just one of the Carter administration’s headaches in late 1979. The president was dealing with a slew of foreign-policy dilemmas, including the build-up to what would become the Iran hostage crisis. Carter was also preparing for a reelection campaign in which he had hoped to showcase his foreign-policy successes, from brokering Israeli-Egyptian peace to successful arms control talks with Moscow. The possibility that Israel or South Africa, which had deep clandestine defense ties at the time, had tested a nuclear weapon threatened to tarnish that legacy. And the fact that South Africa’s own nuclear weapons program, which the Carter administration was seeking to stop, was not yetsufficiently advanced to test such a weapon left just one prime suspect: Israel. Leading figures within the administration were therefore keen to bury the story and put forward alternative explanations.

Plus ça change, neh? I like how the article dances delicately past the fact that the Carter administration was trying to pass their foreign policy off as successful because of an election. I’m slowly coming to realize that everything the US does, basically, is about getting some gerontocratic asswipe re-elected. “Tarnished legacy”? Well, nothing tarnishes your legacy like it being revealed, later, that you misled the public. Oh, who am I kidding?

By the way, in At The Abyss [wc] Tom Reed mentions, in passing, the degree to which the science of nuclear forensics has advanced. The simple way to think about it is: it’s impossible to produce an anonymous nuke. That’s an important plot device in some of the ridiculous threat-scenarios totalitarian Americans love to worry about: a secret North Korean nuke that plunges the US into electromagnetic-pulse stone-age; it’s not going to happen because samples of the explosion’s byproduct include a detailed “fingerprint” from which nuclear forensic scientists can tell what breeder reactor bred the plutonium, in which kind, as well as the type of centrifuges that were used and how much use the cascade had gotten. The articles linked in the Foreign Policy piece don’t mention that, though it’s absolutely certain that an airplane got down there and collected samples of the explosion by-product. Then, I guess, they said, “we don’t know this reactor” and “let’s call it ‘Dimona’ and if we see this fingerprint again, we’ll know.”

Musk’s satellites are part of a broader Pentagon plan to pepper the sky with hundreds of satellites with multiple functions. The SpaceX satellites are meant explicitly to track and monitor threats in the sky as part of what the Pentagon calls “Tranche 0.” According to an SDA press release, Tranche 0 will have 28 transport sattleties [sic] and 8 tracking satellites.

Transport, eh? Given that the US can transport most things normally, very quickly, there’s only one thing I can imagine requires space-based ‘transport’ – perhaps some kind of anti-satellite kill vehicle, or one of the new next-generation super-precise nuclear weapons. There is a non-militarization treaty about space, but do you expect the US to be bound by something like that, when they can say the Russians are cheating?

I’m curious how the detectors work. Presumably there’s a missile launch detector and some kind of additional detection on top of that when the hypersonic engine kicks in. Is there something particularly distinctive about those? Or are they optically searching for small things moving very, very fast? 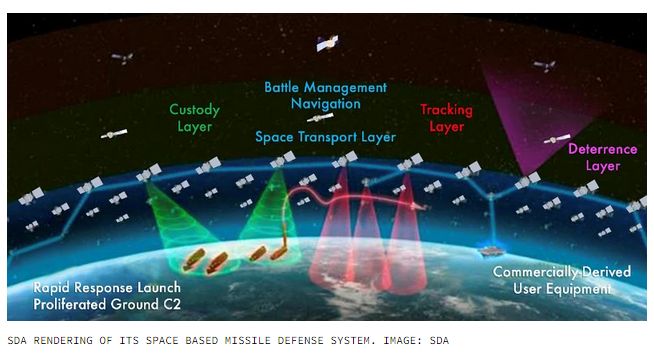 Whatever it is, it looks expensive

Welcome to the military/industrial complex, SpaceX! And fuck you thoroughly you traitors to humanity.

They will not find any alien spacecraft, but, if there were, I’d expect such a system to detect them.

Another possibility is that the “transport” is kinetic re-entry kill vehicles. What, in high school, we called “space spears” – you just drop a self-piloting piece of ceramic-coated I-beam on a target from orbit. It’s clean, it’s instant, and it’s lethal.

The SDA is a Pentagon agency tasked with weaponizing space for U.S. interests and defense.. “The SDA will define and monitor the Department’s future threat-driven space architecture and will accelerate the development and fielding of new military space capabilities necessary to ensure our technological and military advantage in space for national defense,” explained a 2019 memo creating the agency.

Good god, George Orwell was like Nostradamus. I can’t parse that into anything but, “weaponize space like we said we wouldn’t.”

A Late Endorsement » « Sunday Sermon: In Which I Argue With a T-shirt