A lot of the fancy knives you see get their distinctive fanciness from layers of metal welded and shaped together. That’s a high-risk option, because there basically aren’t any steels that expand and contract at exactly the same rate – and anything else means you’re stressing the blade with extremely powerful forces.

Sometimes it doesn’t work out. For example, if you do an edge quench, the back is expanded (it’s hot) and the edge contracts suddenly. Sometimes the springiness of the metal takes over and everything is OK and other times you hear a “CLICK” come from your quench tank. It gives you an understanding of why blacksmiths used to be so darned superstitious; this can happen even with carefully controlled materials and temperatures and it’s even worse when you’re composing your own steels.

When I was starting out with this stuff, I asked master bladesmith JD Hammersmith about wrought iron welded to 1095 and he replied “why would anyone want to do that?” I guessed that meant no answers were forthcoming from him. Generally knife-makers are pretty supportive as a community, so I assumed he was just trying to help get me over my silly idea. Since that time, I’ve done some pretty cool many-layer 1095/wrought iron damascus, and some successful san mai. As I said, Michael’s hubby’s blade came through with flying colors, probably because I worked on it while it was nice and thick. 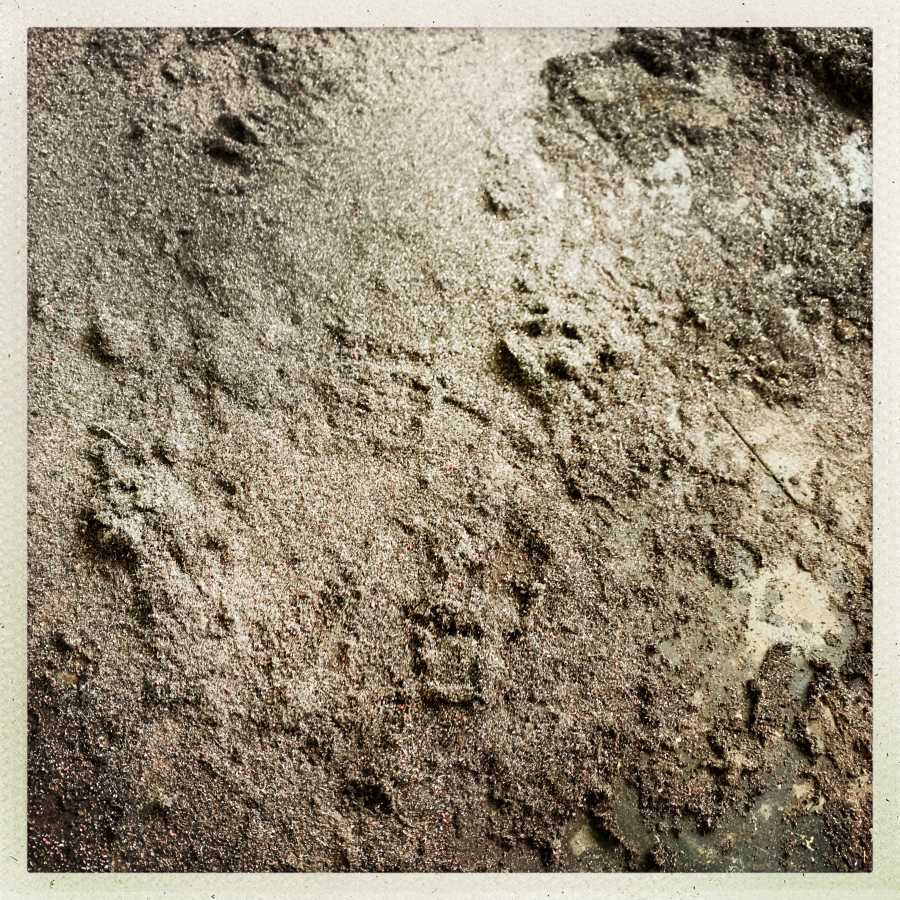 That’s what you do to un-thicken a blade. 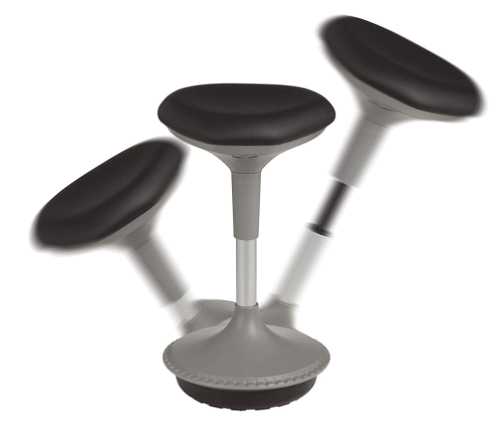 The sander belt (this was a 36-grit) tears big chunks of metal off with each pass, and flings them onto the floor where they smoulder and burn. Sometimes, if I’m not careful, it flings them onto the knee of my jeans, which also smoulders and burns. Usually I catch that pretty fast and pat it out with a wet cloth from the cooling jar (which is a vintage 1930s Moet-Chandon champagne bucket I inherited from a friend of the family) The grains, as you can see, are pretty big, which means they can carry heat a fair distance. Unlike high carbon steel, they don’t ignite and burn before they hit my knee, they do that afterward.

Mike Poor turned me on to a thing called a “rocking stool” for craftspeople. It lets you lean the whole stool forward and back, and it’s not possible to fall asleep in it. It makes you keep your shoulders back, too, which is good, since you don’t want to catch a sleeve in a sanding belt (that will wake you up in an awful hurry)

After about an hour of rough-shaping and further cleaning, it’s starting to look like a blade. 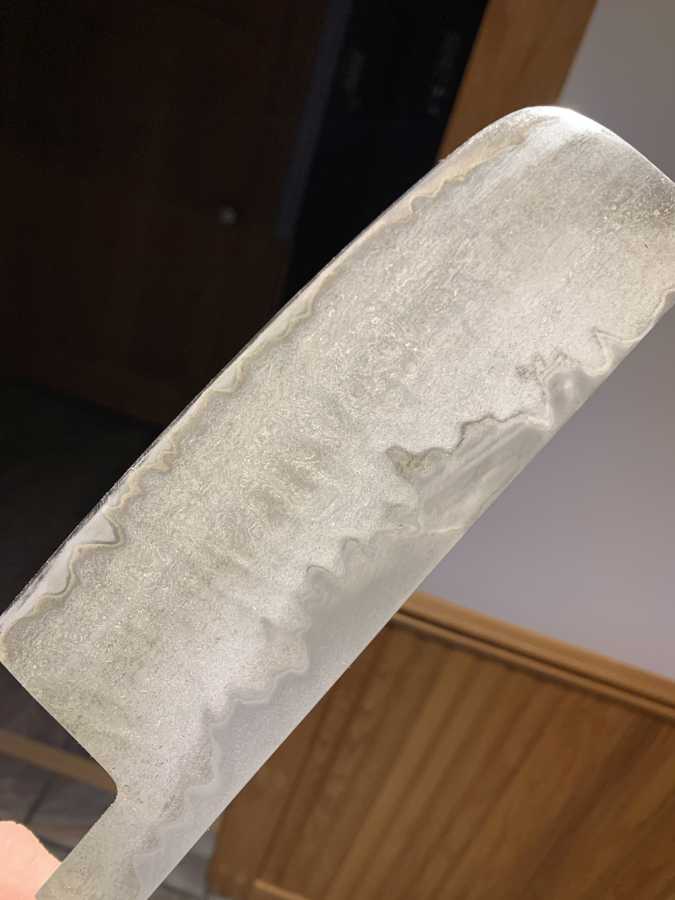 There’s a bunch of stuff going on there. First off, down at the edge, you can see the W-2 sticking out of the wrought iron. That has to go the full length of the cutting edge or it means I have fatally screwed up. I haven’t. The back also shows W-2 sticking out. I did that on purpose because, I dunno, I thought it would look tactical or something. But also, it was a side effect of working the blade thinner and thinner. A normal nakiri blade this size would be about 2mm across the spine, but wrought iron is unusually heavy and strong and if it was that thick the thing would feel clunky. I took a deep breath and tapered the back a bit at a very low angle, so it thinned the knife without thinning the steel supporting the cutting edge.

Shaping this and getting it ready to take an edge was about a day’s work, and eventually I got into successively finer sanding belts and started chasing scratches. You can’t make wrought iron take a mirror polish, but you can bring out the lovely glitters in the iron, so I aimed for that. Then, it’s time to think of a handle. Michael and I had already agreed upon bog oak and ebony because you can’t get much more tactical than that without upsetting the department of homeland security. 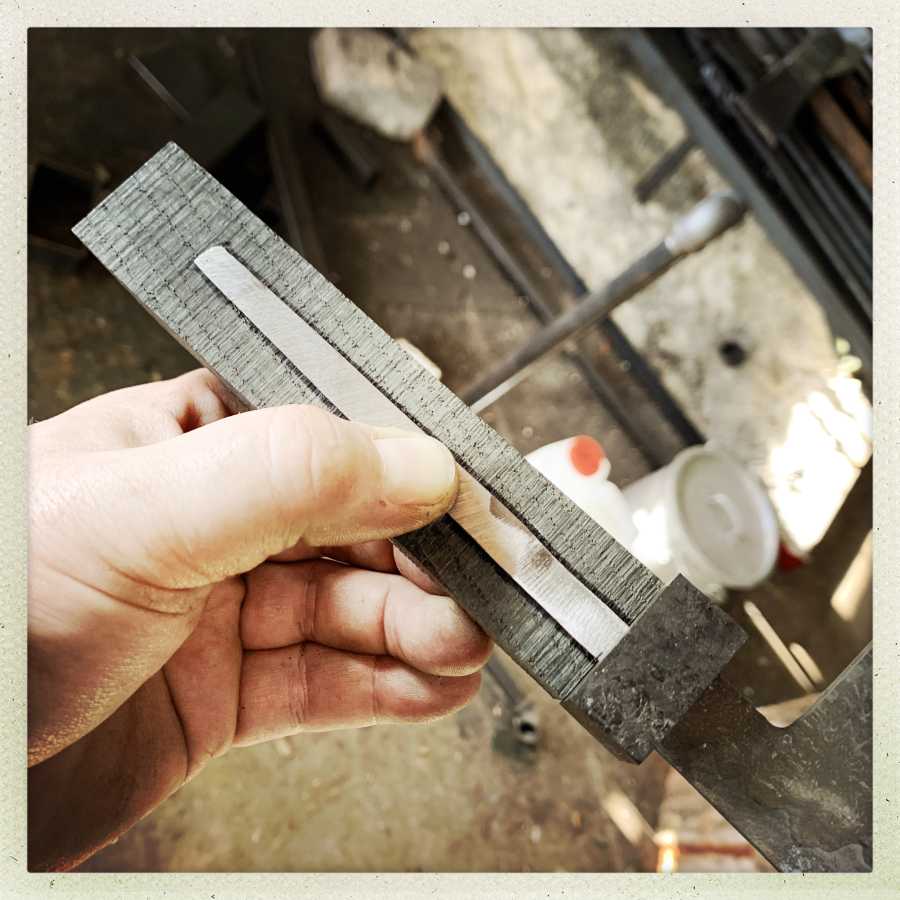 You’ll notice that the tang has gotten longer, again. I replaced the wrought iron/1095 extension wit an extension of pure 1095 (stronger!) and a fine art quality weld.

Now, Commentariat Member Lofty, who appears to know something about welding, may have winced when they read that, but for me, that’s a fine art weld. Seriously, it’s pretty lovely – I ground 2 45 degree bevels to meet, clamped it to a graphite block, then filled the space with MIG wire and sanded it perfect; you can’t even see it. It’s way up in the handle where it won’t matter, I just did that because I wanted some metal near the butt of the handle to help balance the blade. I thought about making a small side-pocket and filling it with lead shot but I thought that the heavy bog oak would make the balance OK. This is all “touchy-feely” stuff and I get really nervous with it because I might finish the knife and have to smash the handle off and try something else.

In this case I actually did that. The ebony block at the front was fitted very tightly (as one does) and when I assembled the blade with some epoxy, I was able to push down against it and the angle of the tang served as a lever and neatly snapped the ebony in half. So, you curse and wipe the epoxy off and make another bolster and it’s OK because sometimes the world is just like that. 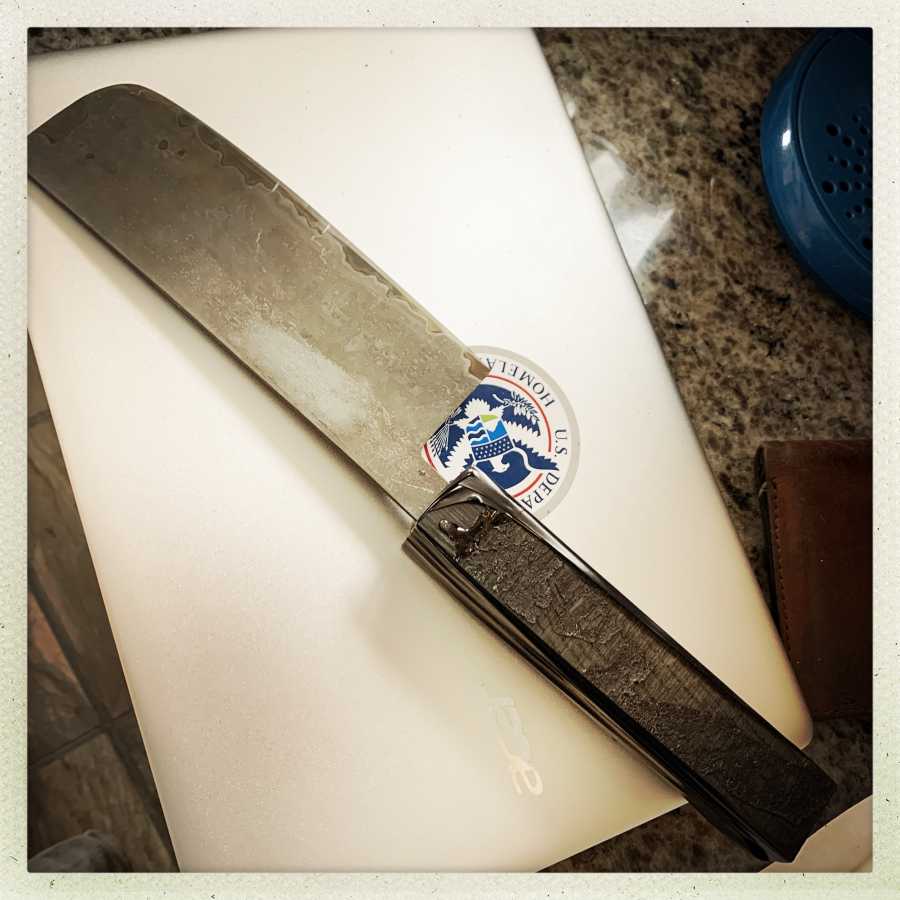 The epoxy is curing, under the electrical tape. You can see two little chalk marks on the blade. As I started sharpening it, I decided that the edge needs to be a bit thinner there. At this point in the knife’s life, I am into successive refinement; my object is that “every time I pick it up, I want to put it down better than it was.” It would be easy to hang onto the knife for months like that, but Michael might not appreciate that. 9/10 of this part is knowing when to let go and not push it too far. At this stage I’m pretty happy because it’s nice and thin, it’s taking an evil tactical edge, and the balance in my hand is good. 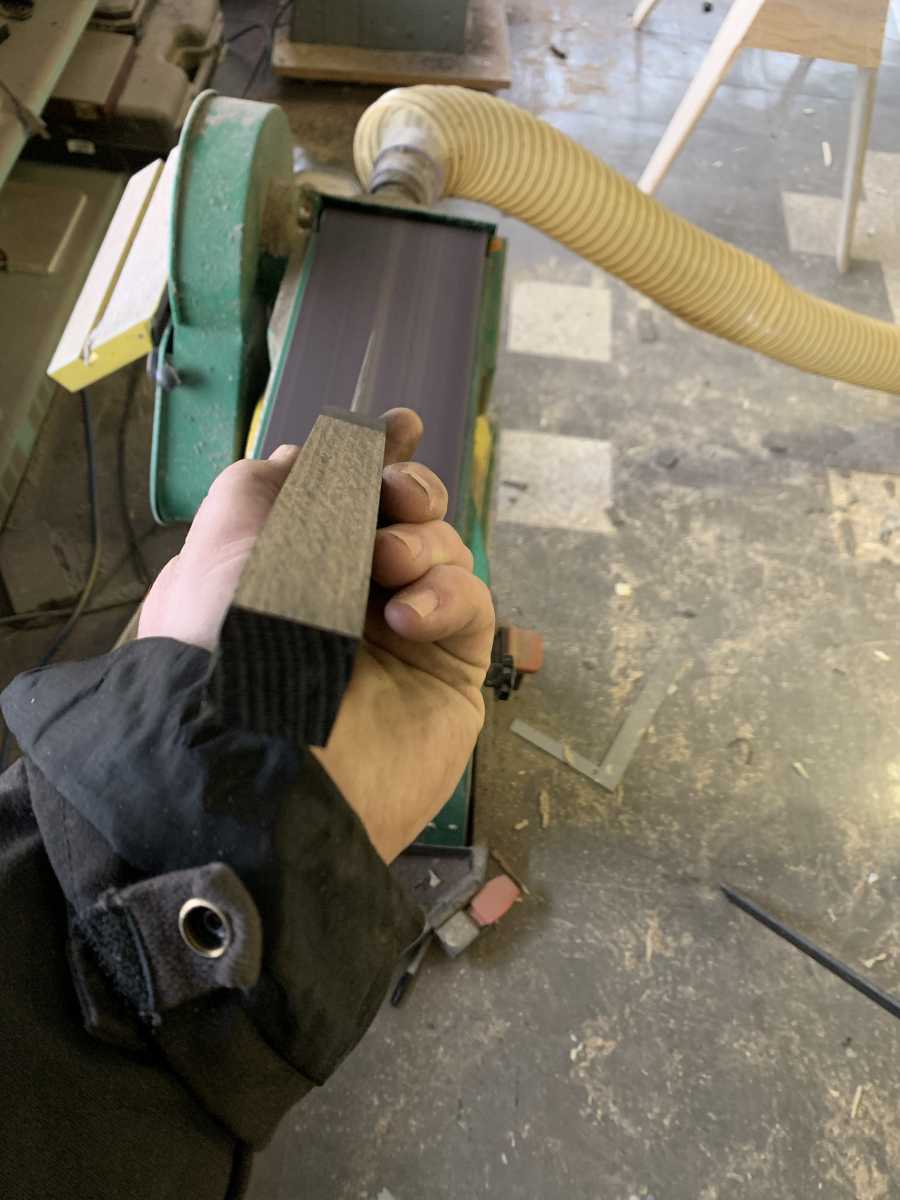 Shaping the handle is the last little chance to balance everything and make sure everything is in line. As you can see, the blade is pretty thin, but there is room in the block around it where I could adjust it by a tiny bit or two.

I have a method I use for the handles, which is to rough shape them on the 6×26 sander, then switch to hand sanding for final tweaking. I have a Foredom tool (like a big Dremel) that I can use to polish the front of the bolster and whatnot. Mostly, I am trying to get the shape of the handle right. I try to shape my handles for fit and to be imperfect so that they are interesting and don’t offend the gods. Joking aside, I find that I like the feel of a multi-faceted handle but if it’s made on a milling machine or a CNC machine, it’s too sharp-edged and soulless. Once that’s done, the knife is now “a knife” (in spite of the fact that it has had a killer edge for some time) and it’s ready for a few coats of oil and wax and oil in the handle, and then it gets boxed up and trusted to the vagaries of international postal services.

Yesterday I had confirmation that it had made it to Australia OK, through customs, and it’s now out of my hands. Fly, little tactical bird! 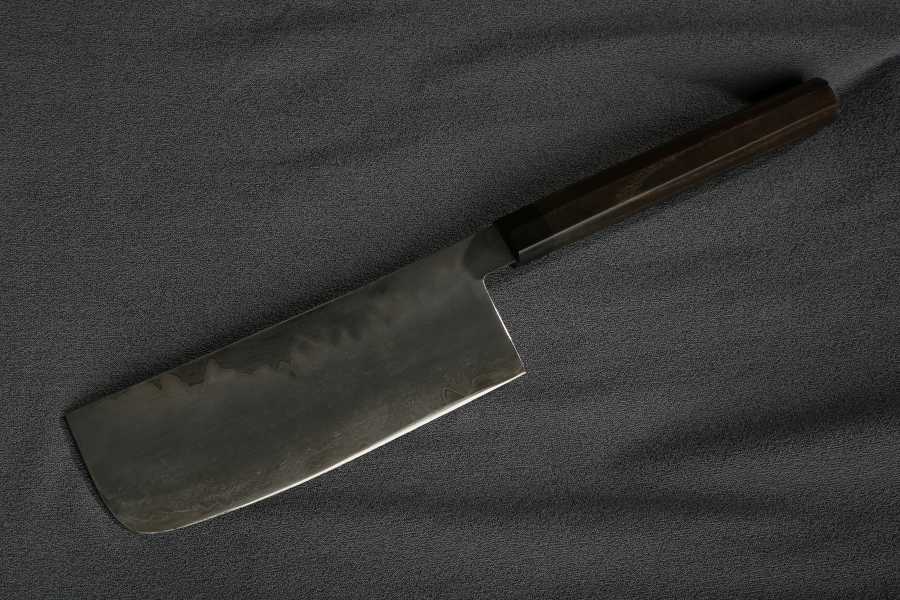 This is what the wrought iron face(s) look like, polished and etched: 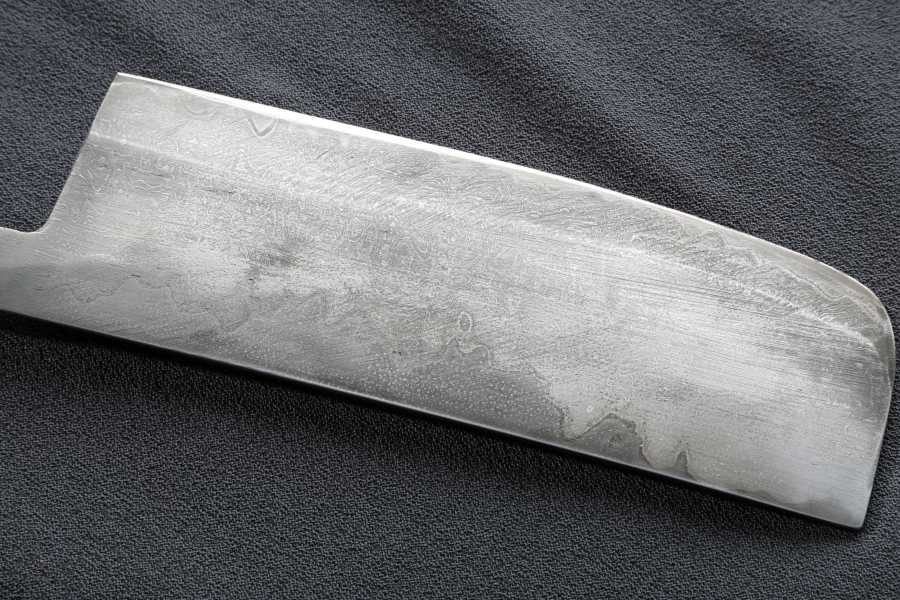 The swirlies in the wrought iron are not layers of damascus; they’re strands of silicate stirred into the puddle of wrought iron when it was molten hot sometime around 1890. As I forged them out and stretched them, they got thinner and that caused the sort of “puddled water” look. If you look where the 1098 and wrought iron join, you can see all sorts of interesting edge effects (far enough from the actual edge where it won’t matter!) that’s carbon migration from the 1095 into the wrought iron at the weld line. The up-and-down of the edge is the result of the deep cuts I ground into the stock piece, back before I welded them together, in mid January, weeks ago.