This is the story of a commissioned piece.

Usually, when I do a commission, I send pictures and design notes as the thing is under way. When it gets to the point where it is starting to look finished, I stop sending pictures and get all mysterious; I think it’s important to have an element of surprise. It seems like a fun way to do it.

Michael D asked me about a Japanese-style cleaver for his hubby. He sent me a picture of the sort of thing that he thought would be cool: 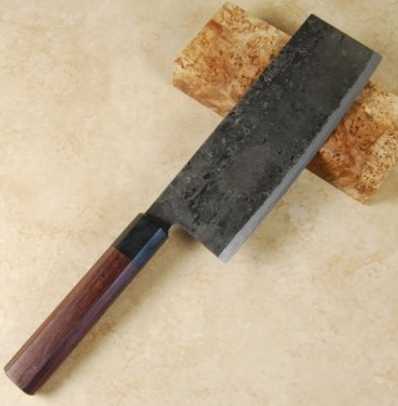 The hammer/scale forged sides made me think of wrought iron, and the san mai (three layer) construction seemed like it’d be cool, too. We bounced some emails back and forth and agreed on: ebony, bog oak, wrought iron, and W-2 high carbon steel.

Wrought iron is great stuff but it has some problems. It’s heavy. It’s got to be worked at welding temperature or it’ll crumble, and it will bend like a noodle if you hammer a lot of stresses into the metal and don’t normalize and carefully prep it for quench. I made sure to warn Michael that this would be an attempt, but not guaranteed to work, but I was game to keep trying until I got things right.

There are two issues in making a san mai blade out of wrought iron: one is the curlies, the other is that you really have to stretch and hammer it out to get it thin(ish) which means you either produce something that will try to turn into a noodle or you make something thick and accept that you’re going to spend some time with headphones on grinding off a lot of wrought iron. The nice thing about wrought iron is that it grinds like cheese once you’ve got it all shaped. There’s a lot of metal to take off but it’s fun to work with. 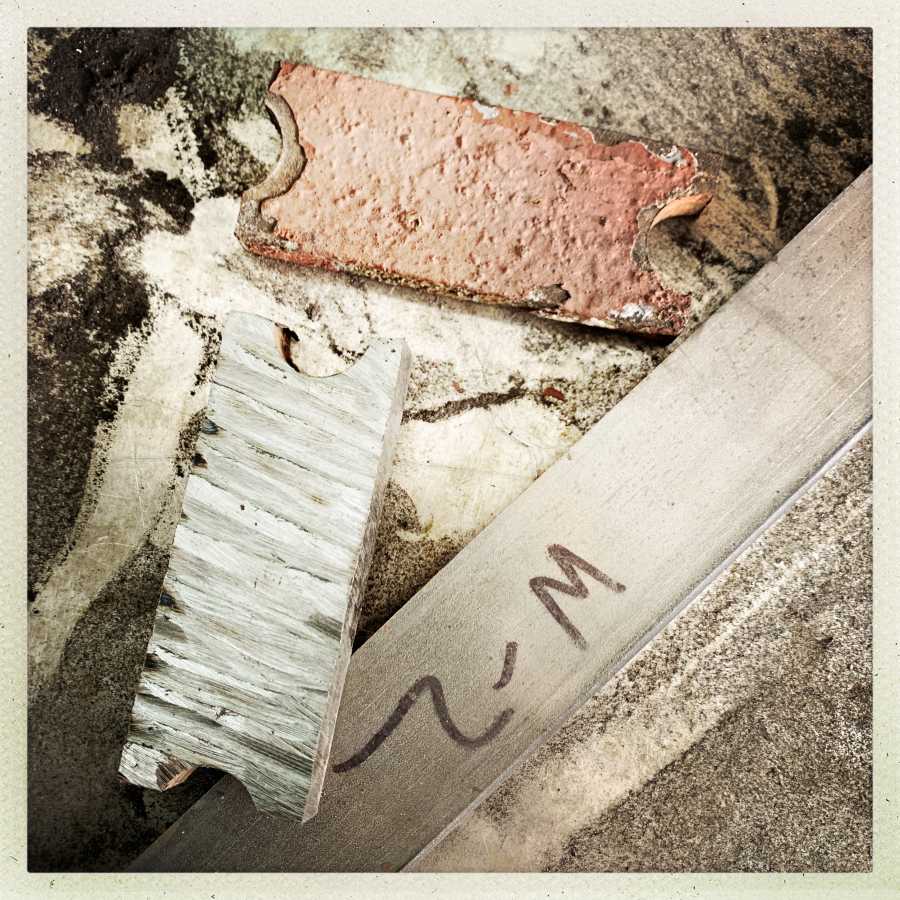 That’s the raw materials: two chunks of victorian wrought iron and a chunk of W-2 high carbon. The wrought iron has been conveniently painted with lead paint, which I ground off. I textured the surface(s) of the inner sides of the wrought iron so that it would have more “wavies” where it welded to the W-2. All waviness in the blade materials is going to get magnified because the blade will be drawn out a fair bit, which will make all the pieces thinner.

The big challenge at this point is to weld it so that the W-2 remains neatly centered in the resulting bar. Since wrought iron doesn’t harden, it can’t take an edge; that means the W-2 has to form the edge and it can’t deviate so far that the edge gets lost. I use a dirty trick I came up with for that: I don’t ever hammer directly on the edge – that way I can see the bit of W-2 sticking out and, when I form the final blade, I can just cut back until the resulting edge that is formed consists entirely of W-2. 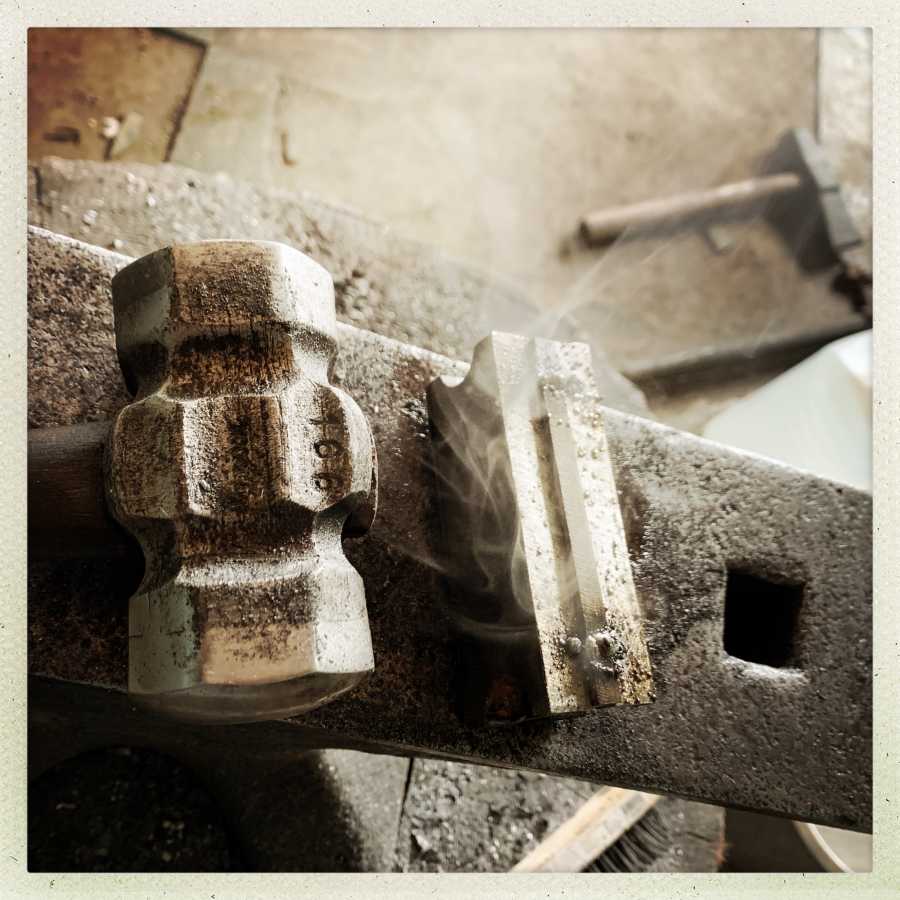 See, the W-2 is sticking up, so I won’t lose it. Once the metals are all ground clean, I tack weld them and soak them down with WD40 to reduce oxidation, then it’s ready to go into the oven. 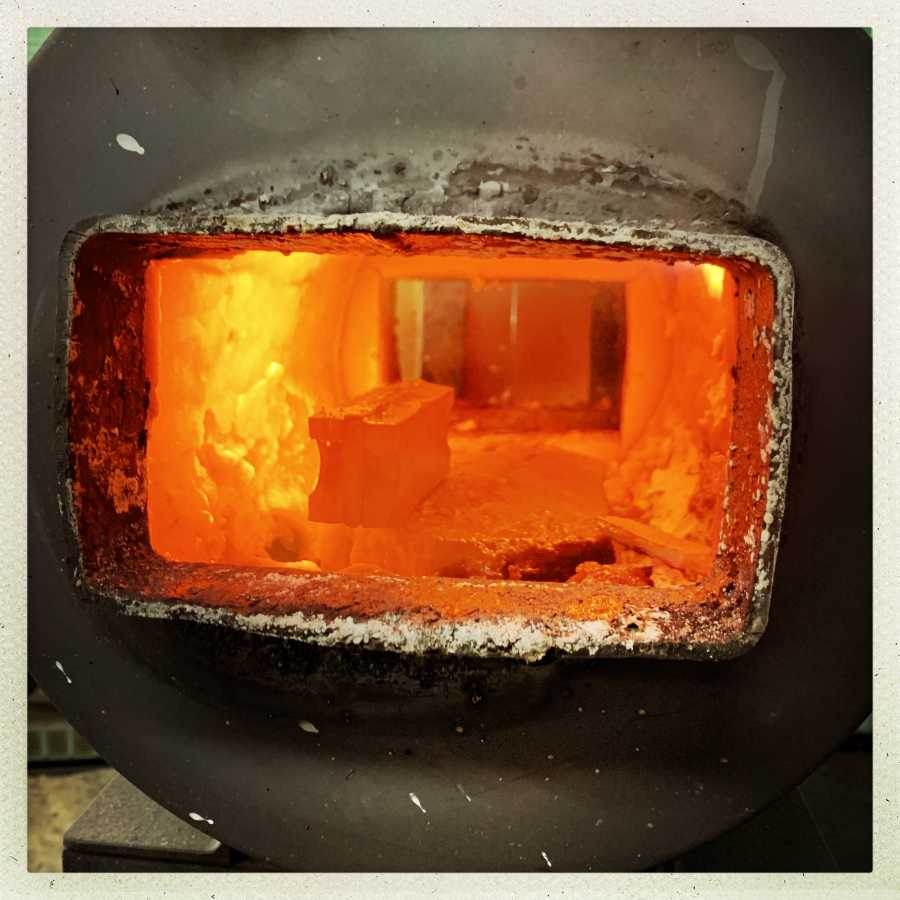 It looks a bit greasy and wet; that’s the borax flux covering it to keep it from oxidizing a lot while it comes to heat. The far side of the forge is at welding temperature; the block in the middle is merely warm. If it were normal steel, I could be working it but the wrought iron needs to be a lot hotter.

I’m looking at the dates on the files and that was shot on 1/21; so it was probably pretty chilly out. The roaring of 12PSI of propane going into a combustion jet is comforting and the combustion gases shooting out of the forge make the room about 80F in a few minutes. 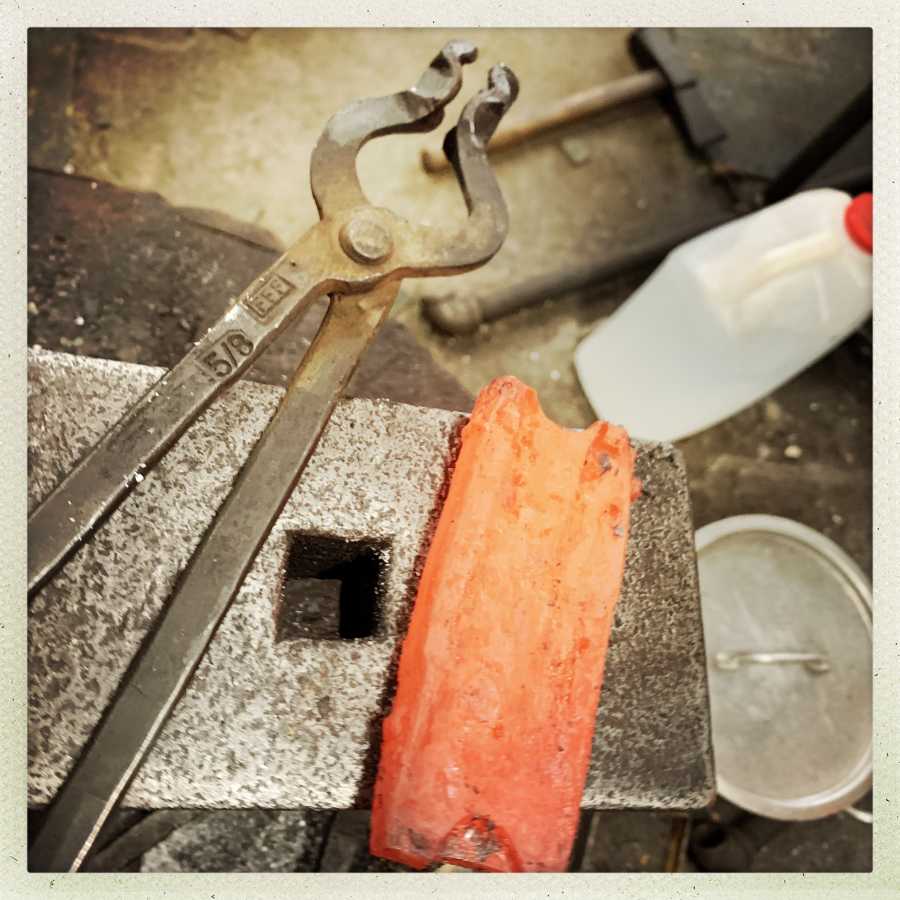 When it’s welding temperature, you flux it up and walk a series of solid whacks down the length of the piece to set the weld. Then, you can start “drawing” it – stretching it and pulling it into the shape you want. Most of that is done using the hydraulic press, with various fullering dies. This fullering die drives the steel left and right. I have others that drive it forward and back. What you usually do is get it the right width then stretch it until it’s the right length and then shape it into a blade. 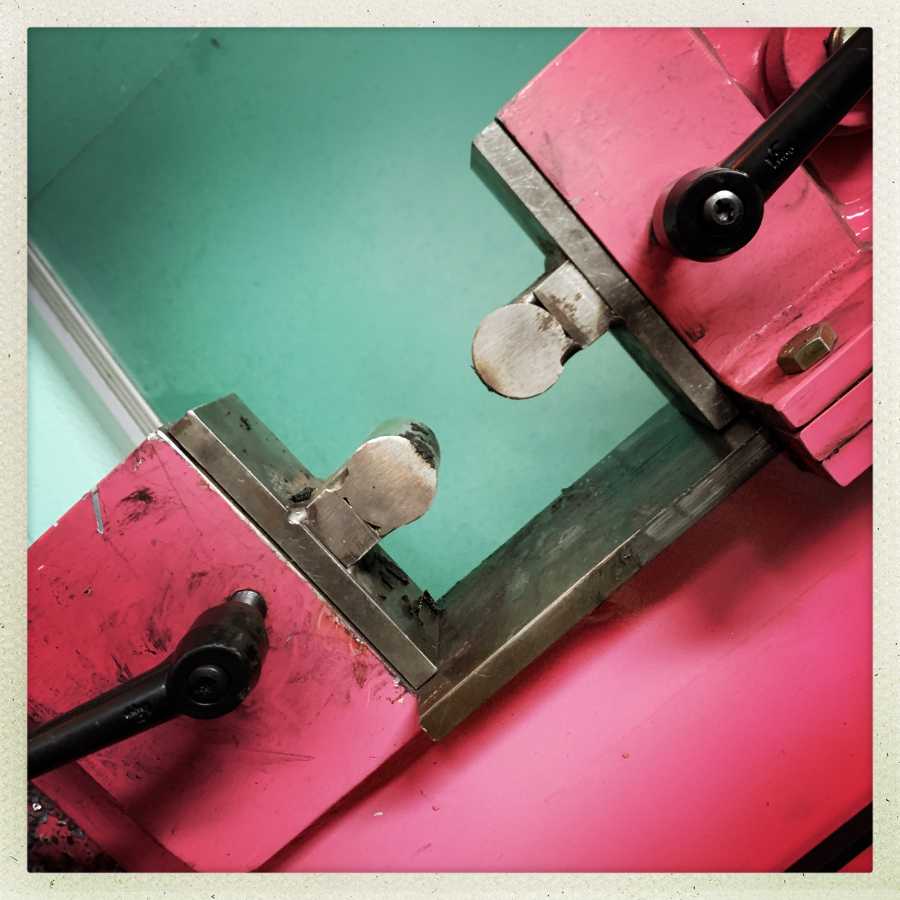 Old school blacksmiths would use a “fullering hammer” or a “cross peen hammer” which has an end for driving the metal in the same way. Using a press is great for two reasons. First, you’re not wearing your shoulder and elbow out, but secondly you can work much faster and that means the steel gets less time to cool so you can work it longer. With wrought iron that’s a big deal – you need to keep it yellow hot or it will crumble. 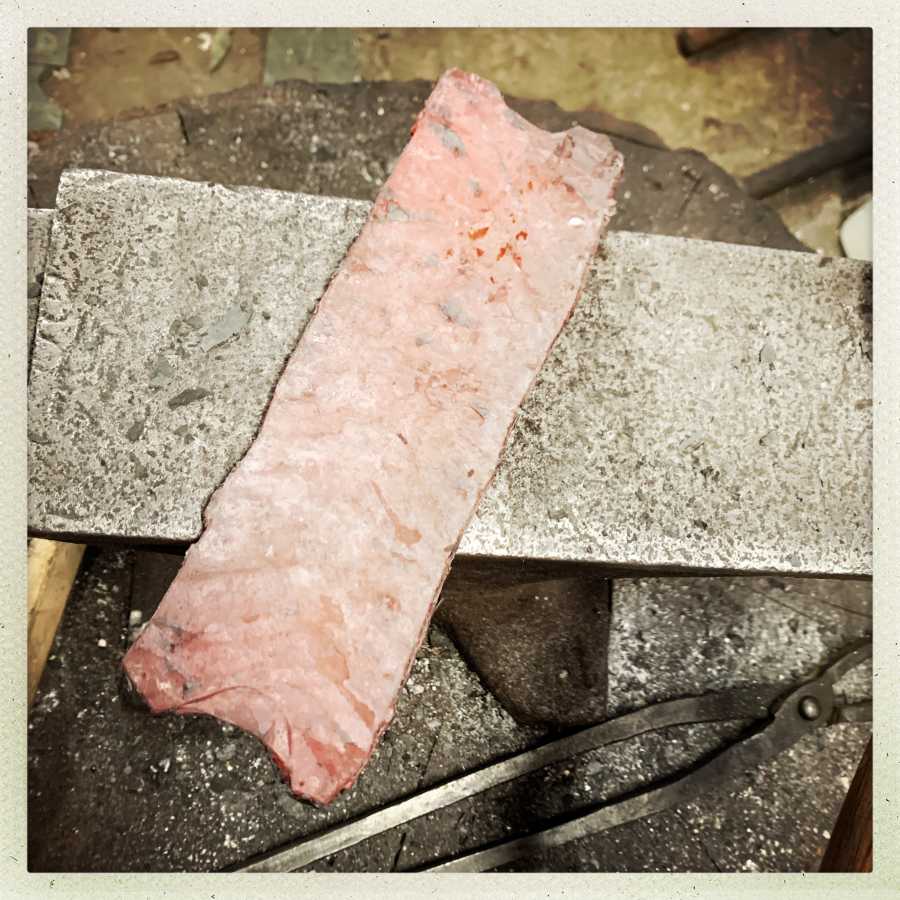 Look at the right edge and you can see the edge of the W-2 still sticking out! Now, it’s about 2-3mm thick and I can keep looking at the edge and smushing the metal so it stays centered on the bar. There’s a lot of divots in the surface and those will get worked out with a mix of a flat die for the press, and my hammer and muscles. 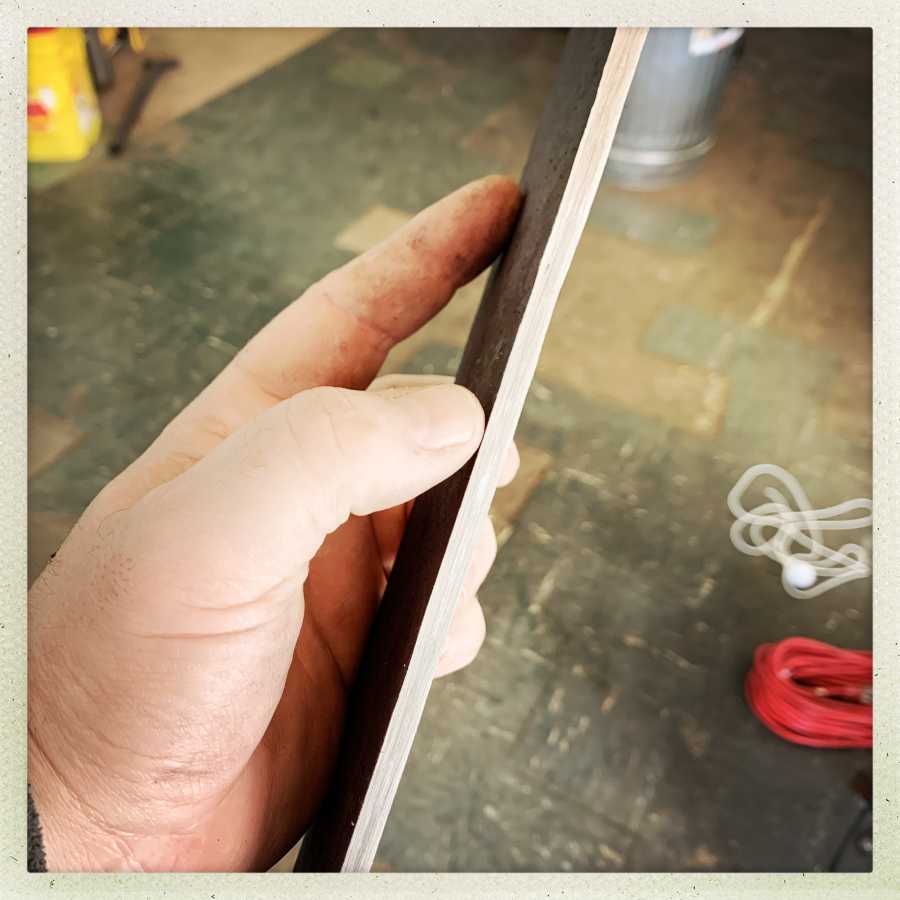 When it’s getting to the point where it’s ready to get bladey, I grind back the edge and etch it in some acid to stain the metals. It’s a bit hard to see but in the picture above you can see the W-2 is where it’s supposed to be, right down the center. That means it’s about ready to go, so I let it cool slowly (anneal) overnight so the steel doesn’t harden and become unworkable.

The next day, it’s time to lay out the blade: 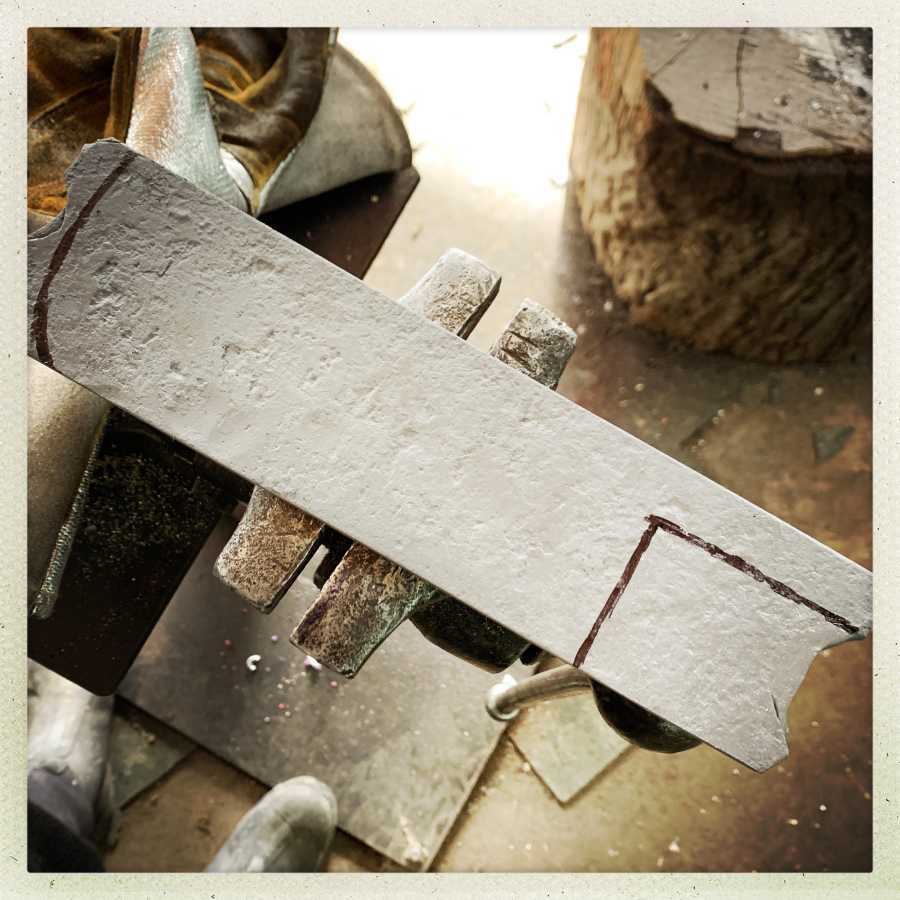 I could have formed the tang by hammering it, but that would have risked pushing the center of the steel off the center-line. It was easier to get it straight and flat and work from there.

The piece that got cut away (with a diamond cutoff wheel) I cut in half lengthwise and MIG welded to the back of the tang to extend it a bit. At this point, the steel is 4-5mm thick. I don’t have to worry about anything bending or breaking. Then, it’s over to the angle grinder and sander to clean up the surfaces and see how everything looks before we go farther. 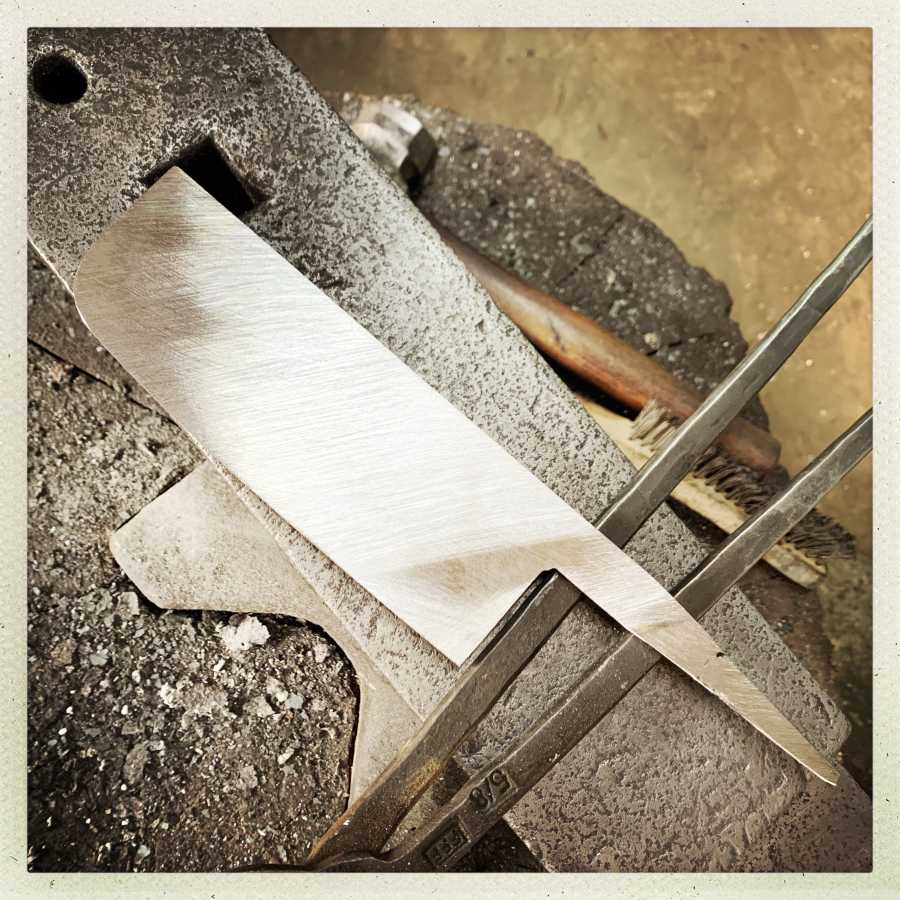 The next part of the process is nerve-wracking: rough shaping and quenching.

Normally, when you quench a blade it’s pretty simple because you’re using fairly compatible versions of steel. This blade is an iron/steel/iron sandwich; it’s not that simple. To quench it, the W-2 edge has to be exposed to the quenching oil so it hardens, which means I need to grind back the wrought iron from the edge so the W-2 is exposed, then I’ll do what’s called an “edge quench” – I’ll normalize the metal to relax it, make sure it’s straight, then heat it to quench temperature and put about an inch and a half of the cutting edge into the oil so the edge hardens but the back doesn’t warp. Normally, the goal would be to keep the back soft but in this case it’s to keep the blade from bending like a piece of pasta. When you do an edge quench you get the edge in the oil, count to about 15, then clamp the back/center in a vise and let it cool.

If everything turns out right the edge is hard, the back is soft (it will be: it’s wrought iron) and the whole thing will be straight. The thicker it is, the straighter it is likely to be, but the more I have to grind off. It’s all tradeoffs.

I don’t have any video of the process because you need 2 hands and my video camera’s battery was dead, so you’ll just have to trust me: it came out hard and straight and strong. From there, it’s downhill. I could drop it and chip the edge, or I could mis-grind it, but I’m going to be careful and not do any of that.

I’ll post the second half of the process in a bit.

The commission for this piece went to the FTB defense fund. I currently have 2 other commissions in queue, so if you are interested in a blade, you should probably hold off asking until summer when (hopefully) I have the new forge fully operational. Right now I’m working on three different things at once and it’s hard for me to prioritize.

A note about blade geometry for a nakiri: this is not a cleaver. It’s a slicer with a high side so that the cook can do things like flick vegetables from one side to another. Note the difference in the tip of the original image Michael sent me, and the one I did. The rounded tip is going to be way more fun to grind and sharpen, but it’ll be less likely to harm its user. This will be heavier than a typical “sushi knife” because of the depth of the blade, but it’s going to actually be pretty thin. That’s alright because the wrought iron will be ungodly tough. If you want to think about it this way, the blade is a wrought iron holder with a razor blade welded into it.