In 2001 (or thereabouts) I attended some health and safety events sponsored by the Alliance of Professional Tattooists.

AIDS devastated the tattooing community in the 1980s because it was not understood (initially) in that community that blood serum could contain viruses. I had a tattoo done in the 80s and I recall the artist blotting away leaking stuff with a paper towel that wound up in a trash can. Sometimes at a tattoo convention you might see things that’d make you cringe: a tattooist working on a subject sees a friend, jumps up, hugs them, then goes back to work still wearing the same latex gloves – that kind of thing. I was there to learn and observe and that was enough for me.

One of the lessons in the health and safety class involved hand washing. The point was: we don’t wash our hands very well; disposable latex gloves are better. Also: don’t use your gloved hand to take off one glove, then use your bare hand to slide the other glove off. Peel the first glove down about halfway then use the fingers (still in the glove) to grab and peel off the other glove, then use your ungloved fingers to grab the first glove from the inside and flip both pairs of gloves inside out and throw them away.

If you want to wash your hands: learn how to wash your hands. Lots of soap and scrubbing and water, use a paper towel to work the faucet controls and open the bathroom door, then throw the paper towel in the trash while holding the door open with your foot. You have to work hard to get around your fingernails; that is a particularly difficult region. My cuticles and fingertips are so roughened that the skin is cracked like concrete. It’s probably impossible for me to wash my hands adequately so, if I needed to disinfect them, I’d probably just go for a bleach solution. 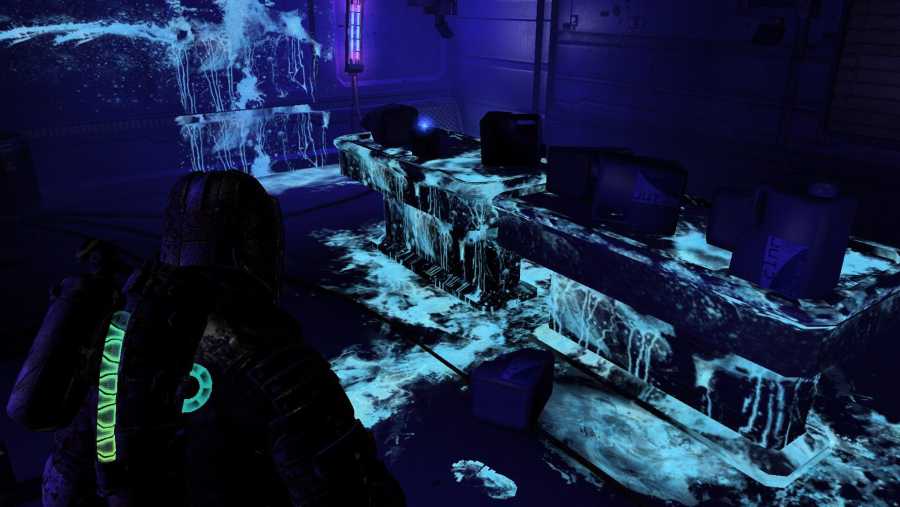 [frame from Dead Space 2. Not a real crime scene.]

The final lesson was best summarized as “you suck at washing your hands.” Our instructor went around the room with a little bottle of luminol oil. It’s just oil, until you shine an ultraviolet light on it, which makes it flouresce a bright green. We each got a dollop and were told to rub it on our hands, then go to the bathroom and do the best job we could at washing our hands. Off we traipsed. Then, we came back and the instructor went around the room with a UV flashlight, looking at people’s hands. One guy’s beard looked like it was dripping with luminol. Another guy had rather obviously sudsed the oil up and then wiped his hands on his shirt.

Then, we went to the bathroom, and the UV light showed faucets covered with luminol, door handles, sinks, floors – it was everywhere except the ceiling. It was a serious reality check.

I would not encourage panic about the coronavirus but this would be a good time to talk to people about hand washing and not touching your face. Half of the people in the class had fingerprints on their faces. It’s a good “teaching moment” that goes a long way toward illustrating how badly we do at this stuff. You can get UV ink pretty easily, and there are hundreds of sellers on Ebay that offer ultraviolet flashlights. Here’s another suggestion: if you get an UV flashlight, do not shine it around a hotel room. Just … don’t.

This would be a fun interactive learning opportunity for people you’d like to turn into germaphobes.

I do a lot of painting (I hate painting!) and usually it’s another good case study of “how bad we are at controlling liquids”. One trick that has stood me in good stead is to save the plastic shopping bags from the hardware store; if you need to take a paint roller off a handle, just put a shopping bag over it, then do what you need to do, and throw the whole thing away. Entire kitchen trashcan liners can be used to protect your arms; just pull them over and do a viking weave of vinyl tape around them.