As I’ve gotten older, I’ve become more fond of using sensible leverage and supporting systems, instead of just lifting things into place and holding them with brute force as I fumbled for fasteners.

I think the first situation where I assembled something difficult without using strength was back in 2009, when I assembled an industrial sewing machine that came over in a big crate from China. The machine’s head was a daunting casting that weighed probably 200lbs, yet it was precision machinery. Dropping it might reduce its value to zero dollars in an instant. Instead of lifting the head and somehow balancing it long enough to bolt it to its table, I assembled the machine sideways, with the table lying on the floor, and the head on a pallet with a set of small jacks under it. I used the jacks to raise the pallet to the right height where I could shove the head over, align the bolt holes, and do the deed. After that, it was pretty easy to lift the whole thing upright because the stand and the head acted as a lever, giving some well-appreciated mechanical advantage.

Lifting the doors of the hot shed into position would have been something that Past Marcus would have done by putting the toe of a boot under the door, lifting, and then something or other figuring it out from there. Nowadays I use a technique I learned from printers back in the 1970s – to lock lead type into a frame, you use a pair of interlocking wedges that have a key-way between them; it’s called a printer’s “coign” (I suspect that “coign” derives somehow from the French “coincer” or “pinch”). To get the beams into place, with the hanger bolts in the right place, and not have to hold them, I used plywood mated wedges: 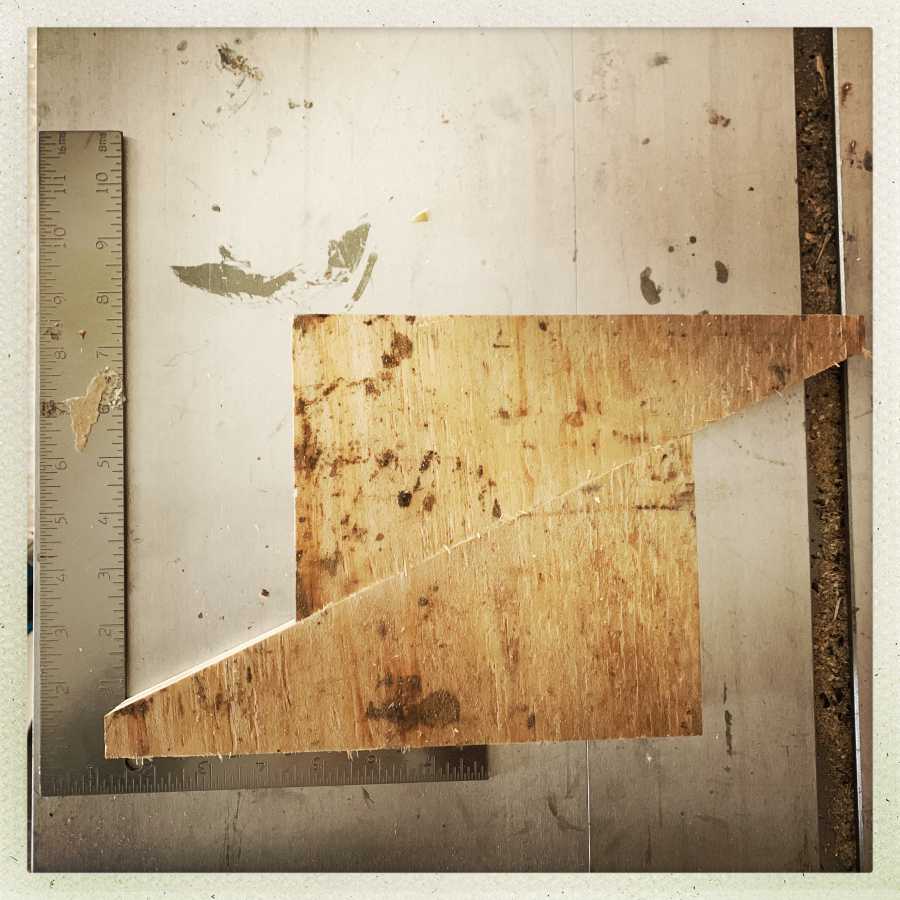 You can see how, just by whacking the end of the wedge, you can smoothly lift the other wedge straight up and collect about 3 inches that you don’t have to hold. I’ve seen floor-beams of old buildings in Europe held similarly; you tap it into position and nail it in place and it’s not going to slip. This is why you do not just go around pulling out nails unless you understand thoroughly what they are holding.

That’s how lazy Now Marcus does things. A few years ago I would have gone to all the trouble of getting my machinist’s screw-jacks near water and then cleaning them up again afterward, but I have a lot of cut off ends of plywood lying around right now. 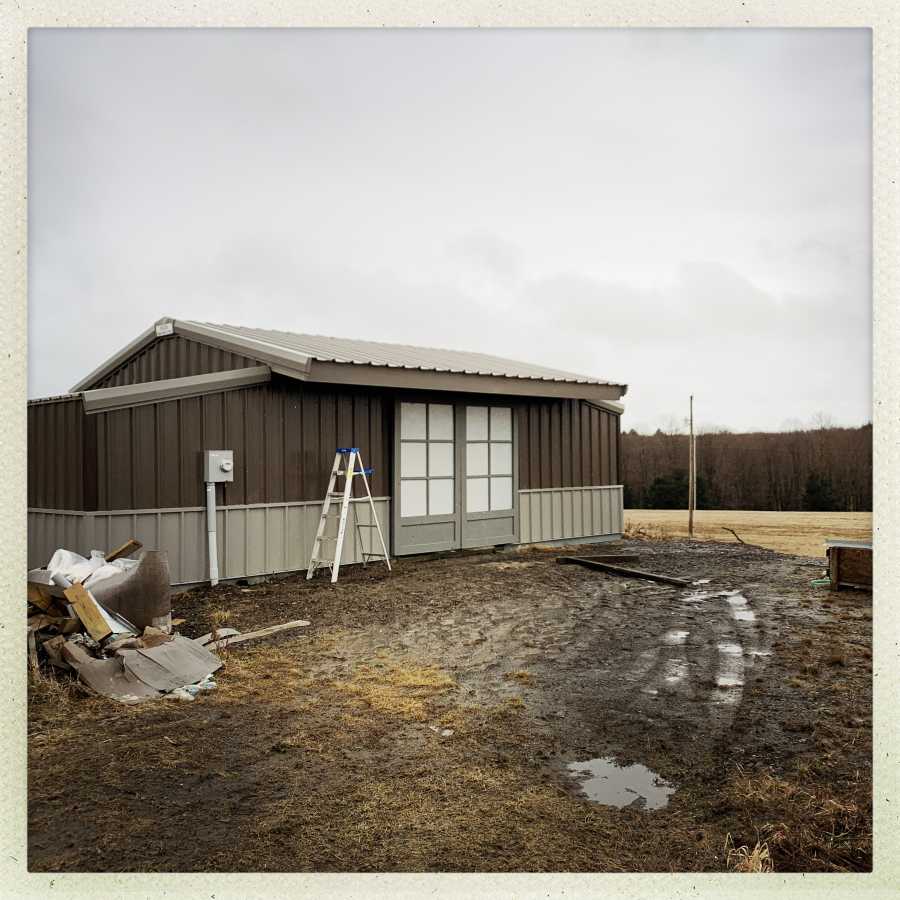 They are even mostly symmetrical and the J-rail is level enough that they move freely with very little effort. I need to make a rain baffle at the bottom, to catch the drips and to run in the keep-away rollers that I will eventually screw into the side of the slab.

The entire character of the building has changed; the wind no longer howls through it, in one side and out the other. In a few days it’ll be dry inside and I can sweep the floors and give everything another coat of WD-40. In the spring, I’ll put a gutter up over the door side, to direct some of the water away into the field. My first inclination would be to use one of those Japanese hanging roof-drains, but unless I wanted to make a whole channeling system on the ground to deal with the water, that’d just be a pain in the neck.

It occurred to me that I could hop in my time machine and invite some of my blacksmith friends to contribute a door handle or a latch, except I’m afraid I’d wind up with a 60lb door-latch, or a handle shaped like a steel pengu. I’m going to keep this one simple.

I was talking with someone once who said that they always felt sad when a project ended – a sort of post-partum depression; they asked if I had ever felt that way. “No, for me, it’s just that my TODO list is one item shorter.”

When Death comes for me, I expect to get several deferrals on account of the length of my TODO list. They simply can’t take me until I knock a few more of these projects off.

I was so energized by this small victory that I ran over to the shop and turned the handle for my carbide holder chisel. That went well, too – I got a chance to see how the mega-gouge and skew chisel work, and I’m happy to say that the damascus blades carve wood like it’s butter and hold an edge very well. My regular lathe chisels need to be resharpened every 20 minutes of use; the mega-skew chisel held a shaving edge through the entire hour or so of carving. It also felt super positive to have such a long handle with so much leverage and such a wide edge. I’ll post some pictures of the carbide holder when I get a chance to chuck up a piece of wood and see if I can find a bowl hidden within it.