As they say “a bad day fishing is better than a good day at work.” So I can hardly complain. But I’m going to make some whiny noises anyway.

One of the things I have wanted to try for a while is bowl-turning. I have a nice wood lathe that I hardly get any use out of, and tons of cool wood and stuff. I have some nice old turning chisels I inherited a decade or so ago. So I went and did an inventory, looking for a bowl gouge. I was thinking “it’d be cool to have a kick-ass damascus bowl gouge.”

Oh, wait. I know a guy who makes blades! A bowl gouge is a blade! Therefore…

That’s the sound of another project coming on. So I took down some pieces of cocobolo that I had stashed away, which happened to be exactly the right size. It’s as though past self had forseen future self’s needs. Pretty quickly, I had a plan. First, I was going to make a bowl gouge out of some of the twist damascus I made the other day, and then I was going to make a bar-mount for a carbide cutter-tip using a bar of the suminigashi I presciently made up last week. It doesn’t get any better than that; it really doesn’t. I even have a box of carbide cutters for an old face-mill that I don’t use – I can just tap and shape the suminigashi bar and fiberglass it into a cocobolo handle and I’ll be ready turn wood as smooth as glass. Perfect!

Step 1 was to butterfly the cocobolo with the bandsaw, and clean it up on the belt sander so it’s nice and flat. 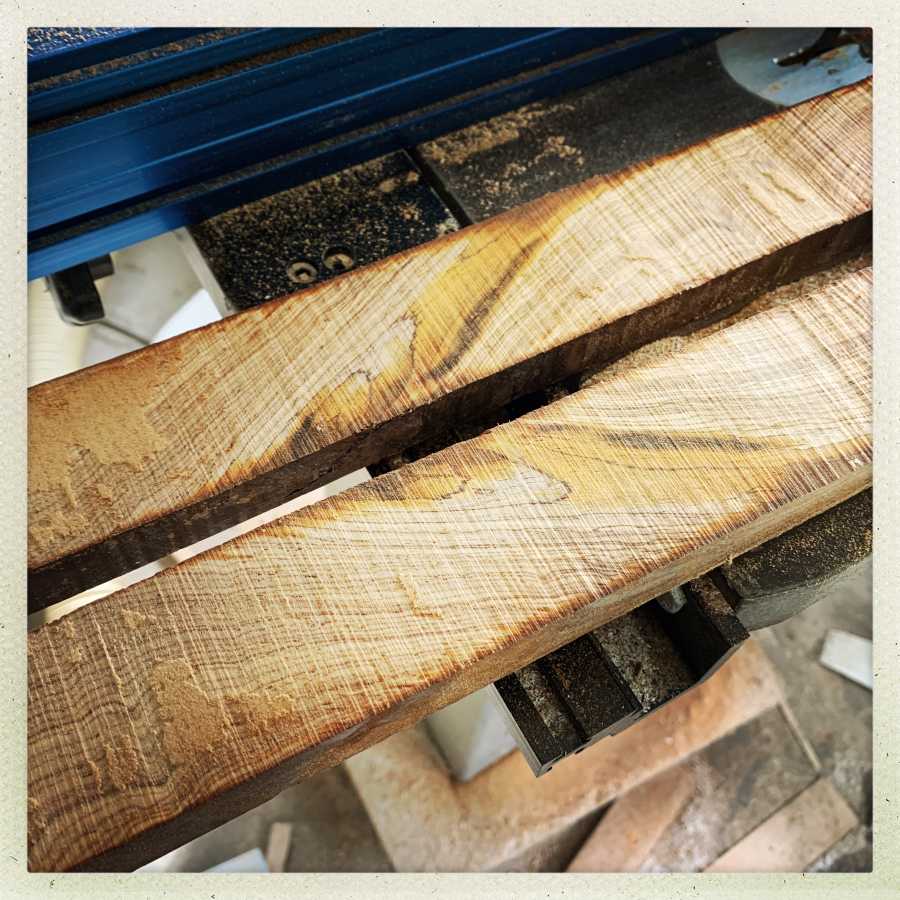 Looks kind of “meh, OK” right? But this is with just a coarse sanding grit, just to clean it up a bit. 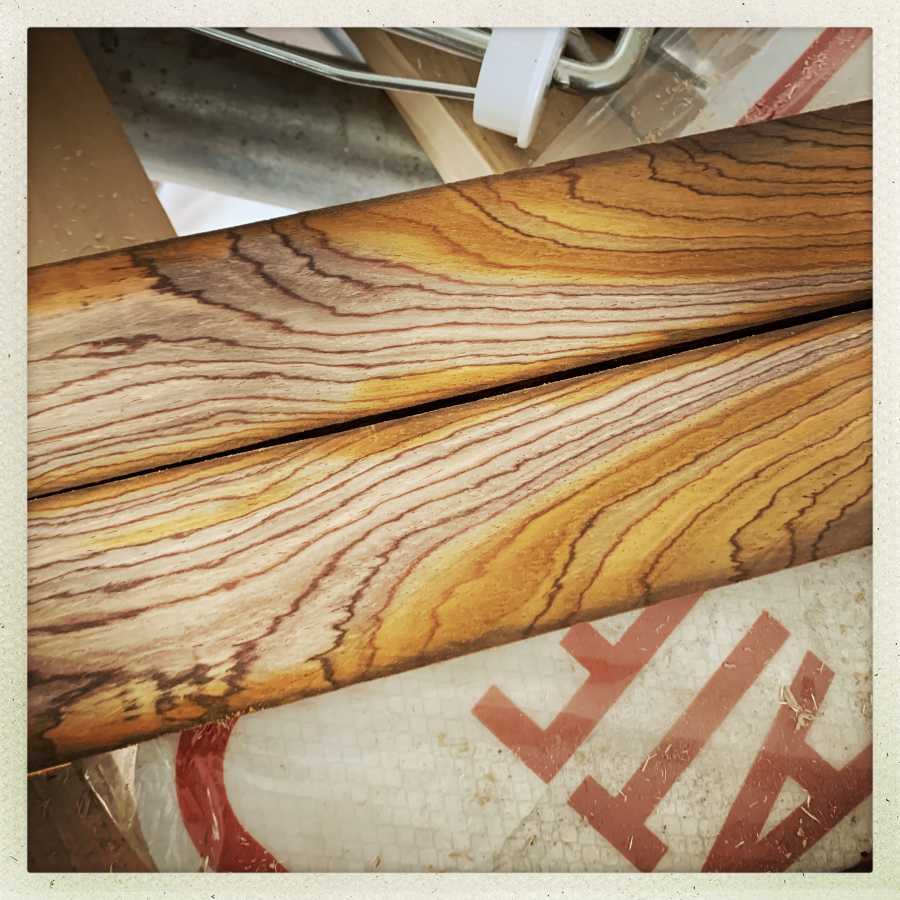 The cocobolo is a dense as rock and takes a great polish. It’s going to look fantastic with a great big bar of twist damascus sporting lethally sharp carbide at the end sticking out of it.

Step #2 is to forge out the suminigashi into a 1/2″ square bar. That’s a bit of a problem because it’s not in anything like that form: it’s a 12″ x 2″ by 1/4″ bar. Well! That’s not a big problem! All I have to do is cut it it half lengthwise, stack it and weld it, maybe throw a twist or 10 in, and forge it down to the desired shape. I won’t say “piece of cake” but this is something I know how to do. I can practically put my brain in “park” while I’m doing it.

… and that was my first mistake from which the others followed. It just took a while to develop. You’ll see.

By the way, I was totally in my happy-zone the whole time. This was a project for me! I get to be as casual or exacting as I want to be. OK, that’s a lie; if I was just trying to get the job done, I have some nice 1/2″ x 1/2″ square O-1 tool steel rod, that I could use and have the job done by noon. But why not use that lovely damascus bar? 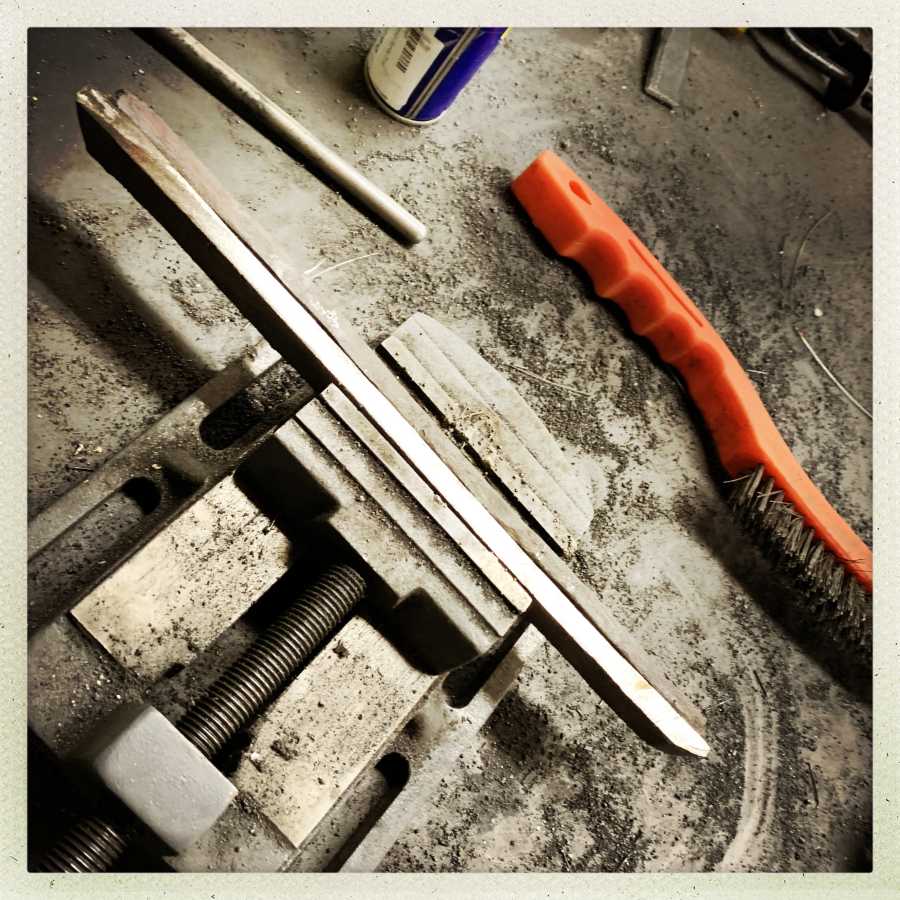 Cut and cleaned, ready for tack welding. Then it’s into the furnace to heat up for some welding and twisting. 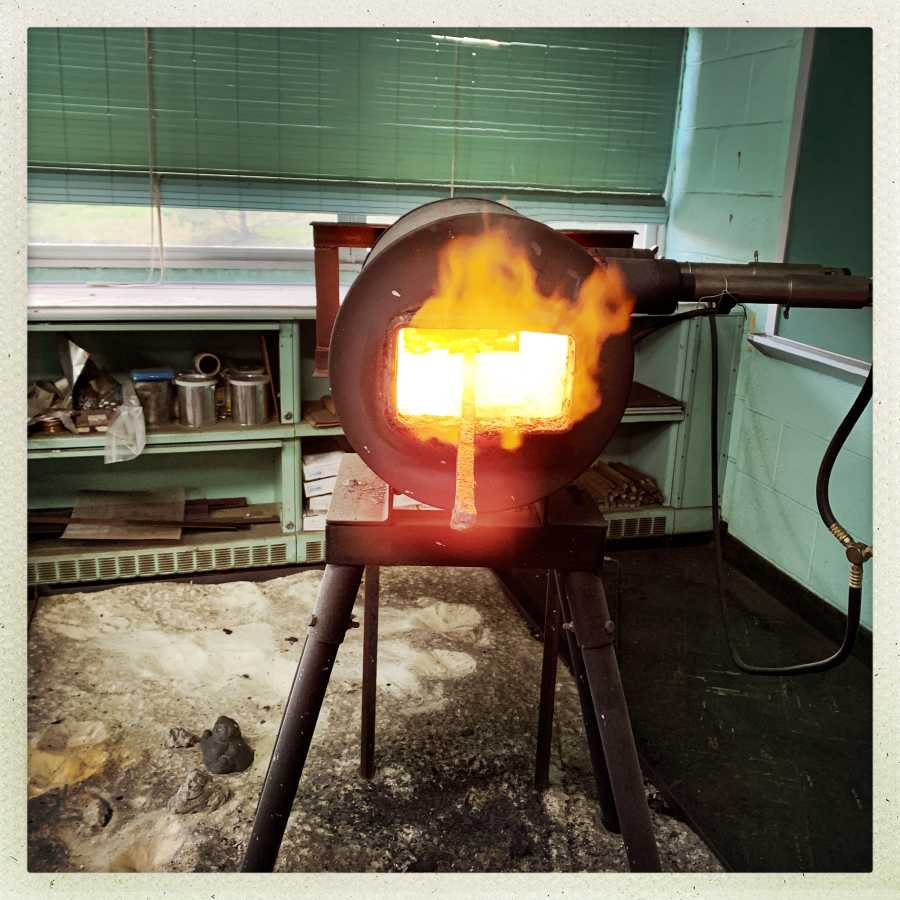 I think I put about 10 turns in it, then flattened it and drew it out into about a 1/2″ bar, maybe a bit over so I can grind it down and clean it up.

Somewhere in that process I started to wonder if I was work-hardening the bar or whether it could even harden – it’s a mix of mild steel and other stuff; it might be impossible to harden. If it’s hard, it’s going to be a problem drilling it and tapping it for the screw that’ll hold the carbide cutter in place. And since I was on a roll I thought I may as well make the bar for the bowl gouge, too. I did a quick cleanup on the bar and the piece of twist damascus that is going to form the cutting edge and didn’t even bother tack welding it – I just positioned it carefully, fluxed it, and whacked it just like a Japanese sword-smith. And, it welded right up. That was really promising.

What I had not noticed was that I’d grabbed the wrong bar. I was supposed to have grabbed a big piece of wrought/1095 damascus that I had earmarked for the bar for the bowl gouge; instead I had grabbed a piece of 1095. When it was welded, I noticed I’d gotten the wrong bar but it was a bit too late for that and I reasoned that a big chunk of 1095 was certainly tough enough for a bowl gouge so – whatever.

I was really on a roll with that lovely weld, and proceeded to fuller the twist damascus piece out into a pretty nice gouge-shaped curve, then trued the bar up and finished truing up the suminigashi bar too. After it had cooled down the gouge looked promising: 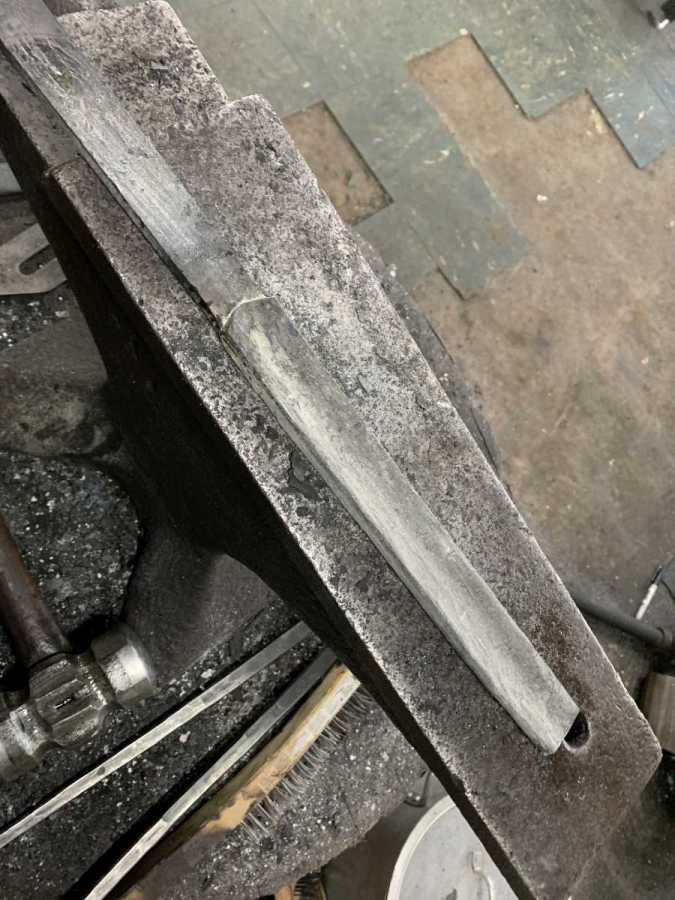 At the upper left is the bar of 1095 that will form the tang of the gouge; the lower part with the curve in it is the twist damascus piece I welded onto the bar; that’s going to form the cutting and shaping edges of the gouge. There’s a lot of metal there, to make it all nice and strong. Well, strongish. 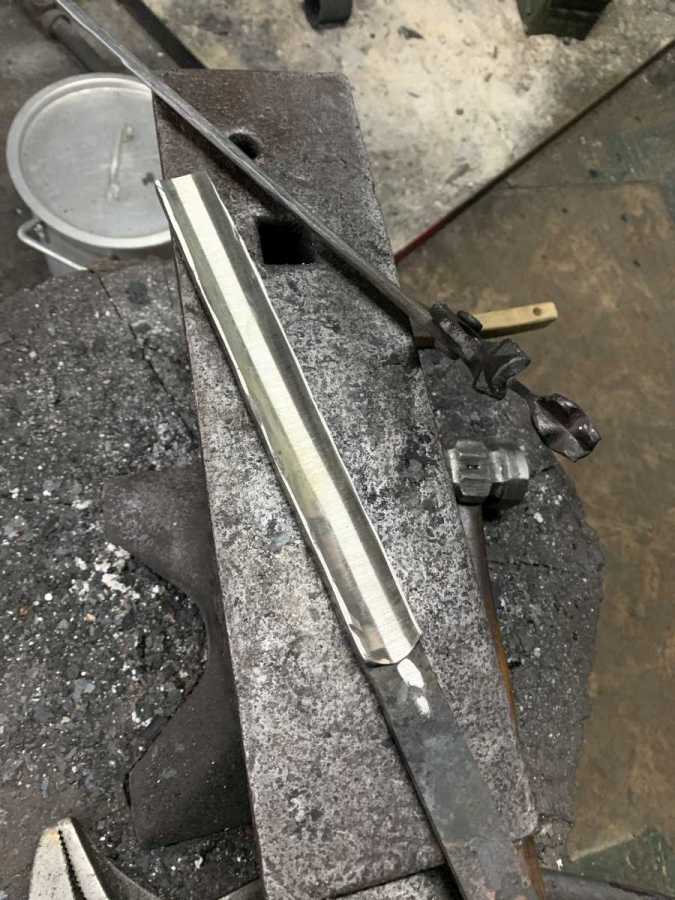 I took it over to the grinder and used an angle grinder held obliquely to machine out the inner curve of the gouge, then finished it with a coarse belt using the idler wheel as the radius. I have to say that it’s looking remarkably good at this stage! Just about then, I knocked it off the anvil and onto the floor and discovered that the 1095 bar had work hardened, apparently – because it just snapped like a candy cane. 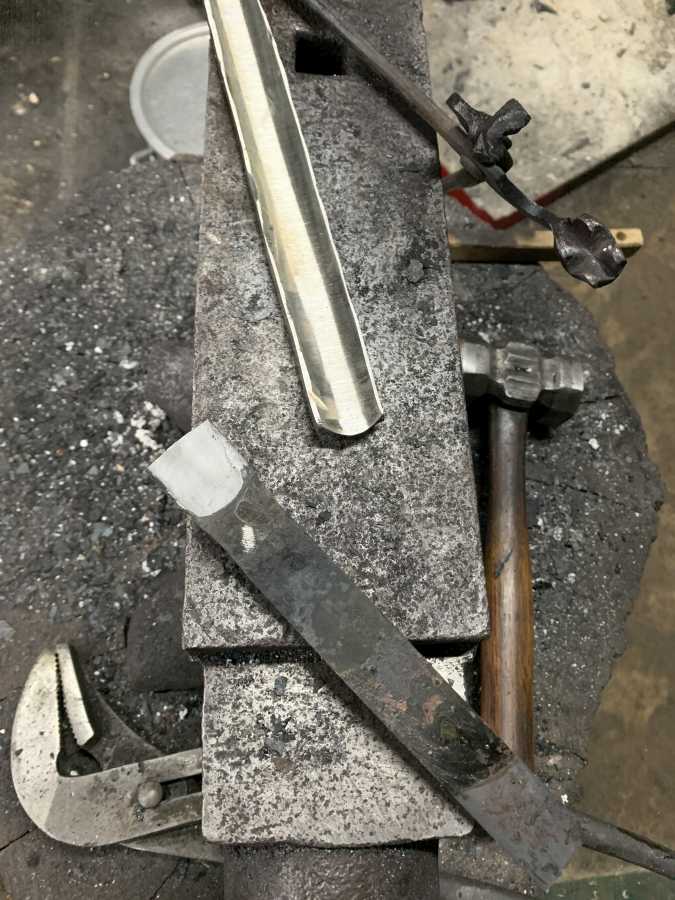 It’s alright. Next time I’ll just make a big bar of twist damascus and shape it into the gouge and tang without having to do it out of two parts.

I probably should not have done this, but since I had the gouge piece shaping up nicely, I wondered how the patterning in the twist layer looked, so I dunked it in the ferric chloride for a while and worked on something else. 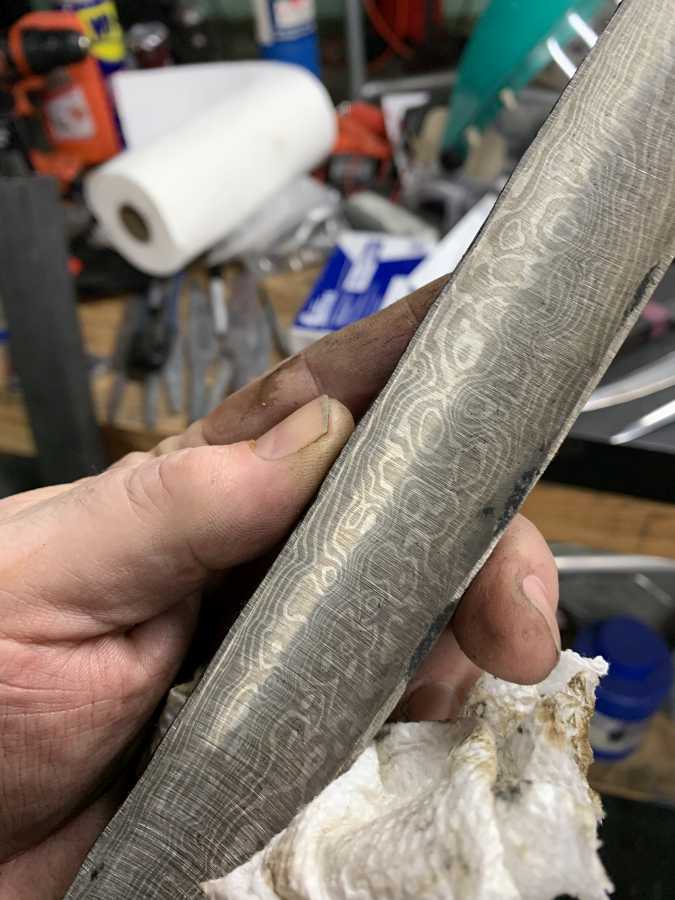 Now that it’s got this unevenly-shaped piece of 1095 welded on the back, and it’s beaten into that gouge-shape, I don’t really think it’s worth trying to salvage into anything. It’d take me a lot of work to cut the 1095 off and if I’m going to do that, it’d be easier to make another bar of the twist damascus and just be done with it.

Some day I will have the coolest bowl gouge in the world. But that day is not today.

A Blacksmith Walks Into a Bar… » « Sunday Sermon: Why Not Atheism?