Lost in all of the noise about Trump’s impeachment, is a bit of fact-nugget about how the US is diligently trying to make the world a worse place.

Judging from the call between Trump and Zelensky, the US is giving/selling the Ukrainians Javelin missiles.

By the way, if you’re not familiar with that process, it’s probably being done in the same way as US “foreign aid” to Israel and other places: the US gives a country money that is intended to be used to buy goods and services from US companies; in this case Raytheon. That way, Raytheon’s balance sheet looks great: they have significant international revenues, they don’t just sell to the US government, etc. 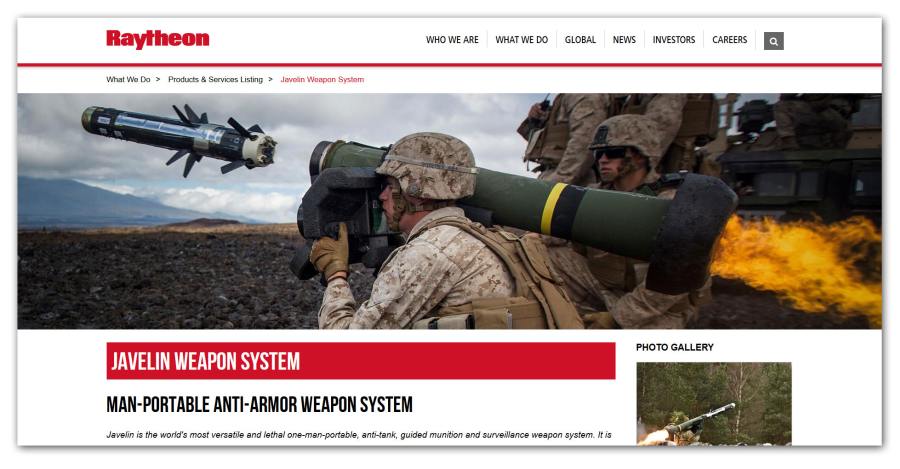 As usual, weapons systems get their own professionally-designed web page [raytheon]

That’s part of what’s confusing: was Trump making Zelensky roll over and beg for the money, or the javelin missiles? The answer is: “both.” He was controlling the money for buying the missiles. Without a doubt the shipping and handling on those is extremely expensive; a lot of friends-of-friends are going to make a chunk of money moving those things around.

The javelin is a state of the art piece of nastiness. It’s an infrared homing anti-tank missile with a 2+ mile range. You put the crosshairs on a target, lock onto the heat signature, fire the missile, and duck away from any return fire that may be coming your way. It’s more reliable and accurate than a wire-guided missile, since it does some of its own “terminal guidance” – i.e.: the target may try to evade and the missile may try to hit it anyway. It’s never a sure thing in war, but the probability of a kill goes way up.

Now, imagine if there was a place in the world where the US military was roaming about in armored vehicles – say, Somalia – and Russia decided to sell (i.e.: “give them the money to buy”) state of the art anti-tank missiles. Missiles that they knew were destined to be used against US troops. Missiles that would kill US troops.

Imagine the freak out.

On top of all of the other incompetence and furor in this great big drama we are having, the Russians have basically been informed officially that the US was planning on increasing the lethality of the low-intensity conflict on their southern border. All of this is being done in the context of a great deal of finger-wagging about Russia interfering in US elections.

Well, this should put to rest any notion that Trump is Putin’s puppet.

No doubt none of this was a surprise to the Russians.