When I went to Pripyat in 2011, it had not yet been opened as a tourist destination. We had to do a bunch of paperwork and pay surcharges (bribes) and fees (official bribes) to get into the exclusion zone as a camera-crew doing a documentary.

Each of us arranged our own kit. One of the fellows, a nature photographer from Atlanta, had a hiker’s backpack that was absolutely jammed with camera gear of all sorts. Another fellow was a Brit from the hiking tradition, who was just there to wander about and take in the sights. I was there because I could be, that was about it. I had an old Vietnam-era alice pack, a couple of volund sweaters and a rainproof shell, layered gloves, camera (of course) GPS, rad meter, hat. All the stuff you’d expect to take.

When I got to Kiev on my inbound flight, I realized I had forgotten a flashlight. So I stopped at a shop in the market and bought a cheap LED flashlight that looked tactical enough for the job.

I’m reminded of all this stuff because last night I finally got into watching some of the Chernobyl series. Since I am on metered bandwidth, I can’t stream stuff, I have to wait for it to come out on DVD then buy it, rip it, and archive it. The show is really well done and I’m sure it’s going to win a zillion emmyscars, deservedly. Because of the cold I’m working on getting over, I have been taking good slugs of nyquil (dextromorpham + acetominophen) which makes me feel a bit detached and light-headed. Chernobyl was probably not the right thing to watch, come to think of it, but it’s what I hit upon. 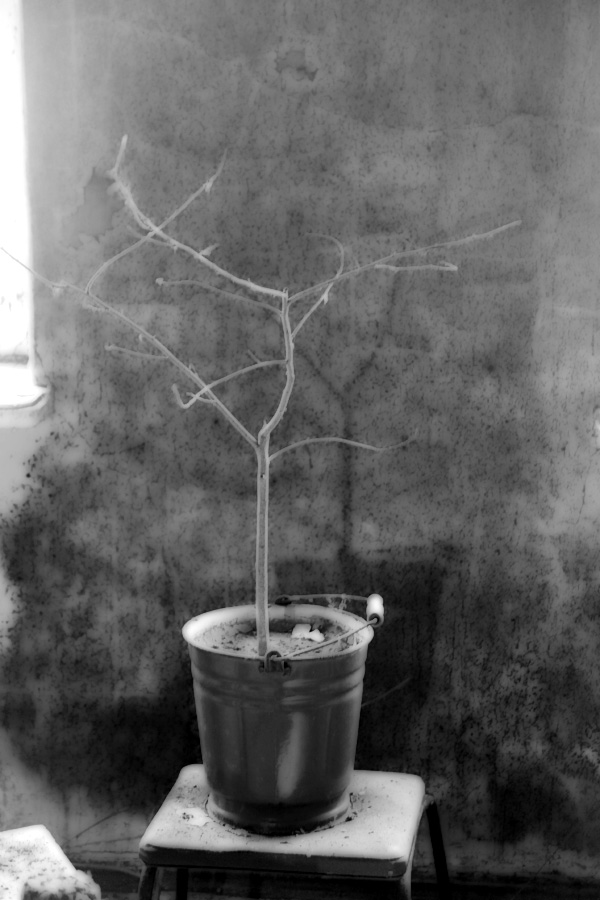 That reminded me of one of the scariest moments of my life. There have been 3, that I count – times when I’ve been overcome with fear so strong that I just freaked out and lost control of myself and did like the characters do in horror movies: get stupid and run around waving arms in the air with eyes bugging out, just trying to get away from the situation long enough for everything to be OK. I’ve had moments of existential dread, like the time I nearly drowned kayaking or the time I flipped my Honda del sol end-over-end and hit an oak tree, but in those situations my body/mind gestalt was occupied – busy with what was happening – so I felt no fear at all; it was like I was moving through glue in “bullet time” as I was trying to do what I could to survive. So far, so good, obviously.

The times I’ve really experienced fear are when my mind and imagination work against me and make the situation I am in vastly worse than it actually is. You know the old Bene Gesserit saying “fear is the mind-killer” – that kind of fear. I’m a creative person who thinks fast and when my creativity starts working against me, to create monsters out of mites, then I can jack myself up in no time at all. Usually, that does not happen, though, when it does, it’s memorable.

This is not a spoiler. This is a flash-back. If you’ve seen the Chernobyl show, there’s one moment in the first episode where the firemen are at the hospital and one of the nurses realizes their gear is dangerously radioactive. They take it off and dump it down in the basement. Whoever scripted that did a really good job cueing us to be afraid, using subtle moments like that to reveal the fear that would have been starting to creep into the edges of the characters’ reality. If you want to think about the Chernobyl show as a horror flick, it’s very well done – like in Ridley Scott’s ALIEN the monster is dimly glimpsed, at a distance, lethal if you look at it because it’s looking into you at the same time.

The third day of our exploring, we split up and wandered about Pripyat (the abandoned city 5 miles from the plant) on our own. There are endless apartment flats but they are not very interesting, mostly there are the usual landmarks: the ferris wheel, the concert hall, the department store, the hospital. Since there are no lines of tourists, or even doors, you can just flow through the buildings with your camera, grabbing whatever scenery seems interesting. So, I went through the hospital. The ground floor was trashed but the second floor was not as bad. The show gets the light in the hospital, and the furnishings, and the layout, and the general look and feel, absolutely perfect. It’s oppressive and eerie and sad. 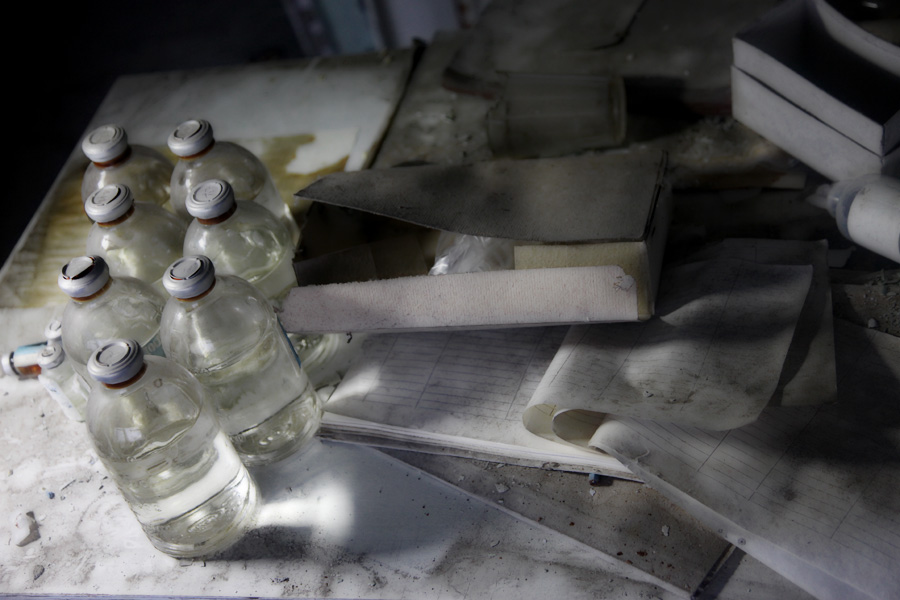 On the ground floor, there was a stairway down to the basement that had been deliberately blocked with concrete blocks and cement. But when I looked down the elevator shaft (as one does) I noticed it was possible to climb down, through the trapdoor in the top of the elevator car, and the doors appeared to be jammed open. As I was feeling adventurous, I dropped the alice pack and left my camera on it, grabbed my flashlight and put my leather gloves on, and clambered down. I left the camera because it was new and I didn’t want to bang it around, and besides it was pitch dark and I had made the decision not to bring a tripod on the trip. My climbing style is hardly nimble anymore but I made it down, with my flashlight clipped to my jacket, and went out into the hall.

It was dark and funky in the basement and my little flashlight was revealed to be pathetic. I could make little spots of light but if I adjusted the beam spreader on the front all it managed was a dim puddle of off-color illumination. Just about then, I heard a loud chirp. It was my radmeter; a really nice digital model I borrowed from Rick A., a notable nerd who had such things lying around. I took it out, shone the flashlight on it, and saw that it had a warning mode. I did not know that! Apparently it thought there was enough radiation in the area that I should know about it. Later that afternoon we briefly visited a piece of earth-moving machinery that was notably “hot” [nzherald] and I got more familiar with the radmeter’s various warning beeps. Anyhow, being in the dark, with just a pathetic little flashlight, the chirp of the radmeter really emphasized how alone I was. I kept going down the hall and the meter started to beep faster. There was an intersection in the hallway and, by now, I was feeling like I was playing Dungeons and Dragons for real. The game-master said, “you come to a T in the hallway, left or right?” I went the direction that made the radmeter chirp more, naturally. 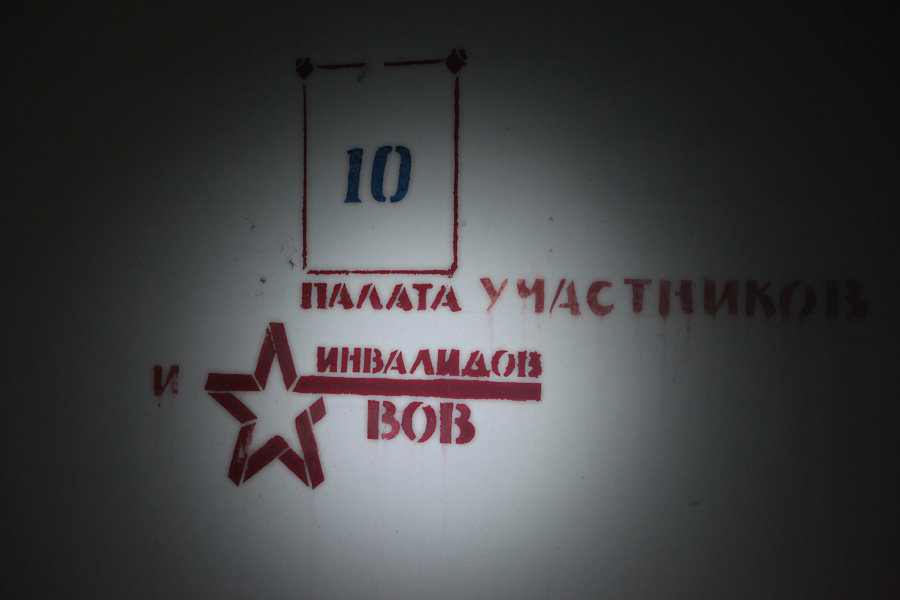 I don’t know what this says or where I shot it. Lit by my pathetic flashlight, Pripyat, 2011, mjr.

The farther I went down the hall, the more excited the radmeter got. If you’ve seen the movie ALIENS, when they have the motion detector detecting inbound xenomorphs, beeping louder and faster – that’s exactly what it felt like. I’m walking down this stuff-cluttered dank hallway, and the nearest other human could never hear me scream if I called for help. Around then I started thinking “what the fuck and I doing this for?” and “curiousity is contra-indicated for feline wellness” and stuff like that. I decided I’d go to the end of the hall and then I’d declare honor satisfied and retreat. I was thinking all of this as I was slowly moving forward, of course, so just about then I passed an open door to a room on my right. The radmeter went batshit. I rotated my torso like a gunfighter being attacked and the flashlight tracked with my body, illuminating a small band through the room. In the middle of the room, on the floor, was a large pile of boots, clothing, helmets, gloves… The radmeter was going batshit and that was when my subconscious decided it was time to go.

I’m not really sure how I got out of there, to tell the truth. I believe that I must have relied on positional memory to do a broken-field run in and out of all of the junk blocking the hallway until I got to the elevator and did one great big chin-up. Or, perhaps I climbed it like Bruce Lee did in Enter the Dragon (if you know what I’m talking about, you know what I’m talking about). Either way, the next clear memory that I have is grabbing my camera and the alice pack and walking out into the relatively clean, fresh, air.

Up until that moment, I had never been so scared in my life, but in retrospect it always seems silly.

I do not know if the production team for the Chernobyl show know about the pile of first responder gear in the basement, or not. But they put a specific reference into the show, about it, which is some high attention to detail.

My main take-away from my experience at Chernobyl was anger at the system of nationalism that had to have its stupid “cold war” and which led both sides to do dangerous things and play dangerous games with their people, in order to jockey for power and prestige. The people of Pripyat were perfectly ordinary human beings, a mix of this and that, let down by a system that didn’t care a rat’s ass what price they paid. From what I’d learned since then, the accident at the reactor was a control error that was not much worse than the non-error responses made by the nuclear plant operators at Three Mile Island. The engineers at Chernobyl were dealing with a mind-set that “RBMK reactors are very safe” when it turned out they were not. I suspect the engineers at Three Mile Island had similar feelings. It could be New Jersey and New York City that would be the wastelands; it’s just bad luck. The Chernobyl series is brilliant in how it (mostly accurately) evokes the lack of an effective government response – it tells us what a lie government is telling when it says “we’re here to help.” Mostly, it’s there to quiet things down. I know that none of you reading this are naive enough to imagine that the US government would respond as effectively as the Soviets did, should we have such an accident. The scene in which the party boss calls upon the workers to volunteer to go down into the bubble chamber, is some of the best drama I’ve seen in my life, and what happens when they do go down there gave me chills and made me write this posting.