Someone sent me this, so I’m just going to repost it because I really can’t top it.

The first thing you need to know about capitalists is that the only people who talk about “maximizing value for the shareholders” are the ones who are defending corporate greed. It’s the universal lubricant of capitalism: it excuses anything, if you believe it at all. 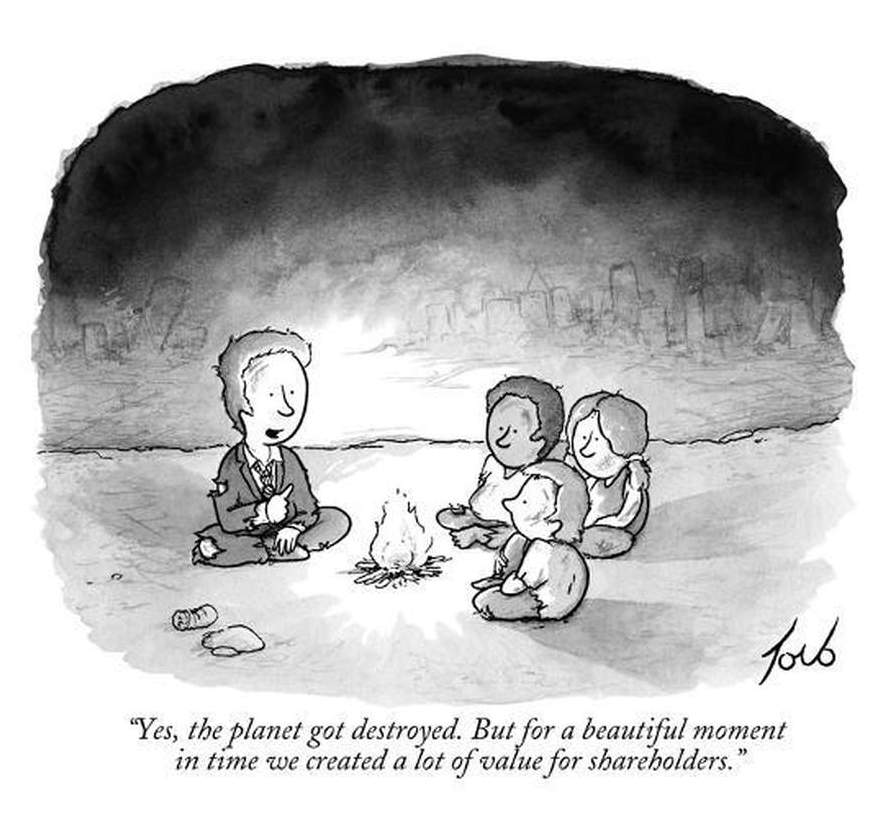 Another thing the cartoon captures well is that shareholder value may fluctuate. What maximizes their value today may kill them tomorrow, in other words. Oh, that global warming stuff? Sure, it’s just a byproduct of maximizing your shares’ value by exporting dirty industrial processes to places where there was no regulation.

One of the huge lies of capitalism is that it actually optimizes things other than shareholder value. Free markets actually are incredibly inefficient for everyone except the rich buyer who wants to play sellers off against eachother. In the case of labor markets, that means those dirty industrial jobs wind up in Chile or China or Malaysia, where there is no Environmental Protection Agency (or it’s corrupted by insiders) and they can offer lower prices by cutting more corners, or screwing labor harder. The result is that jobs shift not only to where they can be done cheapest but often to where they are most exploitive. I.e.: capitalism’s markets trigger a race to the bottom.

This is one of the reasons I am not optimistic about humanity’s future. To deal with a problem like global warming, it’s not simply enough to get rid of nationalism, the capitalist system needs to be replaced with a global economy that makes cheating on safety, screwing labor, or emitting pollutants non-profitable. Getting rid of nationalism seems like an impossible task but thanks to the US, capitalists are pulling the strings behind the nationalists – and they are greedier, more vicious, and utterly amoral.