It sickens me to see congress, whose specialty is offering “thoughts and prayers” while taking NRA money, jumping all over Trump’s bloated ass for refusing to contextualize the shootings in Texas and Ohio as “white supremacist terrorism.”

But Trump and congress should not be the sole targets of our derision. Check out the failing fake news of record’s headlines today: 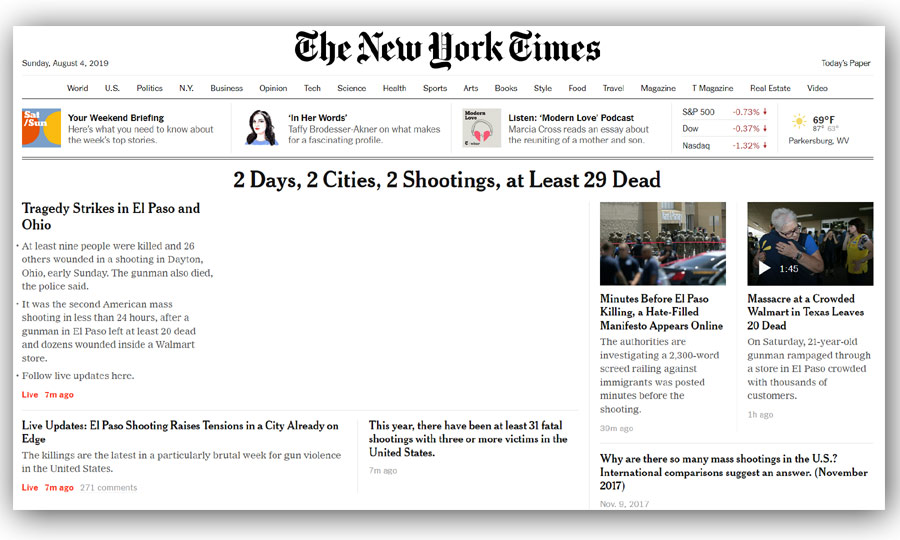 “Tragedy Strikes in El Paso and Ohio” – not, it was white supremacist terrorism you fucking cowardly excuse for an establishment mouthpiece!

The media have become meaningless score-keepers of empty, useless, scores:

[also on the front page of NYT]

Of course the NYT is hardly the worst of it. I did not watch the impressive democratic party debates because I was afraid it was going to break out into an episode of Dancing With The Stars instead of Game of Thrones. Did anyone ask any of the candidates about gun violence? Did anyone ask any of the candidates if they take money from the NRA? I bet that question would have been off the table, by agreement with Biden’s handlers, because during the great length of Biden’s political career he’s had a chance to take money from everyone including Napoleon Bonaparte, the CIA, and Marcus Licinius Crassus.*

There have been 22 school shootings in the US, so far this year. When the Scottish had one they acted decisively. Several things should jump out at you from this chart: [Firearms offenses in the UK, 1990 to 2009] 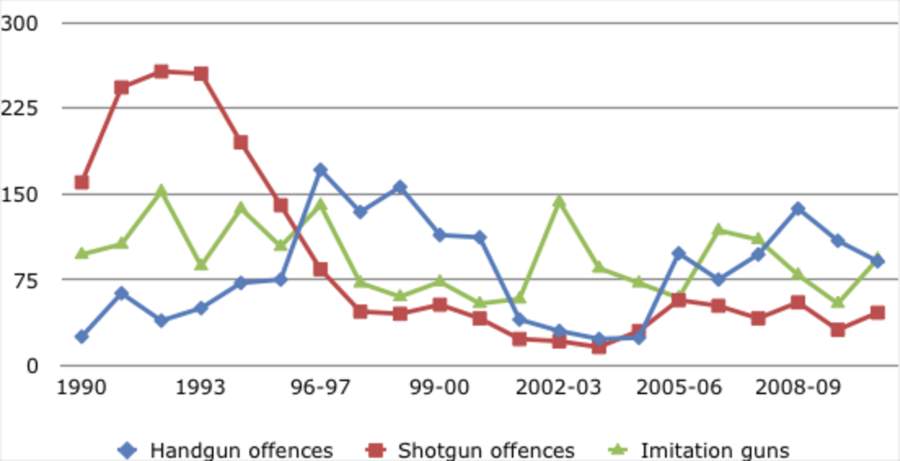 You might notice that they had to add “imitation guns” to the chart in order to make things look worse than they are. I don’t know about you, but I don’t mind being shot with an airsoft, if the alternative is a .223. Maybe in the UK, it’s a big deal when someone points an airsoft at you, but out here in Pennsylvania that’s just a creative way for them to get killed. Unless they’re white, that is.

What you should have noticed is that the UK started with an already low number: around 250 at the worst, which is probably comparable to any given weekend in the USA. And, after they passed more “draconian” controls on guns, the death rate appears to have dropped to less than 1/3 of its already low rate. In other words, “holy shit, gun control seems to work!”

Right now, however, the US congress is busy trying to portray Antifa as a bunch of terrorists, and is turning the eye of the state, and its heinously expensive retro-scope toward discovering what Antifa is up to. Meanwhile, white supremacist terrorists are completely off their radar screen. The FBI is not backtracking firearms and ammunition purchases from white supremacists to see if they are maybe doing anything suspicious – but they sure as hell did that when the Black Panthers were rising to prominence.

Here’s a factoid about gun ownership that the FBI ought to be processing more carefully: 3% of Americans own 90% of the guns and they are mostly working/lower-class white people. Who are they preparing themselves to defend themselves from? Since the Indigenous Peoples have been mostly ethnically cleansed (by white American gun-owners) that leaves only two likely targets: black people, or cops. The cops ought to be worried but they’re not because they know what’s going on. Hell, they are part of it.

Back in 2016, this same month, I posted a piece called “From My Cold Dead Hands” [stderr] which offered a very simple, easily enforced, low-impact solution to America’s gun disease. It is not only practical, it’s possible – don’t bother me with nonsense about “the constitution” when the government is ignoring that piece of worthless paper every day. Anyone who wants to complain about the 2nd Amendment needs to stand up, first, and explain why they didn’t fight and die for the 4th or to stop the 16th or to defend the 26th.

To return to the main point, however: please stop complaining that Trump can’t call “terrorism” terrorism when it’s done by white people, especially if you’re a member of the press and you’re also whitewashing these horrible events. The New York Times has been dutifully mouth-breathing pruriently over Jeff Epstein (who appears to be a common-or-garden rich asshole creep pedophile) instead of talking about the obvious fact that we have a national white supremacy problem, aided and abetted at the highest level, including by the media. The fact that the media is not drawing a dotted line between creepy common-or-garden rich white supremacist Steven Miller and the actions of ICE, is a symptom of how complacent they have become. Start holding politicians’ feet to the fire, or get out of the way and collapse into being the “New York Edition of People Magazine” already.

* For a while I was afraid I was named after Crassus. My dad, the historian, named me after Aurelius, whose meditations he was reading at the time. Dad was, and remains, a stoic. When I discovered Nietzsche you can imagine the discussions we had. Anyhow, “Marcus” – “belonging to Mars” the god of war, was an odd name for a pacifist’s kid, and in my youth I tried to grow to fit those shoes.

Give It Back! » « Defeat With Dignity