Many of those people were there to protest the taking down of the statue of Robert E. Lee. So this week it’s Robert E. Lee. I noticed that Stonewall Jackson is coming down. I wonder, is it George Washington next week? And is it Thomas Jefferson the week after?

I thought that I have moved past my capacity to be shocked, but I was listening to a recent episode of Uncivil (Chenjarai Koumanyika’s podcast) and some of the things they recounted completely blew me away. If you think you’d rather listen to it, which I recommend, the link is: [here] [transcript] From here on, I’ll trade freely in spoilers. 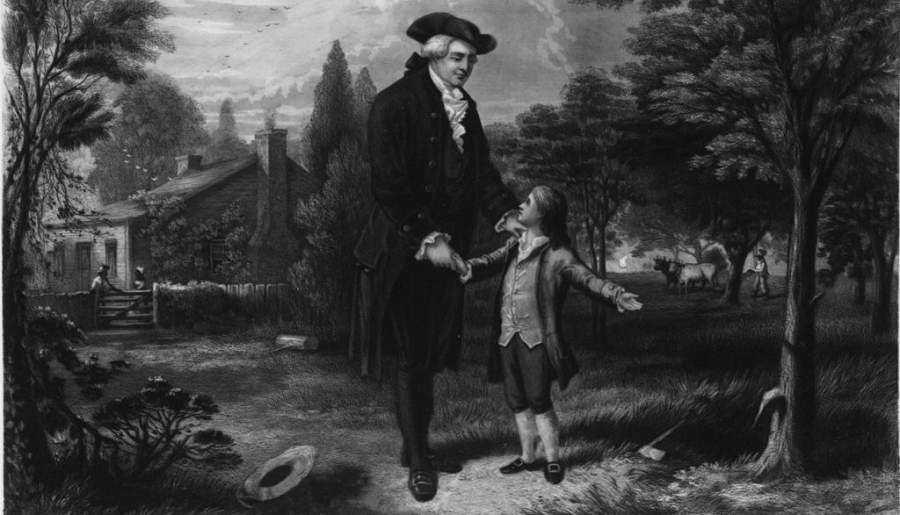 “I cannot tell a lie, a Frenchman talked me into chopping down that cherry tree.”

Here’s a summary: Washington was a cheating, lying, slaving, piece of shit. He deserves no statues, no coins, and ought to be lumped in history alongside other great losers like Robert E. Lee and Hitler. Yes, I went there. Hitler tried to wipe out an entire tribe of humans because of his racism; Washington was instrumental in dooming generations numbering millions, to a living labor-camp that their descendants still struggle to escape from, today. I thought he was just another oligarchic hypocrite like Jefferson, but he was the front-man for the whole enterprise.

Elsewhere, I’ve mentioned how the colonists’ cries that their “freedoms” were under attack did not ring true with me: “what freedoms?” Their “freedom” to own people; that was the one place (other than taxes) where the colonies felt that changes to English common law were impacting their behavior. [stderr] Somerset V Stuart removed the legal basis for slave-ownership, leaving the colonists with a few years of confusion before they revolted in order to preserve their oligarchs’ wealth and the tobacco and cotton industries. That’s the macro picture. The micro-picture is almost more devastating, and that’s what Uncivil gets into. It’s an interview with author Erica Dunbar, who researched and wrote the history of a young enslaved woman who ran away, and what happened to her. [wc] Never Caught is the story of Ona Judge, who was one of many runaway slaves; the people who thought they owned her were George and Martha Washington. 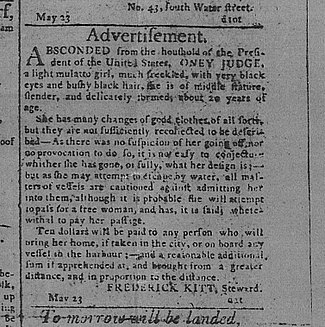 When the US was founded, abolition was a hot part of the political agenda. Some parts of the country, such as Philadelphia – the capital – had laws prohibiting slavery. If someone moved the Philadelphia, their slaves were free after 90 days. For Washington, this would have meant freeing his slaves once he took over as president and took up residence there. But, in a feat of remarkable sleaziness, Washington hit upon the dodge of rotating his slaves between Mt Vernon, in Virginia, and his residence in Philadelphia – every 75 days. He was aware that the “optics are bad” with that maneuver so he was careful to keep that secret. When Ona Judge ran away, Washington didn’t want word of his dodge to leak out, so he floated the lie that Ona had been seduced away by a frenchman.

Then, Washington gets creepy. He takes out an ad in the newspaper offering a substantial reward. A chance encounter with a member of Washington’s family gives up the fact that Ona is hiding in Portsmouth, so Washington drops a request to the secretary of the treasury, asking him to find someone who can capture and return his property. That’s so far ahead of “pulling strings” that it’s off the chart – the President of the United States is using the government itself to help him catch one runaway. Ona manages to fool the slave-catcher who is sent after her (who gets confused by the story about the nonexistent frenchman) and takes it on the lam, again. Washington attempts to negotiate with her, not offering her her freedom but promising not to be particularly cruel to the members of her family that are still under his control. In terms of creepiness, Washington trumps Trump. Remember, this is the president of the united states, threatening a 20-something woman who had nobody in the world defending her. The guy who is threatening her is the commander of the armed forces and he’s called upon the secretary of the treasury in an official capacity to help get his 20-something victim run to ground. He was also one of the wealthiest land-holders in the country; Ona was a rounding-error on his books – he was simply a mean, vindictive bastard, typifying the absolute worst of the slave-owner culture he was a part of.

The end of Ona’s story is a mix of complications. She remains free and is never caught; she finds a man she’s happy with, and has children, but the man dies young. Then, George Washington does everyone a favor and dies. Unfortunately, Washington was a hypocritical asshole even beyond the grave: he had apparently planned to free his slaves upon his death, but instead he willed them over to Martha, that they only be freed on her death. If this was a Coen Brothers movie, that would be the end of Martha, too, but 120+ slaves (including Ona) were trapped in the Washington’s hell, inter-generationally. Ona’s children, who were born free, still had a claim on them from the Washington estate because of her attempt to escape. When Washington’s granddaughter married Robert E. Lee (yes, that Robert E. Lee) the claim on Ona’s children passed to their family.

Let me answer Trump’s rhetorical question: yes, tear down the statues of Washington, too. He created the American south. He laid the fuse for the civil war, and helped light it; he was greedy, heartless, and vindictive. Oh, and he could tell a lie: there never was a “frenchman” – Ona ran away because she was tired of having someone think they owned her. If there’s anyone in this story who deserves a statue, it’s the 20-something woman who flouted the most powerful man in the country because she had right on her side.

You may have noticed that I have decided to use words like “shit”, “fuck”, and “asshole” more often. There’s a reason for that: I want to avoid ableist slurs, and those are pretty good slurs (though they are a bit abstract). I’m not going to whine about how our dialectics have been dragged into the gutter; they always were in the gutter, all that stuff about “bad words” is just pretense. I look at George Washington and Donald Trump and all I can think is that “it’s time to call an asshole ‘asshole'”

How a Lie Keeps Knocking On » « Creepy Macho-Talking Ignorant Coward