In [stderr] I wrote:

There is another aspect to this whole mess that interests me: who the fuck is Michael Avenatti? I mean, other than a media manipulator who appears to be completely unconcerned with much beyond self-promotion? I have been disturbed to see the media paying him so much attention, as if he’s some kind of cure for Trump, when actually he appears to be a younger, smarter, more energetic version of Trump. Why does anyone look at Avenatti and think “that guy is on my side”? He seems to me to be the kind of guy who’ll throw you under the bus but only if the cameras are running and he can tell a good self-serving story about it. It’s still unclear where the money for him to go after Trump came from – does anyone want to bet that it wasn’t from some Trumpstyle shell companies set up by a more competent political operative than Michael Cohen? At one point in his career, he worked as an ‘opposition researcher’ for Rahm Emmanuel’s Chicago machine. The stink of swamp is all over the guy. 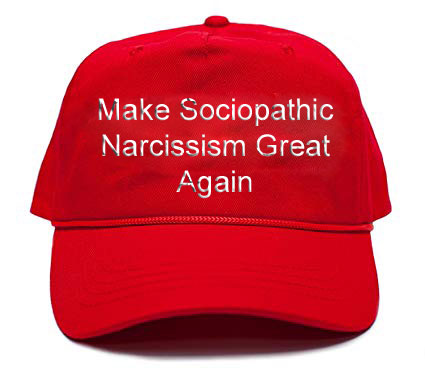 A few months ago, responsible media outlets were talking seriously about how Avenatti might run for president. Now, they are talking about how he may wind up in prison for the rest of his life, for pissing off Nike. [politico] Don’t these people listen to their Jim Croce anymore?

Other than all the lives that are being ruined, one of the sub-tragedies of the Trump ascension is that it has ushered in an era of egotistical, dangerous narcissists. That the media were considering Avenatti to be anything more than “that asshole lawyer” tells a lot about how far the overton window has shifted.

Attorney Michael Avenatti said Wednesday he’s “nervous” and “scared” about the prospect of going to prison for the rest of his life, but is “confident” he will be exonerated on charges he tried to extort Nike for tens of millions of dollars and other financial crimes.

In an interview that aired Wednesday on “CBS This Morning,” the celebrity attorney who rose to prominence as an antagonist of President Donald Trump maintained his innocence, asserting that his name will eventually be cleared because “the facts are on my side.”

Clare Bronfman, an heiress to the Seagram liquor fortune, fainted Wednesday in federal court in New York City after a judge asked if she was being secretly represented by embattled celebrity lawyer Michael Avenatti in a case where she is charged with money laundering and identity theft involving the alleged sex-cult NXIVM.

After Bronfman’s fainting spell, it was revealed in open court that Avenatti had, in fact, last week met with federal prosecutors in Brooklyn about her case, according to a knowledgeable source.

Don’t mess with Jeff Bezos, either.

Does This Work On You? » « About the Mueller Thing