This is an idea I stole from michaelcthulu on youtube. He’s the guy who makes gigantic swords from anime shows [youtube] and he’s quite a character.

Part of his “schtick” is jury-rigging tools and techniques but he’s an artist with a welding torch and an angle grinder. At various times in his show he does some crazy stuff – one time he was working on a particularly hot day, so he rigged up a box fan carrier on his back. There’s a lot of subtle method to his jury-rigs: the fan was also keeping away chemical byproduct gases. Another time, he was making a huge bevel on a blade, using only an angle-grinder, so he built this sort of backpack head-crane thing with a counter-weight that made his angle-grinder drag down less on his hands.

That seemed like a good idea, especially since I have infrastructure and walls I can work with. 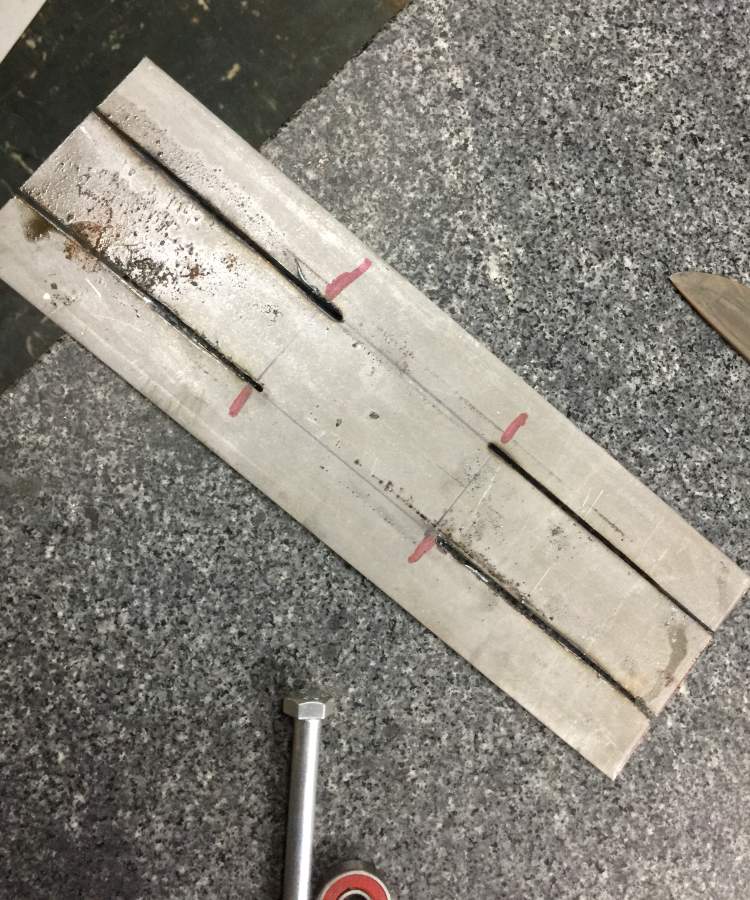 I have also gotten more skilled with angle grinders. Clearly, I didn’t hit my marks perfectly, but the lines are more or less straight and the piece is plenty strong. Two quick lines of heat from the oxyacetylene torch, and bend along the dotted line with pliers. Then I drilled mounting holes and a support hole.

The ball bearing at the bottom is a skateboard bearing; they’re nice for this purpose since the inner edge is slightly higher than the outer; if you put a washer on it to catch the load, it’ll serve as a nice inexpensive pivot. 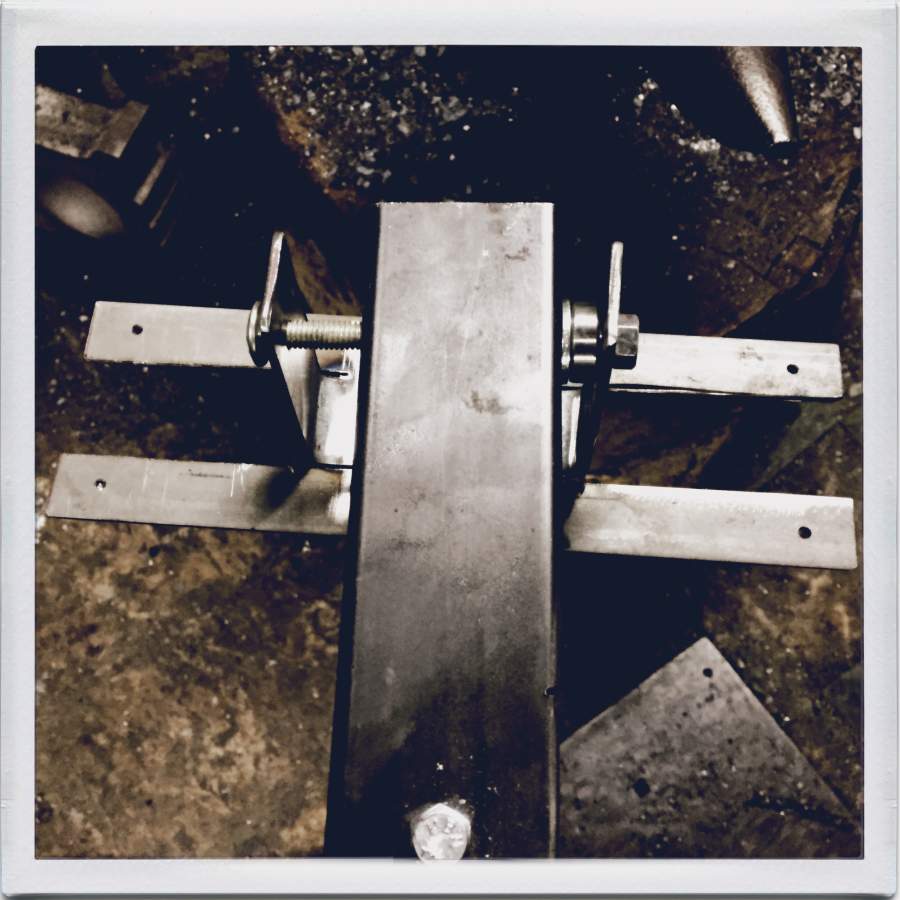 I could have made the fit tighter but I wanted to be able to fit my fingers in to position things. Besides, who cares?

If you look at the bottom of the picture above, there’s a bolt through the beam and there’s a cut out rectangular hole. Inside the beam is a ball-bearing pulley that comes almost up to the top of the beam. There’s another one at the other end of the beam. Then, I laced a cable through it and hammered down ferrules at the ends. 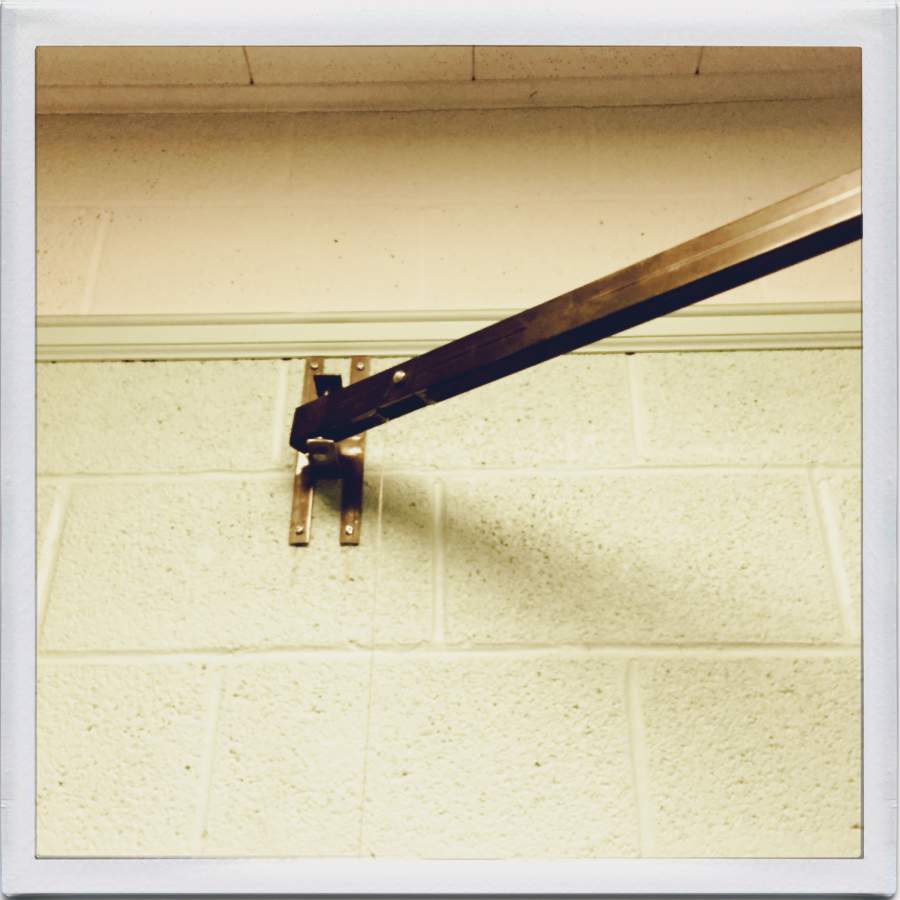 One of my old photography studio counter-weights (a bag of lead shot) clips on the end of the cable so that it falls down and sits on the bench when it’s not in use. There’s about 6 feet of “pull” length, which is plenty. 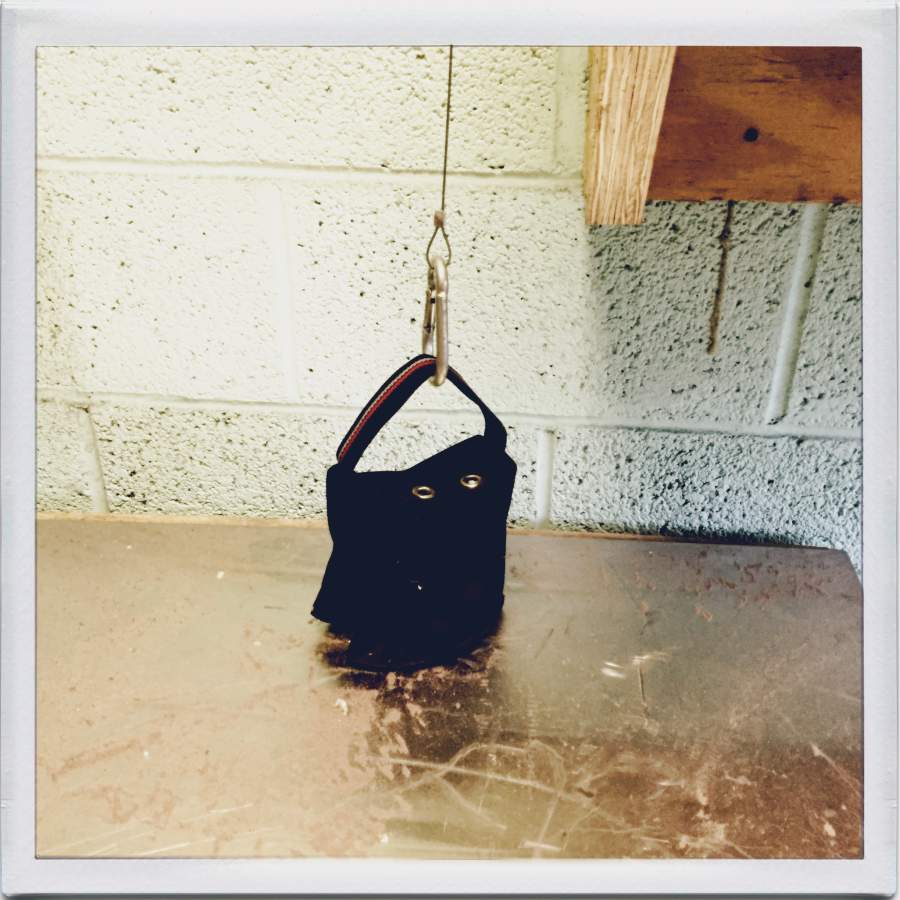 Because I know myself, I put a ring in the cable loops so that it couldn’t somehow fit through the pulley. 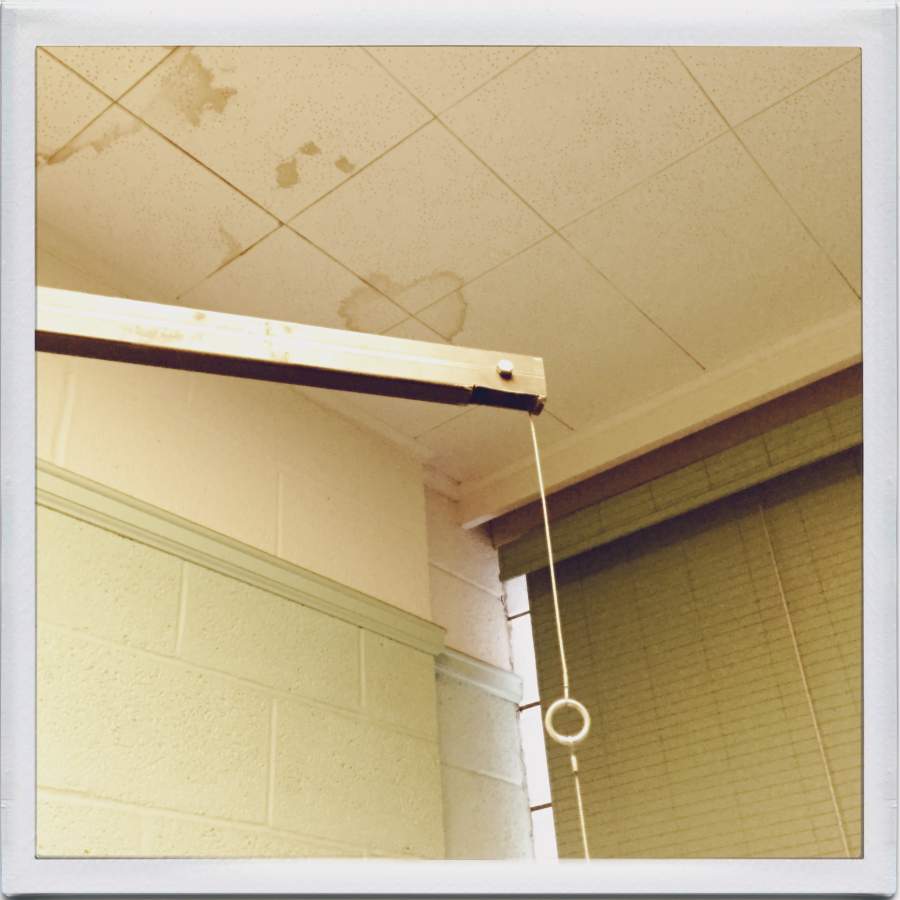 The other end clips around the side-handle of an angle-grinder. 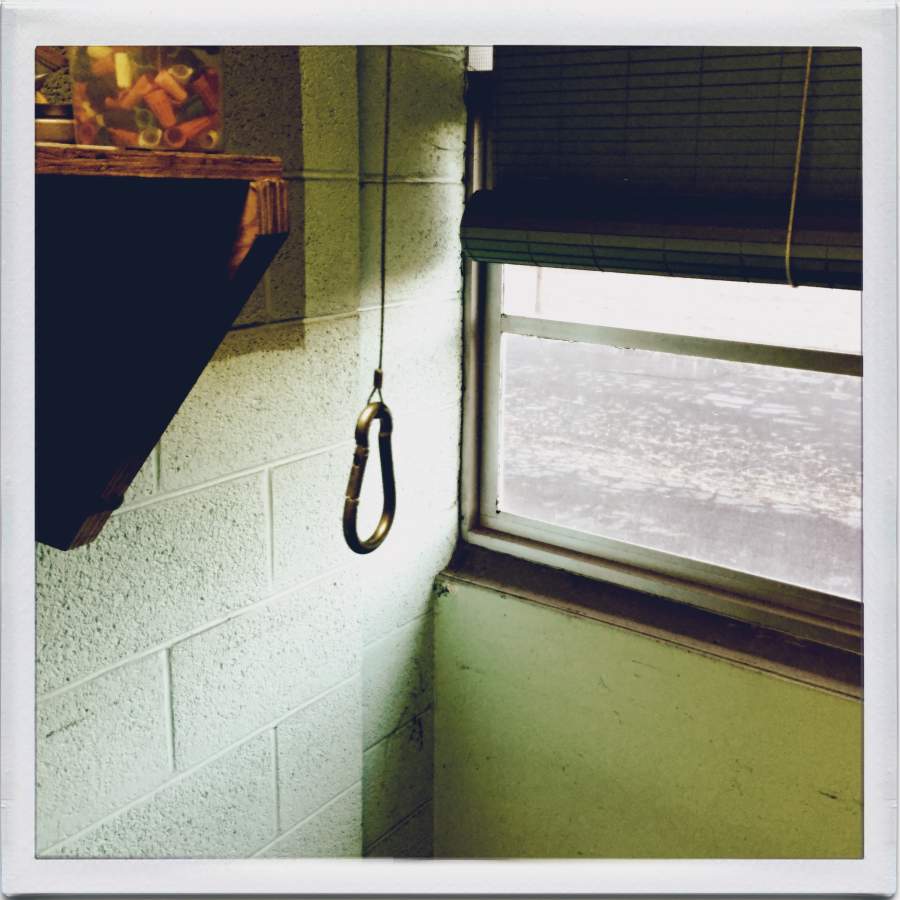 After a bit of tuning, I have it set so that the grinder’s weight is nearly perfectly offset. It’s still safe because the cable goes straight up and out of the way (thanks to the beam) and I can take advantage of the bendiness of the cable to move the grinder wherever I want it (and the beam also pivots)

This has proven to be a valuable and efficient system. My shoulders thank me! I mostly use a 1/4″ thick grinding wheel, so I leave that grinder mounted on the shelf with the counter-weight clipped to it. Taking it down from the shelf, it glides effortlessly through the air, with just enough lift on it that it’s slightly lightening my arms. Using it feels like dancing a waltz, except shooting sheets of sparks across the room (which would make waltzes interesting!)

Part of why the beam is where it is, and the length it is, is because I plan to build another similar beam for my respirator system, on the other side of the room. So I needed to fudge the lengths so they couldn’t get tangled up.

A fully loaded angle grinder weighs about 12lb and you’ve got to grip it firmly to make sure it doesn’t grind an angle in your leg, or something. Not having tired arms is a good thing!

Ceiling Mod » « I Wonder if This Was Written by an AI?