One of the US’ self-appointed roles is the Guardian Of The Open Seas – which means keeping the shipping lanes open for global capitalism (i.e.: oil) and making sure that its nuclear powered and -armed aircraft carriers can practice gunboat diplomacy anywhere, any time.

The US’ stated policy is that its navy will go wherever it wants to, and you’re asking for a thermonuclear war if you try to stop it. An aircraft carrier task force group is, simultaneously, a tremendous threat and a great big fat floating target. Everyone in the US Navy convinces themselves that “nothing can sink a carrier” and they orient their simulation wargames with that given as one of their underlying rules, but the reality is more like “nobody in their right mind would sink a US carrier.”

You know how the Chinese navy sails its nuclear-armed strike ships right into the Gulf of Mexico, off New Orleans and the US’ ballistic missile sub bases in Alabama? What, you say they don’t do that? Because a) it’s way out of their way and b) there’d be hell to pay if they did. But the US insists on semi-stealthily maintaining its imperial gravitas by claiming that Chinese-built island outposts are not “land mass” and do not affect coastal navigation rights. Only natural islands, like Guam are OK. Guam used to have a massive US base on it, until the US reluctantly admitted that living under Chinese fire-control radar, one twitch from being wiped out, was kind of irksome.

It’s not a case of “none of this changes anything”; what we’re seeing is the US’ resistance to the changing reality of China being a growing economy with better technology, and improved military capabilities that go along with it. The US wants things to remain the same, the Chinese want the US Navy to stop parading their inviolable sitting ducks around, just daring anyone to take a poke at them. It’s a situation that’s ripe for macho dick-measuring, and that’s one of the important roles that imperial navies have always filled. It may be their only actual role, come to think of it.

People who watch this stuff are usually kind of nervous about naval bluster. [stderr] Navies combine tremendous sunk cost (get it?) with a great deal of autonomy. The commander of a major vessel can start a global war, on their own, without anyone being able to stop them. That may sound like an exaggerated claim, but it’s not. For example, the Maine’s famous sinking was the official cause of the Spanish-American war. During the Cuban Missile Crisis, US Navy antisubmarine ships took it upon themselves to drop depth-charges on a nuclear-armed Soviet submarine at the peak of the crisis. Fortunately, the Soviets had a top-heavy command structure that made it hard for the sub commander to deploy the “special weapon” or World War III might have started that day. And, we are talking World War III if some of these dick-measuring contests go horribly wrong. Anyone who reads the litany of “US ship collides with ${stuff}” incidents, and who remembers the “North Vietnamese firing on the Maddox incident” knows that we’re always just one prime fuckup from a full-on war with ${anyone}. If a US ship on one of the “freedom of navigation” exercises in the South China Sea hits a Chinese ship (or vice-versa, it won’t matter) we’re left with nothing but the hope cooler heads will prevail. Because the commander of a US Navy task force can take it upon themselves to start World War III if they’re having a bad hair day. Professional dick-measurers with nuclear weapons, what could possibly go wrong?

Well, the Chinese dick-wavers could get involved, too!

In response to US ${provocation | freedom of navigation} exercises, China has re-positioned some of their potentially anti-ship ballistic missiles so that they have the entire area in their fire-arc. 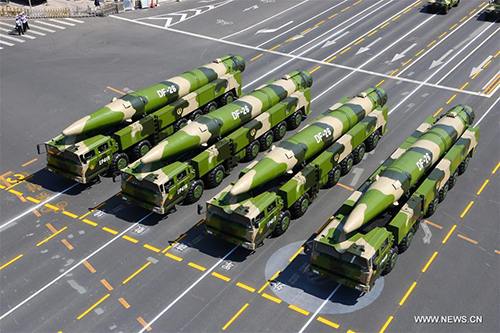 The DF-26 ought to cause everyone in the US Navy’s bowels to flutter a little bit. It’s far from certain that it can hit a ship reliably, but it has huge range, it’s a mobile launcher, so it’s primarily a counter-strike weapon, it’s nuclear-capable, and its warhead re-enters from straight above at very high speeds and none of the navy’s anti-missile defenses have a hope of intercepting one of them. They’re also cheap and China’s hard to sink, being a land-mass.

If the Chinese dick-measurers were US dick-measurers, they’d do some splashy “tests” like hauling an old ship out and “retiring” it with a missile-strike. Just so everyone could see it works. [chinamil]

China’s far-reaching, anti-ship ballistic missile the DF-26 has been mobilized to Northwest China’s plateau and desert areas, reported China’s national broadcaster on Tuesday after a US warship trespassed into China’s territorial waters off the Xisha Islands in the South China Sea on Monday.

The DF-26 is China’s new generation of intermediate-range ballistic missile capable of targeting medium and large ships at sea. It can carry both conventional and nuclear warheads.

This isn’t just academic fun and games; the gold braid-dipped dingbats on both sides of the situation are playing with fire.

The timing of the report sparked discussions among Chinese military observers online, as it came after the USS McCambell, a US guided missile destroyer, trespassed into China’s territorial waters off the Xisha Islands on Monday without permission from the Chinese government.

China dispatched aircraft and warships to warn the US vessel and has lodged a solemn representation with the US, Foreign Ministry Spokesperson Lu Kang said at a daily briefing on Monday.

The report is a good reminder that China is capable of safeguarding its territory, the anonymous expert said. “Even when launched from deeper inland areas of China, the DF-26 has a range far-reaching enough to cover the South China Sea.”

It can hit targets 4,500 kilometers away, china.com reported, making it capable of striking targets including US naval bases in Guam in the western Pacific.

Fortunately, this is the sort of problem that US diplomacy is usually able to resolve successfully. [sun]

Rear Admiral Lou Yuan – deputy head of the Chinese Academy of Military Sciences – made his chilling threat while speaking at a top level military summit.

“What the United States fears the most is taking casualties,” the notoriously outspoken military expert declared.

He said the loss of one super carrier would cost the US the lives of 5,000 service men and women. Sinking two would double that toll.

“We’ll see how frightened America is,” he then said

The Chinese have their “adults” lined up to talk to the US’ “adults” – or, even, John Bolton. 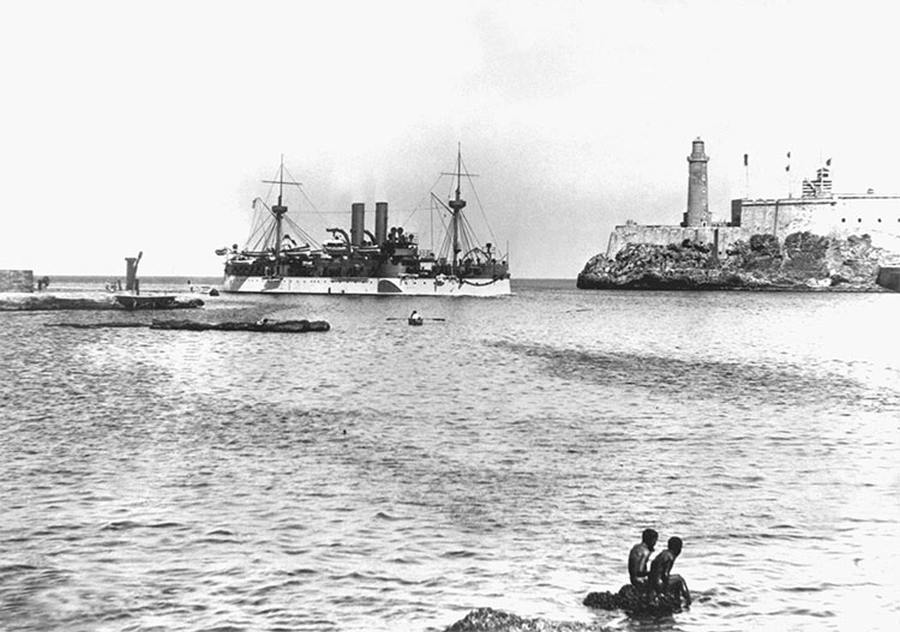 One of the amazing things about propaganda is its long-term effectiveness. When a government puts out a pile of lies, they don’t bother to unwind them later. So, decades after an incident you’ll find a split occurring in which there are people who still believe Iraq had weapons of mass destruction, and other people who know that the first group of people are dupes.  “Remember the Maine!” – well, what about it? People remember one story, but is it the right story? As a matter of curiousity, test yourself:

1) The Gulf of Tonkin incident, in which North Vietnam fired upon the USS Maddox:
a) didn’t happen
b) did happen
c) was mis-reported “friendly fire”

2) The Maine blew up in Havana Harbor because of:
a) Spanish guerillas
b) Cuban revolutionaries dragged a mine under it to frame the Spanish
c) a flaw in the design of the powder magazine caused a spark that blew the ship up

3) The USS Liberty was attacked and severely damaged by:
a) The Spanish
b) Israeli combat jets
c) North Vietnamese
d) Al Quaeda

4) The Ehime Maru was:
a) A World of Warcraft boss
b) A Japanese trawler that was rammed by a US Los Angeles attack sub whose commander was showing some civilian VIPs “look how fast we can surface this thing! dang!”
c) A WWII Japanese destroyer that ran aground near Iwo Jima