There were scandals a few years ago regarding test-cheating by operators of the US’ strategic missile systems. [nyt] But that’s just cheating. What about “rank incompetence” in the forces that prop up the nihilist triad of ‘mutual assured destruction’?

By the way, the next time the US is getting all bent out of shape about the potential for North Korea to sell ballistic missiles, remember that the US gave the British everything they needed in order to build Polaris, then Trident missiles, and the Vanguard-class British nuclear ballistic missile sub is a domestically-built clone of a mostly US-designed ship. It’s totally OK for the US to proliferate sub-launched ballistic missile technology to another country, but imagine the shit-fit that would happen if one of the US’ competitors in the worldwide arms market tried to sell such technology.[1] The US did not proliferate H-bomb making techniques to the British … oh, I can’t keep a straight face: of course they did.[2] And France learned from the UK/Canada, then taught Israel, and Israel taught South Africa. Meanwhile, the Soviets leaked a bunch of information to China, who then proliferated to Pakistan, while the Canadians proliferated to India and the Pakistanis set up an Ebay store in the form of the A Q Khan network who proliferated to Libya, Iran, North Korea. [3] 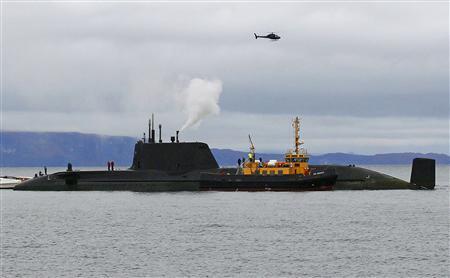 Anyhow, the British nuclear ballistic missile sub force is, for all intents and purposes, the same as the American one (only smaller, shabbier, colder, and wetter) – and it’s not a great model of naval competence. The inaptly-named HMS Astute ran aground off the Isle of Skye and required a pair of tugs to dislodge it. There’s nothing as “stealthy” as a ballistic missile submarine stuck on the surface, balanced on a big rock.

It is the “largest and most advanced” sub of its kind (in the Royal Navy) but it’s a sad testimony to the fall of Britain’s famous naval competence. [4]  Which… was largely imaginary anyway. By the way, budget cuts and mismanagement have pretty much obliterated the Royal Navy, a feat the even less-competent Germans and Spanish never managed.[w.i.b.]

The submarine got stuck, for unknown reasons, during a routine exchange of crew members.

“At some point she touched the rudder on the bottom and they weren’t able to get her off immediately,” a Navy spokesman said.

I’m baffled that anyone could call “navigated onto a rock” ‘unknown reasons’ but perhaps it was a fast-moving stealth rock. 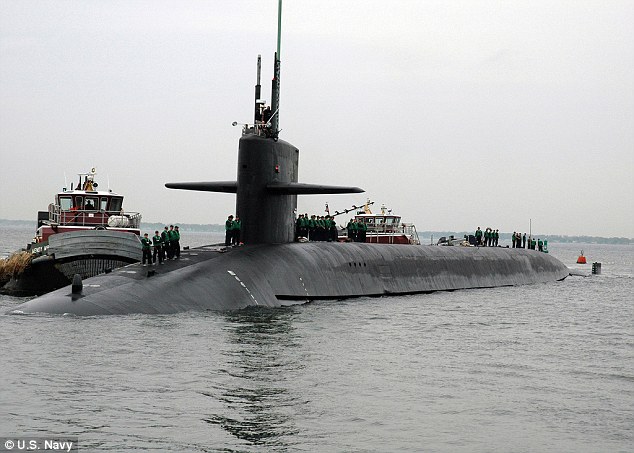 A better excuse would have been that they had deliberately done it so as to reduce the embarrassment of the US Navy’s Nathaniel Greene and the Atlanta, both nuclear subs which ran aground in 1986.[5] The Nathaniel Greene, a ballistic missile sub, would presumably have been packing a complement of 16 nuclear-armed Trident missiles (the Astute, likewise, except Trident-2s instead of Trident-1s)

Last year the USS Georgia hit a channel buoy then ran aground on a sand bank. The reports say that the commander was “reassigned to Submarine Group 10” which I assume is the gulag leg of the triad where careers go to die. In Russia, he would have gotten a 9mm in the back of the skull. [6] None of these are minor incidents. For one thing, the anechoic rubber cladding on those submarines is expensive and when you scrape it on a rock, you’ve just spent millions of dollars. The unclassified cost of the Georgia‘s sandbank sojourn is $1 million. I suspect that is a seriously downplayed number.

Meanwhile the US press chose to report that a Russian “signals intelligence” ship was roaming up and down the coast (of course it was) – that’s the ship Donald Trump said he wants to destroy in international waters, by the way[nyt] – presumably they were having a ROFL-fest recording the conversations between the tugboats and the red-faced secret squirrels on the sandbank-decorating $2 billion ornament. The Georgia is no stranger to embarrassment, unfortunately [7] – in 2003 a missile-handling team accidentally tore a hole in the nose of a Trident missile (motto: “but nothing nuclear leaked out, so it’s OK”) and there were court marshals galore when it turned out that the weapons handling facility that was supposedly training people how to move MIRV’d ballistic missiles around had been padding the scores. And:

In December 2010, a bolt inadvertently left in one of the sub’s engine housings did $2.2 million in damage and forced the boat into three months of repairs.

As my old friend Sazz said, “you can count on the Navy to really fuck things up.”

The British whistleblower who told his story to Wikileaks had some pretty awful things to say. [wikileaks] Maybe they’re true, maybe they’re not – but I’m inclined to believe pretty much any story of military incompetence that is remotely possible.

A problem occurred with the Main Hydraulic Plant. I stood at the laundry where the mechanical engineers (ME’s) hangout; to gather information. Somehow sea water was getting into it. The amount of actual hydraulic oil in the plant had fallen to 35% the rest was sea water. An ET ME SM called the officers plans to deal with the situation “stupid”. Weeks had past and the problem was still there. I then heard a Leading ME say there’s an estimated 4-5 hundred Litres of sea water in the main hydraulic rep tank. The problem was there until the end of the patrol. Hydraulics is used to open the muzzle hatches. This defect stopped them from doing a Battle Readiness Test (BRT) which proves that the muzzle hatches could of opened whilst on patrol, and that if we needed to we could’ve launched.

That was on the HMS Victorious, not the HMS Vengeance – which was the British ballistic missile submarine that tried to launch a Trident missile off the coast of Florida (!) that veered toward land before its safety systems kicked in and it flew into the water. Or, maybe it just was so confused it flew into the water and the British claimed it was safety systems not further incompetence. Either way, it was just a very expensive test missile without a warhead, or now there would be a JBUFU going on off the Florida coast while everyone tried to find the warheads. There was some embarrassment and awkwardness after that, especially because the British had just been talked into spending another $60 billion on their undersea F-35.[cnn]

I could sometimes here alarms on the missiles Control and Monitoring Position (CAMP) while laying in bed. I later found out that I would’ve been hearing them more frequently if they didn’t mute the console; just to avoid listening to the alarms This is the position that monitors the condition of the missiles, and they muted the alarms. One of the watch keepers told me and laughed about how they would deal with any issues; they would deviate from set procedures because the procedures can be “long and winding.” He said “sometimes you just know that you can adjust a valve slightly and that would solve the problem. Following the procedures might take you down a long and winding path.” You might think that’s no big deal, just an engineer using his engineering skills; if he was caught doing this kind of action on an American submarine it would cost him his job and possibly his freedom. If you work on the Strategic Weapon System you must follow the procedures, mistakes can be catastrophic.

A mistake was made on the Panel in the control room. A small mistake from this position can cause a disaster. The fixed firefighting system Weapon Stowage Compartment (WSC) fog spray was accidentally activated by the control room panel operator. None of the electrical isolations that are required to be made were made; creating a high risk of fire in a compartment which contains torpedoes. It sprayed seawater over everything in the compartment; torpedoes, lights, torpedo monitoring panel; everything. I was called down to help with the clean up by the coxswain; the place was flooded. Lucky there was no fire, this time. The coxswain exclaimed “I wonder why anyone wants to work here, everything is dangerous; one little thing and we’re all f**ked!” He also expressed concern about water spraying on electrics. Someone then said “lucky it’s your last patrol then.” We all laughed.

These systems not only endanger all of humanity – they are unreliable, expensive, and managed by blockheads. The more we have, the higher the probability one will fail catastrophically.

Just in case some of you didn’t catch it, a nuclear ballistic missile submarine costs about the same as a wing of F-35s. I kind of didn’t want to belabor that point, but it’s a noteworthy indicator of how ludicrously expensive F-35s are. Since new missile subs would probably be subject to the same engineered overruns as F-35s, there will be a tendency to leave the ageing sub fleet out longer.

Electrical fault triggering a fire and propellant explosion in the missile battery is what blew the Kursk’s bow apart [wikipedia] and killed (some slowly) all 118 of her crew.

Advice: do not read the entire whistleblowers’ report before bedtime. It’ll ruin your sleep.

With regard my comment about “British naval competence” being imaginary: the Royal Navy was big and very professionalized with lots of rituals and a long history. But winning because you’re big, or your enemy is less competent than you, is not the same thing as competence. Even the incredible Horatio Nelson’s idea of strategy was to shoot faster than the enemy while charging straight at them: a strategy that works OK if you’re numerically close. (Nelson’s charge into the middle of the French/Spanish line worked because the French/Spanish command/control wasn’t very good, i.e.: they had superior incompetence at the critical point of the battle.)

My comment above: “By the way, budget cuts and mismanagement have pretty much obliterated the Royal Navy, a feat the even less-competent Germans and Spanish never managed” is a reference to a piece in “War Is Boring” which describes the Royal Navy’s current capabilities. It’s … incredible: [w.i.b.]

Today the Royal Navy is capable of routinely deploying no more than six warships on short notice. The British fleet, once the world’s mightiest, is now down to fewer than 90 ships in total — a token force.

Things That Delight Me: Things I Won’t Work With » « Vendredi Voltaire: Prayers