Mind-boggling surrealism is the order of the day.

By now you will have already seen the news “Trump Administration Announces Rapid Withdrawal From Syria” – it’s going to be a yuge withdrawal, one of the best. Does that mean that the hundreds of millions of dollars worth of secret bases are going to be abandoned, or are they going to have a flag-raising ceremony and turn them over to the Russians, or what?

Reading between the lines, it appears that the US has sufficient hundreds of millions of dollars worth of bases in Iraq, and are consolidating them. But who ever heard of The Pentagon downsizing anything unless it was a preparatory move for upsizing it massively? There’s got to be much more going on here than meets the eye. But, since it’s been announced without a cloud of trial balloons, I’m willing to bet that it’s a tremendous surprise for someone. Probably the Syrian Government, for starters. (“Hi, we are un-invading you. Kthxbai.”) I have to pause for a moment as I imagine that scenario, where Assad is informed that he’s been un-invaded in an unexpected early morning tweet-storm. Putin gets woken up by an aide, “What!? He was supposed to wait until Christmas! That blockhead!”

Here’s where the story gets even more surreal, for me:

Naturally, I wondered who was speaking for The Coalition, and I took that phrase and punched it into Google: 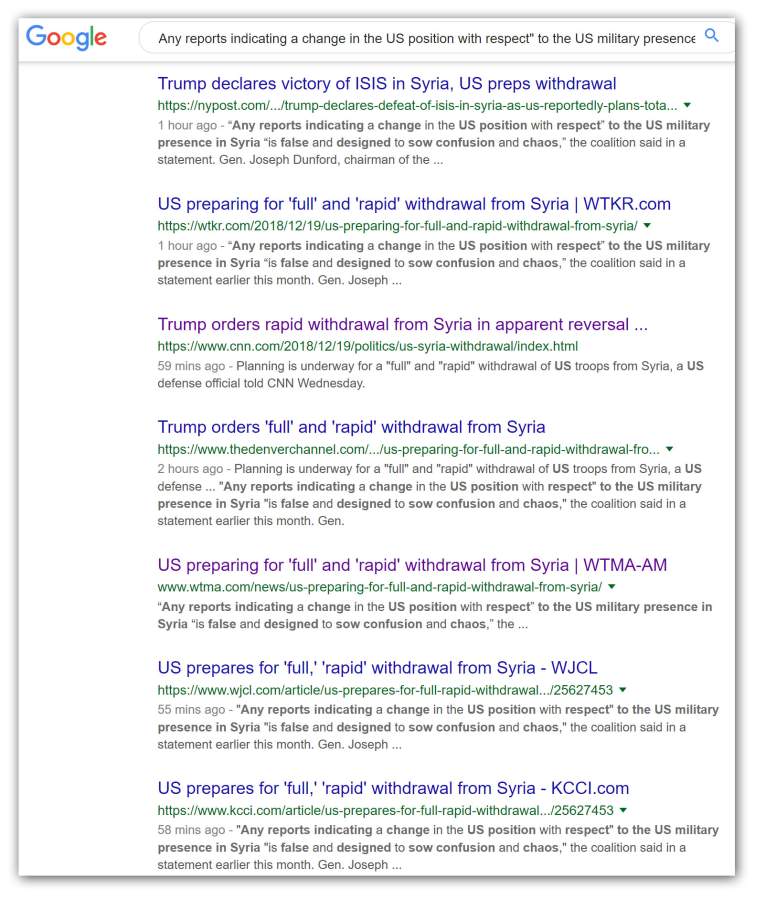 Does it look to you like the media took a press release from someplace and handed it to an AI that changed a few words here and there – like Chris Hedges plagiarizing from Hemingway – and published it? All of those “articles” are practically word-for-word.

It makes me, seriously, wonder if some hacker is having fun with the Reuters newsfeeds, and has just dropped a bunch of disinformation in to see what happens. Wouldn’t it be funny if the US actually did pack up and leave Syria? 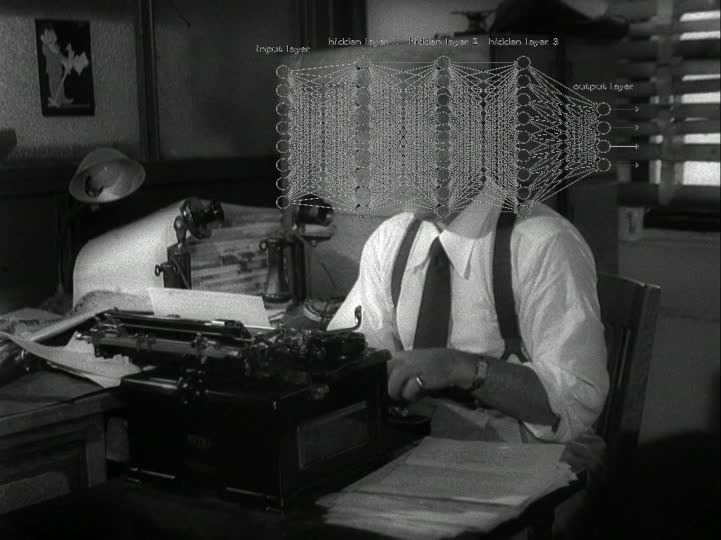 This story is either going to evolve, or vanish in a puff of bullshit-scented forgetfulness. Remember this?

Just how did The Coalition know to make a statement ‘earlier this month’ about this Trumpian whimsicality weeks later? Was that statement pre-positioned in a glass box (“in case of Trump, deploy disinformation”) or are we looking at meta-disinformation: lies about what lies that liars might lie?

The “deep state” Trump is so worried about is the momentum of the establishment that is ignoring Trump’s bizarre attempts to grab the steering wheel and aim the ship of state for a lighthouse. I no longer believe claims of withdrawing troops (or stopping support for the Saudi war in Yemen) – this is …

Do I file this under “art”? Or “We’re all fucked”? I don’t even know. This is a surrealist masterpiece. It’s like Kafka dropped mushrooms with Alfred Jarry and they both went to a Sisters of Mercy concert and came home and crashed on Edgar Allen Poe’s couch, woke up in the morning, and started to write.

It would be funny if the troops just said “screw this” and started coming home. Except we can’t expect authoritarian goons to suddenly smarten up and do the right thing. That would make a great art project: a video, professionally produced, of soldiers saying “you know what? this is bullshit! I am going home.” and they all start car-pooling to the airport, “let’s get out of here.” “Yeah, first round of beers is on me when we get home.” Seriously, why not? Then the video ends with a message: “It’s a volunteer army. You can un-volunteer.” Hey, Vladimir? If you want to underwrite it, have one of your underground mole-agents contact me the usual way and let’s make this happen.

All this story tells me, I’m afraid, is that the US Military controls the government, not the other way around.