The coal mining jobs are never going to come back. Mostly because the people who used to do them have gone on to do other things, or have died of their injuries. Out here in Pennsylvania, you can still find old-timers (like my neighbor Bob up the street) who were in on the tail-end of the deep mining, worked through the heavy dragline strip-mines, and finally got out of it when the big machines started doing most of the work and mining was no longer a human task. It turns out that humans are expensive, unless you can economically subjugate them to the point where they work for whatever you tell them they’ll work for.

Here’s a song by Slaid Cleves that will make you cry while you read the rest of this.

I don’t know why I saw Matewan [wc] at its theatrical release in 1987, but I did. At the time I didn’t think it was a great movie and I still don’t. It is, however, an interesting movie and it portrays Pennsylvania coal miners’ life around the turn of the century.

Unlike a typical western, the story begins with a stranger coming to town. But he’s not an Eastwoodian nihilist packing six guns: he’s a labor organizer. There are oblique references to his being part of IWW (the “Wobblies” – the Worker’s International) obviously there is going to be trouble. It may surprise you to learn that, in Matewan, the mining company has got the workers thoroughly under its thumb, with corrupt bosses, company stores that deduct from wages, and a company boss that can pretty much do whatever he wants because the workers have no contracts. After my last few years’ of reading about early industrial age USA, I think it’s a fairly accurate portrayal of the typical situation: bad. The mining company responds to growing worker unrest by shipping up a trainload of black workers from down south. There are also tensions with the Italian immigrant miners. It’s a good portrayal of how the industrial capitalists pitted everyone against everyone in order to “divide and conquer” and keep the workers ignorant. 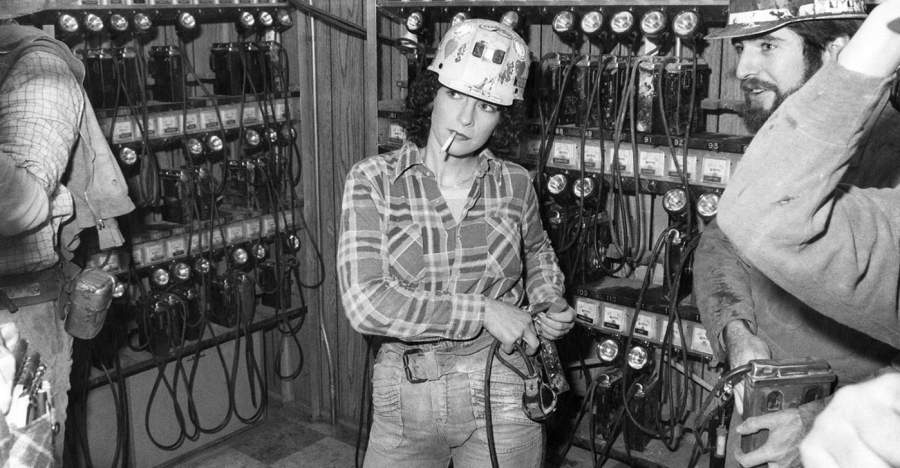 James Earl Jones plays the spokesperson for the black miners almost as though he’s asleep. It’s an interesting performance. The movie has some tried-and-true tropes, like the women reaching out to across cultural lines behind the men’s backs, over feeding children. But perhaps some of those tropes are true; we need to remember that women also suffered and died in the mines. Being able to hold entire families under their thumb gave great leverage for the mining bosses.

Why would anyone wish for those jobs to come back? It’s possible, I suppose, that someone does but the only person who’d be happy with it would be a company boss.

Coal mining was a hard, dirty, short life. There are still billboards in Clearfield, near where I live for lawyers that want to represent people injured in mines or damaged by coal dust inhalation. You’ve got to suspect that there wouldn’t be signs like that, if the coal mining companies actually took care of “their” people – but they didn’t. That’s not how power works. Why would they screw their workers into inescapable shit jobs if they planned to take care of them? The game has always been to monetize ignorant and helpless workers, keep them ignorant and helpless, and wring money from them, from birth to the grave.

For those of you who don’t understand what Mr Cash was singing about – it’s about a miner who’s in debt to the company store. Miners were responsible, like today’s Uber drivers, for providing some of their own gear. They’d buy it at the company store, and pay with company scrip. They’d get paid in company scrip, too. They might pay their lodging with company scrip – because they were renting from the company. In other words, the company “vertically integrated” its business to capture all of the workers’ economic output. And, if the straw boss docked a miner a couple of loads of coal because they were late or talked back, or damaged some gear, then the worker might fall behind on their payments and be “fined” to drive them deeper in debt. If the strategy sounds familiar, it ought to – it’s basic “debt peonage” and it doesn’t make a difference if we’re talking sharecropping, tenant farming, or student loans – they all work the same way. It’s the “usury” the bible warns about and forbids. Again – who’d want these jobs? And what kind of garbage human would want to be the straw boss?

I took a couple down-days, there. Sorry about that. Things have been surprisingly busy here and I didn’t take the time to build up a bow-wave of postings like I usually do. To tell you the truth, the news has been so depressing lately, I sometimes don’t know what to say because all I want to do is scream at the internet.

If you’re not familiar with Slaid Cleves, there are a lot of people who aren’t. His album Broke Down is some good americana. I saw him open for Ray Wylie Hubbard, once, and he’s an excellent song-writer. His song “Bring it On” is another favorite of mine. [yt]

Downsides of a Primarily Offensive Strategy » « Hypocrisy and Accusations of Hypocrisy