I ordered a tactical defense knife (“the perfect tool for women”) [stderr] so I can use it for some test-cutting. I’m not sure where I’ll go with this, but I am probably too busy/lazy to make my own tactical llap goch sgean dgu to compare against, so I may have to use my Vietnam War-era Gerber MK I. 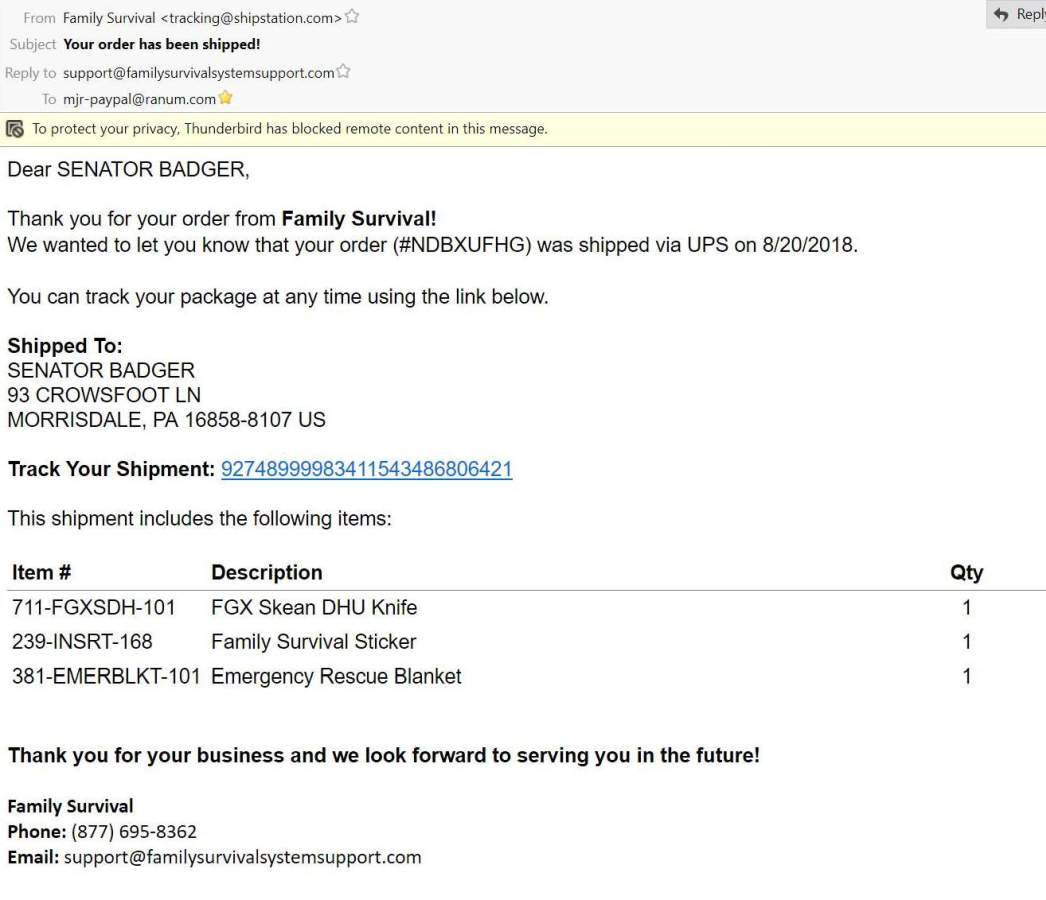 It sounds like I am fortunate – not only am I going to get the knife, they’re giving me a mylar sheet and a sticker!

Maybe I can find an old Ginsu on ebay and compare the tactical defense knife against that monstrosity from the past.

Anyhow, that’s not what I wanted to talk about today. Notice the name I bought the knife under? It’s an old habit from decades of doing computer security – a “honeytoken” – a value that I control being inserted into someone else’s database and I can watch where it crops up, thereafter. Some people call this a “data canary” technique.

Back in the late 80s I signed my cat (Dr Miso Katz) up for a subscription to a certain magazine, and it became a fascinating exercise to see where that name kept cropping up, again and again. In the 90s I hit upon putting a certain user in a system’s password file, and setting up an alarm in the user’s .profile so that I’d be notified (and everything they did, recorded) if that user ever logged in. That alarm “dinged” remarkably quickly, and that was how I discovered that a certain organization had been compromised and didn’t know it, yet. (It also served as a benchmark for the speed of the hackers’ password cracking system and size of their database). Many years later, I convinced one of my consulting clients to add a customer named “Fred Fishlips” to their database, and set Fred up with a gmail account that forwarded to their security ops center, and a few other things like that. A year afterward I got a call at 3:00am asking me if I could get on an airplane out that night, because Fred Fishlips was getting email from a spammer. Fortunately, they had also done another thing I suggested, namely set up a process that updated Fred Fishlips’ birthday to ${today} every night. That way if they ever found a copy of their customer database on pastebin, they could tell what day it had left the building. These little things can save a huge amount of diagnostic time in an emergency, and it’s a simple outcome of an exercise that I tried to teach for decades:

If you are responsible for security

If you know Fred Fishlips is not a real user and nobody ever should be accessing that account’s information, you can have your edge firewall look for the string “Fishlips” and ding if that pattern leaves the network. Well, now, if you had that in place and I hadn’t changed the name to protect the honeytoken, your alarms would all be ringing now that you’ve read this blog-posting. I have been using Fred Fishlips as an example for a long time, and I was teaching a class on honeypots at SANS in Boston, when someone trolled me, hard: I said ‘Fred Fishlips’ and a guy in the class replied, “yes?” He insisted, for a few moments, that his name was really Fred Fishlips and I started apologizing and we all cracked up laughing.

I’ve never had access to a copy of Palantir (it’s very expensive!) but I used to occasionally day-dream about building an evolutionary contact-map of who sells which of my various IDs to what marketing company. Sometime around 1996 I started signing up for conferences using traceable or ridiculous corporate identities. My most successful, to date, was “Heavy Weapons Research Division, Bellwether Farm” which I enrolled at an RSA Conference around 1999. I started getting messages under that title nearly immediately. After a year, I started getting invitations to attend small arms sales conferences and I was so amused I actually emailed the marketing contact there with a message: “Heavy Weapons Research, not Small Arms.” Then, I got 2 flyers for a conference of artillery munitions providers. Since Bellwether Farm has no End User Certificate, and artillery is expensive stuff, I have refrained from pursuing and of that any further. Though it would make a fun retirement project to try to get an invitation to attend some arms dealer conferences and publish what they’re about. I keynoted a computer security conference in Qatar, back in 200?5, and it was co-morbid with another security conference featuring crowd control and counter-insurgency gear. I checked out the show floor and it was depressing as hell. Arms dealers’ conferences are just like everyone else’s: just a bunch of sales guys who want to send you their brochures.

One of my more interesting canary accounts was my old ranum.com!mjr-paypal account. I have an Ebay account and a paypal account that are different (and have different passwords) so I can detect if either of those services customer-base gets used for spamming. I used my accounts for a long time and about 2 years ago I started getting a lot of spam on the mjr-paypal account. My conclusion was that a certain seller who was offering fairly low-cost items of a certain type was selling their customer-list. I use many email accounts for many websites (and all have different passwords) and I watch the ranum.com server logs for login attempts on them – that’s a good early-warning system that a site has been compromised, and it neatly tells you which.

Wow, holy moley! Did you know they still make Ginsu knives? And they’ve branched out to offer a wide variety of blade shapes, etc. I just ebay’d up a Ginsu steak knife that looks to be about the same length as the tactical thingie.

Now I want to make a damascus high carbon steel Ginsu-inspired blade. My sense of humor is bad for me, I know.

“Going to odd conferences and doing reviews” would make a pretty cool blog-site for a retired and bored person. I hate travel too much, after too many airports and hotel dinners, or I’d seriously think about doing it.

My favorite crossed conference was the time Secure360 was held at the same hotel as the Society Of Forensic Toxicologists’ annual meeting. I actually attended a couple of their talks, and bought a kickass polo shirt, black cotton with a skull and crossbones and “Society of Forensic Toxicologists.” They were a pretty cool bunch of people, very enthusiastic about their craft and not at all creepy.

For a number of years I used “Bellwether Farm” as a designation for my farm, on any business reply forms. That was based on Connie Willis’ excellent book, Bellwether. [wc]