Around 1994, I attended a small conference in Washington, DC; it was memorable because it was at that event that I really understood that the US imperial war faction intended to militarize cyberspace. At the time, I thought that was just their way of spending the “peace dividend.” Perhaps it was that, too.

I wound up sitting next to my old friend Bill Cheswick, and a fellow wearing little round black glasses and a motorcycle jacket. He was definitely out of place in the Washington camo and suits crowd. It was Bruce Sterling. I managed to avoid going all fanboy but it took a major force of will. At a break, the three of us started talking about some security stuff and Sterling mentioned that he was researching “dead media” – communications systems that had fallen out of use – and I was able to tell him about Napoleon Bonaparte’s heliograph system, which was ground-breaking for its time, but which did not manage to avert Napoleon’s fate and fell into disrepair after his exit from the world stage. Sterling was fascinating to me (not just because I’m a fan) with his interest in the implications of new technologies on civilization. It was clear at that time that he thought the internet wasn’t as big a deal as it was cracked up to be. 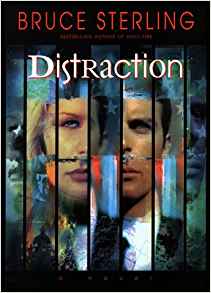 In 1998 he came out with a book called Distraction. [amazn] It’s dystopian, of course (this is Sterling) – the US has collapsed following the death of an information economy value bubble. Oscar Valparaiso is a political operative for hire, who’s just coming down off a campaign in which they got some candidate or other elected, and he is looking for more work for his “krewe” – a small cohort of contractors that flit in and out of his life. Sterling, as he has done so many times before, predicts the future through the lens of the past:

“So get a grip.” Oscar flipped back his laptop screen. “Now, take a look at this. You too, Audrey. You’re systems professionals, and I need your input here.”
Argow examined Oscar’s laptop screen, his owlish eyes glowing.
A lime-green plane with lumpy reddish mountains. “Uhm… yeah, I’ve seen those before. That’s a, uhm…”
“It’s an algorithmic landscape,” Audrey said intently. “A visualization map.”
“I just received this program from Leon Sosik,” Oscar said.
“This is Sosik’s simulation map for current public issues. These mountains and valleys, they’re supposed to model current political trends. Press coverage, the feedback from constituents, the movement of lobbying funds, dozens of factors that Sosik fed into his simulator… But now watch this. See, I’m moving these close-up crosshairs… See that big yellow amoeba sitting on that purple blur? That is the current public position of Senator-elect Alcott Bambakias.”
“What,” Argow said skeptically, “he’s way down that slope?”
“No he’s not, not anymore. He’s actually moving up the slope…” Oscar double-clicked. “See, this huge khaki mountain range represents military affairs… Now I’ll kick the simulation back a week, and run it back up to the Bambakias press conference this morning… See the way he kind of oozes up to the issue, and then suddenly jets across the landscape?”
“Wow!” Audrey said. “I’ve always loved old-fashioned hotshot computer graphics.”
“It’s garbage,” Argow grumbled. “Just because you have a cute simulation doesn’t mean you’re actually connecting to political reality. Or to any kind of reality.”
“Okay, so it’s not real. I know it’s not real, that’s obvious. But what if it works?”
“Well,” Argow mused, “even that doesn’t help much. It’s just like stock-market analysis. Even if you get some technique that does work, that’s strictly temporary. Pretty soon everyone else gets the same analytical tools, and then your advantage disappears. You’re right back where you started. Except for one thing. From then on, every-thing becomes much, much more complicated.”
“Thanks for that technical insight, Bob. I’ll try to keep that in mind.” Oscar paused. “Audrey, why do you suppose Leon Sosik sent me this program?”
“I guess he appreciates the way you airmailed him that binturong,” Audrey said.
“Maybe he thought you’d be impressed by this,” Argow said. “Or maybe he’s so old and out-of-it that he really thinks this stuff is new.”
Oscar looked up from his laptop screen. The nine people on the soundstage had suddenly fallen silent. They were looking at him.

It’s not immediately obvious that marketing would turn real-time and feedback-driven; that’s the sort of thing Sterling sees that we don’t. In the world of Distraction the hero hides his election-manipulating system behind the false front of a university’s science department, The Collaboratory. As the story lurches and meanders to a climax we learn that the Collaboratory is being opposed by a similar polling agency that is attempting to manipulate the proletarian base on behalf of the other side.

It all reminds me of the election where a candidate broke out unexpectedly from the pack and took on Hillary Clinton – the presumed heir – running a brilliant new internet-enabled “ground game” that bypassed the Democratic Party establishment and defeated Clinton. I’m referring, of course, to Barack Obama. Remember when Obama’s “ground game” was a result of cash raised directly over the internet (which the Democratic Party establishment completely did not expect, and had no plan for) and rapid, organic, messaging that was aimed to constituents that had expressed interest in certain issues? Barack Obama’s campaign was also notable because they bought a lot of advertising on Twitter and Facebook – again, bypassing the Democratic Party establishment’s stock playbook and bringing Obama an unexpected win in the primary.

As Director of Analytics for the Obama 2008 campaign, my job was to use data to help the campaign make better decisions. We started with just one simple experiment back in December of 2007. This experiment taught us that every visitor to our website was an opportunity and that taking advantage of that opportunity through website optimization and A/B testing could help us raise tens of millions of dollars.

This experiment tested two parts of our splash page: the “Media” section at the top and the call-to-action “Button” 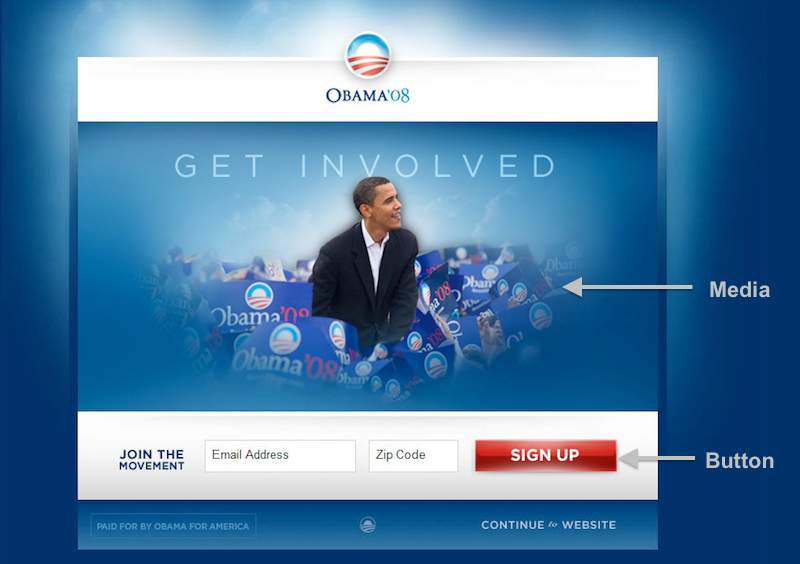 This is why I refuse to get excited about the Russian hacking and the Facebook data and Cambridge Analytics. Sure, there’s something to all of that but the meta-story is the dying wails of American politics – the shock and awe as the well-meaning Americans were unequivocally forced to confront the reality: that a huge percentage of Americans are ugly brutes who are cowardly, ultra-nationalist, racists. And that they, themselves, had helped enable the disaster because they’ve also played cheerfully along with the militarism, fetishization of the armed forces, and willingness to accept transparent lies in the interest of bombing someone, somewhere else – as long as they’re not American they don’t matter. I’m unexcited about Americans who complain that their political opinions were manipulated by the Russians or Facebook or Cambridge Analytica because they’re the same Americans that allow The New York Times to exist, never mind FOX News.

In other words: there are no well-meaning Americans. There are just ultra-nationalist imperialists and passive imperialists. Over here we are belly-aching about which oligarch “won” the “election” but meanwhile nobody’s able to stop the wars, or rein in military spending. I’m happy to see the protests about gun control; it shows that America is not utterly stupefied, but watch what comes next: Congress does nothing. Perhaps bump stocks are going to be treated as “machine guns” because, you know, they do basically make the rifle act like an automatic weapon. And that’ll be it. Like military spending, surveillance, or covert warfare, the important issues will not appear anywhere where The People have a chance to do anything more than whine and accept reality as the choice between evil and disgustingly evil.

The garbage human contingent of Americans, who gibber and cheer for Trump – they’re just the winners of an election that was a national disgrace either way. Or, it would have been, had most Americans even possessed a sense of shame. What the Russians did was Obama’s “groundbreaking internet-based campaign that appealed to young people” – it was just for the other side. Any idiot should have seen it coming because they were going to get subjected to the same propaganda and lies from either side. It’s the same diet Americans have consumed every election for two centuries; even the Facebook and Twitter algorithms aren’t new: candidates were tuning their “messaging” based on opinion polls back in the 1950s. And “messaging” is just a nice word for “lies.”

Anyone who wishes to be considered a decent human being has a duty to be much, much, more cynical than they think they are. One simply cannot sit and consume political rhetoric and advertising without thinking about it and asking “is this bullshit?” when anyone says anything about politics at all. Trusting the system at all is irresponsible. If you think about it, the complaints about Facebook troll-farms are nothing more than saying, “waaaah! We trusted Facebook!” That’s pretty embarrassing.

We are getting to the point where tolerating the system is irresponsible; perhaps we have passed that point. The fact is that most Americans do not call for the arrest and trial of George W. Bush and his cronies, or Barack Obama and his. The fact is that most Americans tolerate and support a brutal regime that is currently engaged in at least seven wars that overtly violate international law. Unfortunately, as Howard Zinn says, once a certain level of militarism becomes the norm for a society, the militarists will have carefully closed off all practical options that the people can take, short of massive social upheaval, protest, and insurgency if necessary. Howard Zinn was often criticized for openly supporting direct action and civil disobedience; what if we are past the time when those methods will work? American gun nuts talk about the 2nd Amendment being necessary in case the government becomes a threat to the people – yet they deliberately fail to notice the US citizen that the US government killed with a drone strike. And, for a follow-up, they killed his son, too. Is it time for the guns to come out? I think it’s too late.

Facebook and Cambridge Analytica and the Russians are problems that America saw coming, or should have seen coming long ago. It’s like complaining about a hangnail when your clothes are on fire.