And it was OK. I am generally sick of movies in which the final resolution is two people in spandex beating the crap out of each other.

Here’s a though that is not good to have, when watching this scene: 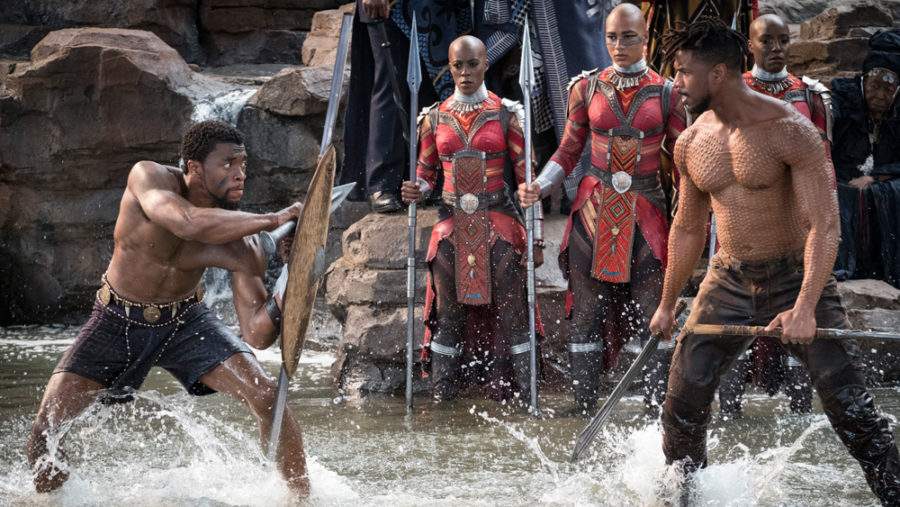 “Supreme executive power derives from a mandate from the masses, not from some farcical aquatic ceremony!”

I kept giggling at random through the rest of the movie.

The costumes are beautiful and so were the actors. As usual for one of these comic book-derived movies, there were ideas and moments that were really good, but damn I’d like to see one of these movies in which the hero (for example) recognizes that Killmonger is a valuable talent and a potentially strong ally – he’d be an impressive person to have on one’s team, not decorating a compost heap – then negotiates an arrangement with them that is beneficial to everyone. Of course, that’s never an option because of the simple manichean view of the world that Hollywood wants us to absorb so we can be good militarist subjects.

Any movie with armored rhinos or polar bears is good – that’s just a general principle.

Anyone remember Ralph Bakshi’s Wizards? That’s how to resolve this sort of final conflict. Whenever I see people using hand to hand weapons in a civilization that has powerful projectile weapons; I start pulling my hair out. I know it’s not sporting to disintegrate your enemy while they are hundreds of yards away, but a king’s job is to be a good strategist not a passable brawler. Further, unless you’re a civilization that has surreal medicine, you do not want blades to be any part of how you select your monarch. Blades leave deep, debilitating, permanent marks. During the samurai era, Japan had so many ex-samurai who were missing eyes and other critical body-parts that they had to build a whole infrastructure to warehouse them. It comes back to my point about violence as the means of choosing the king: you wind up choosing strategically incompetent thugs, mostly.

The eye candy is amazing and I found myself wondering how many hours of weight-lifting we were seeing. A great deal of hard work and dedication was on display all around.

Normally I loathe the role of “clever sidekick” but Letitia Wright was perfect. If you put her character, Shuri, on a team with Kate McKinnon’s Holtzmann from Ghost Busters they would rule the world and it would be a good thing and there would be no need for big sword-fights to decide who was awesome.

My preferred ending would have been for the two would-be kings to kill each other off and for the women to take over and establish a less pointlessly violent succession, then nominate Okoye as the new guardian-and-designated-kicker-of-asses and make her the Black Panther. Civilizations need kickers-of-asses but not on the throne.

I am mad at myself for not recognizing Isaach de Bankolé in his role.

Up Close and Impersonal » « Sunday Sermon: There Must Be a Name for This Disease