Alexis Duvall, 27, allegedly punched the grandma in the back of her head, knocking her to the ground

Witnesses say they heard her yell ‘power is power, white power’ and the N-word

Duvall was arrested on suspicion of battery and being held on $50,000 bail 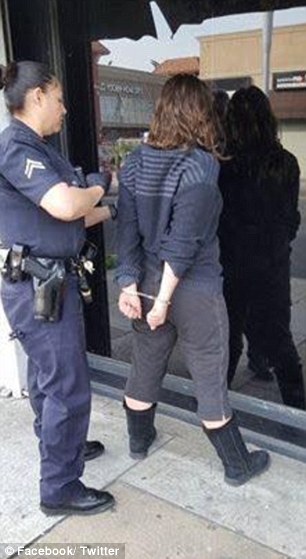 If the assailant were brown, she’d have bullet holes in her

Police apparently couldn’t be arsed to talk to the witnesses who described the attacker as using racist language. Or are the LAPD deciding that calling someone “nigger” is not racist? Perhaps it’s because so many 83-year-old Korean rapper grandmothers call each other that. Or something.

Hold onto your seats, though, because: Police say she screamed obscenities as she was arrested, and seemed to be intoxicated or suffering from a mental problem.

See? Intent is magic. If the attacker was intoxicated or suffering from a mental problem, they can’t possibly be racists or terrorists. Actually, it’s always seemed to me that the disinhibition from alcohol or certain drugs is more likely to make people behave the way they imagine behaving. As someone who has been disinhibited from various substances, I can agree with the ancient philosophers who said: “drunk says what sober thinks.” Maybe the assailant was actually acting out what was in her mind all along.

The question I wish I had an answer to is why this isn’t being reported in the US. Is it because the Daily Mail is “fake news”, or because the LAPD is a “fake police department” or perhaps racism and terrorism only happen when it’s white people getting punched in the head.

The Retro-Scope is Engaged » « Things That Delight Me: Tom Kelly on Beethoven’s 9th