We desginate, by this name, remains or remaining body parts or clothing of a personage included, after death, by the church, in the blessed. 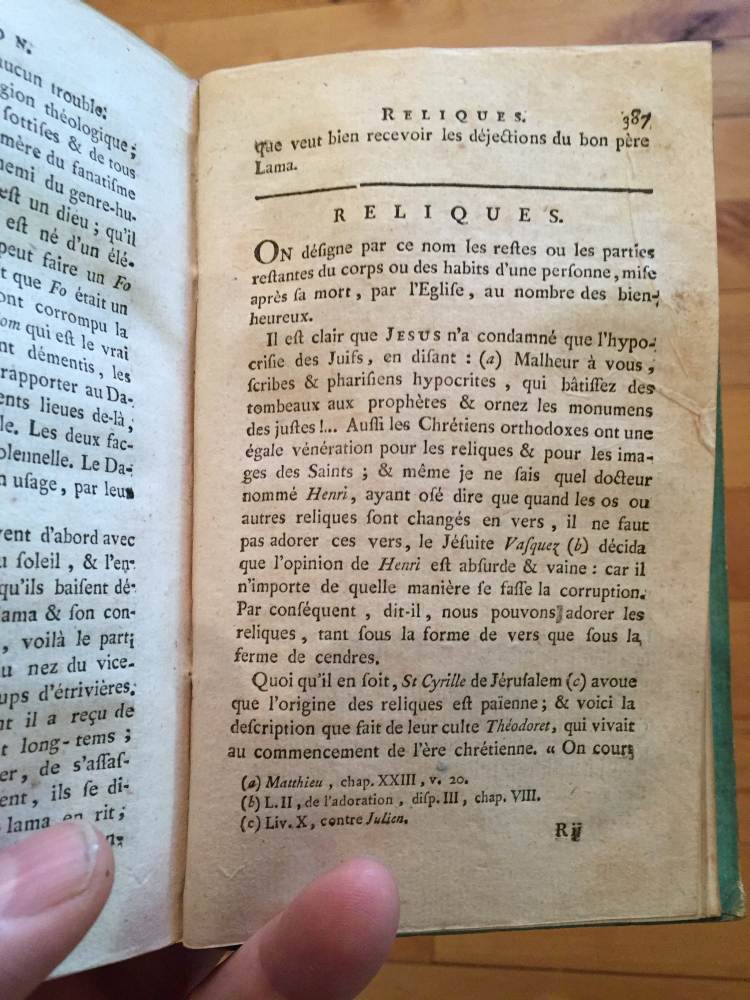 It is clear that Jesus condemned the hypocrisy of the Jews, saying: (a) misfortune on you, hypocritical scribes and pharisees, who build the tombs of your prophets and ornament the monuments of the just! Similarly, orthodox Christians hold an equal veneration for the relics and the images of the saints; &even I do as the doctor named Henri, having dared say that when the bones and other relics are transformed into worms, we are not required to adore those worms, the Jesuit Vasquez (b) decided that Henri’s opinion is absurd and vain because it doesn’t matter how corruption happens. Consequently, he says, we can worship the relics that are in the form of worms, as well as the form of ashes.

[I had this part wrong: “Farm ashes” – manure, in other words. – See comment #1] Voltaire is leading his catholic readers to realize that the grounds of Europe are scattered with saint, in the form of worm poop. Remember that, at the time Voltaire wrote this, the mechanism of decay was not understood – bacteria and fly eggs were not to be discovered for another hundred years, and Voltaire probably believed (as most did) that corruption was the process by which worms created themselves out of rotting meat.

Voltaire was not an atheist – he kept saying. Yet, whenever he got the chance he stuck his thumb in the eye of the church’s deeply held, precious, beliefs.