You’ve got to dredge back into the past for this one. Remember, Trump versus Clinton, 2016. Right before the election (because DoJ never does anything right before an election that might influence it) Comey announced that they were going to search Anthony Weiner’s laptop for possibly classified emails between Huma Abedin and Hillary Clinton. Are you following?

That’s a pretty tenuous connection, isn’t it? Especially because Clinton had already had her private server sanitized. It’s about like searching some random Fuel Rat’s friend’s laptop because it might contain emails from me. It might, indeed, but probably about Fuel Rat stuff. Same for Huma Abedin’s husband’s laptop – there might be emails from Hillary setting up a get-together, but it seems far fetched that Clinton would, for some reason, forward Abedin’s husband some secret information about Benghazi. #include <jokes/dickpic.h> even at the time anyone rational and members of the media ought to have been asking Comey, “really, FBI-bro, tell me again that by announcing your intent to search someone’s computer you’re not trying to influence the election?” The media had to adopt a ridiculously ahistorical posture that the FBI doesn’t play politics, when the agency was founded to play politics – namely to track “radicals.” 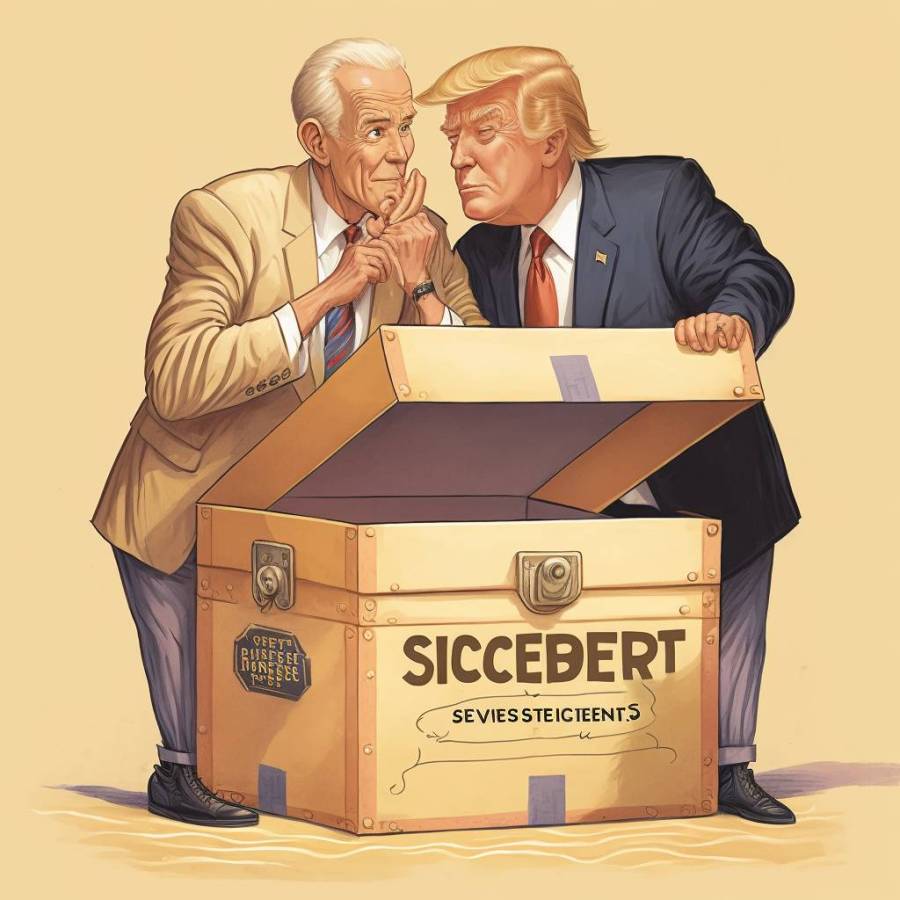 Meanwhile, there is massive hue and cry about secret documents being taken home by everyone, again, and the media and political analysts are having to pretend that the problem is, specifically, named politicians when the facts of the matter are that the classified material were distributed to politicians’ staff who boxed them up along with the other papers when they left office. Seriously, can anyone imagine Donald Trump taping up a box, let alone lifting it? Or Biden, for that matter. These guys did not climb the ladder of oligarchy just to fill, tape, and haul boxes. Neither, by the way, did Clinton who – as I have mentioned before [stderr] – would have been quite familiar with document retention policies from the briefings she got as First Lady, then Secretary of State. It’s just that these rules apply to hoi polloi. [I should do a whole posting on the government’s classification glut, but I’m not sure if I want to] 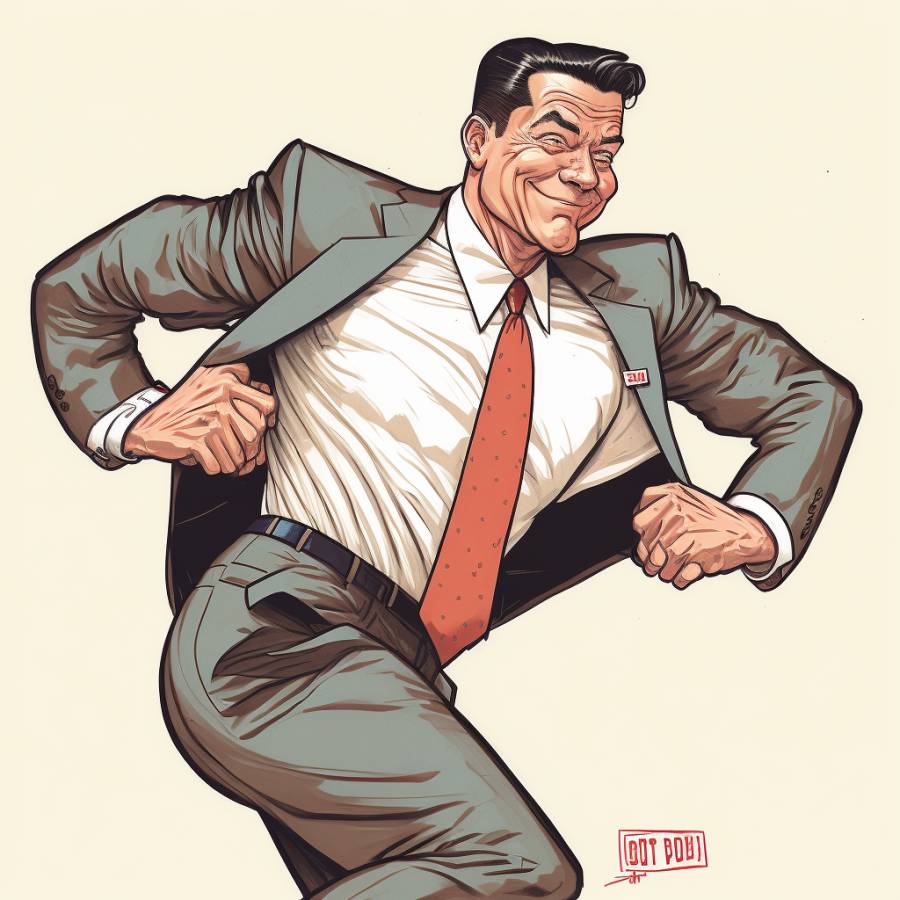 Midjourney AI and mjr: “Jim Comey trying to find his ass with both hands”

Whatever gave Comey the idea that Weiner’s laptop was worth a search? Especially when the real action, had there been any, would have been on the DNC servers and on the Department Of State’s backup system. If the DoS’ backups had been destroyed, then Comey would have had something to announce. And, also, why didn’t he investigate how and why the DoS was forwarding Clinton’s work emails from its official server to her unofficial one? [Back in my infosec days, I wrote endless executive recommendations to the effect that “work emails should not be forwarded to ‘in the wild’ servers, as they may contain customer information, operational details, or business plans.” Most companies get this right. Clinton must have steam-rolled someone at DoS who should have said, “sorry you don’t like using our email server but if you want to access your email, that’s where it’ll be.”] Like you, I was shocked at the lack of outcry by the media, who should have said “Jimbro – give it a rest. This is getting obvious.”

What’s interesting to me is how certain characters keep cropping up in the shadowy areas just in the wings of the stage. Why are they there, and not out in the spotlights? Could they have something to hide? I’m referring to folks like Paul Manafort, and Oleg Deripaska. Folks with lots of money moving around them for unexplained, sketchy, reasons. Folks who appear, now, to have been pulling Comey’s wires. [We can all look forward to Comey’s tell all, “Pratfall” once he’s old and getting ready to kick off  his mortal coil] There are some fascinating bits on Daily Kos that may help explain a bit of what happened. For one thing, a congressional panel needs to get Comey on the record regarding where he was getting his ideas. [daily kos]

Charles McGonigal, a former FBI official involved in the investigation of Donald Trump’s ties to Russia, has been charged with violating sanctions and collaborating with Russian oligarch Oleg Deripaska, the Department of Justice announced Monday.

According to federal prosecutors, McGonigal received “concealed payments” from a Russian intelligence officer in exchange for his help in having sanctions targeting Deripaska lifted. McGonigal is being charged by the Federal District in Manhattan with additional counts relating to money laundering and conspiracy.

OK that’s no big deal. Another corrupt FBI bigwig taking money from the Russians. At least it wasn’t the FSB, so that’s not a problem, right?

As chief of counterintelligence in the bureau’s New York City field office, McGonigal was among the first FBI officials to learn of the fateful conversation between a senior Trump campaign adviser and a foreign diplomat over the topic of Hillary Clinton’s emails, the Washington Free Beacon noted. Knowledge of that interaction proved crucial to the federal agency opening an investigation into the matter, which ultimately found there was no evidence of collusion between the Trump campaign and Russia.

So, there was an FBI agent colluding with a Russian oligarch, who ultimately helped discover that there was no collusion going on? I’m shocked. The timing is provocative, though:

“Investigating Donald Trump, F.B.I. Sees No Clear Link to Russia.” This was 8 days before the Trump-Clinton election. It was 27 days after Comey named McGonigal to head Counterintelligence for FBI’s New York Field Office.

And right around the same time someone started feeding Comey false leads. But, by all means, let’s let the FBI control the narrative. That has worked so well in the past.

Unlike many of the people going on about secret documents and emails, I have actually created Presidential Records. Back when I set up and managed the whitehouse.gov email server, the actual system was (sensibly!) not connected to any actual government network – it was on its own T-1 line in the server closet at Trusted Information Systems in Glenwood, MD, 30 feet from my desk. Every week I would walk over to the server’s console and run some scripts I had written, which compressed and chunked all of the emails for president@whitehouse.gov and spanned them onto 1.4Mb floppy disks, which I carefully labeled and fedexed down to Washington. After 2 years of that I was tired of it and someone else took over and Office of Science and Technology Policy (who had been working with NASA) set up their own server combining web and email, which promptly got hacked. Later, I asked what had happened with all the floppies, and it turns out they were unpacked, and volunteers had to go through and score all the emails just like they do with paper letters. Then, the floppies were put in a box, which was eventually sent to the Library of Congress. So I wonder sometimes if my chicken-scrawl covered floppies are still kicking around some archive or other. Kiss me, Jim Comey.