A few years ago I became a fanatical convert to full cast audiobooks. That’s where the book is presented more like a radio drama than just someone reading aloud.

My conversion was a result of listening to a full cast recording (By Blackstone audio, I think it was) of Plato’s Socratic dialogues. Whoever did it was brilliant – they had a guy playing Socrates who managed to speak clearly yet sound like a mumbly academic type. Picture a philosophy-loving version of PZ Myers if you will. The rest of the cast included a querulous but annoyed-sounding Euthyphro, etc. It was witty, interesting, and engaging – suddenly the words came alive and I was able to listen through the whole thing, that I had not managed to read before without falling asleep.

Another notable full cast recording is the version of Neil Gaiman’s American Gods. That’s really well done and also makes the words pop into my brain. 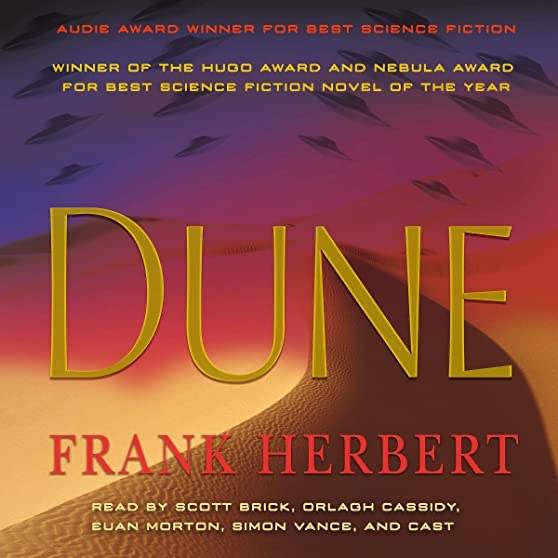 I mention all this because lately I have been listening to, and loving, Frank Herbert’s Dune on Audible. I’ve read Dune in book form I don’t know how many times, but the full cast recording, again, really pops. [audible] It’s giving me a chance to re-appreciate Frank Herbert’s {beautiful|over-wrought} mise-en-scene. I happen to like it, your mileage may vary, but Herbert, undeniably, did one of science fictions’ great jobs of world-building.

I’ve noticed there is an art-form to creating a vivid time and place in a reader’s mind, which is to simultaneously be vague while sounding precise. For example (if you’re a fan, as I am) consider William Gibson’s Neuromancer and his descriptions of technological phenomena. Go back and look at them and you’ll realize that they’re very vague yet still evocative: “A kind of consensual hallucination” what? That’s cyberspace? Every marketing meeting I ever attended was a kind of consensual hallucination, too. Yet Gibson is widely credited with the term and the concept (I’d say it belongs more to Vannevar Bush but what do I know?) In Dune Herbert plays the same technique masterfully. We learn that the ornithopters are important, fragile, can be elegant, can maneuver, and – um – that’s about it. Oh, they have wings. But compare that to a book like ${anything by Tom Clancy} that is completely situated in its time and space, and is dated the minute it rolls off the press.

Charles Stross has written some interesting stuff over on his blog [dude, you broke the future] What if you wrote a science fiction book that assumed there are technological civilizations on Earth in 2500AD? Well, there probably won’t be. Whups. You have to carefully pick and scope your idea of “the future” because it can be invalidated.

Let me give you an example:

The sky above the port was the color of television, tuned to a dead channel.

That is, of course, the iconic opening sentence of William Gibson’s prophetic novel of the future, Neuromancer. Which is now read by kids who have never experienced a television, let alone a “dead channel” – everything nowadays consumes noise-free digital signals and goes blank if it’s not getting a decodable signal. I still love Neuromancer but it’s funny how Gibson, who carefully dodged getting into future technology, stumbled on old technology. 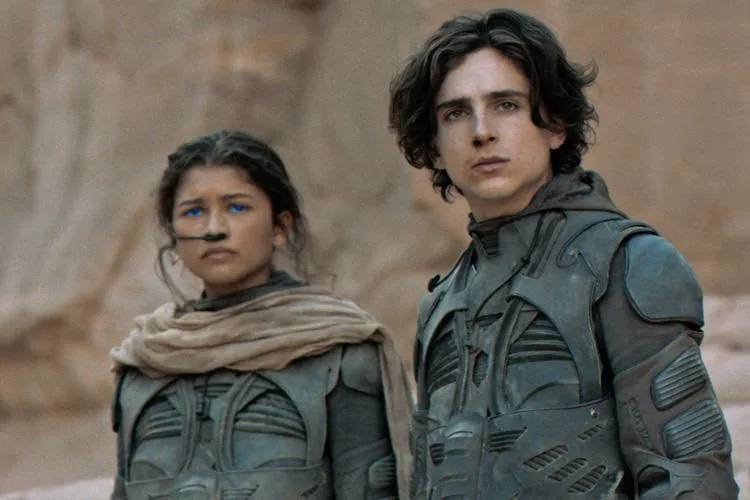 Anyhow, Dune. Are you anticipating the new version, or dreading it? I think that, so far, the casting seems to be really well done. Zendaya as Chani is perfect. Timothee Chalamet is a fey Paul. I thought Sting was a good Feyd Rautha and it would have been funny if they brought him back as Thufir Hawat, but they didn’t. The massive change in the cinema system, in which we are no longer expected to see “a movie” but rather “a series of episodes” gives tremendous flexibility for a film-maker who wants to pick through a massive narrative like Dune and doesn’t have to try to fit it all into a 2.5 hour time slot, based on Americans’ dwindling attention-span. I have hope, but I’m also sure that Hollywood will disappoint. I still with Jodorowsky had made his version, though it would have been too short to be any good and he was going to clearly spend too much time dwelling on the wrong things. The documentary about his attempt is still worth watching. [wik] If you like documentaries about disasters in the arts, Hearts of Darkness [wik] has been re-released. That’s the documentary about making Apocalypse Now and has the memorable quote from Coppola: “We were in the jungle, there were too many of us, we had access to too much money, too much equipment, and little by little we went insane” Lost in La Mancha, [wik] is another descent into film-making hell, being an account of Terry Gilliam’s attempt to make a film version of Don Quixote, a quixotic project that left a sizeable crater.

I was hoping that the new Dune would have a soundtrack by Jóhann Jóhannsson, like Denis Villeneuve’s movie Arrival – damn, that was good. I suppose nobody can afford a Vangelis soundtrack, anymore, and there are all kinds of stories about how he pulled the soundtrack for Blade Runner together late, at the last minute, and a masterpiece.

Sorry, I’m starting to ramble. Consider this to be a positive review of the Audible version of Dune.

I have to ramble a bit more about one other area where science fiction writers stumble badly: combat. It’s going to be a challenge for anyone who makes Dune, too. Basically, they have to represent an upgraded form of knife-fighting, which is somehow new and different enough that it’s believably incredibly awesome, but not ridiculous. Think about that problem for a second. Ugh. If I were the fight choreographer, I wouldn’t show Paul stabbing anyone, I’d have him step quickly past his opponent, who then falls face-down, bleeding, dead – like the way Ryunosuke dances through Sword of Doom. Again – same problem: you can’t represent someone with a samurai sword as having an amazing, awesome new technique, because if there were one, that’s how kenjutsu would be done, right now. You can only represent someone as faster and smoother than everyone else, which Shintaro Katsu sort of did in his Zatoichi movies, except Zatoichi’s fakie sword-grip is demonstrably slower and against a skilled opponent it would just have gotten him killed. Hm, I wonder if I should do a posting on “essential samurai movies.”

Speaking of radio drama, the old Mercury Theater radio dramas are available on the ‘net. [mercury] When I was a kid, I listened to them. My dad had recordings (on reel to reel tape, no less) and I loved them. And if you like radio drama, Lindsey Graham’s 1865 is terrific: it’s a radio drama about Lincoln’s assassination and the politics around it, with some really top-shelf acting and audio foley. [1865] I guess the best thing I can say about that is I got my dad hooked on it, and he’s a historian. [US history is not his thing, so much, but he represents a highly critical audience]