Lately I have been playing Subnautica 2.

It’s pretty good. Not as brilliant as the first, and I think it’s just because I’m getting used to the underwater world and its peculiar logic. This version changes things up a bit – the player is in an arctic zone and staying in the water is safe; the surface has nasty weather. 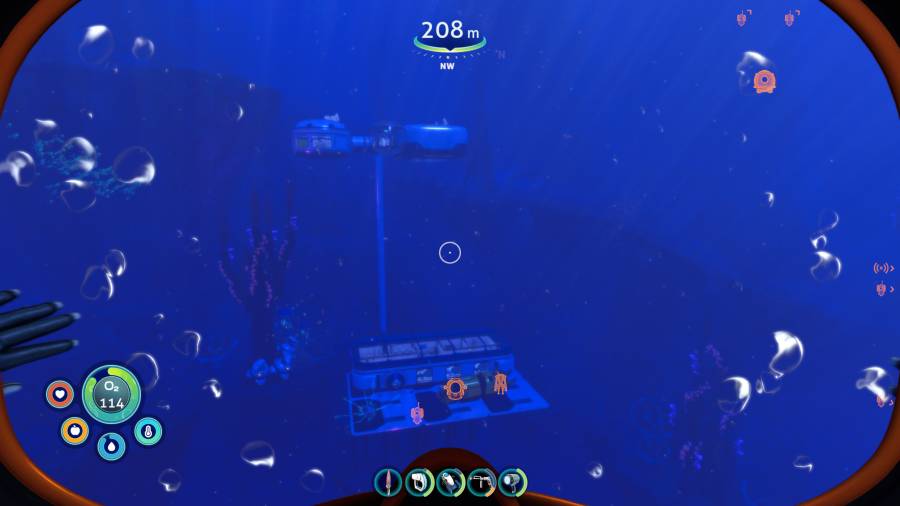 There is the usual panoply of gear, and you have to explore some truly strange and creepy places. There are shipwrecks and weird biomes and things that want to eat you.

They’ve added a few new components you can use for base-building, including the very large room, which can have a translucent ceiling. Naturally, I built a deep base around it, right in an area where there is a large permanently angry thing swimming around trying to eat me. It makes the occasional outside “food run” a bit more exciting.

I’m glad the developers re-visited the world of Subnautica and got some more mileage out of the beautiful engine that they’ve made.

One change that I’m a bit less excited about is that they changed the way/order in which gear is found. You get urged to explore places where the blueprints for new things also turn up, which means that (like Subnautica 1) you don’t get the really cool toys until you’ve dug fairly deep into the plot-line. That gives the whole game the feeling of an endless fetch-quest, which, basically, it is. And the ordering is a bit goofy: you don’t learn the plans for showers and toilets until halfway through the game. And, in the big room, the walls snap to an invisible grid that is large, so it’s hard to make a “little room” unless it’s too small to hold a shower. Other games should have flaws so grave.

There are a few bits that are straight-up cheesy, like a thermos of coffee that can help keep you alive in bitter cold (if you remember it!) and hot peppers that also warm you. I know the scripters know that’s not how hot peppers work.

Otherwise, I continue to love these games. They’re beautiful and sometimes they’re really scary and tense. I got lost in a deep cave system with my ship’s batteries running down and was feeling genuine panic: there was no way I could swim to the surface from there! So I had to think things through and came up with a way of swapping batteries around so I could get a bit more power, and I got out of there and back to my charging station with 2% battery life on the gauge.