Rumsfeld was, simultaneously, a “company man” who saw himself as an enabling gear in the vast power-system of the US empire, and an independent-minded strategist; all in all a recipe for an asshole. 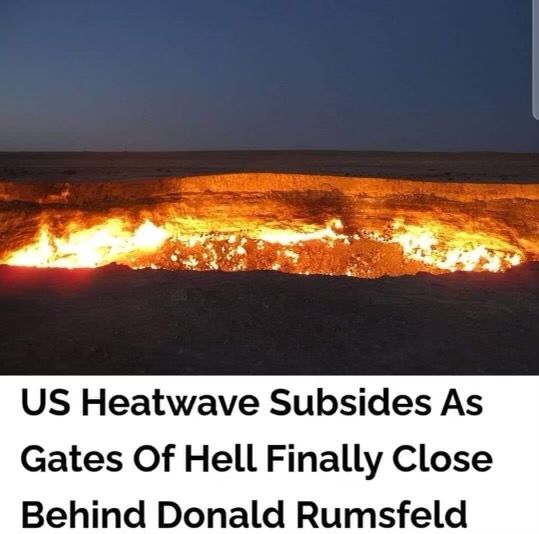 One of his signature accomplishments was the “re-balancing” of the US military, which was bloated and stupid after the Vietnam war. When the US military lost to a bunch of pyjama-wearing insurgents, its response was: “we didn’t have enough gear and people” (which was wrong). Rumsfeld was smart enough to see that it was wrong and created the “Rumsfeld Doctrine” – instead of “you go to war with what you have” Rumsfeld’s strategic genius was “you go to war with just enough to fail.”

Rumsfeld also oversaw the US torture/interrogation program and was notoriously out to lunch when the blame for the Abu Ghraib prison/torture program was being handed out. Not that anyone from the US administration was going to actually have blame splash on them: they had just illegally launched 2 wars of aggression and the US public and Congress’ reaction was loud cheering.

In the end, his life was a pointless waste, that made the world a worse place for his having been here. Don’t let the door hit you on the way out, Rummy.

h/t Anna for the meme.

I watched a few of Rummy’s press conferences when he was SecDef and I thought, at the time, that he was one of the most arrogant human beings I had ever seen. His performances are off the chart. His obvious contempt for journalists, and their desperate, abused-child attempts to mollify him by asking questions he’d like, was one of the moments that made my hatred for militarists crystallize. In terms of his attitude and arrogance, I imagine he was on par with Goering – who was equally incompetent.