Whoever came up with that stupid, cruel, “boil a frog slowly” story? It’s wrong at many levels.

Climate change is no joke, and it’s going to get less and less funny as it sinks in. I’m amazed that it’s not front-page news all the time, except “you are doomed” probably won’t sell any doomed newspapers. There’s also fear of aggressive denialism – the same jackasses who’ll shoot someone who tells them to wear a mask in a pandemic – they’ll shoot people for telling the truth: the water isn’t going to magically come back.

That, by the way, appears to be the attitude that prevails: “this is just a drought and when there are big rains the aquifers will fill back up and we can go back to using drinking water for fracking!” Might as well depend on intercessionary prayer, folks.

Temperatures are hitting 120F in some areas: [guard]

The reporting is from an angle of “people without air conditioning are going to be miserable” and “chances of wildfires increase.” What it doesn’t mention is that California is one of the three sources of agricultural produce for the US. 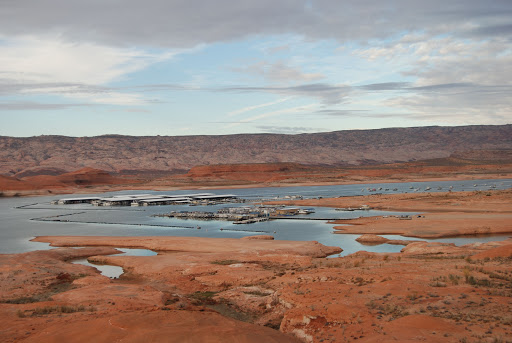 Do an image search for “lake powell water level”

Guess where else is drought? If you guessed “The midwest and Florida” you guessed correctly. Those are the other two main agricultural regions for the country.

Humans’ response, now that it’s thoroughly too late, is to attempt to manage the water supply, as it goes away. [guard]

Valley Water, the county district board that doubles as both policymaker and wholesale water provider in Santa Clara county, called on the cities and companies it serves to cut 15% from their 2019 levels. Much of the cuts focus on curbing outdoor urban water use, which sucks up roughly half of the water distributed to communities and is wasted on lush green lawns or clean cars and driveways.

The numbers are truly terrifying. A pound of almonds takes 1,900 gallons of water. A pound of corn takes 109 gallons. A pound of beef takes about 1,900 gallons. And the snow-pack that fed California’s agricultural miracle: that’s going, going, gone. It won’t be back; the only option humans can come up with now is to squabble over the leftovers.

Probably the only good news in all of this is that eventually someone will suggest we stop having golf courses. 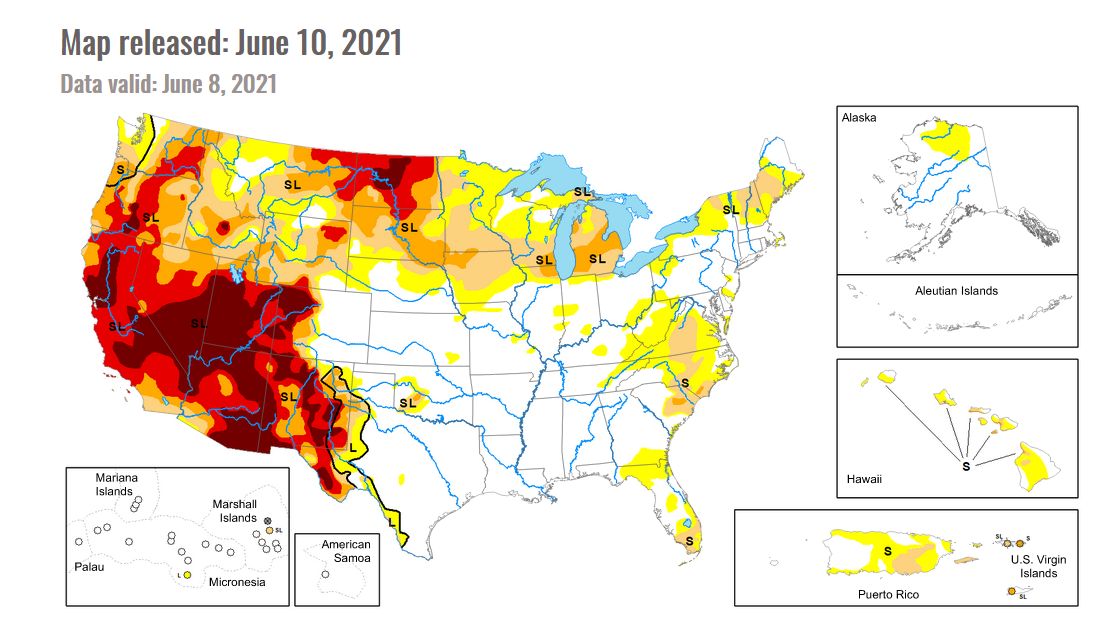 The dark red and ochre areas are extreme drought. The areas that are merely yellow represent “severe drought” Basically, America’s agricultural heart-lands were balanced on a knife-edge and, just like the boffins said, that precarious balance can’t survive even a small shift toward warmer.

Food is going to get more expensive. Then, it will get a lot more expensive. Our desire to reproduce (7 billion and counting!) is going to collide violently with the damage all that CO2 is doing to the environment. Meanwhile, it’s “business as usual” and Biden is careful to say he loves coal and isn’t going to stop fracking, because the US is the New Saudi Arabia. I don’t think he meant that literally, because Saudi Arabia is a fucking desert.

It’s What Science Was » « Little Minions of Vengeance