I’m pretty sure there are people out there who’d say that Fox News isn’t racist. But it’s pretty obvious, when you look at how they report things.

This isn’t just a Fox News problem. It’s an “American Media” problem. Check this out: 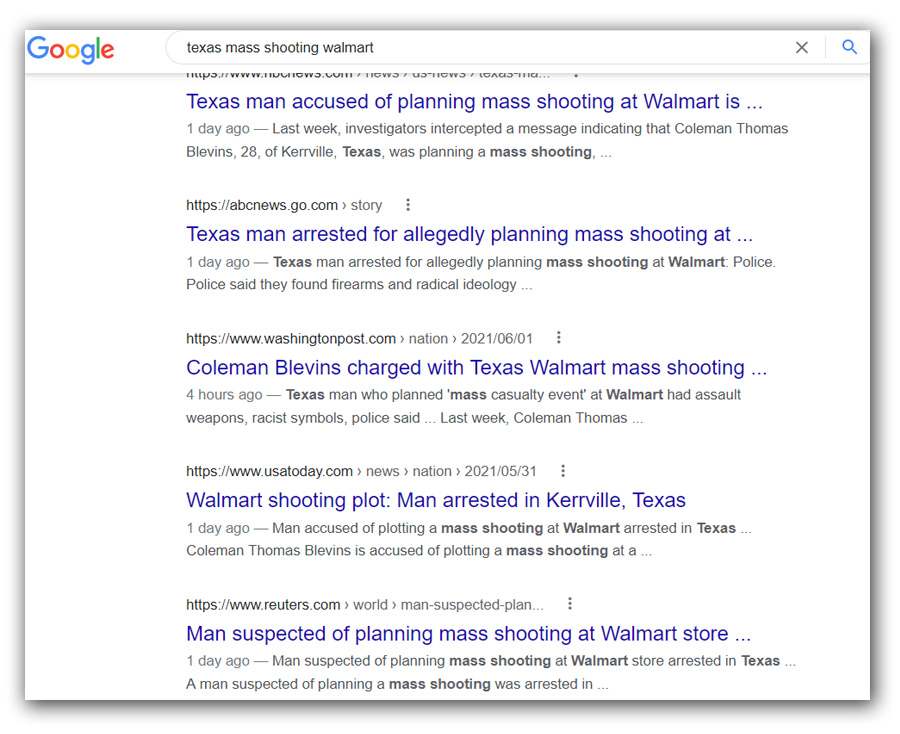 None of them say: “White Supremacist planned mass shooting at Walmart store.” None of them. I think I have seen a few headlines that include the “White Supremacist” bit but there’s way too many headlines downplaying it. Why? The only reason to downplay it is – what – to keep from hurting the feelings of other white supremacists? To keep from making people who want to shoot up Walmarts feel bad about their desires? Why the hand-wringing about how it’s bad to want to shoot up Walmarts, but not pointing out that the guy’s reason for wanting to shoot up Walmart is, sadly, plain old stupid common-or-garden white racism? Do these journalists want to spare white people’s feelings? I think it’s probably a lot of that – white people are uncommonly touchy, especially when someone points out how generally shitty they are toward everyone else when they get their imperialism on.

Then, when you scroll down, you get this [fox] 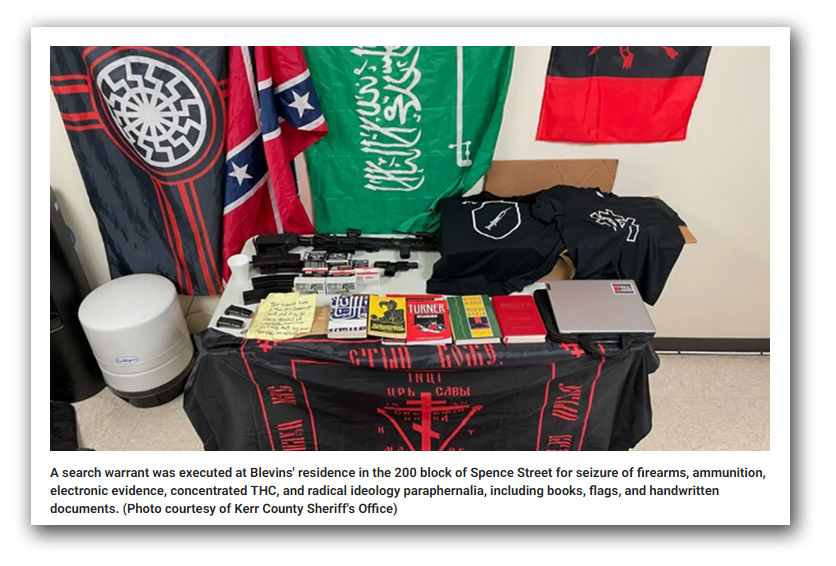 That’s not “radical ideology paraphrenalia” that’s “white supremacist paraphrenalia” – There’s The Turner Diaries, a neo-nazi flag, a confederate flag, a Tshirt with SS runes on it. Yeah, this jackass is a white supremacist/nazi sympathizer. I am completely comfortable saying that, and I’m 100% sure that I’m 100% right about his belief system. I could imagine a skeptical/liberal owning a copy of The Turner Diaries, for example – because they want to do a blog posting about how stupid the book is – but that whole collection sends a different message, entirely. The point is that that collection of symbology is intended to send that message. Our boy, here, is a racist white supremacist who is sporting the plumage of a racist white supremacist because he wants his friends (assuming he has any) to know where he’s coming from.

He did not plan a mass killing at Walmart because he does not like the draperies that they offer – he is telegraphing clearly why he planned a mass killing. Now, that said, he’s an idiot: how does he think that shooting a few people at a Walmart is going to accomplish his great racist/white supremacist goals? What is his great plan? He’s just going to take himself out of the gene pool, and make his fellow racist/white supremacists shake their heads in dismay because even they’re going to realize that he’s just made them look bad.

We should all be able to acknowledge that those aren’t “radical ideology paraphrenalia” – they are a threat indicator. Someone who keeps that shit around them has something wrong with them and they are probably dangerous. Why can’t the news reports say that? These are the self-posted signs of psychological disease.

I’m in favor of free speech, in case some racist/white supremacist wants to jump on here (wouldn’t that be a laugh?) and say that our gomer has a right to that stuff. But we also have a right to say “there’s something wrong with that guy” and the news reports should also be saying that. If they’re not saying that, they are abetting racism and white supremacy by downplaying it. This guy took his racism and white supremacy so seriously that he was apparently planning to go to a Walmart and kill a bunch of complete strangers over it. There’s not just something wrong with the guy – he’s a menace to himself and his society, because of those “radical ideology” beliefs.

What the fuck about this is not obvious?

The US Government has to play a dancy dancy woo woo dance to define “terrorism” in a way that it only applies to Hamas and the Taliban, and not to the CIA and IDF – so it’s hard for the government to talk about “terrorism” in a meaningful way. But everyone else can. And they should also be discussing terrorism from a rational perspective when they write articles about guys like this. In my opinion this guy is not a “terrorist” because he’s not planning or advocating the use of violence and fear to alter a political process. The US is already racist and white supremacist – he was not planning anything that would move a single socio-political dial in any direction, at all. Terrorists seek to perform meaningful acts, and this guy was not planning anything meaningful at all. Perhaps one of the things, here, is that the media ought to also be mentioning that such an act as shooting up a Walmart is ineffective and pointless and that this guy is not a terrorist he’s an “idiot.” But they can’t even bring themselves to call him a white supremacist/racist or terrorist. They’re pussy-footing around even that. And people wonder why we’ve got a problem, here?

By the way, I have a 1st edition of Madison Grant, and also The Lost Cause. Those are “research materials” not radical ideology – I keep a few such books around because I want to look at them and try to understand them. I’ve owned my copy of Grant for 2 years and I owe you all a posting about it, but it doesn’t even make enough sense to dissect and laugh at. It’s a really interesting wad of brain-fart, basically. The Lost Cause is not: it’s one of the most cunning pieces of propaganda I have ever read – it’s just relentless – every aspect of The Civil War is spun and twisted so it’s not the south’s fault and none of it had anything to do with anything like slavery. It’s all the glory of southern arms and stuff. And it’s very dense and long.

A Genius Idea » « An Unsettling Thought For Kids