I never noted down the date when I first lit my forge over at the school building. I think it was about 2 and a half years ago (at the tail end of 6 months of hard work setting up the rest of the shop). But the time has come to move the forge. Which means moving the propane.

I decided to switch from a 100gal horizontal tank to a 100gal vertical one, which is easier to reach for the truck driver who refills it. The company truck came and took the old one away. Today, just as the snow started, the propane guy came back to drop the new one off. I was impressed by how adeptly he handled the crane system – it was controlled with a remote app on his iPhone – he put the tank down exactly 1/4″ from the wall and never touched it. I’m pretty sure I would have ganked the entire wall and perhaps caused a massive explosion. 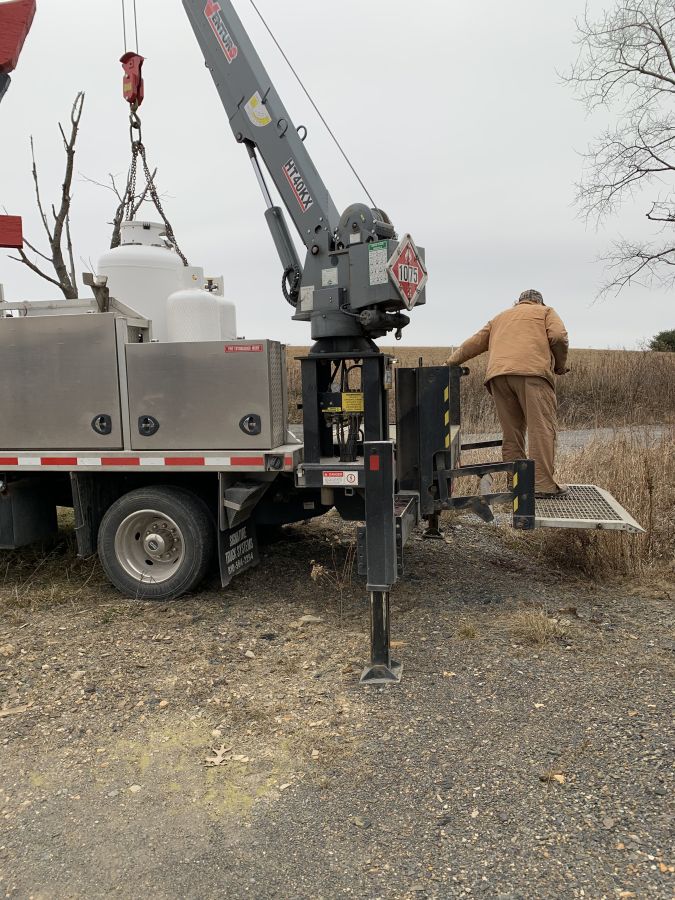 As a fan of fail-crane videos, I appreciate his putting down the extension legs, and otherwise checking the chains twice before applying any lift.

Since I don’t have the necessary lengths of hose to hook the forge up, we settled for getting a copper line into the building, and mounting a ball valve and regulator on the inside. So, there’s a valve outside on the tank and a ball valve inside, as well. If I need to cut the fuel off I can do it in more than one place.

I’ve always been a bit nonplussed by how gas tank hookups are often a kludge of adapters and various diameters of whatnot. There’s some 1/4″ copper hose and some 1/2″ black pipe and then some more 1/4″ threaded connectors. My plan is to disconnect the hose that goes to the forge and replace the hose connection with a high pressure (for air) quick release. I like the idea of being able to take the whole thing off if I need to; that will also allow me to rig up a longer hose that I can connect on the quick release, run outside, and hook to the vertical smelter I hope to build eventually. 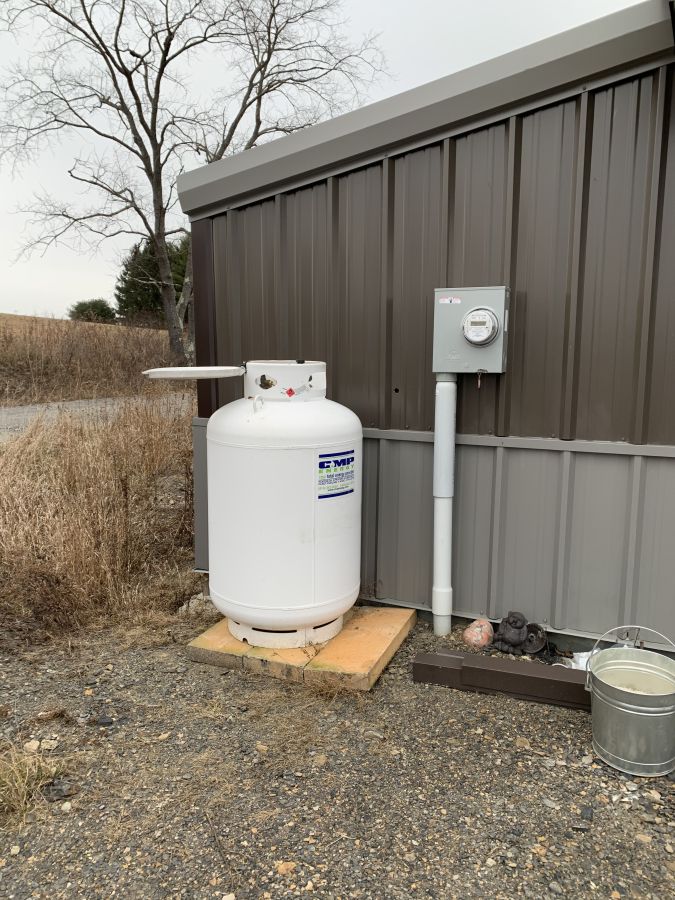 A thing I learned today is that hoses go bad if they’re someplace where the connectors get thermal cycled. It never was an issue over at the other building (or the new one, for that matter) because I turn the fuel off at the highest ball valve upstream, and drain the line below it. So it doesn’t matter if there’s a leak – but the idea of a “leaky propane line” should not be a comfortable idea for anyone. I’m going to keep a little spray bottle of soapy water near the ball valve and I’ll check the line out every couple months. The propane guy hooked everything up, brought up the pressure, sprayed the connections with the water, and one of them started to bubble madly. It was the one closest to the burner, which would make sense since it got the most heat/cool cycles. Lesson learned.

Now, my shop is shut down. I’m going to have to set up a forge (the old chili forge I have is not very good anymore) and get the back side of the building closed – the doors are partially constructed at this time – and run the electricity. I’ve got a call in to Ken, the rigger with the crane truck, who will move the 16t press from the old shop.

All knife-making activity is on pause for now, while I finish setting up the new shop. It needs to be done. I have all winter. Some sort of forge-lighting ceremony will happen, hopefully in mid January when it’s suitably cold.

I’m a little embarrassed to mention this, but I nearly blew myself up the other day. I had been shutting down the forge and was interrupted by a phone call after I had turned the fuel off at the main ball valve. Normally, I would have then closed the ball valves and venturis at the burners, but I just closed the venturis and then got distracted. So, when I went to light the forge (monday, its last firing for the duration) I turned on the main ball valve, then walked the 5 feet to the forge, put my little piezo-ignition propane torch in the opening and turned it on, as I do – so I could open the ball valves at the burners, as I do. Instead, the forge blew up. Because when I opened the main ball valve and turned the pressure up to 12psi, it was dumping propane into the forge. Fortunately the venturis were shut so the forge mostly contained a propane-rich atmosphere without much oxygen mixed into it.

“Live and learn” I suppose. The traditional way of lighting a forge is to put a paper towel in it and light the paper towel, then do whatever you usually do to open the gas lines. If I had done things the traditional way, I would have been surprised when the forge started roaring, but that would have been better than an explosion. It was a minor explosion – the forge jumped back a ways, and blew the backstop about 5 feet across the floor. The mounting for the burner was bent a bit and one of the spots where the welding on the forge was oxidizing is now blown open.

I’m going to be more careful in the future, and I’ve acquired a fondness for the traditional forge-lighting procedure. These things help keep one humble.