I’m kind of a nexus of weird among a largeish circle of computer security people, photographers and artists, and bladesmiths. That means that when something comes along that is a bit off the beaten track, there’s a good chance it gets forwarded to me. This little gem hit my in-box yesterday afternoon and I’m still playing with it and scratching my head.

I’ll make a few comments about it and I’ll offer my opinion and some thoughts at the end, if you’re concerned about spoilers just read down to the divider. The comment section is open for spoilers, so fire away; I’d like to hear your thoughts on this stuff.

And then we come to the next question: “what is it?” I’m not really sure. On the surface it resembles a text dungeon (think Zork or Wump) crossed with a lucid dream. There is no actual pre-scripted dungeon – it’s backended with an AI (or an army of nerds chained to chairs in some underground warehouse somewhere) that takes what you say, and uses it with you to build a cooperative narrative of sorts. From some brief play, I assume that it has been trained with a massive amount of fiction, and it’s looking for patterns in your actions and throwing them back at you. [Experiment I want to do: call my character “Mack Bolan” and see if that affects the output] It feels like a trope-a-matic: a zombie comes into the room and you hide: it immediately takes that in stride.

One other thing: it supports multiplayer. I tested it with a friend and it’s really trippy – you have multiple people yelling out what they are doing and the AI builds a narrative out of the whole mess. If that sounds like a high school D&D session circa 1980, that’s exactly right. There are huge potentials in the multi-player mode, however. For example, imagine if one player was using press questions from a presidential press conference, and another was answering with Trump’s actual answers. What would happen?

The AI also allows you to inject “hints” in the starting game. The hints are in the form of statements, i.e.: “Trump does not know it but he has been replaced with a robot. He is not human but he thinks he is.” That would appear to be a pretty complicated bit of input to parse correctly, but the AI (or the nerd meat cloud in the warehouse) does a good job of it. I have to admit I am skeptical about this whole thing, and I wonder if it’s just a chat connection to some weird person who types very fast. By the way, you can adjust the length of the pieces of narrative the AI throws back at you, and the delay, so it would be hard (I think) for someone to by creating this stuff and throwing it back at you in real time.

Let’s have a look at some of it: 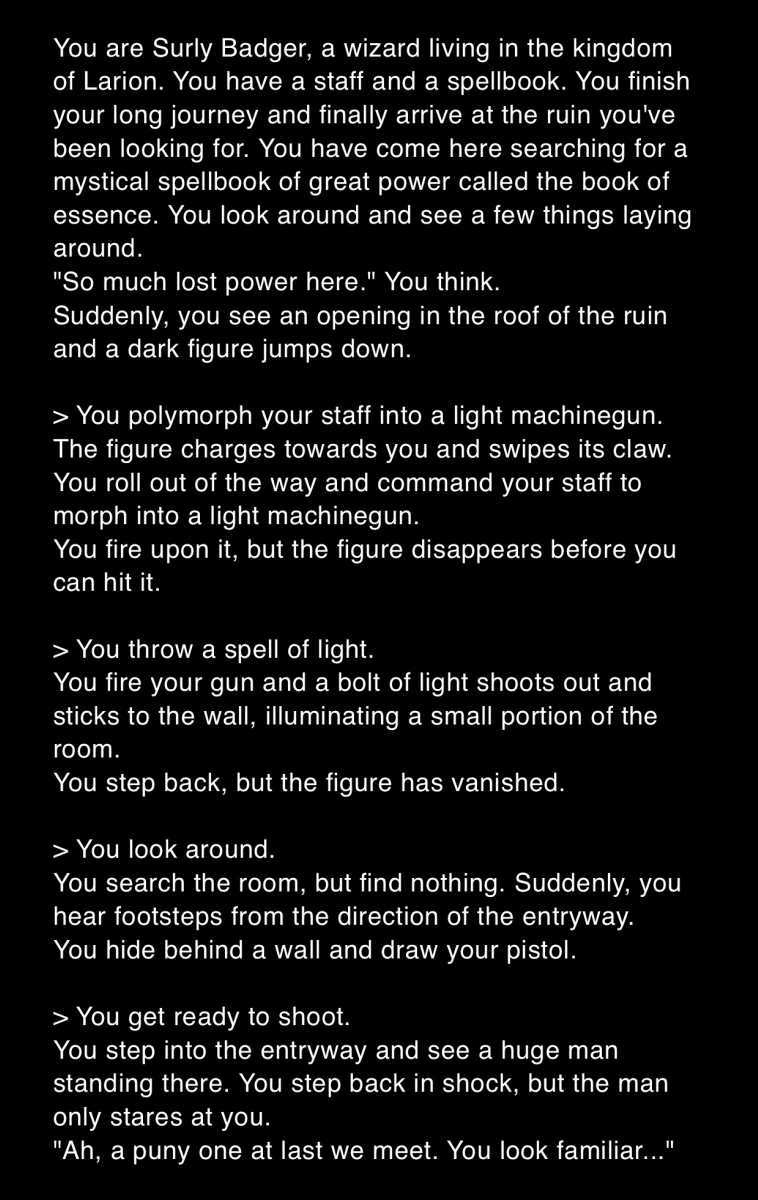 The first paragraph was generated by asking a few questions: what is your name, what is your quest, what is your favorite color, etc. Then it drops into an interface that looks a lot like Zork. I was immediately in love. What’s also cool: it re-writes what you say. My first command was “polymorph my staff into a light machine gun.”

Well, it appears to have ‘understood’ that well enough.

You can see a continuity error where it refers to my light machine gun as a “pistol” but I’m still impressed because it appears to ‘remember’ that I have a gun. We’ll see more of that in a bit, because the AI’s ‘memory’ is the part I find particularly cool: unlike most random quests in role-playing games, there’s a sense of continuity that results from the AI ‘remembering’ what I said and did. Sort of.

More technical stuff: at the bottom of your screen is a toolbar. You can “undo” and “redo” actions, as well as editing the “hints” file.

If you don’t like how the engine interpreted a particular input, you can just hit the “reload” button and various weird things will happen. Or, you can just try to re-direct the story from within, which is where it starts to feel like a lucid dream. 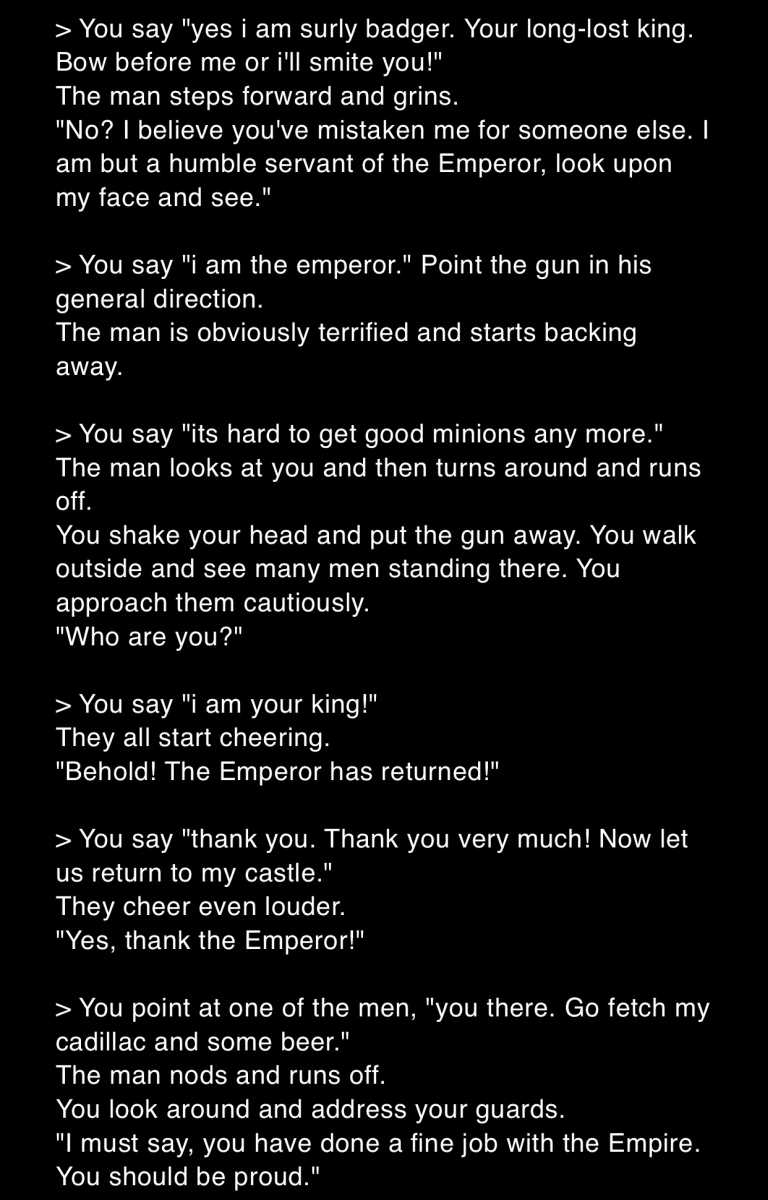 See what I mean about the lucid dream feeling this game has? You can stretch the story in the direction you want, and it’ll maybe resist a bit but you can drag it in that direction by triggering those pathways over and over.

I’m also pretty impressed with its parsing (?is it even parsing?) of my natural language inputs, and it does an impressive job with the outputs, as well. If this is really an AI and not a warehouse of captive nerds, I think we’re looking at a pretty impressive leap. If this is not a prank, then I’m sure there are other systems like this out there – I just haven’t heard of them. It seems to me to be inevitable that someone will hook something like this into a quest-based role-playing game and then you’ve got some of the sort of things that Fable promised. I played Fable and was profoundly disappointed.

Continuing with my imperial ambitions: 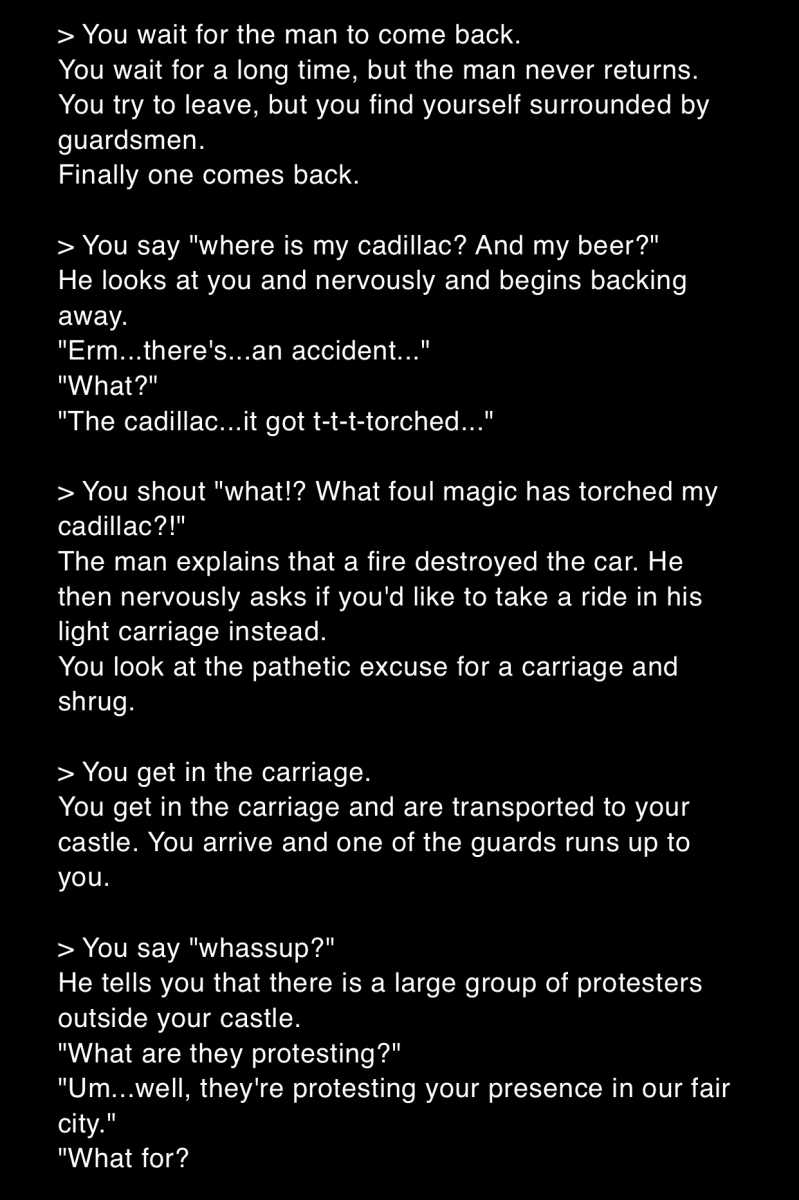 It’s hard to get good minions, isn’t it?

Protests!? They are protesting?! Me?!

I didn’t make any of that up. My order was: “bring the protesters beer and pizza and maybe they will stop protesting.” The rest of that text was the warehouse full of captive nerds typing away as fast as they could.

It does illustrate my amazing political skills, as emperor, I think I’m not bad really. But I need better minions who won’t torch a perfectly good cadillac.

Now, what do I think?

It was really fun, at first, but then I realized that I was just punching at ghosts. There’s no point to the story and it never ends. I could wallow all day in my imperial ambitions of beer and pizza and the AI would lead me on endlessly. It made me realize that a quest has to have a stopping-point; a goal or a destination. “If you don’t know where you’re going, how do you know when you get there?” I could just as easily sit back, with a beer and some pizza, and imagine being emperor. Sure, my cadillac would not have been torched, but – I guess I don’t see a point to the exercise. And, that’s what got me stuck: I don’t see a point to this, unless someone used it in such a way as to give it purpose and meaning (to me) i.e.: if a couple of people decided to use it to riff on a scene from Life of Brian that’d be interesting – but the interestingness would have to do with the goal-driven behavior of the people playing the game. The AI is injecting noise and producing text and, um, so what?

The whole thing became an interesting musing-ground for what I want in a story-driven game: a story. Recently, I finished Horizon Zero Dawn and was seriously impressed with the game because of the way they had an overall (interesting) story arc, into which they fitted a lot of side-events. The story arc had all of the elements of a good story: introduction, development of character(s), conflict and challenges against the protagonist, discovery of a sense of purpose, and resolution. The AI story generator is not there, yet, and it’s not trying to be – it’s showing what can be done with the technology and where it’s going. Hook this thing into a holodeck and you have a recipe for “I don’t know, he’s been in there for 2 months.” It makes me think about what is satisfying. In the AI story teller, it was a bit too easy to become emperor. But maybe that is realistic, as well.