Perhaps some of you know what’s going on with this; I’m mystified.

Most of the patina’ing (patination?) that knifemakers do is based on creating rust on a blade (Fe3O3) and controlling it so that the iron oxide turns to magnetite (Fe3O4). The magnetite is hard and fairly durable, and it’s a lovely dark color. Maybe there are some people in the world who swoon over the color of plain old rust, but not on a blade.

Parkerizing steel, and various other ‘bluing’ techniques has a huge history going way back – there are scads of techniques for bluing steel ranging from reactions involving copper oxide to straight up painting it with polyurethane and pigment.

The current thing, though, is soaking it in instant coffee. (or as we bladesmiths call it, ‘covfefe’) And, as skeptical as I originally was, it appears to work. 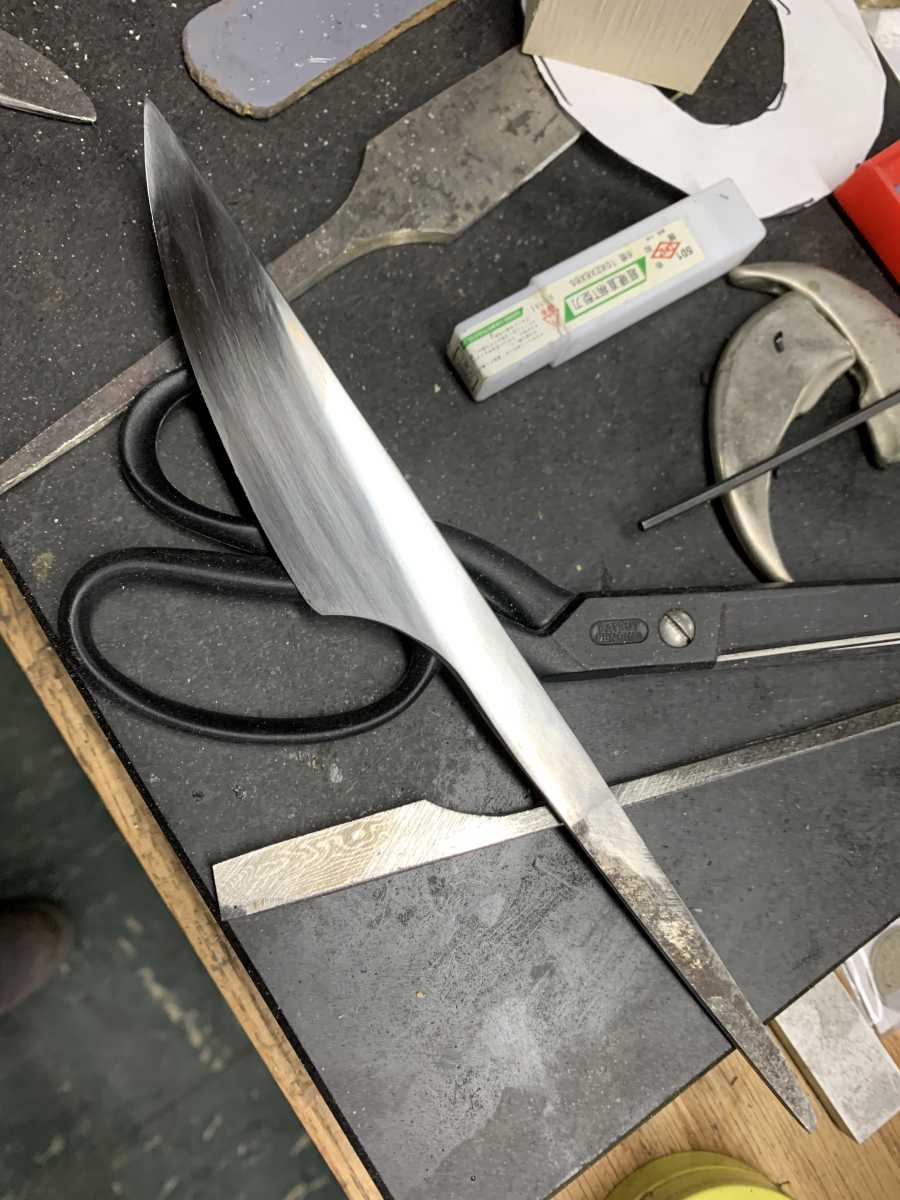 This is a blade I’ve been noodling with, and it’s polished up to about 800 grit. The blade is laminated wrought iron and 1095 high carbon steel. If you give it the ‘usual’ treatment by soaking it in ferric chloride, the acid attacks the wrought iron differently from the 1095, and that makes the weld pattern emerge. You can see what that etch does on the small spatula-like thing at the bottom of the picture. 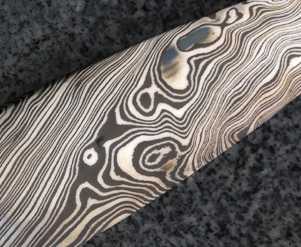 Usually, a soak in dilute ferrous chloride makes the pattern pop out in about 5-10 minutes. The current state of knife-making is to use steel that is close to ‘stainless’ like 15N20 that has a lot of nickel in it and resists the chloride fairly well, laminated with something that’s basically pure carbon steel (with some manganese) like 1095. I believe I understand what’s going on there is that the manganese in the 1095 reacts with the acid and produces a layer of Fe3O4. That makes the 1095 turn black(ish) and the 15N20 stays silver(y). The small picture is a piece from a work-in-progress, comprising of 200 layers of 1095 and 15N20 that were folded and twisted, and it was then soaked in ferric chloride and soaked overnight in Folgers instant coffee.

Roughly, it seems as though the coffee brings out the contrast so it’s about twice as contrasty as just the ferric chloride. So, I’m thinking there’s got to be something in the coffee that is staining the Fe3O4 magnetite darker. But, what? It’s permanent, too – or, at least, “fairly durable.”

This is what happens when the wrought iron/1095 knife is etched in ferric chloride and then spends the night soaking in Folgers: 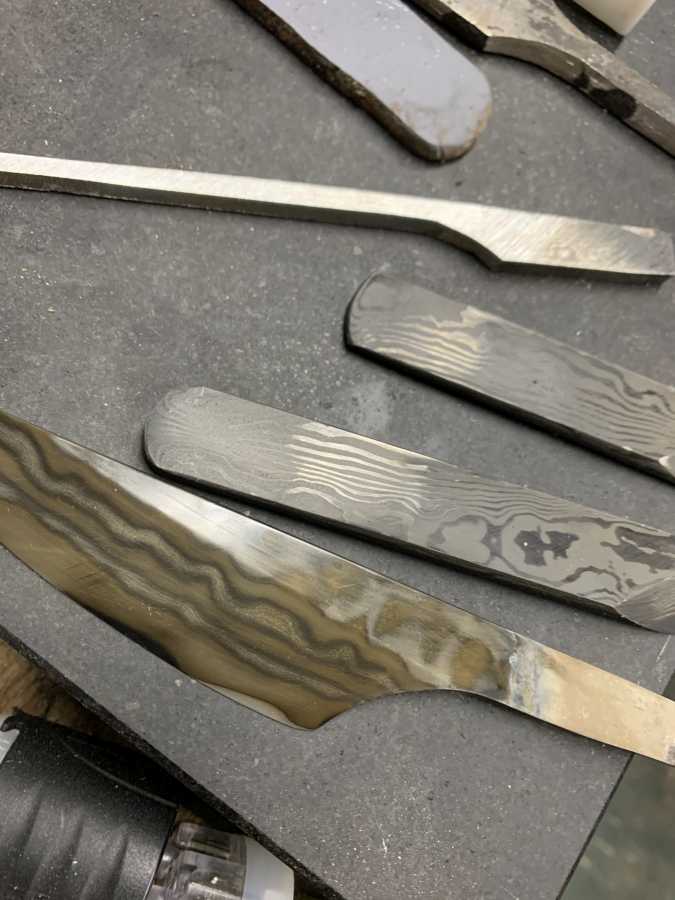 The little kiridashi blades in the middle of the photo are 1095/15N20, and the lower one is wrought iron/1095. What’s weird about that is the way the 1095 (which comes out nearly black in the kiridashi knives) gets a brownish/lemony tone and the wrought iron stays bright(er).

I assume that there has to be some electrochemical thing going on here and that somehow the different reactions are being driven by ionization from the metal and impurities being dissolved. If you look at a blade with wrought iron in it, while it’s soaking in the ferric chloride, bubbles (hydrogen?) form on the bands of wrought iron – it’s apparently getting attacked/dissolved/converted more successfully than the 1095. “Who knows?” what’s in wrought iron. Back in those days it was slag and iron in a great big puddle and the slag was mostly consisting of various silicon oxides.

I’m mostly just rambling here – I don’t expect to ever fully understand what is going on in these reactions. But I feel as though someone who understands the physical chemistry (is this a job for P.Chem?) better ought to be able to look at a few of the popular knife steel formulations and think up some ways to process them that would affect them visually.

The other question I have is “what in the heck made some knife-maker think ‘maybe if I soak it in Folgers overnight?'” and actually try it.

I Admit I Had Not Considered This Important Issue » « Soothing