In case you didn’t realize it, the stock market is a scam. One of the worst and scammiest things about it is that it’s been arranged so that your money becomes worth less, if you don’t invest in it: so you gotta play, and the game is rigged.

It’s rigged for and by the winners, of course. The biggest winners are the investment banks that “make a market” in a particular stock – they do nothing except move a number from one ledger to another and charge a fee for doing it. It’s a great business: if you win, they win too and if you lose, they still win! And, of course, whoever has some advantageous knowledge can trade ahead of the market – i.e.: “insider trading”, but it also could be espionage or brilliant market analysis. The main trick is to start with a large amount of money and then you can work the market better. If I have $100 and increase its value 40% I have $140, but if I have $1 million and do the same thing, I just pocketed enough for another nice house.

Sometimes there are genuine visionaries who time a market well; I remember one guy who had about $1 million and shorted the real estate market in the fall of 2007. He tripled his money when the market fell, then bought: real estate, and rode it back up, tripling his money again. That’s just a couple trades; a very valuable activity to society, so he was duly rewarded with $9 million over the course of 4 years. If he’d started with $100, he’d have wound up with just under $1000. Big fucking deal.

But you gotta start small to get big, unless you’re lucky enough to be born with a platinum spoon in your mouth. You have to pry that platinum spoon out of some other guy’s mouth, by being in the market ahead of them. See, when someone has inside information, they’re stealing from the people who are doing transactions with them: it’s exactly the same as if I sell you a Lamborghini for $500,000 (what a deal!) except I know its transmission is on its last legs and you don’t. (Differential information is money in capitalism) So, here’s what’s going on in Washington: everyone is trading ahead of the market. Because they have information and Washington is a gossip-fest. You start out a lowly peon working for some senator and, if you can double your portfolio every year through careful insider trading, you’ll wind up an oligarch like your boss. Unless you go for a bigger table-stake by doing some outright graft like using some of your campaign money as table-stakes, which is great as long as the market goes up.

So you get things like small-time grifter representative Susan Davis (D-Calif) who unloaded “thousands of dollars” of Royal Caribbean Cruises shares when she first got the briefing about the coronavirus. Here is the kind of investment genius that Warren Buffet does not envy (because he does his research and probably figured out years ago that cruise lines were a bad investment) 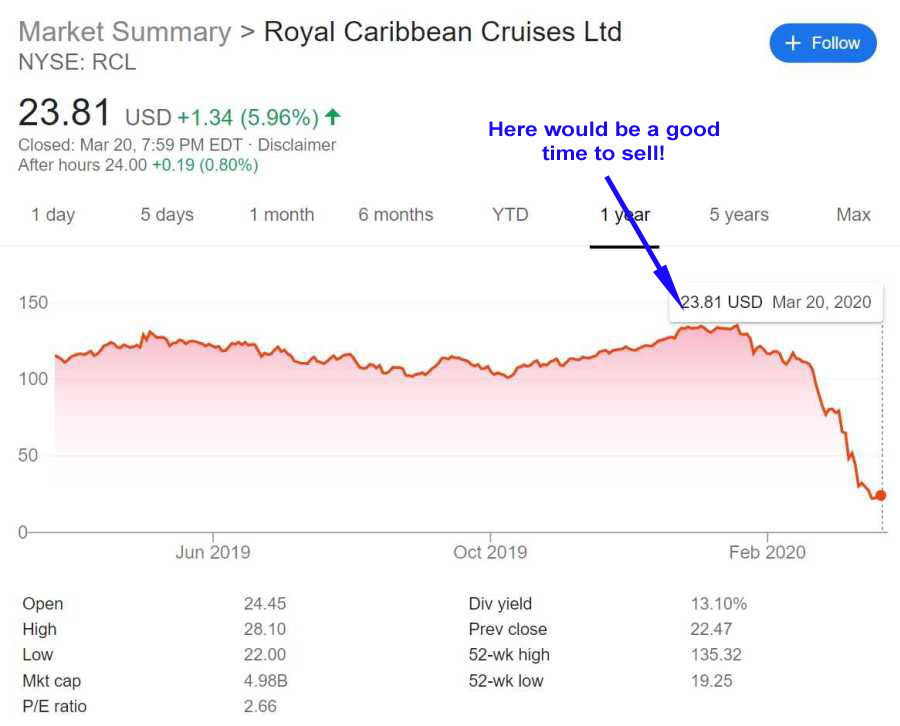 Let’s say you have 50 shares and you sell them at 130 – near the peak: that’s $6,500. If you held onto them a week longer, then you’d get $1,150. That’s such a big move that you can see how it’d make a real difference in someone’s pocket. Especially if they got out with the $6,500 and invested in something that would go up in the event of a pandemic. Like “a senior aide” to Mich McConnell who invested in Moderna stock in January. 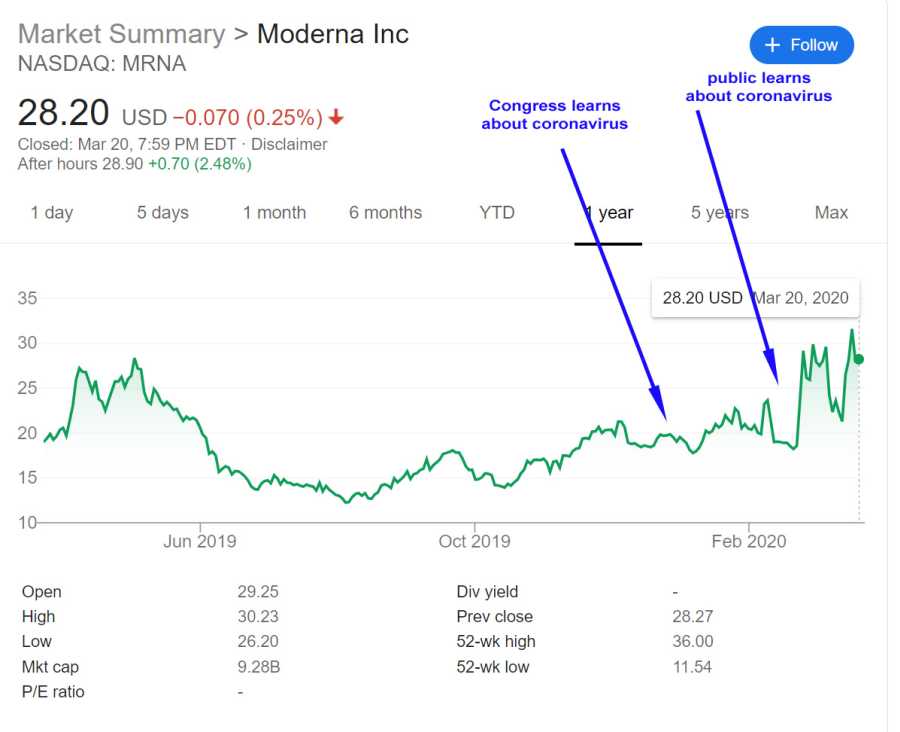 Moderna is one of the companies researching generalized flu/corona virus vaccines. Between January and now their stock is up about 70%. So, if you were the same congressperson who pocketed the $6,500 when you bounced out of the Royal Caribbean Cruise company stock, and you invested the $6,500 in Moderna, you’re now sitting on $11,000 or so. That’s pretty good “making lemonade out of lemons” since just January – our little portfolio is nearly double what it was a few months ago. If you can keep up that rate of return for a few years, you’ll be as rich as Nancy Pelosi! [Pelosi made her money in real estate, which is a great investment for people who already have money; you still get rent even in a crisis and, while your property values fluctuate they tend to fluctuate up if you’re smart enough not to buy properties in Miami. Although there are speculators buying properties in Miami because they think they can pick them up cheap, then line up for a bail-out when the water goes over them. Oh, and Pelosi got started on the path to wealth the traditional way: she inherited it.

Cause and effect: heritable wealth -> oligarchs.

But the absolute creamiest situation is to be one of the people who controls government’s response to crises (or even creates crises) and you’re able to trade ahead of the market on it. That’s like giving these people a license to print money. It’s OK though, there are no sleazebags in congress, right?