Let me encourage you to do something odd.

I’m 57 now and I sometimes forget things. We tend towards dementia in my gene-line, so I worry that some day my memories may begin to shred and blow away and I’ll have to rely on what other people remember of me; that’s why, in 1991, I started getting serious with a camera, and have been snapping away cheerfully ever since. I’m not particularly worried (because: worrying does not help at all) but I’ve always supposed that if things came to it, I might wind up in a rocking chair someplace, rummaging through an archive of photographs, clutching the straws of my life close to me at the end. In the last decade I’ve lost a few important people out of my life, and none of them – not one – has said on their death-bed, “I wish I had spent more time in Marketing status meetings.”

If the existentialists are right about anything, it’s that we are what we do. Which means that what we’ve been is what we’ve done. As a nihilist, I am unconvinced that there is any “meaning” – define that as you will, since I am rejecting the term – to life; but if there is any, it’s the things that we feel are important to us. In other words, the “meaning of life” is a personal experience, to me. You will, naturally, have a different meaning. But the meaning of my life is the things I have made with my hands, software I have written, businesses I have built, problems I have solved, people I have known, kisses I have shared, food I’ve cooked, museums I have wandered through while holding hands and commenting on the art – thousands and thousands of bits of meaning, fractally detailed, and easy enough to forget. 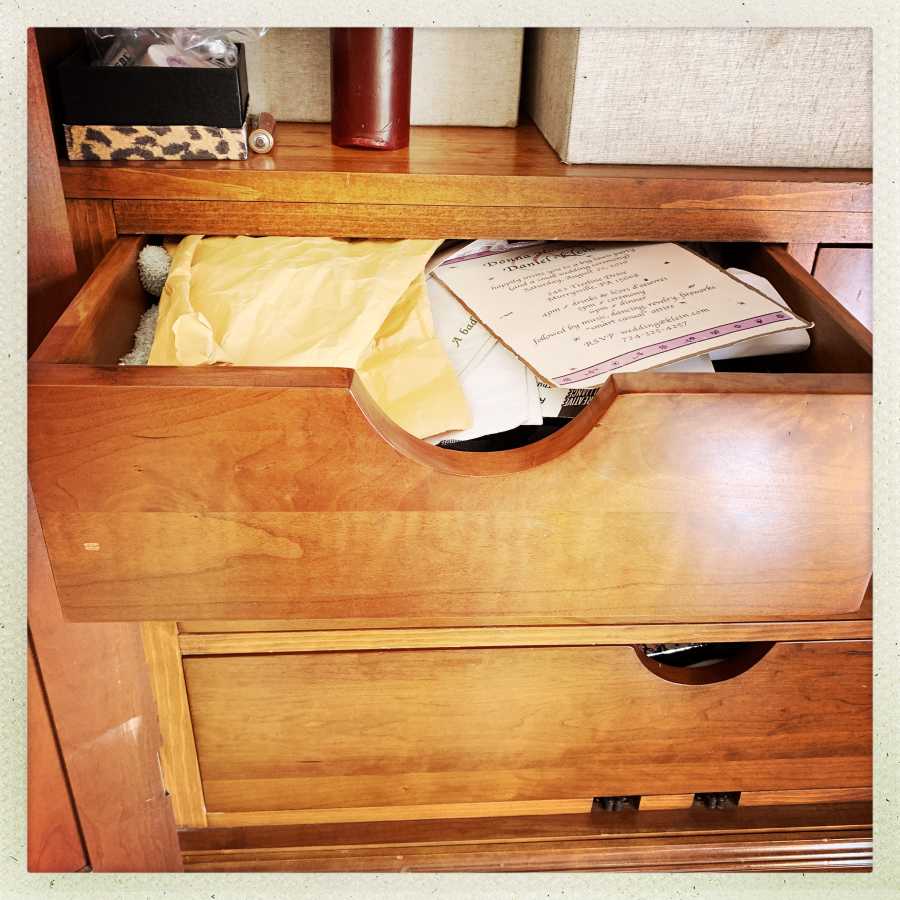 That is my memory drawer. Things that remind me of moments that I never want to lose; they’re all jammed in there with no organization (I consider that a metaphor for life) – I sometimes pull the drawer out and rummage through it. As I do so, memories cascade through me and even the bad ones are good, since they are what gives form, shape, and meaning to my life. Everything is recognizable, immediately: see the blue fuzzy thing on the left? That was my puppy’s toy when I got him from his mama. Oh, and right on top is the invitation to Dan and Donna’s wedding! Just to the left (the piece of paper saying only ‘A bad’ but otherwise hidden) is the programme from a concert in a park in San Diego that Click Hamilton put on when I came to visit; he had a local violin prodigy come and play and the whole park shut down and gathered around while he played and riffed on Mendelssohn’s violin concerto. Ooh, and peeking out from under that is a ticket from a gallery show I attended. If I dig down, it’s also full of objects: dog collars, a resin memento Gilliell made when Caine died, a thing I was making for someone else who died, first (note to self: work faster, sometimes!)

Those memory objects would mean nothing to you or anyone else and most of the other people who helped create those memories have moved on, died, or forgotten them themselves. If you were to go through it, you’d think it was a drawer full of junk, which is, perhaps, the point.

One of my projects in the next couple years is to build a wooden chest for the memories, instead of just jamming them into the drawer – some kind of wood that will burn easily. Because there is a codicil in my will that it’ll all go on a bonfire when I’m out of the Marcus business. That’s not because my memory drawer is like Jeffrey Epstein’s, it’s just that I don’t want to put anyone else in the position of having to decide what to do with any of it. By the way, you should also think about having a codicil in your will for the disposal or preservation of your data. I’m a data packrat; I have every email I’ve sent or received since 1984, and tons of digital photos and video clips. Some of that stuff has been interesting in various patent litigations, but by the time I’m gone, I think it’s OK to have all of that go, as well. The executor of my estate has a directive to destroy all hard drives in my office; I keep thinking about encrypting them (so the key goes with me!) but if the whole idea of this exercise is “what if I start to forget?” that might be a bad strategy. The point, again, is that these things mean stuff to me and when I’m gone they ought not to mean a whole lot to anyone else.

My memories touch other people, of course – but I feel that it’s their problem to remember what they want to remember, in their own way. I had an experience with that, once, where I sat down with my first true-love and we looked at some of our old letters. Because I have those, of course. We stopped pretty quickly because we’re cynical and worldly, now, and the thoughts of those callow youth have become alien to us. It made me wonder what then-Marcus would say if I could have come back through a time-machine and said, “Hey, that nuclear war you worry about all the time? We’re going to strangle in carbon dioxide, instead. Enjoy the day.”

That’s what I’d like to encourage you to do: remember the things that shape you; keep fragments somewhere where you can tangibly rummage through them, just like you rummage through them metaphorically. It doesn’t have to be a nice box, or a fancy drawer – but I guarantee you there’ll be stuff that you’ll miss when it’s gone. There’s an art, in fact, to coming up with things that will symbolize an event to you – for example, that USENIX conference badge from the early 90s: that was my first conference presentation. I could have included the viewgraphs from my powerpoint deck but the badge works just as well. Think about it: you’re compressing yourself.

My memory drawer only goes back 15 years. I didn’t have the idea until much later than I should have. It happened when my aunt, my favorite little old lady, went to the hospital for a minor procedure and never came back. My cousin, distraught, called me up and said, “What do I do with all this stuff?! The house is full of half-finished projects and things I don’t even understand. What do I do with this?” That was when I reached down into some profound well of bullshit and said “The meaning of those things died with her. I suggest you pick one or two things from the house that are meaningful to you and call an estate agent to get rid of the rest. It’s not disrespectful; it’s what happens to everyone.” That evening, after we talked, I thought hard about existentialism and gained a new appreciation for Camus. The first thing that went in the memory drawer is the length of black ribbon I used to tie my hair back at the funeral. Not all memories are happy, but that one serves as a stand-in for the whole arc of my time knowing her. Besides, none of it matters to anyone but the two of us anymore, and she’s done caring.

I’d like to end this on an upbeat note but I don’t think that’s possible when what I’m talking about is our reaction in the face of loss and meaninglessness. If you’re a cynic like me, who takes a dark view of everything, every happiness is tinged with the black velvet lining of eventual loss. When I confront that, I remember that none of it matters: when we’re gone we exist briefly as a ghost in other people’s memories and eventually we fray, wisp, and blow away. If you were a great person, that’s how it will happen. If you were a piece of shit, that will happen, too. In either case, you’re a custodian of your memories – so don’t lose them, and don’t forget to spare a thought now and then and wonder if other people’s memories of you will be sweet, nurturing, provocative, interesting, or whatever. That’s what the existentialsts got right. The nihilists appear to me to be right, that there’s no meaning and it’s all a sort of cosmic joke – but that doesn’t mean that we can’t take the joke seriously when it applies to our personal memories.

Thanks for being here.