The Guardian has a thought-provoking article about the race to develop a replacement for Viagra. [guard]

I could probably stop there, but the article interests me: its premise is that a replacement for Viagra is needed. Naturally, a better drug for to help people deal with erectile dysfunction is a good thing, but better is not the point:

However, this will soon come to an end, as in 2020, Pfizer’s remaining patents on Viagra expire for good. A whole host of generic versions have emerged in the past six years, often in quirky forms such as mint strips or breath sprays, as Pfizer’s grip on the rights to the drug has slowly loosened. Soon, these are expected to flood the market, as manufacturers jostle for a slice of the pie.

Ohhhh, so what’s needed is not a better drug for patient outcomes. What’s needed is a better market control vehicle. Because Pfizer wants to monetize all those boners and unless they are able to corner the market, they’re going to stop making gigantic numbers of billions of dollars and will settle down to making mere handfuls of billions.

It’s interesting how The Guardian suddenly reads as though it’s copy/pasting a bunch of talking points from a Pfizer press release:

This will make Viagra more accessible and cheaper, but for the millions of men worldwide with erectile dysfunction, it could also spell good news in the form of much needed treatment innovations.

The need for better treatments is particularly pressing as erectile dysfunction appears to be getting more common, with the global prevalence set to pass 300 million by the middle of the next decade. Scientists have long argued about whether this is simply due to men becoming more open in reporting their problems, or a by-product of other health problems. One thing is clear: the market is growing.

Why is that might be a good thing to research. What if it’s a behavioral problem? Perhaps global climate catastrophe is making men limp? Perhaps its the ever-popular blame-catchers: comic books, video games, or marijuana. Or, perhaps whoever did that survey included reported instances of “erectile dysfunction” due to alcohol – a well-known problem since the dawn of recorded history. There’s another problem: perhaps “erectile dysfunction” means that you expect to be able to have a boner any time you want it, and if that doesn’t happen, something is wrong with the world. Is what’s measured “erectile dysfunction” or entitlement?

There’s a deeper fallacy in all of this: Pfizer is saying “the market for erectile dysfunction medicine keeps growing” at the same time as they are saying “we keep expanding that market!” Well, yes! Maybe one of the reasons that 300 million people have requested medication for erectile dysfunction is because Pfizer has been advertising “erections on demand, never mind the increased risk of stroke or heart attack!” Maybe there’s a connection, there. I’m just being a skeptic, I can’t help myself sometimes.

Here’s another question that would be interesting to research: if they are using prescription rates as a proxy for actual cases of erectile dysfunction then what the hell is going on in Massachussets, New York, Connecticut, and Rhode Island? Is it something in the water? Alex Jones needs to get on this: East Coast Liberal Elites have “man problems”, apparently. 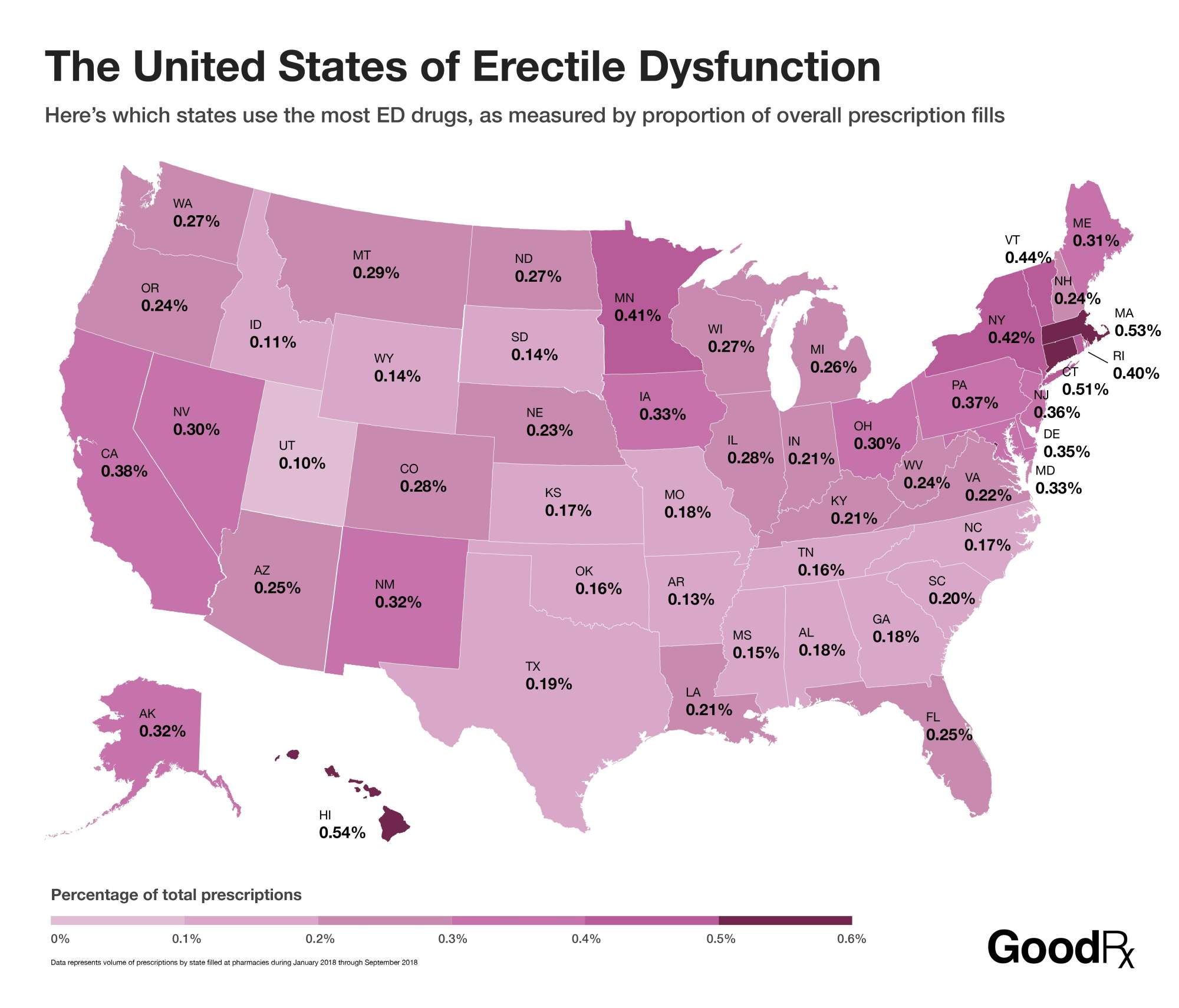 I recall reading somewhere that Saudi Arabia is a huge market for Viagra. Perhaps the drug’s sales are a statistical proxy for toxic masculinity/patriarchy. [I believe those terms are redundant]

While a handful of pharma companies have attempted and failed to get rival drugs into the clinic, the sheer scale of the Viagra profit machine created a monopoly, with most companies shying away from the challenge, perceiving it as too much of a risk.

Sounds like more of capitalism making markets better. But they’re not serving the customer. Please stop pretending to care.

The article goes on at some length, repeatedly making the point that none of the current approaches help for people with nerve damage. I had a friend with mesothelioma that had that happen: the chemo/radiation they put him through wiped out the nerves from his brain to his nether regions, and that was that. Unfortunately, for patients in his situation, they’re not a big enough market that will return the kind of paybacks that Viagra did, so capitalism says “tough luck on that one, mate!” and runs off searching for the next gigantic revenue pipeline.

I used to know a guy who took Viagra and Ecstacy, because apparently it gives a great big rush. I guess cocaine and amyl nitrate aren’t hip anymore. But that shit messed him up; he used to be bright and sharp and quick and now he’s a shambling mess titrating himself out of serotonin syndrome with various antidepressants. He’s Pfizer’s target customer, in other words.

Get Hard and Stay Hard » « Monday Meslier: 118 – The Deist’s God Is No Less Contradictory, No Less Fanciful, Than The Theologian’s God