I’ve been tracking this story since it began, and now it appears to have ended. Big surprise. [stderr][stderr] The US justice system seldom fails to disappoint.

A judge has dropped the remaining charges against the Waco, TX “bikers”* who started a violent gun-battle between themselves and the police. 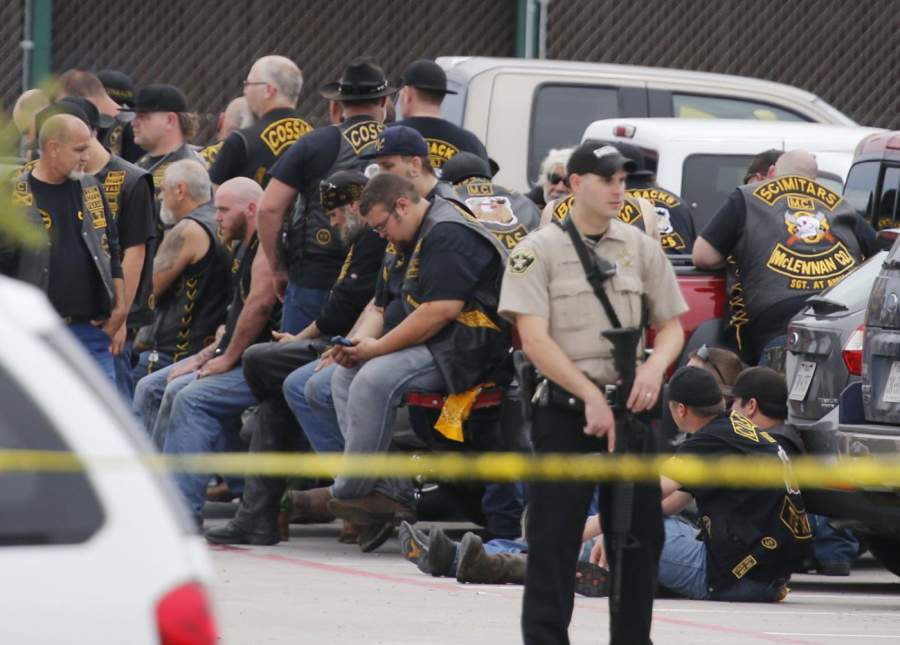 Is calling themselves “cossacks” cultural appropriation?

Well, that’s all done now, and justice seen to be done. I can remove the reminder from my calendar because there’ll be no more news. I guess that waiting nearly 4 years to kill the story was sufficient.

Meanwhile, the American justice system clings like a drowning man to the death penalty so that occasionally someone who can’t afford to buy their way out of the system, gets a lethal injection. [stderr] The US is a christian nation, of the biblically unforgiving kind, unless you’re white.

To be a bit fair, it sounds like the police and SWAT team did a fair job of screwing up the crime scene, and it’s possible or even likely that some of the casualties were “friendly” fire from cops and who knows who all else.

By the way I just noticed that the cop who is “guarding” all the bikers with his AR-15 in penis substitute pose – it’s not loaded. No clip in the housing. There’s a metaphor somewhere in there.

These are Texas cops. They’re lethal if you’re black but if you’re a big pasty-white guy you’re good to go. Even if you’ve just been in a gunfight with the SWAT team. Let’s let bygones be bygones.

* scare-quoted “bikers” – they’re biker cosplayers. The whole gun-battle sounds like a thug-LARP session between clubs of guys who should have resolved their differences at a bowling alley, or perhaps with Magic The Gathering.

Migrants » « Let Me Stake This Out